What Is a Glass Bubbler, Also Known as a Bubbler Pipe?

A bubbler is a single-piece water-pipe style device, typically made from glass. When you use one of these pipes, you benefit from a smoother hit. There is a lot more to marijuana than merely lighting a joint. Along with the thousands of strains available, various devices and accessories allow you to experience cannabis differently.

Rolling joints and blunts are the traditional methods of using weed. Bong hits also belong to the old-school, but there are new kids in town. Dabbing marijuana concentrates is one way to get very high. However, if you don’t want to mess around with nails and torches, a glass bubbler is an adequate substitute.

What Is a Glass Bubbler?

A bubbler is a cross of a water pipe and a bong. It features a bowl, stem, mouthpiece, and a water chamber, much like a bong. You can also purchase bubblers with a percolator. This is an extra water chamber that helps filter and cool the smoke.

While a bubbler and bong have similar features, the former resembles a one-piece water pipe.

Humankind has used the bong for millennia, and it comes from the Thai word baung. These first pipes were made from bamboo, and evidence of bong use stretches back to 400 BC, at least. Likewise, the humble pipe has been around for eons.

It isn’t easy to pinpoint the precise origin of the bubbler. However, the inventor likely wanted a portable version of a bong. Once glass blowing techniques were perfected in the mid-20th century, it didn’t take long for us to see the first glass bubbler.

If you are a novice, you might find the process of filling your bubbler with water tricky. The easiest way is to fill it through the bowl. We don’t recommend filling it through the narrow mouthpiece because it is hard to get the water in. Also, the shape of the mouthpiece provides a deceptive view of how much water is really in the bubbler.

There is an art to determining how much water can go into a bubbler. If there isn’t enough, it won’t filter the smoke and result in harsh lung hits. If it is too much, you can get stale hits, or else backsplash can become an issue. Ideally, you will fill the bubbler until half the stem is submerged. 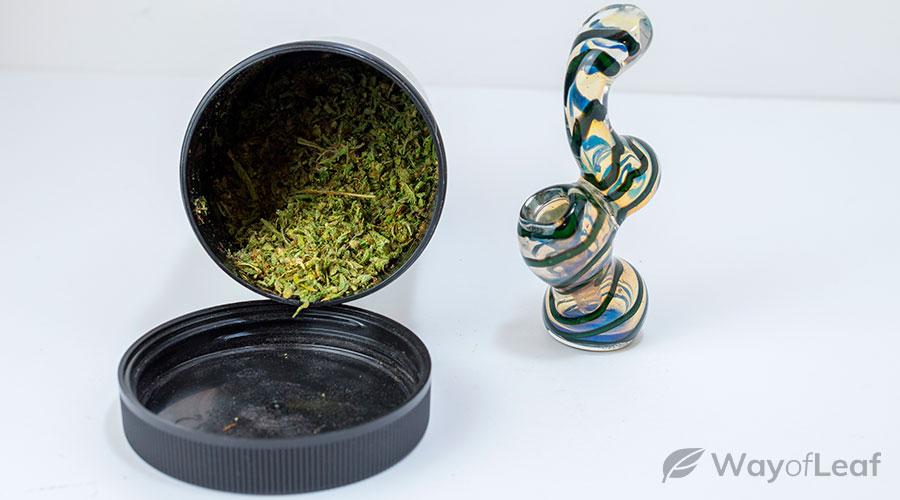 Once you have filled the bubbler to the right level, follow these steps:

Pros & Cons of Using a Bubbler

The best glass bongs for sale…

There is no shortage of variety when it comes to glass bubblers, although they all have the following in common:

Therefore, when looking at the wild and wonderful glass bubbler designs, remember that their goal is the same. They use water to filter the smoke and allow for smoother hits. Experienced smokers understand the difference between harsh hits and cool & smooth ones. Here are a few common types of glass bubblers:

Things to Consider When Choosing a Glass Bubbler

There is an impressive array of glass bubblers on the market. However, you can narrow down your search by focusing on the following:

When purchasing a glass bubbler, make sure you invest in one made from high-quality glass. Borosilicate glass is a popular material for the water pipe. Bubbler manufacturers use it because it is heat-tolerant, heavy, and extremely tough.

Occasionally, you may see a bubbler made from ‘scientific’ or ‘lab quality’ glass. This is usually a roundabout way of saying it is made from borosilicate glass.

Pretty much everything else boils down to preference. You may want a plainly-designed bubbler or one that looks as if Tommy Chong designed it while incredibly stoned. You can have deep or shallow bowls, long or short stems, or big/small water chambers.

As long as high-quality glass is involved, it should do the trick and last you for a long time in the bargain.

Best of all, you can easily find glass bubblers online for as little as $20. If you want something from the top-end of the market, expect to pay up to $200. While it seems like a lot of money, it is probably the equivalent of under an ounce of weed. Remember, your glass bubbler can give you years of high-quality smoking sessions. Therefore, it is worth investing in something substantial.

Incidentally, there are also wooden bubbler pipes on the market. Some people prefer wood because it is less fragile than glass. However, it is essential to note that the vapor produced by wooden bubblers is not as clean as what comes from a glass version. If you don’t care about this issue, look for a bubbler made from a hardwood such as rosewood or maple.

Related article
How Do Bongs Work? [Fully Explained for the Novice]

Should you be using one?

7
8 min read
Join The Discussion
TOC
Premium
Your subscription has ended
If you love cannabis and want to support our site, join WayofLeaf Premium today and unlock
Best of all, part of your membership fee will go towards supporting the fight to legalize cannabis.
Sign Up for WoL Premium
Not now
I already have an account
×
Log in to Your Premium Account