If you are relatively new to the world of marijuana, you may be confused by some of the terminologies. For example, a dab rig is a device that heats marijuana. The primary use of this piece of equipment is for consuming cannabis concentrates such as shatter or wax. It is a specially designed piece usually made from glass and consists of several parts and accessories, including a banger.

The primary use of a dab rig is for consuming cannabis concentrates such as shatter or wax.

A banger is a dish that holds the weed on the rig and is a form of nail. It usually is circular and made of glass, titanium, ceramic, or quartz. The banger holds the concentrate at the perfect temperature to release the terpenes and vaporize the material.

Why Use a Quartz Banger?

Titanium is a popular option for a banger. However, the metallic taste can leach into the concentrate and ruin the overall flavor. There are several advantages to using a quartz banger above other materials.

One advantage of cannabis concentrates is their significantly higher cannabinoid content. Another is the immense flavor you experience when inhaling the vapor. When you use a quartz banger at low heat and add a carb cap, the wax retains its terpenes. Therefore, you get to enjoy a superior flavor and aroma than you would if you were smoking that particular strain. Many believe that terpenes have potential health benefits, which is another bonus.

As long as you use your quartz banger correctly, it is among the easiest materials to clean. You may want to try consistent dabbing at lower temperatures. After finishing your session, use a paper towel or a cotton swab to clean. If you heat the surface to a very high temperature, the remaining concentrate will oxidize the quartz. Doing so can leave behind a dark, hard-to-clean residue.

Related article
The Complete Guide on Dabbing vs. Vaping E-Liquid

There are particular water pipes for concentrates that have too much airflow to allow for longer-lasting dabs. With a quartz banger, you can restrict the airflow, increase the glass’s overall function, and take advantage of the small air hole.

One disadvantage of glass or titanium bangers is that they don’t retain heat particularly well. The level of heat retention varies depending on the thickness of the quartz. However, it is a material that keeps heat in very well. All you need is a quartz banger with a minimum wall thickness of 3mm. The longer the banger stays warm, the more time you have to clean it with a cotton swab afterward.

Other materials have issues with durability. For example, glass bangers can shatter if overheated and ceramic breaks when heated in the same spot regularly. You can heat it to a very high temperature with quartz, but it will never break or shatter. This is true even when you heat it continuously in the same spot. You can even clean a dirty quartz banger by heating it until it is red hot to remove any residue!

When you go shopping for a quartz banger, the long list of options may confuse you. Here is a quick guide to the most common types. 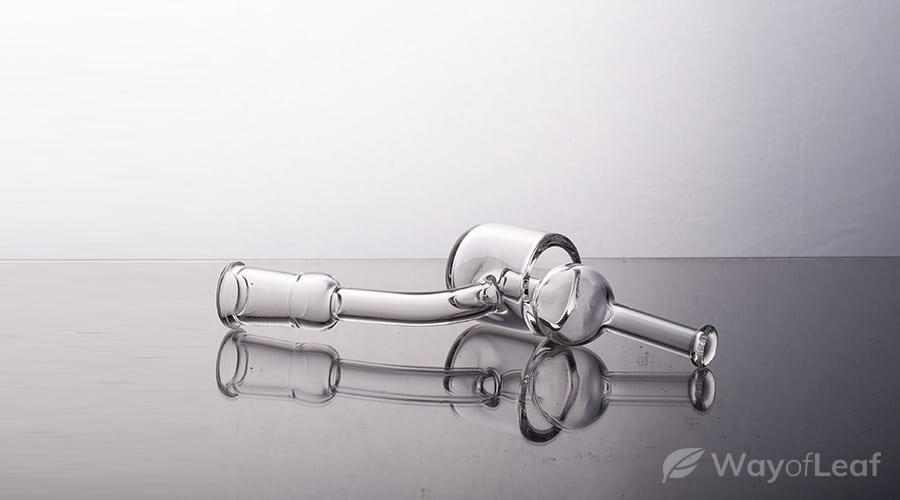 This option has thin walls, so it takes less heat to reach the right dabbing temperature and also cools down quickly. The dish diameter typically ranges from 14mm to 40mm. The joint sizes usually are 10mm, 14mm, and 19mm, male and female.

This type of banger is considered an upgrade on the standard option. A thermal quartz banger is designed to let you dab at an extremely low temperature. As a result, it preserves more of the terpenes. It retains heat longer due to its increased mass, and it works brilliantly.

A Flat Top with an insert cup is a relatively new design that makes it easier to clean. You can use almost any type of carb cap to boost flavor and vaporization. The banger cup insert enables you to heat the banger and fill the insert with the concentrate. Then, you drop it into the flat top banger. Alternatively, heat the insert and use a pair of tweezers to drop it into the banger.

If you heat your banger as usual and drop the insert cup into it filled with concentrate, you will benefit from a fantastic flavor and a rapid rate of vaporization.

This design involves a quartz heat sink at the bottom of the bucket. As a result, it gives the banger more mass. The chunk of fused quartz at the bottom retains heat for an extremely long time, which means longer dabbing sessions! The sink creates extra surface area, and the heated canal between it and the banger’s wall means you benefit from the right dabbing temperature for longer.

There are several methods of using your dabbing rig, and we cover three of them below.

Hot Dabbing is the method to use if you want large dabs. The higher temperature means that fats and lipids get burned off, as do the terpenes and cannabinoids. However, you may also develop a coughing fit. While you can dab several grams using this tactic, we don’t recommend it. Here it is in case you want to give it a try:

With practice, you’ll find that dabbing with a quartz banger is one of the best ways to enjoy cannabis concentrates. We have mentioned a carb cap a few times in this article. It is a small lid that you add on top to restrict airflow into the banger. The result is cooler vapor, and more vapor enters the lungs rather than air. It is a highly recommended dabbing accessory.

With practice, you’ll find that dabbing with a quartz banger is one of the best ways to enjoy cannabis concentrates.

Although quartz bangers have plenty of advantages over other materials, not all bangers are created equal. While a high-quality quartz banger will enhance your dabbing experience, a low-quality version could ruin it.

When it comes to finding the best options, look for brands such as Toro, Dark Crystal, EvanShore, and Quave. These are major players in the industry and are companies that have earned their reputation. One final note: Concentrates are incredibly potent, so please dab responsibly!

The Best Dab Nail: Should You Choose Ceramic, Quartz, Titanium

Because 420 time is important!

These Are the Best Torches for Dabbing [2022 Update]

Our top torches to use at home or on the go