There are a wide variety of ways to consume cannabis. These include edibles, marijuana flower, tinctures, THC liquid, and topicals. However, evidence exists that suggests smoking cannabis isn’t especially healthy. The combustion of the plant material results in the release of numerous carcinogenic substances.

Vaping recently hit the headlines for the wrong reasons. Black-market THC juice resulted in dozens of deaths and thousands of hospitalizations. And while edibles are convenient, they can take up to two hours to affect.

Fortunately for cannabis users, there is a new way of consuming the plant. Cannabis inhalers have quickly become popular as their effects are felt quickly. They also provide a cleaner and purer hit of cannabinoids. Read on to learn more about this exciting device.

What Are Cannabis Inhalers?

They are devices that look exactly like typical inhalers used to help with asthma. The obvious difference is that cannabis inhalers release a vapor filled with dozens of cannabinoids and terpenes. This device is potentially extremely helpful for individuals with respiratory issues looking to use MMJ. Such users should avoid smoking or vaporizing marijuana.

Cannabis inhalers are potentially extremely helpful for individuals with respiratory issues looking to use MMJ.

A cannabis inhaler provides you with pre-measured amounts of vapor every time you use it. This enables you to measure how much THC and CBD you consume carefully.

How Does a Cannabis Inhaler Work?

Understanding how this device works involves a brief look at how the human lungs operate. Our lungs consist of millions of alveoli (tiny air sacs). These enable gas exchange. Whenever we breathe in, oxygen is absorbed through the air sacs and goes into the bloodstream. When we breathe out, the air sacs contract to expel CO2 from our bloodstream. The carbon dioxide leaves the body via the nose or mouth.

When you use a cannabis inhaler, the cannabinoids go straight to the lungs. They enter the bloodstream via almost the same route as oxygen when it enters the body. As a result, the inhaler offers an extremely high rate of bioavailability. This relates to the percentage of a compound that makes it to the bloodstream and has an active effect.

We’ll further explore the benefits of marijuana inhalers in the next section. There are certainly a growing number of options on the market. Such brands benefit from the increasing level of research into the efficacy of cannabis inhalers. 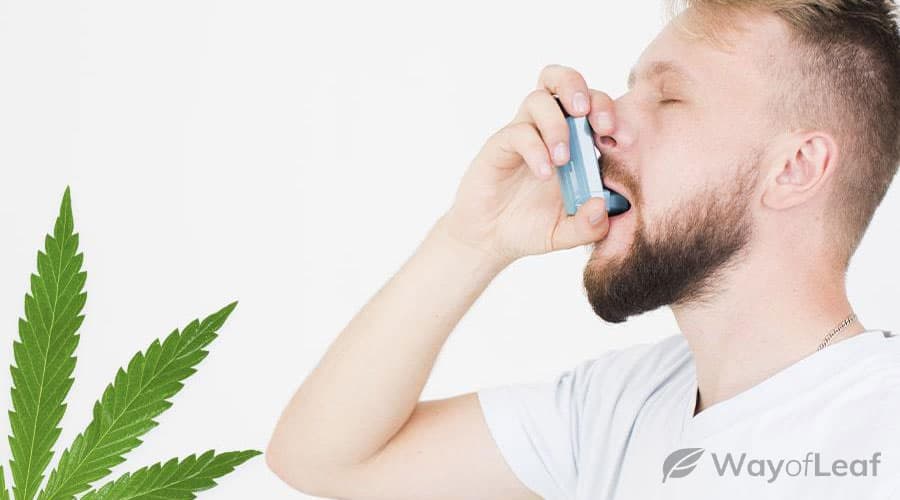 It is believed that dosing THC and CBD in precise doses in inhalers can assist MMJ patients with conditions such as COPD and asthma. Individuals with these issues are unable to smoke marijuana and should also avoid vaping it.

Is THC a Bronchodilator?

There is evidence that THC could act as a bronchodilator, which is extremely important when helping asthma patients. Asthma is a potentially dangerous lung disease that can narrow and inflame airways. It can result in wheezing, tightness in the chest, and shortness of breath. Bronchodilators can relax the muscle bands that tighten around the airways, thus relieving some asthma symptoms.

A study published in 2018 looked at the case for CB1 receptors as a target for bronchodilator therapy. The researchers wrote that the issue warrants further investigation. They also recommended beginning clinical trials to learn more. It is important to note that THC acts directly on the CB1 receptor.

What’s remarkable is that research exists from decades ago pushing the case for THC as a bronchodilator. A study in the New England Journal of Medicine in 1973 found that inhaled marijuana caused bronchodilation. The researchers wrote that marijuana activates the CB1 receptor.

Activation of this particular receptor could result in a decrease in pain. At the time, the researchers also noted that particulate matter from smoke could be a lung irritant. Various studies have proven that smoking marijuana or cigarettes can lead to respiratory difficulties. However, using a cannabis inhaler could enable you to consume cannabinoids without the associated effects on the lungs.

What Are the Benefits of Cannabis Inhalers?

Leaving aside the possible medical benefits, there are many more reasons to consider a marijuana inhaler. This is the case even if you don’t have a respiratory condition, although individuals in this category will certainly derive more benefits.

Cannabis inhalers have a significantly higher bioavailability than other marijuana consumption methods. For reference, an intravenous injection offers the highest bioavailability rate at 100%.

In contrast, a study published in 2005 found that smoked cannabis had a THC bioavailability of 30%. Orally consumed THC had an absorption rate of between 4% and 20%.

Using a cannabis inhaler means you benefit from a higher intake of cannabinoids. As an inhaler can deliver cannabinoids directly to the bloodstream, it provides a far higher absorption rate than oral consumption.

The closest device to an inhaler in this regard is a vaporizer. A study published in PLoS One in 2016 looked at the performance of cannabis vaporizers. It tested four devices and found that THC and CBD recoveries ranged from 51.4% to 82.7%. For the record, the Arizer Solo vaporizer performed the best.

Even for individuals with no respiratory issues, smoking cannabis can cause severe irritation of the lungs. Combusting the plant matter also produces cancer-causing agents.

There is also still some concern regarding the contents of vape juice. A cannabis inhaler helps you avoid all of these potential problems. It doesn’t produce carcinogens and offers a pleasant and fast-acting experience.

Cannabis inhalers come with standardized doses. For instance, the N Fuzed Inhaler has a total of 250mg of THC. It ensures you get up to 50 puffs of 5mg THC. Bear in mind that 5mg of the intoxicating cannabinoid is enough for many users to feel an effect.

Unlike smoked marijuana, there is no tell-tale odor to worry about with a cannabis inhaler. There is also no smoke, and you can quickly use it on the go with no one noticing. We advise you to avoid brands with stand-out packaging if you’re hoping to benefit from privacy.

Although there are slight variations between brands, you can use most cannabis inhalers in the same fashion. Here’s what to do:

Individuals living with asthma are already familiar with the above instructions.

If you want to use MMJ but have a respiratory problem, a cannabis inhaler could prove incredibly useful. It is a means of consuming marijuana’s cannabinoids without irritating the lungs. It also has an extremely high bioavailability level, which means your body absorbs a significant percentage of the cannabinoids.

As it provides small, pre-measured doses of THC, a cannabis inhaler is also useful for microdosing.

As it provides small, pre-measured doses of THC, a cannabis inhaler is also useful for microdosing. It is a small, discreet device that doesn’t produce smoke or a noticeable odor. Research also suggests that THC could act as a bronchodilator. As a result, patients with asthma might find that a cannabis inhaler can help alleviate certain symptoms. However, we urge you to speak to a doctor before using any form of marijuana.