Morning sickness has become one of the most dreaded side effects of pregnancy. It’s unpredictability, yet constant prevalence, has led many women to seek relief from its discomfort. But most importantly, every expectant mother’s first concern is for the safety and wellbeing of their unborn child.

So, is CBD oil a viable option for easing morning sickness symptoms? And what are the risks associated with using it? Find out in this overview.

What Is Morning Sickness?

According to recent studies, between 70 – 80% of women experience morning sickness during pregnancy. This equates to between 4,000,000 and 350,000 women each year in Canada and the United States alone. So it’s surprising that its cause still remains contentious within the medical community.

Many medical professionals believe that morning sickness is the body’s reaction to excess amounts of a hormone called human chorionic gonadotropin (hCG). During the first trimester of pregnancy, the placenta forms and produces hCG in order to maintain a healthy pregnancy. However, by doing so, hCG also stimulates the maternal ovaries to secrete estrogen. And it is this which can cause feelings of nausea.

Morning sickness typically occurs from the 6th week of pregnancy until the 12th week, when high levels of hCG are produced in the body. Despite the name, morning sickness has no temporal preference and can actually happen during any time of the day.

For most pregnant women, morning sickness can be described as feelings of nausea, which may or may not result in physical vomiting. However, other less-known symptoms include:

What’s most curious about morning sickness is that women can develop triggers to these symptoms. From smelling cat food to the sound of traffic, these triggers can be unusual and unique. Some of the most common triggers include;

Many of these factors are impossible to avoid in day to day life. In addition, lots of women experience no triggers at all, making morning sickness feel largely uncontrollable.

Similar to morning sickness, many studies highlight that a rapid increase in the hormone hCG contributes to HG. Factors such as estrogen levels and progesterone early in pregnancy may also contribute to the condition. However, much like morning sickness, the exact cause remains ambiguous.

Severe HG may result in hospitalization. So, individuals experiencing any extreme morning sickness symptoms should visit a doctor immediately.

Unfortunately, there are no steadfast remedies for combating morning sickness. This is mostly due to differing hormone levels, symptoms, and triggers in pregnant women. However, there are a variety of lifestyle changes pregnant women often use to dispel symptoms. These include:

It’s worth noting that antiemetic or ginger supplements should always come at the recommendation of a doctor.

With so many suggested remedies, naturally, CBD has become a discussed alternative. But how could it help?

Could CBD Be Beneficial for Morning Sickness?

Could CBD be an alternative? Well, cannabidiol has long been considered as a possible antiemetic. Some studies have found that nausea and vomiting can be suppressed through the manipulation of the endocannabinoid system. This biological system is made up of cannabinoid receptors that interact with different chemical compounds, including CBD. One group of receptors, in the somatodendritic region, may be the key to minimizing feels of nausea. 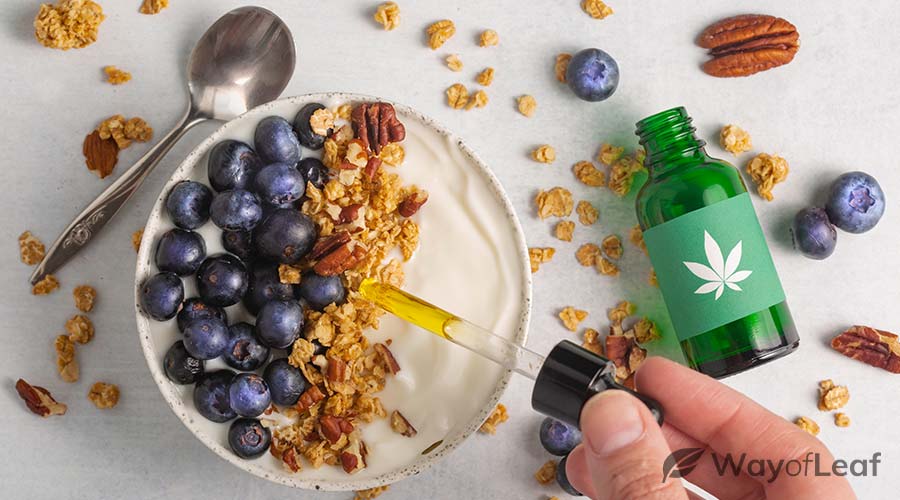 There’s no denying that experiencing severe morning sickness symptoms can induce a lot of stress for an expecting mother. This is never a good combination. However, some medical research demonstrates CBD decreasing levels of anxiety.

Studies like this one show a promising correlation between CBD and anxiety disorders, not just by improving short-term anti-compulsive actions but long-term anxiogenic effects of stress. This could be due to cannabidiol preventing the overstimulation of receptors within the endocannabinoid system. However, this is still based on theory.

CBD seems like it could be beneficial for many morning sickness symptoms. But it’s worth noting that there are very few studies that look at the relationship between the two directly.

Is It Safe to Use CBD Oil for Morning Sickness?

To make a long answer short, nobody knows yet. While CBD is considered a safe and effective remedy for many conditions and symptoms, it remains a contentious choice for pregnant women. You’ll find that many medical professionals, including physicians and gynecologists, will advise against using CBD. This is in large due to a lack of research, rather than any known dangers.

You may also find a conservative approach from CBD distributors themselves, with pregnancy warnings on oil and topical labels. If you do want to use CBD, it’s essential to consider where you are buying it. Whether you want oils or topicals, always buy from a transparent and trusted brand. Similarly, it’s a good idea for you to check full ingredient lists before purchasing a product, to ensure you aren’t consuming any harmful or unnecessary chemicals.

While often a happy process, pregnancy can create a lot of physical and emotional stress for an expecting mother. And morning sickness is just one example of this.

In theory, CBD could be used as an antiemetic to prevent or subdue morning sickness symptoms, specifically nausea. However, there is simply not enough long-term data to determine accurate benefits and risks. Understandably medical professionals are taking a strict stance on CBD, especially with an unborn life involved.

If you remain curious about using CBD while pregnant, it’s essential to consult with your physician or doctor first.