The marijuana concentrates market has the momentum of a runaway train, and there is no Casey Jones type individual available to slow it down! According to a report released by ArcView Market Research, the legal cannabis concentrates market was worth around $3 billion in 2018. By 2022, that figure is set to skyrocket to over $8 billion.

You can read our articles on concentrates to learn more about them, but suffice to say, it is an all-encompassing term which relates to products such as rosin, shatter, budder, butane hash oil, and distillate. An estimated 60% of the concentrates market involves pre-filled vape cartridges.

Vaping is seen as a safer alternative to smoking weed because it doesn’t involve combustion. Instead, the vape pen heats the flower or concentrate to a specific temperature and causes the liquid to turn into vapor. At that point, users can inhale the vapor and get the benefit of cannabinoids, terpenes, and flavonoids without lung irritation.

Vape pens have become incredibly popular. According to a 2017 Eaze consumer report, over 70% of Millennial consumers had purchased at least one.

As is the case with any popular product, a litany of fake vape cartridges has flooded the market in recent times as unscrupulous individuals attempt to make a quick buck from a growing market. Aside from ripping people off, the main issue with fake cartridges is one of safety.

First and foremost, real vape cartridges contain high-quality concentrate oil with a THC content of over 70% in some cases. These liquids contain terpenes, cannabinoids, flavonoids, and come from organically grown marijuana or hemp. As a result, there are no heavy metals, toxins, pesticides, or insecticides in your oil.

Since the beginning of 2019 in the state of California, all legal vape cartridges are tested for heavy metals. After a few months of testing, only around 1 in 200 cartridges fail. It is great that there is rigorous testing in place, but as you can guess, fake cartridges have no such hoops to jump through.

If you end up with a fake cartridge, it could contain practically anything. As well as purchasing liquid with a low cannabinoid content, you could be inhaling substances that are extremely bad for your health. The prefilled liquid you think is hash oil is placed in convincing looking packages and sold on marketplaces of dubious quality. Practically all black market vape cartridges will contain several types of pesticides and heavy metals.

Of course, it isn’t just the cartridges that are fake. There is a long line of fake vape pens on offer as well. Counterfeit pens are usually made with batteries that don’t function properly or are downright dangerous. These batteries may fail to heat the liquid, or else the amount of vapor produced is negligible. If the heating element overheats, the liquid combusts instead of vaporizing.

In other cases, the low-grade materials surrounding the cartridge releases poisonous fumes. On occasion, the pens leak, and if you’re really unlucky, the pen could explode and cause serious injury.

According to several well-known vape pen makers, counterfeits have been flooding the market for at least six years. If you believe that avoiding the black market keeps you safe, think again. Even in California, unlicensed stores are selling fake vape cartridges and pens by the hundred. Some consumers are aware the products are fake (the low price is a clue), but don’t seem to know how dangerous fake vape cartridges are.

In the eyes of these customers, it is akin to purchasing a fake designer handbag. Why pay $1,000 for Gucci when you can get a knock-off bag for $40? The problem here should be obvious. When you buy a fake bag, the worst that will happen is that the handle breaks or the zip doesn’t function properly. When you buy fake vape cartridges, you could seriously damage your health. Last time we checked, buying a fake handbag didn’t result in the inhalation of carcinogenic substances!

Before we delve any deeper, there are a couple of things to watch out for immediately according to popular YouTube marijuana vlogger, Erick Khan. First and foremost, there is a VERY high percentage chance that you have bought a fake cartridge if you live in a state where weed is illegal. 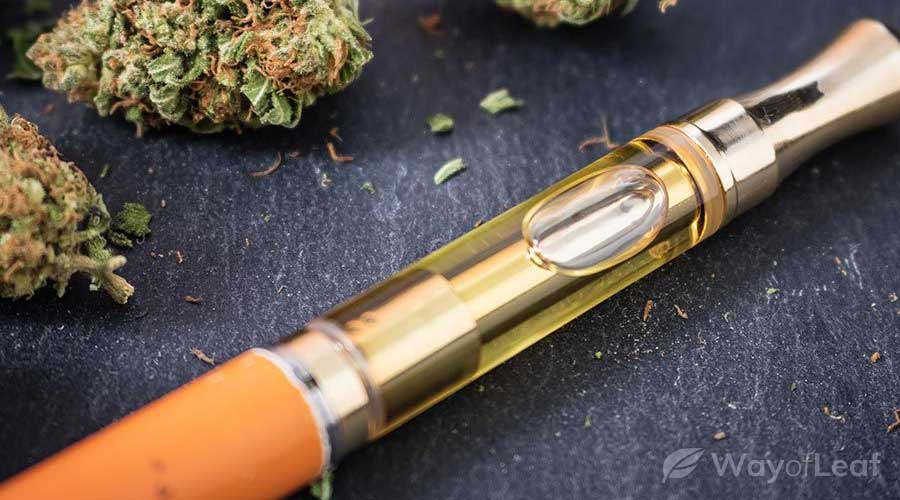 Secondly, if you’re paying less than $50 per gram of concentrate, it is virtually certain that you have a counterfeit cartridge. Bear in mind that cannabis concentrates have an extremely high THC or CBD content. Next, add in the taxes that suppliers and sellers have to pay. Realistically, you are looking at $80 per gram when buying real vape cartridges.

One of the easiest ways to fool a consumer is to display a fake product in authentic looking packaging. Brands such as Dank Vapes, Heavy Hitters, and Brass Knuckles, have a serious counterfeiting issue to contend with. You can go to Amazon and purchase decent packaging for less than $0.10 per box!

Keep an eye out for packages with popular cartoon or video game characters on them. For example, there are Mario Kart packages that look real, but there is no reliable information on any of these brands being real or authentic.

On rare occasions, you may get lucky and find that the counterfeiters have made a mistake. One of the most common flaws involves misspelling. We have seen fake cartridges spell the word hybrid ‘hybird’ for example! If you have any suspicions whatsoever and believe there is something ‘off’ about the packaging, steer clear.

If that isn’t bad enough, you can even buy empty cartridges for around $0.60 apiece. Now that you have legitimate-looking packaging and empty cartridges, you can put whatever you like in them.

You will commonly see images of faux brands on Instagram and other social media sites. Many of these photos look professional, but once again, it is all style and zero substance. There are pictures depicting the cartridges filled with what appears to be cannabis oil.

These fraudsters either add fake data on the cannabinoid content or none at all. When fake cartridges are legitimately lab tested, they typically contain a variety of pesticides in worrying quantities. Meanwhile, people are buying these cartridges for $25 each in the belief they are receiving a bargain.

It is VERY hard to ascertain the quality of oil from Instagram images. It is easier when you have it in your possession, but if you have already bought it at that point you can forget about a refund! In general, the oil density should be thick with a strong, clear gold coloring. Cartridges with orange or dark colored oil are extremely likely to be faked.

If I Bought a Fake Cartridge – What the Hell Have I Been Smoking?

Your guess is as good as ours sadly! You could honestly be smoking one of a dozen things. Take a look at the fake cigarette market as an extreme example. There are reports of these counterfeit cigs containing arsenic, dead flies, and human excrement. While you hopefully won’t be so unlucky, there is no earthly way of knowing unless you lab test the substance in the cartridges.

In most cases, you end up buying oil that is nowhere near as potent as the real thing. In all likelihood, it will also contain pesticides, heavy metals, and other impurities that will damage your health. The problem with flavored cartridges is that they might actually taste good, so you have no idea whether they are real or not.

The thing is, pesticides are depicted as the devil, but up to 90% of Americans have them or their byproducts in their bodies. Pesticides are used on crops, such as marijuana plants, to keep bugs away. Legitimate companies have special processes to get rid of the pesticides, but this equipment costs money that con artists are not going to spend! Even worse, when you concentrate marijuana, you also concentrate whatever pesticides are in the plant.

The very first thing you must do is ensure that you are buying a dispensary tested product. Licensed, legal dispensaries have reputations to uphold, so they only deal with trusted suppliers.

Secondly, your cartridge is possibly fake if the packaging displays the THC content. Legitimate brands place this information on separate stickers for the most part. At the very least, the packaging is fake which makes it very likely that the oil is too. Check for spelling and grammatical mistakes as well.

Fourthly, if the vape cartridge seems incredibly cheap and too good to be true, it absolutely is! Real concentrate is expensive. Finally, if there is no information about the alleged ‘brand,’ don’t risk your health seeking a cheap high.

For the record, smoking fake vape cartridges could make you severely ill. Symptoms of mild or acute poisoning include weakness, dizziness, fatigue, headaches, loss of appetite, diarrhea, and joint soreness among other things.

If you have any doubt as to the legitimacy of a vape cartridge, don’t buy it! Avoid disreputable online marketplaces known for selling dud gear, and if possible, stick with a handful of known and trusted online retailers, or your local licensed dispensary. When your health is at stake, it simply isn’t worth risking it for the sake of a few bucks. You end up with a crappy vape cartridge in any case and a high a far cry away from what you were anticipating.

How to Clean Your Vape Pen in FIVE Easy Steps

According to Herodotus, humans have vaped cannabis for at least 2,500 years. He wrote about how the Scythians used hot stones to help vaporize marijuana seeds, and how they inhaled the vapor and began dancing around wildly. Things are a little more sophisticated in the modern era as there are now countless advanced vaporizers capable […]

Storz and Bickel: A Comprehensive Guide to All Their Vapes

Top Product Overview The revolutionary Volcano Classic vaporizer is made with longevity in mind. Having been expertly crafted in Germany, this device is one to add to the Vape Hall of Fame. Warranty 3 years Heating type Convection Battery type/replaceable Plug-in charge / No Recharge time N/A Dimensions 7.8"w7.8"l Bowl size N/A Temp settings Manual […]