It’s touted for its variety of potential health benefits, including the anxiolytic (anti-anxiety), anti-pain, neuroprotective, and antioxidant effects. It is also famous for its ability to help in the treatment of seizures, depression, insomnia and more. But one potential health benefit we don’t seem to hear much about is the antifungal effects of CBD.

A fungus is a microorganism that can be almost anywhere; in the water we drink, the air we breathe, our homes, and even in our bodies. The most common fungi include mildew, mold, and mushrooms.

Fungal infections aren’t something that most people want to talk about, but when they occur, they can be very uncomfortable. They are a major health challenge and can range from annoying to deadly. While most people opt for pharmaceuticals to treat fungal infections, others have found that CBD oil has helped relieve the itchiness and discomfort associated with the condition.

Research suggests that CBD has antifungal properties, which backs up these claims. Fungal infections are an embarrassing topic and don’t get discussed as often as they should. So today, we are going to discuss whether CBD oil is antifungal.

What Are Fungal Infections?

A fungal infection is a skin disease caused by a fungus. Like many microbes, there are harmful fungi and helpful fungi. When harmful fungi invade the body, they’re often difficult to kill because they can easily survive in the environment and re-infect the person trying to get better.

If you’ve ever suffered from athlete’s foot or a yeast infection, fungus is to blame. Jock itch and ringworm are other common types of fungal infections. They aren’t deadly, but are very uncomfortable and can be difficult to treat. Fungal meningitis and other fungal infections that affect the bloodstream aren’t as common but can be fatal without proper treatment.

The symptoms of fungal infections depend on the type. The most common symptoms include:

Unlike bacteria that are prokaryotes and have no nuclei, fungi are eukaryotes. They have a DNA-containing nucleus, like all plants and animals. Unlike bacteria, which are easy to treat, it’s difficult to treat fungi without harming or killing human cells. It’s also worth noting that a compound known as ergosterol is necessary for maintaining the structure of the cell membrane of fungi.

This explains why many pharmaceutical antifungal drugs work by hindering the production of ergosterol, which microbes need. The aim is to stop the cell membranes of fungi from forming properly, thereby destroying the fungal infection without harming the human host.

There are indications that CBD has some antifungal properties which are enhanced by caryophyllene oxide – an extremely potent antifungal.

A 2011 study published in the British Journal of Pharmacology reported that certain cannabinoids, such as CBD, CBG, and CBC, have some antifungal effects. The study noted that these cannabinoids may have the ability to boost the effects of caryophyllene oxide. 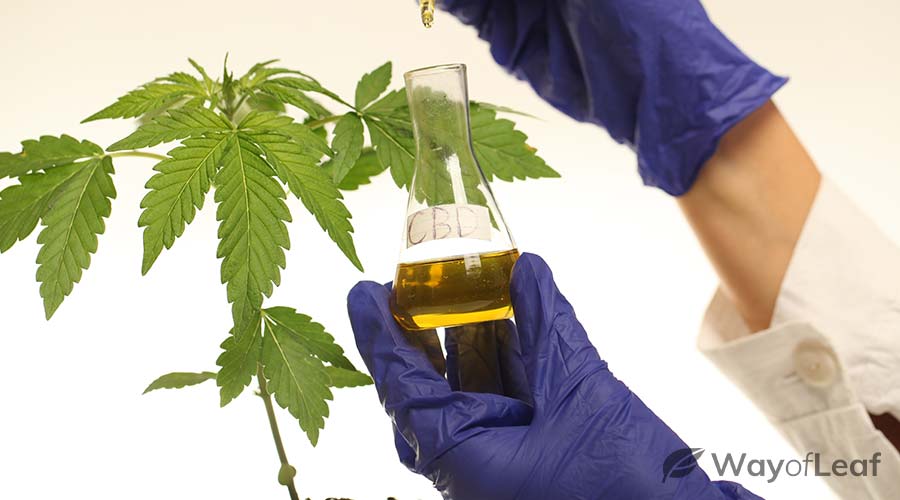 Caryophyllene oxide is the oxidized form of beta-caryophyllene – a primary terpene found in cannabis, pepper, basil, rosemary, and hops. Terpenes are similar to essential oils and give cannabis plants their distinctive flavors and aromas. According to a 2018 study published in the Cannabis and Cannabinoid Research Journal, many terpenes have been found to possess antifungal properties in vitro.

In one study, researchers reported that essential oils that contain alpha-pinene as well as delta 3 carene (also present in cannabis), have powerful antifungal properties.

Another study reported that beta-caryophyllene has potent antifungal properties. While these studies aren’t specific to CBD, the results indicate that many of the compounds found in cannabis have a variety of therapeutic benefits, including as a potential fungicide.

Moreover, CBD has anti-inflammatory properties, which may help with some of the symptoms of fungal infections, like swelling, heat, and redness.

Currently, the effectiveness of CBD in treating fungi is not fully understood because very little research has been done on the subject. Nonetheless, scientists have observed similarities between pharmaceutical agents and CBD with antifungal properties.

How CBD Oil Works as an Antifungal

Fungi cells are eukaryotic cells and have membranes that protect the nuclei. Antifungals destroy fungal cells by demolishing the cell membrane through hindering the production of ergosterol – active lipids that feed fungi cells. With no ergosterol, fungi cells die off and don’t cause any harm to surrounding cells.

The core of a cannabinoid is composed of one hydrogen atom and one oxygen atom. These types of compounds attract other compounds that contain oxygen molecules. Once this happens, a chemical reaction known as oxidation occurs, and the compounds bind. When CBD oxidizes fungal cells they can no longer multiply or grow.

This is because fungal cells aren’t able to produce ergosterol, which is essential for growth and survival. The process of CBD oxidizing and destroying the fungal cells is how it displays antifungal properties.

How CBD Oil Compares to Alternative Treatments for Fungus

Conventional antifungal medications are known to have some side effects, especially when taken orally or internally. Some of these include abdominal pain, rashes, diarrhea, flatulence, and indigestion. Typically, these side effects are mild and only last for a short time.

In some cases, antifungal medicines may cause severe side effects. They include:

For those who are after a more natural and safer remedy, CBD may provide relief without the side effects that we typically associate with conventional antifungals.

According to a 2017 study published in the Cannabis and Cannabinoid Research journal, CBD may have a better side effect profile in comparison to other drugs. Therefore, most people consider CBD generally safe to use.

Final Thoughts on CBD as an Antifungal

Many scientists agree that CBD is not only an effective way to treat fungi, but it’s also a safer option. This is since it doesn’t have adverse side effects like the traditional medications used to treat fungi.

If you do a quick internet search, you will find numerous anecdotal reports of people who have successfully used CBD to treat fungal infections. That said, more research should be done on the subject. There is currently very little scientific evidence to back up claims that CBD oil is antifungal.

If you are interested in using CBD oil as an antifungal medication, choose a full-spectrum CBD product that contains all the beneficial terpenes and other cannabinoids. The findings we’ve discussed are largely related to cannabinoids and terpenes as a whole, and not the use of CBD on its own (as an isolate).

Can CBD Oil Cause Itching? [Explained]

CBD oil for your furry friend

Does CBD Oil Interact with Prednisone?

Is it safe to take them together?

What Is the Best CBD Oil Dosage for Dogs? [ANSWERED]

How Long Does CBD Stay in Your System? [Answered]

The Shelf Life of CBD Oil: How Long Does it Last?

How long does it last?

15
10 min read
Join The Discussion
TOC
Premium
Your subscription has ended
If you love cannabis and want to support our site, join WayofLeaf Premium today and unlock
Best of all, part of your membership fee will go towards supporting the fight to legalize cannabis.
Sign Up for WoL Premium
Not now
I already have an account
×
Log in to Your Premium Account