If the only cannabinoids that you’ve heard of are THC and CBD, then you have a little catching up to do. They are only two of the 113 identified compounds in marijuana. There is a ‘Big Six’ list of the most researched cannabinoids.  These include the two best known that we have just mentioned, along with CBN, CBG, THCV. The other is the one we are focusing on in this article, Cannabichromene, better known as CBC.

Research into cannabinoids is fascinating because we learn more about how they interact with the body’s endocannabinoid system (ECS). So, what are cannabinoids? Well, they are a diverse class of chemicals that result in an enormous range of effects associated with cannabis. THC and CBD are known for their health benefits. However, other cannabinoids such as CBC also act on the ECS. This interaction between cannabinoids and cannabinoid receptors promotes homeostasis or balance within your body.

Although it’s one of the Big Six, few know that CBC exists, let alone about its effects on the body. It was first discovered in 1966 and is one of the cannabis and hemp plant’s naturally occurring phytocannabinoids.

It is non-intoxicating, just like CBD, and believe it or not, is the second most prominent cannabinoid found in weed. Only THC is more prevalent. This discovery was made in a 1975 study by Holley, Hadley, and Turner.

In some cases, CBC could make up as much as 64% of a plant’s cannabinoid profile. However, we often select today’s plants for high THC content. Therefore, very few of them contain a high CBC content.

In terms of function, CBC has a few similarities to both THC and CBD. Like the two best-known cannabinoids, CBC develops through enzymatic conversion of the precursor CBG (cannabigerol). CBGA (cannabigerolic acid, which decarboxylates to CBG) reacts with enzymes in one of the plant’s glandular trichomes. The resulting reaction forms CBCA (cannabichromene acid), which then decarboxylates to CBC. Decarboxylation is the scientific term for “a chemical reaction that removes a carboxyl group and releases carbon dioxide.”

What’s the Difference Between CBC & Other Cannabinoids? 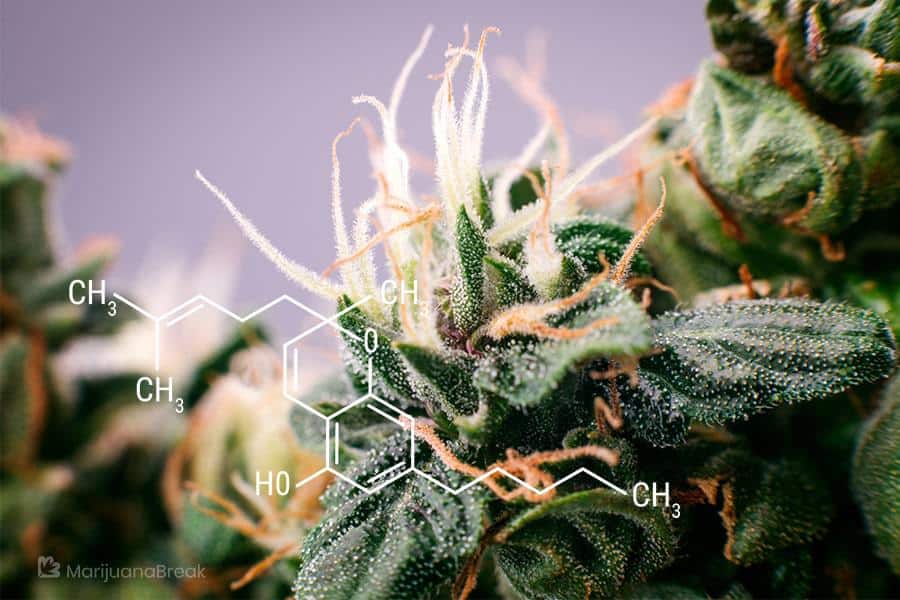 If the molecular formula C21H30O2 sounds familiar to you, you’re right (and also a science nerd!). This is the chemical formula of THC, CBD, and CBC. The interesting thing to note is that the atoms within the molecule have slightly different arrangements.

While several cannabinoids have the same formula, the slight alterations in structure ensure they act in different ways. For instance, THC is different from CBC and CBD because of its ability to bind to the CB1 receptors. This helps to produce the famous psychoactive effect associated with smoking weed.

Activation of these receptors increases the level of endocannabinoids in your body. An example of this is an increase in the production of anandamide, which is known as the bliss molecule.

CBC achieves this by interfering with the processes that tend to degrade these receptors. CBC enhances the receptor activity of cannabinoids that occur naturally in cannabis, thereby indirectly activating the body’s cannabinoid receptors.

In contrast, THC and other psychoactive compounds directly bind to and impact their respective receptors, particularly CB1 and CB2.

What is CBC Used For?

CBC has several benefits as a standalone cannabinoid. However, research suggests that it is most effective when working with other cannabinoids due to the entourage effect. The idea of the entourage effect is that individual cannabinoids offer more as a group than they do by themselves. For example, THC and CBD combine well together. CBD in marijuana works to prevent the intoxication caused by THC.

CBC possesses many of the same therapeutic effects associated with CBD. Also, as it is non-intoxicating, it makes for an exciting alternative. Studies show that CBC could help with everything from chronic pain to acne!

A 2011 study by Maione et al. found that CBC was effective in blocking the pain associated with collagen-induced osteoarthritis. Like many other cannabinoids, CBC’s effect on inflammation is very different to that of NSAIDs.

A 2010 study by DeLong et al. also produced some interesting findings. The study showed that when CBC combined with THC, it provided an entourage effect. This led to a far greater anti-inflammatory response than using either cannabinoid alone.

In the study, the research team analyzed the effects of CBC on paw edema. They discovered that the cannabinoid reduced overall swelling. Interestingly, the effect happened independently of the CB receptors. This is because antagonists prevented THC from working in the same way, but did not block CBC.

While CBC can’t transform a dunce into a genius, it does encourage neurogenesis. That is, according to one study from 2013 by Shinjyo and Di Marzo. The duo analyzed the effects of neural stem progenitor cells (NSPCs) of adult mice outside the body. They observed that these particular cells differentiate into numerous other cells, which helps brain growth and recovery. Results also showed that CBC improved the function of NSPCs.

Why is this significant? Well, one of the cells that NSPCs differentiate into is called astroglial cells. These cells are crucial for maintaining homeostasis in the brain. They perform an array of functions, such as providing a defense against oxidative stress and neurotransmitter direction. Oxidative stress, toxicity, and inflammation create neurological conditions such as Alzheimer’s disease. Therefore, in theory, the presence of CBC improves the viability of NSPCs. These NSPCs then differentiate into astroglial cells, which can counteract the issues that lead to neurological diseases. Phew… are you overwhelmed yet!?

For a long time, we’ve only heard about how THC and CBD can help with anxiety disorders and depression. However, it seems as if CBC is capable of a similar positive impact. A 2010 study by El-Alfy et al., showed that rats performed better on stress tests after receiving CBC. Chronic stress is known to be one of the major trigger factors for depression. It also appears that CBC works best for depression when combined with THC and CBD.

It seems odd, but much of the best CBC research occurred in the 1980s. A study published in 1981 by Turner and Elsohly found that CBC possessed impressive antibacterial properties. CBC helped fight a variety of gram-negative and gram-positive bacteria, such as staph and E. coli.

A more recent study, by scientists from Italy and the UK in 2008, found that CBC and other cannabinoids were at least as effective against MRSA as were powerful medications like Vancomycin. Moreover, the cannabinoids did not punish you with a host of adverse side effects.

If those expensive acne creams aren’t working, perhaps you should try CBC to get rid of those irritating pimples. A study by Olah et al. in September 2016 found that CBC was an excellent acne inhibitor.

As you may know, excess sebum production and sebaceous gland inflammation are the chief culprits in acne development. CBC fights acne because of its anti-inflammatory properties, plus it slows down the lipid production in the sebaceous gland. Arachidonic acid (AA) is needed to create the lipogenesis, but CBC reduces the rate of AA production. Although we need more data, it appears that CBC could become one of the best acne treatments on the market.

Unfortunately, we have to provide you with the same vague answer as we do with practically every other cannabinoid! Marijuana itself is legal for use in eleven states plus D.C, and medicinal use in another 22 states. However, marijuana remains federally illegal.

Generally speaking, marijuana and cannabinoid oils with a THC content of over 0.3% are federally illegal in the United States. Therefore, as CBC is a component of an illicit substance, it too can be classified as unlawful. On the other hand, it is non-intoxicating like CBD, a cannabinoid that is widely considered legal. The DEA’s official stance remains clear. All cannabinoids (except for CBD oil containing less than 0.3% THC) are marijuana. This means they’re all Schedule I substances, and therefore illegal.

At the time of writing, there are patents for at least eight products comprising CBC type compounds. One of these products is designed to treat depression. It says that the CBC should either be pure or an extract from the cannabis plant that has greater than or equal to 30% CBC by volume. We wonder if Big Pharma will be able to ignore the rules once again? Like they have with Marinol, a synthetic form of THC, that is somehow legal.

Back in the 1970s, it was discovered that landrace strains from India had by far the highest level of CBC. Today, CBC is generally found in younger plants. However, most growers breed their plants to have high CBD or THC levels. Therefore, it is hard to find marijuana with a significant CBC content. Here are a few that contain a little CBC:

Are There Any CBC Specific Products on the Market?

As already mentioned, there are no marijuana strains specifically bred to be high in CBC. Consequently, it is difficult to find any products with a high CBC content. One option is to allow the marijuana plant to degrade its THC into cannabinol (CBN). CBN has similar medicinal qualities to CBC.

However, while there is no CBC oil product that we know of, Mary’s Medicinals once again comes to the rescue! This brand offers a CBC topical compound, which contains 100 mg of cannabinoids and is activated with CBDA and THCA. Other ingredients include sunflower seed oil, jojoba, and mango butter. It is designed primarily to treat muscle soreness and inflammation. Also, it’s worth mentioning that most full-spectrum CBD oils will also contain small amounts of CBC.

CBC was the second most abundant compound found in marijuana a few decades ago in a select few strains. Today, however, relatively few strains contain the compound that appears to work best with THC, CBD, and others. Even so, research has shown that CBC on its own could be beneficial as an anti-inflammatory.

The majority of useful CBC research was performed back in the 1980s. Since then, THC and CBD have taken over the interests of the scientific community. It is a shame that federal law prevents further investigation of the marijuana plant. It contains so many compounds that could help to alleviate pain and help tackle an array of medical complaints. For certain conditions, preliminary research suggests that the entourage effect could be more powerful than expensive pharmaceutical drugs.

What is Marijuana Sap? [The Beginner’s Guide]

What is Ditch Weed, and is it Any Good?

What is ditch weed and is it worth taking home?

Why these cannabis nutrients are essential to health