Copaiba and CBD are both natural remedies that are currently in high demand. The two products have become increasingly well-known over the past few years. Perhaps this is no coincidence, as CBD and copaiba have a lot more in common than just their popularity.

In this article, we explain the similarities and differences between CBD and copaiba. We will also look at which is best for what, and how to use them effectively. Read on for our complete guide.

Copaiba: What Is It?

Copaiba comes from trees in the Copaifera species. There are approximately 70 different types of Copaifera tree, and many are native to the Amazon rainforest.

These trees produce a resin that is rich in aromatic compounds called terpenes. These chemicals give the resin its distinctive smell and also have a variety of potential health benefits.

Copaiba has featured heavily in Central and South American folk medicine for centuries. However, it has only recently gained popularity across the globe.

In many ways, it is possible to compare it to CBD, another traditional, plant-based remedy that has suddenly shot to fame.

Explaining What CBD (Cannabidiol) Is

CBD (cannabidiol) is a phytocannabinoid. It is one of the many active compounds that cannabis plants (including hemp) produce.

For years, scientists overlooked it in favor of its intoxicating cousin, THC. However, over the past few decades, research into CBD and its benefits has increased, leading to some exciting discoveries.

Now CBD has emerged from relative obscurity to become a household name. Manufacturers are suddenly infusing it into everything, from coffee to shampoo. However, the classic way of using CBD is as an oil tincture.

CBD oils are generally available as either isolate, broad-spectrum, or full-spectrum options. The former is the purest type of CBD, while the latter two include a range of other beneficial compounds.

Like copaiba, broad and full-spectrum CBD oils contain a wealth of terpenes. They are also rich in other phytochemicals like cannabinoids and flavonoids. This feature means that CBD has a wide variety of medicinal uses and has accelerated its rise to fame.

Let’s take a more detailed look at the way CBD works and how copaiba compares.

Aside from both being popular natural remedies, copaiba and CBD have another crucial thing in common. Both of them affect our in-built endocannabinoid system (ECS).

The ECS has a regulatory function throughout the body. It helps to control mood, memory, appetite, digestion, immunity, and more. It does this via a series of cell receptors (CB1 and CB2) and chemicals called endocannabinoids. 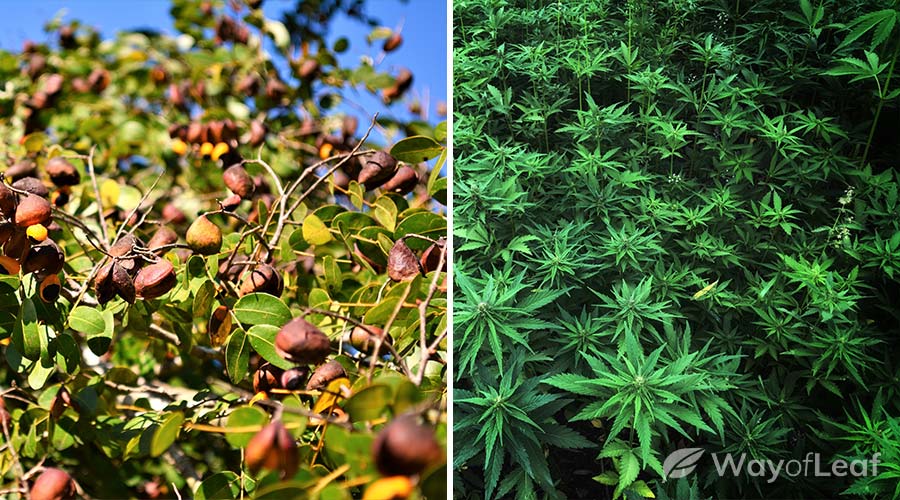 When endocannabinoids bind with CB1 and CB2 receptors, they trigger a series of physiological reactions. These reactions help to keep the body in a state of constant balance, known as homeostasis

As their name suggests, phytocannabinoids like CBD and THC can also influence the ECS. But while THC binds directly with CB1 and CB2 receptors, CBD works more subtly.

Scientists believe that CBD increases our levels of naturally occurring endocannabinoids. This means that it works gently with the body and does not cause an intoxicating high. It also means that it is incredibly versatile with a wide range of therapeutic applications.

Copaiba also affects the ECS, a rarity for a substance that does not come from cannabis. It does so because it contains very high concentrations of a terpene called beta-caryophyllene.

Beta-caryophyllene can bind with CB2 receptors to induce a range of different responses in the ECS. For this reason, some people call it a dietary cannabinoid. As well as copaiba, this terpene is abundant in black pepper, cinnamon, and oregano.

So, although CBD and copaiba are two very different substances, they affect the body similarly. But how do their benefits compare?

Benefits of Copaiba and CBD Oil

Both CBD and copaiba have numerous potential benefits for human health. The two substances share some of their therapeutic properties, while others are unique to one or the other.

For example, many people use CBD oil to help relieve symptoms like anxiety or sleep problems. It may also be helpful for people suffering from addictions or psychosis. However, these benefits are not generally associated with copaiba.

On the other hand, copaiba has some traditional uses that are not associated with CBD. They include relieving paralysis, sexually transmitted infections, bronchitis, and coughs.

Although there is little research to back these historical applications, there have been several studies into the other effects of copaiba. The results show that it has a lot in common with CBD.

Some of the benefits that CBD and copaiba share include:

Let’s look at each of these in more detail.

Among the most well-studied aspects of both copaiba and CBD are their anti-inflammatory properties.

One of copaiba’s most common traditional uses is to aid wound and scar healing. It appears to influence these processes by inhibiting the inflammatory response that CB2 receptors control.

Research, including this 2014 study for Molecules, has shown that copaiba suppresses the release of inflammatory molecules called cytokines. This has led scientists to speculate that it could also benefit inflammatory, autoimmune disorders like multiple sclerosis (MS).

Furthermore, a 2018 study for Endocrine, Metabolic, and Immune Disorders Drug Targets investigated its effects on a rat model of colitis. It found that the compound had antioxidant and anti-inflammatory effects, but did not prevent tissue damage.

CBD is also famous for its antioxidant and anti-inflammatory effects. By targeting the ECS, it modulates the immune response. It also binds with several receptors outside the ECS, further enhancing its effects. Like copaiba, CBD could have benefits for diseases like MS, especially in combination with THC.

A 2017 study for Expert Review of Gastroenterology and Hepatology found that it could also help inflammatory bowel conditions like colitis. It appears that CBD could support the maintenance of a healthy intestinal barrier as well as reducing bowel inflammation.

Both copaiba and CBD also have the ability to protect nerve cells against damage.

A 2012 study for Evidence Based Complementary and Alternative Medicine looked at the effect of copaiba on rats with chemically-induced brain injury. It found that the rats that underwent treatment with copaiba displayed less tissue damage than control animals.

A 2018 review for Surgical Neurology International found CBD to have similar effects. It appears to offer protection against brain damage via several distinct mechanisms. They include reducing inflammation and improving circulation. It also increases the brain’s levels of adenosine, a chemical with neuroprotective effects.

Another use of both CBD and copaiba is preventing the growth of harmful microbes like bacteria. The traditional applications of copaiba also include antiparasitic effects against infections like leishmaniasis.

A 2019 paper for Frontiers in Cellular and Infection Microbiology found CBD had similar properties. It improved the efficacy of several antibiotics against gram-negative bacteria. Full-spectrum CBD oils may have additional benefits as many different terpenes also display antimicrobial activity.

How to Use Copaiba and CBD

Anyone wishing to maximize the benefits of copaiba and CBD will need to use them correctly:

Common Ways to Use Copaiba

The most common method of using copaiba is as an essential oil. It is possible to diffuse the oil in one’s home and enjoy its sweet and woody aroma. Individuals can also apply it to the skin, although it is necessary to dilute it with a carrier oil first.

Try adding 3–5 drops of copaiba to 1 oz of almond, grapeseed, or olive oil and massaging into inflamed areas. Test the mixture on a small patch of skin first and discontinue if irritation occurs.

Copaiba is only suitable for external use. Ingesting large amounts can lead to nausea, vomiting, diarrhea, and liver damage. Furthermore, pregnant women, children, and those with medical conditions should consult a doctor first.

Popular Ways to Use CBD

There are countless ways to use CBD, and the most suitable one depends on the desired effects.

For instance, people suffering from symptoms like anxiety might prefer to take CBD orally. As well as coming as an oil, CBD edibles like gummies are a popular choice. Some consumers also enjoy vaping CBD or even smoking CBD-rich cannabis strains.

Alternatively, people suffering from pain or more localized conditions might prefer to use topical CBD. These products act directly on the ECS in cells underneath the skin’s surface, providing targeted relief. They include creams, lotions, roll-ons, sprays, and more.

Most people consider CBD safe to use, and the risk of side effects is minimal. Nevertheless, it is advisable to talk to a physician before trying it for the first time.

Is It Safe to Use Copaiba and CBD Together?

There is little research specifically into using CBD and copaiba together. Anecdotal sources suggest that it is safe, and may even be beneficial.

It is possible that the remedies could enhance one another’s effects. We know that the many compounds in cannabis work together synergistically, a phenomenon called the entourage effect. Maybe copaiba and CBD could act similarly.

Unfortunately, without scientific evidence to back these theories, there is no proof using CBD and copaiba together is either helpful or harmful. Therefore, it may be best to choose one or the other, initially.

Nowadays, people are turning to natural remedies like CBD and copaiba for several reasons. They might be seeking safer alternatives to prescription medicines or trying to complement their existing treatment regime.

There is clinical evidence to support the use of copaiba and CBD in certain situations. However, there is also room for plenty more research to be done. Until we fully understand their effects, treat CBD and copaiba like any other medicine, and seek professional guidance before use.

What Dosage of CBD Should I Give My Dog? [ANSWERED]

Using CBD Lube for Sex… Should You Try It?

It's a trick question.

CBD Oil Samples – Watch Out for This Common Trap

What Is Rick Simpson Cannabis Oil – and How Do You Make It?

21
9 min read
Video
Join the discussion
TOC
Premium
Your subscription has ended
If you love cannabis and want to support our site, join WayofLeaf Premium today and unlock
Best of all, part of your membership fee will go towards supporting the fight to legalize cannabis.
Sign Up for WoL Premium
Not now
I already have an account
×
Log in to Your Premium Account