Written by Editorial Team
3 min read
3 comments
Read Later
All information on this website is for general informational purposes only and is not intended or implied to be a substitute for professional medical advice, diagnosis or treatment.
King Kong Strain Overview
The King Kong strain is an indica-dominant hybrid cross between the Chronic and Ed Rosenthal Super Bud strains. It offers a very relaxing and sedating high with simultaneous bouts of euphoria that will sweep through along the way. King Kong also can help tremendously with anxiety so it’s a great strain for those with panic disorders. 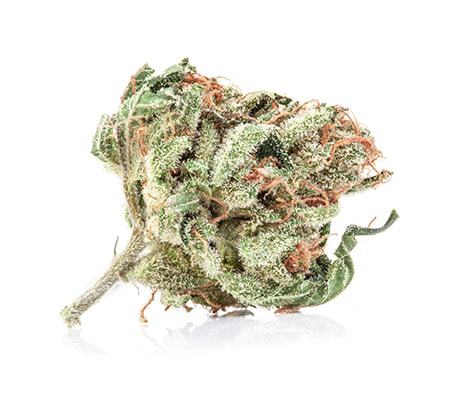 King Kong, named for a gigantic monkey fond of clinging intently to anything in its grasp, is a perfect name for this powerful Indica dominant hybrid that is famous for its ability to deal with any mental or psychological pain.

In the same way that King Kong loved to climb tall towers, the high of King Kong will work its way up and down your body, leaving you entirely and relaxed and medicated. With a tremendous high and surprising popularity, King Kong is another one of those strains that you can rely on many other Marijuana smokers trying at least once.

Let’s learn about this strain, where it comes from, what it can do when imbibed and, if you are feeling up to it, how you can grow it yourself.

What is the King Kong Cannabis Strain?

King Kong is a hybrid strain made from Chronic and the landrace-original Ed Rosenthal Super Bud.

Originally created by an unorthodox breeder known as Dr. Underground, King Kong is all about high THC potency and a pleasant blend of both the knock out effects of an Indica with the sense of sleepy, peaceful contentment.

King Kong is one of those strains with a pretty regular reputation, similar in a manner to fan favorites like OG Kush or Girl Scout Cookies. However, the flavor and aroma of King Kong is nothing like these – it looks, smells and tastes very much like a pretty basic Marijuana strain. However, its effects are entirely out of this world.

Named of course for the gigantic simian monster that plagued the streets of New York City, this strain has a similarly powerful effect on people – among certain circles, being “hit by King Kong” is a regular expression.

Though this strain was initially developed in mainland Spain, it has incurred most of its popularity overseas in the USA. Sought after by those with mental disorders, chronic pain or just an intense desire to fall asleep more easily, King Kong has become one of the go-to strains for a myriad of conditions.

How does it compare to other popular strains in taste and appearance, however? Does it live up to the hype?

King Kong is a very interesting strain regarding its aroma and flavor, as it has a very stereotypical, immediately recognizable Marijuana smell. Though other popular strains can boast such interesting flavor profiles as ‘Sweet,’ ‘Nutty’ or even ‘Cotton Candy,’ King Kong smells like Marijuana.

It is overwhelmingly earthy in its initial aroma, with a powerful after kick of skunk. The use of the word “skunk” to refer to anything intended to be pleasant might seem strange, but it has this strangely unyielding, moreish quality to it that does not put you off.

It is fair to say that both the aroma and taste of King Kong are exceedingly unoriginal, tasting and smelling like any old strain of weed you might happen to find laying around, but King Kong’s lack of any specific or complex flavors somehow works to its benefit.

Instead of offering up complexities, nuances and other subtle flavor profiles, King Kong offers you precisely what you are getting – the smell and taste of high-quality Weed. When smoked, you will emit a massive, billowing cloud of black smoke that will let everyone around you immediately know that you are smoking Marijuana, regardless of their experience level.

It might seem strange, but this forthrightness in flavor is oddly reassuring. King Kong is no-nonsense, offering up a great high with a valuable, long-lasting effect and it doesn’t have any pretension in its smell or taste.

Regarding its appearance, King Kong is oddly conical; it has large flowers that seem as if some structural apparatus supports them. The nugs themselves are similarly dense, offering up a rigid and overall firm nug that appears to hold its shape no matter what you do to it.

Once you start grinding it, the nug typically crumbles and falls apart quite quickly, assuming your retailer has dried it correctly, meaning that this can hold up well in storage despite its oddly uniform, stiff appearance.

By far the most noticeable aspect of King Kong is its rich, heavy smoke. Not only will you know you’ve smoked King Kong, but everyone around you will as well. It has been unfavorably described as like a train engine exhaust, but it isn’t anything as acrid or unappealing as that.

As long as stay upwind of the smoke cloud, King Kong offers a fantastic Indica-dominant experience to rival any other strain.

How about if you want to try and grow some yourself? Perhaps you’re tired of all these retailers not having any King Kong in stock, or maybe their suppliers just aren’t drying it properly.

Let’s take a look at some growing information and figure out how easy it is to try and grow your own.

Just like its relatively uninteresting taste and aroma, King Kong grows in quite a regular fashion.

Taking about 8 or so weeks to flower, King Kong is hardy both indoors and outdoors, offering up a great deal of versatility in how you want to grow it.

It isn’t especially desirous of intense feeding, nor does it need excessive pruning. The plant can tend to grow upwards of 6 feet tall, meaning there is a genuine risk of it brushing against your ceiling indoors, or being spotted by neighbors if outdoors.

Besides this unusual height and otherwise banality, King Kong is unique in the appearance of its flowers. Its flowers are typically large and conical, with an array of colors from dark forest green to an almost sickly yellow color approaching the buds.

It can be wise to prune any small stems that threaten to weaken your overall haul, but King Kong is generally a pretty low maintenance plant with temperature expectations of around 75 Fahrenheit.

You can expect a pretty decent haul from your King Kong, roughly around 30ish ounces per square meter, so make sure you not only have enough room to grow this beast of a plant, but also enough drying space to process your bud.

Now that you’ve grown and properly dried your King Kong (seriously, this is one strain that desperately needs a thorough drying process to ensure quality), you are likely wondering what kind of effects you can look forward to when you first try it.

The effects of the King Kong strain are just like its smell, taste and overall growing regiment; pretty much what you would expect.

King Kong is about 80% Indica, so the noticeable Indica effects are very much the first thing you will notice. It has a powerful, almost instantaneous hold on you when you first smoke it; once you have first tried it, you will understand why they call it King Kong.

You will be knocked down, albeit pleasantly. Relaxation and a mild, happy euphoria will follow, along with an overwhelming sensation of your spirit being uplifted and free.

Despite the high quantity of Indica in King Kong, it is still quite useful as a Sativa, offering a decent amount of energy towards the middle of the high. While you will at first become rather couch locked and unable to move away from your extremely comfortable chair, you will find yourself swiftly feeling like you could go for a walk or maybe paint the house – anything is possible with King Kong.

The primary desired aspect of King Kong comes towards the end when you are left with a lingering sensation of relaxation mixed with a total lack of Anxiety. This complete reduction in any worries seems to go on forever, leaving you with a pleasant after effect of just feeling pretty good about yourself.

This effect is mainly what is sought after for those who take King Kong as a medicinal treatment.

With any Marijuana strain that offers relief from Anxiety and stress, there will be a massive crowd of people clamoring for it to help treat their mental conditions.

The chief medical usage of King Kong is, as would be expected, those with intense stress and depression. Users report that King Kong’s intense, long-lasting period of anxiety-free existence allows them to lead healthy lives during the day, as well as generally keep their condition under control.

Another subset of people who use King Kong for its medicinal purposes are those with Insomnia – as King Kong offers a great deal of relaxation and an out-of-mind sensation, it is exceptionally good at helping those who struggle with falling asleep properly.

Though it won’t knock you completely out like some Indica strains, King Kong’s relaxing effects allow for an easier, gentler and more enjoyable night’s sleep.

So we have talked about the good, what about the bad? Are there are any side effects of King Kong worth knowing about?

In the very same way that King Kong seems to be a fairly typical Marijuana strain in its effects and flavor, so too are its side effects.

King Kong will generally cause dry mouth and dry eyes like pretty much every single Marijuana strain with a strong Indica content. Some users report an increased level of Anxiety or paranoia, but this is usually tied to excessive dosages.

Other than that, King Kong is pretty tame in its unintended consequences – as long as have a glass of water on hand, you will probably be fine.

However, just because it looks and smells boring doesn’t mean it still isn’t serious business in its effects. A powerful relaxation, a clear mind and complete removal of Anxiety make King Kong one of the best strains out there to help tackle mental conditions, especially those dealing with stress or Anxiety.

You might be a bit too obvious if you try to smoke King Kong in public, but as long as you don’t mind people noticing what you’re smoking or growing, King Kong is a perfect strain to help get through bad days, sit back… and enjoy.