Written by John Killerlane, B.A., HDip
4 min read
0 comments
Read Later
All information on this website is for general informational purposes only and is not intended or implied to be a substitute for professional medical advice, diagnosis or treatment.
The White Strain Overview
The White is a cannabis strain shrouded in mystery. What we do know is that it is a frosty and delightful treat with a powerful high. Its THC levels can be as high as 30%, which makes it unsuitable for newbies. 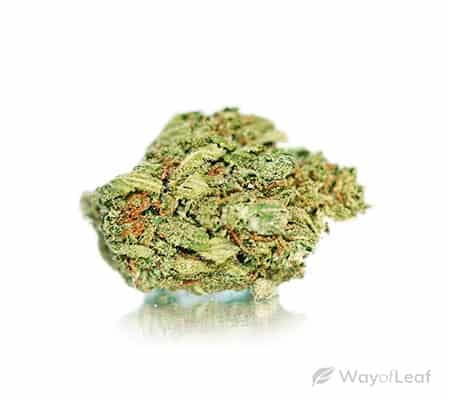 While its lineage is shrouded in mystery, you don’t need to be Sherlock Holmes to figure out how The White got its name. This plant is so heavily frosted with trichomes that it’ll make you feel like you’ve been transported to a magical winter wonderland (and that’s before you’ve even consumed it).

The White was originally named Triangle, supposedly due to its connection to three of the main cannabis-producing cities in Florida, namely Miami, Jacksonville, and Tampa. Others say it was named Triangle because it is a three-way cross hybrid. However, as of now, this strain’s exact lineage is unknown.

What Is The White Strain?

The White is a cannabis plant with a very similar structure to OG Kush. As a result, some speculate that it is a cross between OG Kush and another unknown strain. It’s true, The White’s appearance is similar to OG, and its potency is right up there with it. However, its distinct lack of flavor and aroma contrasts starkly with OG’s robust, earthy fragrance and taste.

In terms of its potency, The White packs in an average THC level of around 25%. As a result, its high comes on fast. Users typically experience a wave of euphoria that leaves them uplifted and happy.

The White’s combination of sativa and indica genetics means that consumers get to experience the best of both worlds. As time passes, users generally start to feel sleepy. Therefore, The White is a strain best-suited to evening time use.

As mentioned, The White is a strain known for its distinct lack of aroma. Unfortunately, this leads some cannabis connoisseurs to overlook it for other more fragrant strains. However, this is a mistake because what The White lacks in aroma, it more than makes up for with its positive effects. 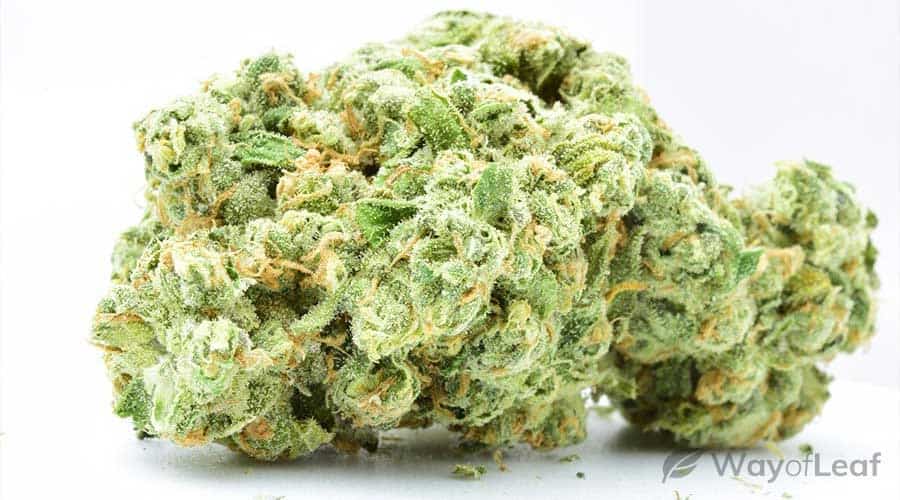 The White is not completely without a fragrance; the buds produce a subtle earthy scent when ground up and combusted.

While The White’s flavors are mild compared to other strains, you can still detect a dank piney flavor on the exhale.

Apart from its potency, The White is probably best known for its heavily frosted appearance. Its dense, medium-sized buds are so coated in trichomes that it will have you dreaming of a White Christmas. Structure-wise, the plant resembles an OG Kush plant, and it also produces a similar yield.

The White is a clone-only strain. Therefore, to grow this plant, you will need to source clippings from a mature female plant of this variety.

Cannabis cultivators say that The White is a high-maintenance plant to grow, which needs to be fed quite heavily. It also requires a significant amount of pruning to maximize air circulation and energy distribution to the upper buds.

Try to withstand the temptation to harvest this plant early. Just because The White plant becomes heavily coated in silvery-white trichomes early in the flowering period doesn’t mean it’s the right time to harvest. Patience is definitely a virtue when growing this plant, as it becomes even more heavily frosted in the later stages of growth.

The White’s indoor flowering period is between 8-10 weeks. Indoor growers can expect an average yield of approximately 12-16 ounces per square meter.

Those growing outdoors will get a more generous return for their time and effort. The average outdoor yield is around 20 ounces per plant, with the end of September being ideal for harvesting outdoors.

Make no mistake about it; The White is an incredibly potent strain. Cannabis analysis laboratory Analytical 360 have recorded samples of The White with up to 30 THC%.

This is definitely not a strain for a novice cannabis consumer to try out. It is only suitable for a more experienced cannabis user to enjoy in moderation.

The White’s high THC level is offset by a much more modest CBD level ranging between 0.15-0.25%

Medical Benefits of The White Strain

Medicinal marijuana consumers use The White to address a whole host of conditions, including pain, chronic stress, mood disorders, and insomnia.

Possible Side Effects of The White Strain

Due to its potency, The White may cause some side effects. The most common of these are cottonmouth and dry eyes. However, some may experience a mild headache, dizziness, anxiety, or paranoia.

The best way to prevent these adverse reactions is by consuming The White responsibly. If you have little or no experience consuming cannabis either recreationally or medicinally, you should avoid The White strain.

Final Thoughts on The White Strain

If you are looking for a cannabis strain bursting with taste and flavor, then The White is not for you. However, if you are a seasoned cannabis consumer looking for a heavy-hitting strain, then you’re in luck.

The White strain offers cannabis consumers the best of both worlds, an uplifting high followed by gentle relaxation. However, this feeling of relaxation tends to intensify over time and causes users to become sleepy.

Again, novices should avoid this strain, as its THC level can reach a whopping 30%.