The Many Colors of Weed [Complete Guide]

Whether you like to admit it or not, ‘pretty’ patterns and bold colors draw the eye. Don’t believe us? Imagine if someone set two bowls of food in front of you.

Plate A is filled with bright, beautiful colors, while Plate B contains nothing but dull and dark food. Assuming you have no idea what’s on either plate, you’ll generally choose Plate A because it looks colorful and vibrant. It’s the same story at the marijuana dispensary. You are always going to be drawn to beautifully colored cannabis.

We usually associate weed with the color green. In reality, strains such as Critical Kush, Grape Ape, Panama Red, and Serious Six consist of several colors, including pink, purple, blue, red, and orange.

In the modern era, breeders have noted that the public prefers colorful cannabis, and create new strains accordingly. However, what is the reason for the different colors of marijuana?

Phytochemicals are biological compounds found in plants, and they are responsible for the various colors of weed. It is a myth that strains with bold colors are more potent than those with less noticeable hues. In reality, although bright colors are more attractive, it doesn’t mean your weed will taste better or provide you with a more psychoactive high. This is because color doesn’t dictate a marijuana plant’s cannabinoid content, the true indicator of strength.

The other key element of cannabis color is the humble pistil.

Each female plant contains an enormous amount of these tiny hairs that cover the buds. These hairs catch the pollen and come out of the calyx during the vegetative stage. They remain white until the latter part of the flowering stage. 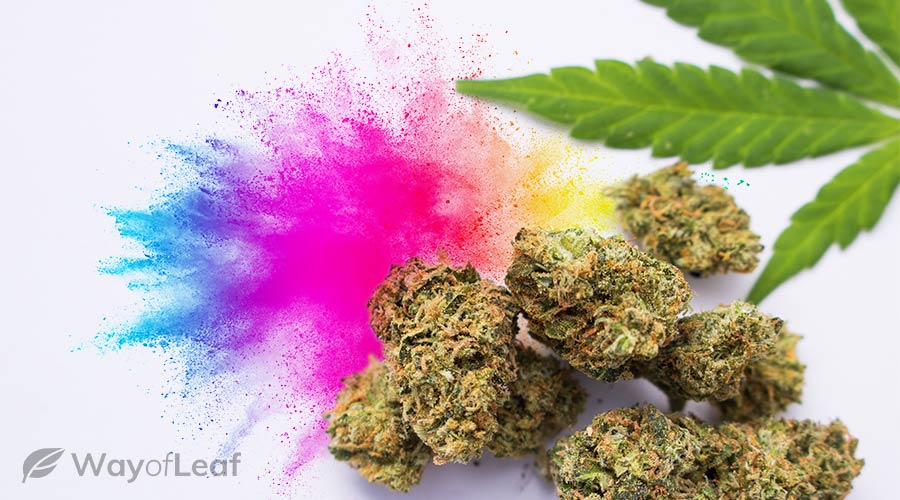 At that point, the pistils change color. Depending on the strain, a plant’s pistils can turn a burnt orange color or even become fire red. Make sure no more than 70-80% of pistils have changed color before you harvest.

Now, let’s take a look at the best-known phytochemicals and the colors they produce.

Anthocyanins – From Yellow/Orange to Blue, Black or Even Red

Anthocyanins are a group of approximately 400 pigment molecules found in flowers, fruits, and vegetables. The color shown depends on the pH the plant is exposed to. In most cases, an anthocyanin provides a purple or blue color. Occasionally, however, you will see red cannabis because of this pigment molecule. Anthocyanins don’t alter the smell or taste of your weed.

You can increase the production of anthocyanins by changing the light spectrum in LED lighting. As these molecules act as the plant’s sunscreen, increasing the light intensity will cause stress, thus boosting anthocyanins. The problem here is that if you overdo it, you give your plants the equivalent of skin cancer and damage them irreparably.

There are strains such as Vietnamese Black that contain so many anthocyanins that they have a black hue.

Blue Cheese and Blue Dream are famous blue strains, while Red Dragon is one of the better-known ‘red’ cannabis strains.

Chlorophyll represents approximately 70% of the pigments contained in plants. It is the reason why the marijuana plant is predominantly green.

It is essential for all plant life because it enables them to absorb enough light to perform the process of photosynthesis. This is where plants synthesize organic matter from inorganic matter using energy from light. As chlorophyll typically masks other pigments, most plants have a green hue.

Carotenoids are present in a variety of living organisms, including plants. They play a crucial role in humans because they are involved in vitamin A production. As you probably know, vitamin A is related to growth and vision in humans. All green plants synthesize carotenoids, but the high chlorophyll content often masks them.

During fall, carotenoids can sometimes showcase their stunning array of colors as the chlorophyll content of plants dwindles. Lycopene is one of the most abundant carotenoids in plants and is responsible for red hues.

Flavonoids are one of the main reasons why flowers have several colors. There are flavonoids in all aerial parts of plants. They play a crucial role in photosynthesis because they block harmful UV rays. Anthoxanthins are among the most prominent flavonoids in plants. These water-soluble pigments range in color from cream to yellow.

You may also notice strains with an enormous amount of trichomes that appear to have a frosty or white color. White Rhino and White Widow are among the most popular.

Other Reasons for the Colors of Cannabis

There are several different factors that can influence the colors of cannabis plants:

During the initial growth stage, you’ll probably notice that marijuana plants showcase intense green coloring. You will usually need to wait until the flowering stage to see more colors. It is a sure sign that the photoperiod is essential in a plant’s coloring. Once you reduce the amount of light exposure to force the marijuana plant into flowering, you may see a color change in the leaves of certain species.

This process is known as senescence, and it becomes more intense as the flowering stage proceeds. Eventually, the biological maturation of the plant causes the production of chlorophyll to slow down and even stop. At this stage, the plant uses its resources to help ripen the flowers, which causes some leaves to wither and die.

Temperature also plays a significant role in the color of cannabis. If you expose your plants to cold temperatures for a prolonged period, you will inhibit chlorophyll production. Remember, chlorophyll tends to mask other colors. When you reduce its presence, you allow secondary pigments such as anthocyanins to come to the fore.

Related article
How to Grow Purple Marijuana – The Full Guide

This is one of the reasons why some marijuana plants become dark blue or purple near harvest. If the concentration of anthocyanins is low in cold temperatures, carotenoids are likely to appear. The result is an array of gorgeous orange/yellow shades.

The pH and level of nutrients also dictate the color of cannabis in the plant’s growing medium. For example, if you are using a hydroponics system, keep the pH between 5.5 and 6.5. If you are using soil, the best range is 6.0 – 6.8. If the pH level remains close to 7.0 (neutral), your plants may show purple colors.

On the other hand, if the pH level goes below 5.5, a reddish color is more likely. If the pH goes above 7.0, blue colors could become prominent in your weed. As for nutrients, if you want red weed, reduce the amount of phosphorus your plants receive. Make sure you don’t go too far and cause a phosphorus deficiency, though!

You could also reduce a plant’s nitrogen intake to ensure the leaves of your plants turn yellow. To be honest, we don’t recommend nutrient deficiency as a strategy to generate color.

A marijuana plant’s genome (its set of genes and chromosomes) determines its unique traits. The genome is transmitted via DNA and comes from a plant’s parents.

As there are several thousand potential combinations, there are hundreds of genetic characteristics to consider. As a result, some strains develop and show secondary pigments. Meanwhile, other strains are never likely to showcase marijuana’s incredible range of colors.

In strains with blue and purple genetics, for example, the plant produces a higher than average amount of anthocyanins.

Even so, there is no guarantee that the strain will provide a purple hue. This is because of the pH, nutrient, and environmental factors outlined above. Incidentally, strains with ‘orange’ in their name usually relate to the color of the plant’s hairs, while ‘white’ strains relate to the plant’s trichome production.

Final Thoughts on the Colors of Cannabis

In general, the only reason to choose colorful cannabis is that you like the look of it. It is a mistake to associate a color with potency. The real reason why your purple weed is stronger than red cannabis is due to the strain’s cannabinoid content.

Therefore, if you decide to pay extra for the most colorful marijuana strain you can find, you are only doing so for the aesthetic properties of the plant. Weed with a large number of anthocyanins may possess a greater number of healthy antioxidants. However, this notion is mainly based on a small sample of studies.

5 Tips on Choosing Pots for Your Cannabis Plants

The complete guide to pots for your pot

The 5 Most Challenging Cannabis Strains to Grow

Can you handle them?

What Is NPK? [Fully Explained]

All you need for a fantastic yield

How to grow this very cherry strain

All you need to grow this out-of-this-world strain