Written by Editorial Team
6 min read
0 comments
Read Later
All information on this website is for general informational purposes only and is not intended or implied to be a substitute for professional medical advice, diagnosis or treatment.
Raspberry Cough Strain Overview
Raspberry Cough isn't as scary as it sounds. Instead, it's an uplifting and energizing high with a punch of fresh raspberries and a light smattering of delectable orange notes.Users can enjoy its potent 24% THC level without a harsh or bitter edge. It incites calm and unworried thoughts, relief from pain and jumpstarts creative juices. 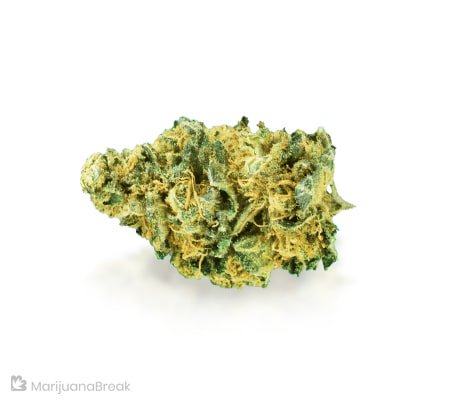 The Raspberry Cough strain is a hybrid strain which was created from the ICE and Cambodian strains. It is a sativa-dominant strain which is 70% sativa / 30% indica. The THC levels are quite high in Raspberry Cough and average between 15 to 24%. The effects of the Raspberry Cough will be noticed almost instantly in a cerebral high. It will clear your head and leave you focused and motivated – ready to take on the day. And contrary to its name, the Raspberry Cough does not induce a coughing spell. You should feel very relaxed and calm, while at the same time maintaining that alertness and motivation.

That being said, it is great for treating conditions such as fatigue, depression, stress, anxiety, and even asthma. This is due to its high THC levels and ability to induce a mild euphoria and boost your mood. Just as the name implies, Raspberry Cough smells and tastes like raspberries. It has also been described to have a very nutty undertone as well as an earthy one. The many energizing effects of the Raspberry Cough have made it a top hit among the marijuana smoking community.

In this review, we will be taking a look at the Raspberry Cough strain and letting you know all the ins and outs of its glory. So, stay tuned for the full dosage on Raspberry Cough.

What is the Raspberry Cough Strain?

Raspberry Cough is a sativa-dominant hybrid created by Nirvana Strains by crossing a Cambodian landrace with ICE. It is 70% sativa and 30% indica, so as expected, the THC levels are a little high. Up to 24% THC levels have been seen in the Raspberry Cough strain of weed however, so be aware. If you want a strain that will boost your mood and make you super productive, Raspberry Cough will definitely be a great strain for you to try out.

It is very smooth in its effects, which both recreational and medical marijuana users just adore. Depending on how it is grown, the THC levels can vary between 15 to 24%. In terms of its flavor and aroma profile, Raspberry Cough not only smells like raspberries but also tastes like them.

The nugs of the Raspberry Cough strain are round and quite small in appearance with small pistils and golden colored trichomes. Upon first whiff, you may notice a very succulent berry and earth smell. And the same notes will be present when you smoke it.

A lot of people love Raspberry Cough because it works pretty fast and often brings about a cerebral high, which can be great to help you focus and clear your mind, as well as keep you motivated. It is most highly known to be a late morning or afternoon smoke – as it is great for lifting your mood and melting away stress. If you suffer from depression, it may help with boosting your mood as well as eliminating the fatigue associated with such a mental illness. It can even help those greatly who suffer from any kind of chronic pain or muscle pain.

For those who do not want to be heavily sedated and still experience medicinal effects, Raspberry Cough is a great strain.

Aroma: When you first take a whiff of the Raspberry Cough marijuana strain in the raw, it may smell very sweet, earthy, berry-like, and nutty. Many describe it as being very fruit-like and love it for this quality.

Flavor: As the name implies, Raspberry Cough has a raspberry flavor. It can also be described as somewhat strawberry or candy-like, with a bit of spiciness mixed in. Others describe it as being a little bit berry-like with orange undertones. But the most dominant flavor note is, without a doubt, the raspberry aspect.

Appearance: The Raspberry Cough buds are round and rather small in appearance and contain little golden trichomes.

If you would like to grow your own Raspberry Cough, you’re in luck, because it is quite easy to grow and is a great strain for cannabis novices. It can grow to be quite tall – up to around ten feet to be more precise – so keep that in mind if you need to be discreet when you are growing as it can be seen from pretty far away.

If you are going to be growing indoors, it may take around 11 weeks before you start seeing flowers. It can be estimated to produce around 14 to 18 oz of bud per square meter, so it’s a pretty good yield on average. Raspberry Cough grows best in soil or in a hydroponic setup as well. Once you start seeing purplish undertones in the plant, you’ll know that it is mature. If you’re going to be growing outdoors, the Raspberry Cough really likes a warm climate.

It grows really tall, so be prepared for that – and it also can leave quite a lingering odor, so if you have nosy neighbors and it’s not legal where you live, then you must exercise caution when growing. But, if you are adamant and score some Raspberry Cough the outdoor way, it yields around 18 oz of bud per plant. It usually doesn’t start flowering until the end of October, so it can be quite a wait, but definitely a worthwhile one.

You can buy Raspberry Cough strain seeds online from a variety of online seed retailers, so if you’d like to grow your own Raspberry Cough you have plenty of options in regards to obtaining your own seeds.

The CBD content of Raspberry Cough has been reported to be pretty low averaging around 1%, or even less in some cases depending on the growing conditions.

Raspberry Cough has a lot of different medical uses. One of the primary things that Raspberry Cough has been great in combating is stress. A lot of people who smoke Raspberry Cough often notice that the first thing they feel is happy and that their mood is boosted. Due to this effect, it can help in treating depression.

In addition to the relaxing and stress-melting effects of Raspberry Cough, many smokers often report feeling an increase in energy as well. This unlikely duo makes it a perfect strain for those wishing to be uplifted and relax you at the same time as being energized.

Possible Side Effects of the Raspberry Cough Strain

There are a few side effects to be aware of when using Raspberry Cough, but none of them are very major luckily. The most common side effects are dry mouth (or cottonmouth), dizziness, dry eyes, headache, and a slight anxious feeling. It does have higher levels of THC, so if you are sensitive to THC you should exercise caution when smoking Raspberry Cough.

On average, there is around 24% THC in Raspberry Cough, so that is something to keep in mind. If you suffer from any sort of anxiety disorder or other mental disorder involving trepidation, you should be cautious because of the anxious affect the Raspberry Cough strain can produce in some people. But overall these side effects are very mild and can be mitigated by staying hydrated before and during your time smoking Raspberry Cough.

As well as being sure to prepare for the dizziness, such as by making sure you are in a stable and safe area – i.e. not on the rooftop of a skyscraper. Eye drops can also help with the dry eyes situation that may arise on a side note. But overall, the effects are nothing to be too worried about and will usually diminish as the high wears off.

The Raspberry Cough is a super popular strain amongst the recreational and medicinal marijuana users. With its ability to energize, yet relax you and boost the mood, it has a unique combination of effects that are both uplifting and relaxing. It can even help with a lot of physical pain and inflammation, so it is popular for this medicinal usage as well. But most popularly it is used to help treat depression since it is great at boosting the mood without overstimulating or producing too much euphoria to overwhelm the senses.

With the amazing and nutty, earthy raspberry flavor, it just further increases the popularity of the Raspberry Cough strain. Many people love it’s fruity and refreshing flavor with the many herbal and nutty undertones that are found throughout the smoke.

So overall, if you are looking for a strain that can energize and relax yet at the same time eliminating pain and melting away stress, Raspberry Cough may be a great strain for you to try out. Although it doesn’t produce that much of a cough as the name implies, the raspberry flavor is surely there and will leave you and your taste buds in utter amazement.

All about this magical hybrid

Is it as smart as it sounds?

All you need to know about this potent hybrid

All you need to know about this regal strain