Written by Editorial Team
6 min read
4 comments
Read Later
All information on this website is for general informational purposes only and is not intended or implied to be a substitute for professional medical advice, diagnosis or treatment.
Golden Goat Strain Overview
Golden Goat is a sativa-dominant hybrid that is the result of an inadvertent cross of Island Sweet Skunk and the Hawaiian Romulan strain. The Hawaiian influences are incredibly dominant with the strain's sweet, fruity, and tropical flavor profile. 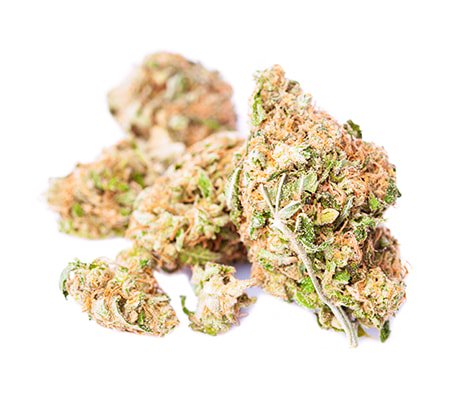 Known for being uber-popular in Colorado, this marijuana strain is said to have actually originated in neighboring Kansas. Funnily enough, the Golden Goat strain is believed to have been accidentally created.

This serendipitous bit of breeding occurred when a male Hawaiian/Romulan inadvertently pollinated a female Island Sweet Skunk strain. And thus, the Golden Goat was born.

What Is the Golden Goat Strain?

The Golden Goat strain is a sativa-dominant hybrid with a 65:35 sativa to indica ratio. Golden Goat is renowned for its vibrant, colorful appearance and its mouth-wateringly sweet, tropical aroma.

Most recreational consumers of this strain describe Golden Goat’s effects as mildly psychedelic, uplifting, energizing, and euphoric. To begin with, Golden Goat consumers may experience a heightened perception of both auditory and visual stimuli. For experienced cannabis consumers, this shouldn’t be too disconcerting, and may even be a pleasant experience. However, novice consumers may find these effects a little unsettling.

Many describe Golden Goat as a classic creeper strain due to the relatively slow onset of its sativa effects.

Golden Goat’s more uplifting and energizing effects can take a little time to kick in. If you do decide to consume this strain, be patient, and allow time for its effects to take hold. Be careful not to try and force matters by overindulging on this strain, as you may experience some unpleasant side effects as a result. We will discuss some potential adverse reactions in more detail in the ‘Possible Side Effects’ section below.

Golden Goat consumers are getting the best of both worlds with this hybrid. As the sativa effects begin to dissipate over time, its relaxing and mellow indica effects come more to the fore. The good news is that most consumers of this strain experience gentle relaxation rather than a feeling of sedation. As long as you don’t overindulge on this strain, you should not experience any unwanted couchlock effects.

When the scent of Golden Goat hits your nose, it can be best described as a refreshing hit of fragrant citrus. It is offset by an earthy twist that almost reminisces a sugary bark.

The taste of this cannabis strain is similar to its citrusy, earthy, and sweet aroma. However, it does lean a bit more towards the tropical-fruity elements of its Hawaiian genetics.

For those familiar with cannabis types, it is safe to say Golden Goat is clearly related to a Hawaiian sativa. This can be recognized because of its distinct coloration, which displays shades of light green and even pink. This vibrant color combination has an almost neon appearance.

Golden Goat possesses a frosty-coating of rich trichomes. These THC crystals cover the plant’s surface and glisten beautifully in the light. 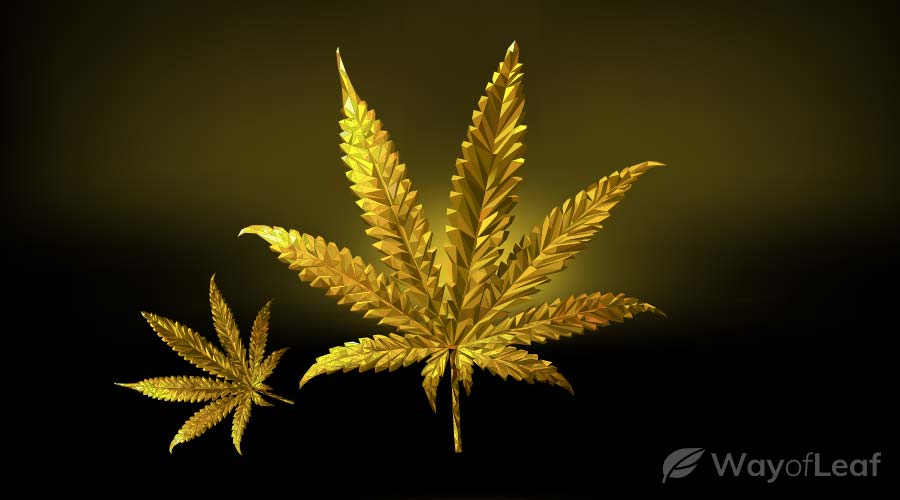 It’s possible to grow this plant both indoors and outdoors. However, as a Golden Goat plant can grow to 78 inches in height, most agree that it is better suited to outdoor growing. If growing this plant outdoors isn’t an option, then make sure to allow for adequate indoor grow space.

Another reason why Golden Goat is better suited to outdoor growing is that it does best in temperatures between 70-80 degrees Fahrenheit. If you are growing this plant indoors, then these same conditions need to be recreated. It is particularly important to pay attention to your grow room’s humidity level when growing this plant.

Golden Goat growers say that it is essential that the plant’s roots have enough room to flourish and grow. They also say that as the plant is quite branchy, training and regular pruning is necessary.

The good news is that Golden Goat plants are naturally highly resistant to disease and only require moderate feeding. These plants tend to flower in 9-10 weeks, and late October is the ideal time for outdoor harvesting.

Successful outdoor yields will reward the grower with around 14 ounces of dry herb per plant. Indoor growers are looking at a return of approximately 16 ounces per square meter.

The highest reported THC content recorded in a Golden sample is approximately 23%. The typical THC range for most Golden Goat strains is between 16-23%. On average, Golden Goat will have a THC level of around 19.5%.

Medical marijuana doctors can’t prescribe specific strains to any of their patients. However, if they could, Golden Goat would likely be one of their most prescribed strains. This is because, anecdotally, some believe that the Golden Goat strain has several potential health benefits.

Firstly, some Golden Goat consumers say that they find this strain useful for temporarily relieving the negative symptoms of depression. As mentioned earlier, this strain has an uplifting effect in its initial stages, which can improve one’s mood.

Golden Goat has relaxing effects in its latter stages, which may help those suffering from stress to unwind.

According to Golden Goat consumers, this strain is reportedly energizing and revitalizing, to begin with. This may make it suitable for those who are trying to recharge because of chronic fatigue or insomnia. However, these energizing effects are relatively short-lived and tend to dissipate before a feeling of relaxation sets in later.

Some say that Golden Goat has relatively moderate analgesic properties. Therefore, it may temporarily alleviate chronic pain, migraines, and joint pain for some consumers.

Possible Side Effects of the Golden Goat Strain

The most commonly experienced side effects of the Golden Goat strain are dry mouth and dehydration. This is, of course, easily manageable with a little extra preparation and planning.

Remember to drink plenty of hydrating fluids before, during, and after consuming cannabis. Drinking water helps to prevent dry mouth and dehydration. It also helps to reduce any headaches or next day grogginess caused by smoking marijuana.

Some Golden Goat consumers may experience heightened paranoia and dizziness, particularly if they overconsume on this strain. A very small fraction of users say that they have felt more anxious after consuming the Golden Goat strain.

While all that glitters is not gold, the Golden Goat strain is as much substance as it is style. Its eye-catching vibrance attracts the attention, but its effects are what keeps its consumers coming back for more.

With the Golden Goat strain, you are getting the best of what a hybrid strain has to offer. Uplifting and energizing initial effects followed by mellow relaxation, without any couch locking or heavily sedative effects.

The only downside is that it isn’t suitable for everyone. Novices should leave this one to more experienced cannabis lovers due to its relatively high THC content and mild psychedelic effects.