The best-known cannabinoids are THC and CBD, although others such as CBN and CBC are gaining a higher level of prominence. You will find the greatest concentration of cannabinoids in the marijuana plant’s resin, which is located in its trichomes.

Different strains contain differing levels of phytocannabinoids, with THC and CBD usually the most abundant.

In contrast to phytocannabinoids, endocannabinoids are produced in the body. They interact with cannabinoid receptors (CB1 and CB2) of humans and animals. There are also synthetic cannabinoids manufactured artificially, which are more likely to gain FDA approval to treat specific medical conditions.

The unique phytocannabinoids found in marijuana have resulted in the plant being championed as a means of treating certain medical conditions. Cannabinoids are also generally insoluble in water but are soluble in non-polar organic solvents.

Why Do Marijuana Plants Produce Phytocannabinoids?

The human body produces cannabinoids for survival as it tries to achieve a state of balance (homeostasis). It is the same story for cannabis plants. They also create cannabinoids to survive as a more direct response to any external issues faced by the plants.

Marijuana grows in a variety of climates, including on mountains, in cold weather, and tropical conditions. As a result, cannabinoids cover the plant’s surface as a means of protection against inclement weather and predators. These compounds are primarily produced by the trichomes, tiny glands that coat the surface of the plant. These trichomes help the plant in the following ways:

Marijuana isn’t the only plant to produce trichomes, but its psychoactive properties are almost unique. What isn’t known is why specific phytocannabinoids, such as THC, are created. It is theorized that THC is an antimicrobial. Plants are susceptible to germs but don’t have an immune system like animals. As a result, they need to produce a range of chemicals to keep them safe against infection.

However, it seems as if strains with high levels of THC are no more resistant to pest infestations and pathogens than low THC strains. That said, THC itself could help protect marijuana plants from UV light. Scientists have yet to find a definitive reason for the development of phytocannabinoids. However, it seems likely that they serve a protective function at the very least.

Phytocannabinoids are produced through the process of biosynthesis. This involves enzymes triggering chemical reactions to create complex molecules from simple ones.

The enzymes take CBGA and CBGVA, known as ‘central cannabinoid precursors,’ and convert them into cannabinoids like CBDA and THCA.

At this point, you need to activate cannabinoids such as THC and CBD through the process of decarboxylation. It is a fancy term for exposing the cannabinoids to enough heat for a specific period. During decarboxylation, chemical compounds lose carbon atoms and release CO2 (this process can also occur due to environmental stresses).

How Do Phytocannabinoids Interact with Our Endocannabinoid System (ECS)?

As we already mentioned, the ECS is contained within the human body. While marijuana has been around for thousands of years, we weren’t aware of how it interacts with the body until recently. Remember, the substance has been prohibited in the United States since 1937. America subsequently used its vast international influence to ‘encourage’ other countries to follow suit.

As a result, while scientific advancement was occurring in other fields, we were left in the dark about cannabis. The brain’s opiate receptor was discovered in 1973. However, we didn’t know that the brains of mammals have receptor sites that respond to the chemicals found in weed until 1988. William Devane and Allyn Howlett discovered this fact. 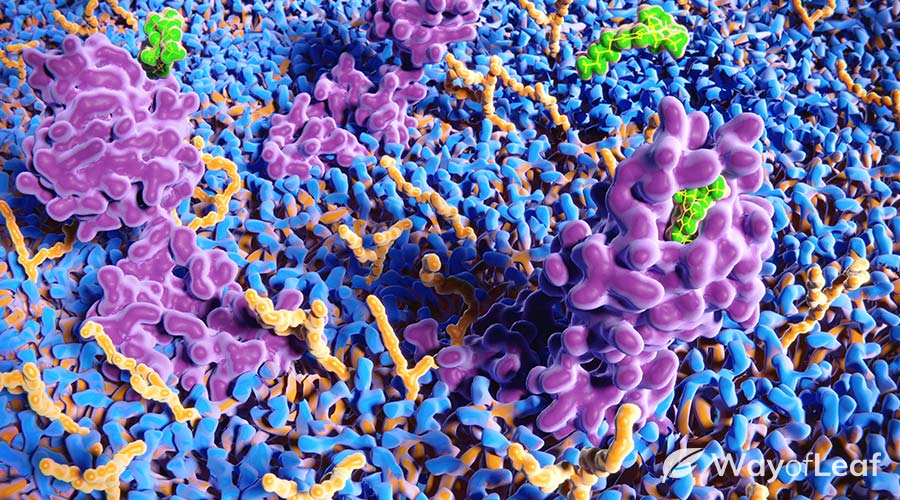 These sites became known as cannabinoid receptors. Scientists have identified two to date (CB1 and CB2). However, they now believe there is a third, which is called GPR55.

The CB receptors are the most abundant type of neurotransmitter receptor in the mammalian brain! The CB1 receptor was identified first, followed by CB2 in the early 1990s.

In 1992, the endocannabinoid anandamide (AEA) was discovered at Jerusalem’s Hebrew University. The same research team later found endocannabinoids such as 2-AG, DEA, and 2-AGE.

Anandamide is often known as the ‘bliss molecule.’ It is a cannabinoid the body produces naturally that happens to mimic THC closely. When you use marijuana, THC enters the body and binds with the CB1 and CB2 receptors, just like anandamide. This process activates neurons in the body.

Anandamide regulates activities such as appetite, mood, pleasure, and memory. There is also research that suggests the cannabinoid causes ‘runner’s high’, a feeling of euphoria associated with exercise.

2-AG is known for affecting the central nervous system. It is formed via a complex process that involves arachidonic acid, which contains DAG, a substance that reacts with glycerol. 2-AG is believed to be crucial in regulating our immune system, and it could also help with pain management.

The ECS performs a variety of tasks, but its primary goal is to ensure the body is in a state of homeostasis. Whenever an imbalance is detected, the body synthesizes cannabinoids that interact with the CB receptors. The result is the stimulation of a chemical response that helps bring the body back to its state of balance. However, everyone’s ECS is unique, and some people have a clinical endocannabinoid deficiency.

There are numerous reasons why this happens. For example, the body may not produce enough CB receptors and fail to synthesize enough endocannabinoids. It creates too many enzymes as a result. These, in turn, break down the cannabinoids. External factors, such as medication or food, could also decrease ECS signaling.

In theory, the phytocannabinoids contained in marijuana can help individuals with a clinical endocannabinoid deficiency.

The rate of endocannabinoid production can vary significantly from one person to the next. Also, the level of CB receptors in our bodies is different. Therefore, the potential impact of phytocannabinoids on your ECS is hard to predict.

If your body doesn’t produce enough cannabinoids, it could have an impact on anandamide or 2-AG. If you are in this situation, consuming marijuana and its cannabinoids could compensate for the lack of natural cannabinoid production. It is a process comparable to that of women using synthetic hormone replacement therapy to counteract the effects of menopause.

What Does Research Say?

Interestingly, a study by D’Souza et al., published in Biological Psychiatry: Cognitive Neuroscience and Neuroimaging in 2016, found that prolonged use of weed reduces the number of CB1 receptors available for activation.

In other words, if you smoke cannabis frequently, you could reduce its potential medicinal effect. Incidentally, human brain imaging shows that abstaining from marijuana for just 48 hours allows the system to become ‘sensitive’ to the impact of cannabinoids once again.

If you find that marijuana isn’t treating your symptoms as well as before, stay off it for a couple of days rather than trying to increase the dosage.

What Are the Names of Some Phytocannabinoids?

Mass prohibition has ensured that the science behind how cannabis works is not fully understood.

Remember, there are over 500 chemical compounds in the marijuana plant. Much is written about THC and CBD because they are the most abundant compounds. However, the role of ‘minor’ cannabinoids, terpenes, and flavonoids, could be more significant than we think. For example, terpenes could enhance the therapeutic efficacy of cannabinoids like CBD and THC.

Dr. Raphael Mechoulam came up with the term ‘entourage effect.’ It describes how a combination of marijuana compounds is likely more effective than any isolated compound. Other researchers suggest that the phrase ‘ensemble effect’ is more accurate as it describes the process of marijuana compounds cooperating. The term ‘entourage effect’ seems to indicate that one cannabinoid dominates while the rest follow.

Here are the names of a few cannabinoids; some are better known than others.

THC activates the CB1 receptor and is famed for being the main intoxicating compound of marijuana.

CBD is the second most abundant phytocannabinoid in weed and is known for NOT providing an intoxicating feeling.

THCA is the most abundant phytocannabinoid found in raw cannabis. It doesn’t get you high, but once you decarboxylate it (usually via heat), it converts into THC.

You will only find tiny amounts of THCV in weed. However, it is potentially useful in the treatment of obesity, while also having antiepileptic effects. THCVa is THCV’s acidic form.

Like THCA, CBDA gets converted into a different cannabinoid (CBD) through decarboxylation. Scientists are still trying to find out what properties CBDA has, although it is possibly an anti-nausea and anti-tumor agent.

There has been a higher degree of interest in CBN as a medicinal agent in recent times. It is believed to play a significant role in weed’s sedative effects.

CBDV is a ‘relative phytocannabinoid’ of CBD as both come from CBGVA, a cannabinoid precursor. It could have anticonvulsant properties. CBDVa is the acidic form of CBDV and is found in raw weed.

CBC is created when CBCA (cannabichromene carboxylic acid) is decarboxylated. It could improve the rate of neural cell production that aids brain function.

The compound CBG is created when CBGA is decarboxylated. It has a weak bond with the CB1 and CB2 receptors but can potentially help with conditions such as IBS and Huntington’s.

In truth, we have barely scratched the surface of what phytocannabinoids are and how they affect the body and mind. The main reason for this is a relative lack of research. Prohibition has hurt scientific research into this fascinating plant, and we are now playing catch up in a significant way. With tens of millions of people using cannabis, it is well past time that unencumbered research is allowed across the globe.

So far, we know that the body has an endocannabinoid system. The phytocannabinoids in cannabis interact with CB receptors in the brain and central nervous system, as well as throughout the body. The fact that our brain naturally produces cannabinoids helps explain why marijuana has potential therapeutic effects.

As research intensifies, we’ll hopefully prove that cannabis is an effective medicine. More importantly, we will know why this is the case.

21
8 min read
Join the discussion
TOC
Premium
Your subscription has ended
If you love cannabis and want to support our site, join WayofLeaf Premium today and unlock
Best of all, part of your membership fee will go towards supporting the fight to legalize cannabis.
Sign Up for WoL Premium
Not now
I already have an account
×
Log in to Your Premium Account