The Netherlands has an array of quirks that seem charming but confusing. For example, it doesn’t follow the tried and trusted method of naming its capital where the government is located. Amsterdam became the official capital in 1814, but The Hague is the nation’s administrative center. It is also where the government operates and contains the Supreme Court.

In contrast, Amsterdam is rich in culture, and also in cannabis! The city is famous for its vibrant coffee shop scene, where patrons go to have a relaxing smoke. Mellow Yellow was the first of these marijuana hotspots, taking advantage of a gray area in Dutch law in 1967. Sadly, it closed in 2017. Dutch legislation ruled that coffeeshops couldn’t open within 250 meters of a school. Mellow Yellow was unfortunately within that radius.

Over in the United States, the state of Colorado is vying with the likes of Washington, California, and Oregon to become ‘the’ place to use cannabis. It missed out on becoming the first American state to legalize adult-use marijuana. State Governor, John Hickenlooper, added Amendment 64 to the state’s constitution on December 10, 2012. It happened four days after Washington state became the first to allow recreational marijuana.

Colorado has become a weed hotspot in North America and has a reputation for producing exceptional cannabis. We thought it would be fun to compare one of the best marijuana locations in Europe with an American counterpart. Read on to see if you are better off smoking cannabis in Colorado or Amsterdam.

There are more than 150 coffeeshops in Amsterdam. The vast majority of them are modestly sized, and this only adds to the friendly, chilled-out vibe. You are allowed to walk in, buy some weed, and find a seat. There, you can enjoy your purchase, listen to music, and make new friends.

It is difficult to describe the atmosphere or, indeed, the experience. It is essential to visit one of these coffee shops to gain a greater understanding and appreciation.

Most visitors agree that it is about as pleasant a time as they have ever had smoking cannabis in a public setting. The majority of places have a menu with a variety of different strains available. Prices are per gram or pre-rolled joint.

It is a very different tale in Colorado. Even though it is entirely legal for adults aged 21 to use marijuana, you are not allowed to use it in public. However, a handful of businesses are sidestepping the 2006 Colorado Indoor Clean Air Act by acting as private clubs. An example is Tetra, which sells daily or monthly memberships.

On January 1, 2020, House Bill 1230 came into effect. It permits ‘tasting rooms’ that sell cannabis products. HB 1230 also allows ‘marijuana hospitality establishments.’ They are not allowed to sell weed on-site, but you can use pre-purchased pot there. The Tetra Private Lounge is akin to using cannabis in your living room. There are comfortable sofas, a huge TV, and many other amenities.

One still gets the feeling that they are engaging in clandestine activity, rather than the ‘open’ feel of Amsterdam. This will seem even more bizarre after you have read the next section.

Even in the exclusive Colorado lounges, you might still feel like a criminal. Various people have tried to open consumption spots such as coffee shops, only to get raided a week later. This is even though the state fully legalized the purchase and possession of up to an ounce in 2012 for adults. However, apart from the sporadic business such as Tetra, you have to smoke it at home.

In contrast, you feel relaxed and at ease in Amsterdam. So much so, that many people assume cannabis is 100% legal there. It isn’t! One thing Holland has in common with the United States is the confusing mess surrounding marijuana law. Coffeeshops can legally sell marijuana for personal consumption. However, it is illegal to grow cannabis in the Netherlands. The harsh penalties for those who get caught have pushed production underground.

It is an utterly ridiculous situation. The Dutch Government is happy for people to sell cannabis but not to grow it! Where do they think it comes from? Coffee shops became legal in 1976 and effectively decriminalized marijuana use. More than 40 years on, the government has done nothing to curb the power of the criminal gangs that produce the herb. An estimated 80% of the cannabis exported to European countries is grown in the southern Dutch province of Brabant.

A change is in the air, however. The government set up a four-year pilot scheme in ten cities in 2020. Seventy-nine coffeeshops will receive cannabis from officially regulated marijuana producers. However, Amsterdam is not involved in the trial, nor is Utrecht, Rotterdam, or The Hague. If you go to Amsterdam, please note that only possession of up to five grams is decriminalized. You can buy cannabis at the age of 18 in the city, as opposed to 21 in Colorado.

Colorado is fast closing in on a decade of legality. As a consequence, the state’s myriad of dispensaries sells practically every form of marijuana you can think of. If you can imagine a type of weed product not on sale in Colorado, create it yourself and make a fortune! You get flower, edibles, blunts, and much more. The main downside is that you can’t sample what you’ve purchased in the dispensary. 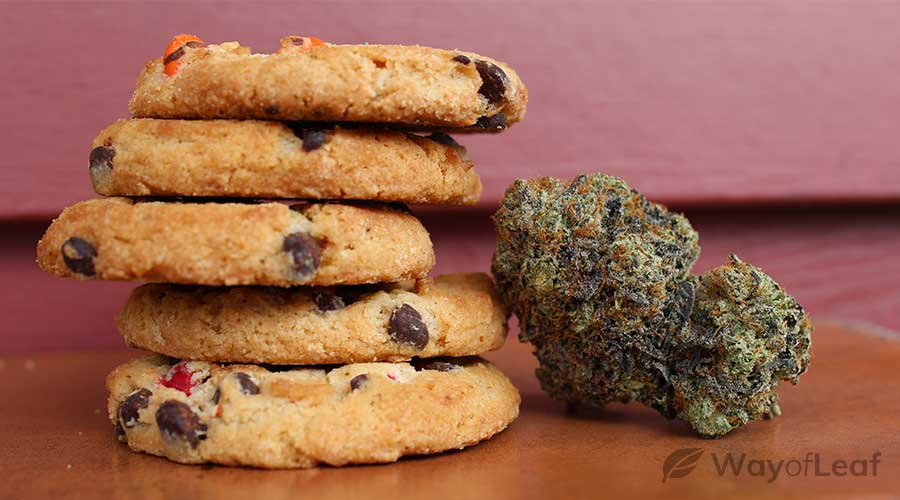 The Amsterdam coffeeshops tend to fall short in the variety category. Sure, you usually have the choice of a couple of dozen strains, but you are generally smoking it. These locations are not the best for edibles. That said, there are a few shops that make beautiful artisan edibles you simply must try.

Those who visit the city are routinely stunned by the remarkable array of stoner food available. These days, you get pizza delivered to your doorstep, so those who get high at home are never caught short when the munchies arrive. Even so, Amsterdam caters to its millions of cannabis tourists with exceptional street food. You will struggle not to find fries, and please note that the Dutch like mayonnaise with almost everything!

You can find all-you-can-eat spare ribs in dozens of places. One of the best desserts available is a hot waffle topped with Nutella. If you have a sweet tooth, there is no chance you stop at just one.

This is the area where Colorado beats most places, including Amsterdam. While the Dutch city is the epicenter of excellent cannabis genetics, full legalization in Colorado has done wonders for the quality of weed available. In licensed dispensaries, everything is tested in the state, and it is labeled for THC and CBD percentage. You should not find any cannabis with pesticides or other dangerous ingredients.

It is pretty normal to find cannabis with THC of over 20% in Colorado. Also, the cost of flower has dropped significantly in recent times as supply exceeds demand. It isn’t hard to find an ounce of reasonable quality cannabis in places like Denver for $200. It is the same situation with high-potency products such as rosin and concentrates. You can find waxes and shatters with approximately 90% THC, and over 70% is commonplace.

It is a different story in Amsterdam. You can still find high-quality cannabis, but it is much harder to do so than in Colorado. In general, what you see is approximately low to mid-shelf level. Also, there is a significant difference in the quality of the coffeeshops. Before going to Amsterdam, do your research and look for the most reputable locations. Boerjongens has two shops in the city and is highly recommended by those who frequent it.

Those accustomed to the fancy packaging in Colorado are in for a shock when they visit Amsterdam. It is very much an old-school experience, with pressed hash from places like Lebanon and Morocco. You’ll find that it is a very different experience, and you will likely be taken aback by the smell!

Also, it seems as if the price of cannabis is increasing in Amsterdam annually. You can expect to pay $20 for a single gram of premium-grade weed in the city.

If you are a tourist, you will find it a lot easier to move around Amsterdam than in most big cities in Colorado. You can spend the entire trip walking around the center of the city because all the cannabis-related things you seek are right there. If you want to do a little exploring, you can rent a bike or try public transport, which includes bus, tram, and train lines.

In contrast, public transport in places like Denver simply doesn’t compare. You’ll need to rent a car in all honesty, and can’t get stoned while driving! Dispensaries are spread out, though you’ll find the occasional hotspot. Even so, you have to find a place to smoke your weed once you have purchased it.

On the plus side for Colorado, you also have the option to grow cannabis if you elect to live there.

State law allows for up to six plants grown in a private location. Also, a maximum of three plants can be flowering at the same time. In Amsterdam, residents are not permitted to grow marijuana, so don’t even try.

What’s interesting is that locals in Amsterdam have little affinity for cannabis. It is normalized to the extent that those who live there hardly even pay attention. An exception is when locals make fun of stoned tourists. It is also noteworthy that staff in coffee shops tend to ask tourists to leave if they take out their cameras. In Colorado, it is relatively easy for tourists to get photos taken with dispensary workers.

If you are a tourist, Colorado and Amsterdam offer very different things. If all you care about is finding high-quality cannabis at low prices, Colorado is king. It is a state where weed is freely available for all adults aged 21+. There is no looking over your shoulder when walking home with up to an ounce in your possession.

However, there are limited places where you can smoke it. Despite all the choices available to customers, they still need to go home or find a marijuana-friendly hotel or club, which isn’t as easy as you might think.

In Amsterdam, only the possession of up to five grams is decriminalized. However, you are free to enter a coffee shop, make a purchase, and enjoy the high in the comfort of the shop. The quality isn’t as high as in Colorado, but if you are a relative novice, who cares? It is fair to say you go to Colorado for top-grade weed, but Amsterdam is the place for a beautiful marijuana smoking experience.