There are still people who use the terms ‘coffeeshop’ and ‘head shop’ interchangeably. This is incorrect because they are rather different. Coffeeshops are primarily associated with Amsterdam. They take advantage of a legal loophole in the Netherlands. These shops can sell cannabis to customers for consumption on site. However, it is illegal to grow marijuana in the first place!

Headshops also skirt the boundaries of legality and use loopholes to stay open. These locations tend to specialize in cannabis-related paraphernalia.

What we hope to do in this article is to clarify the differences between coffeeshops and head shops. Hopefully, the information will clear up any misconceptions.

What Is a Head Shop?

A head shop doesn’t sell marijuana. Instead, it offers cannabis consuming tools and devices. The goal of the head shop is to assist you in the improvement of your marijuana using experience. It is the right place to turn if you need the following:

Head shops also sell products relating to cannabis culture. Examples include publications on clothing, growing weed, and even marijuana-inspired home décor! In some cases, you could even find sex toys somewhat related to Mary Jane!

Plenty of head shops have garnered a reputation for the bizarre. Azarius in Amsterdam is a prime example. In general, it is tough to provide a worthy outline of what a head shop provides. It is far better for you to experience one for yourself.

Although head shops don’t sell marijuana, they might offer other ways to get high. One notorious example is the sale of empty whipped cream containers. Users try to get high on nitrous oxide, though it is a potentially dangerous move. Some shops also sell kratom and salvia divinorum. Please bear in mind that these substances are illegal in places where cannabis is permitted.

The origin of the term ‘head shop’ is somewhat elusive. Some people claim it is an acronym for ‘He Eats Acid Daily.’ Another possibility is a link to Grateful Dead fans, who are known as ‘Dead Heads.’

A more likely explanation involves the use of slang in the early 20th century. It was then when we first paired the name of a drug with the word ‘head’ to denote an addict. For example, ‘crackhead’ is a common derogatory term for a person addicted to crack.

During the 1960s and 1970s, there were many potheads and acidheads involved in American counterculture. It was probably at this time that headshops in the U.S. became popular. They were a way for drug users to enhance their experiences.

Head shops began by specializing in the sale of drug paraphernalia. They managed to avoid legal scrutiny by being creative in their marketing. For instance, certain words were banned in the shop as their usage was potentially incriminating! Those who uttered the words in the store were immediately banished and usually banned.

It is still the case today in the United States. The sale or purchase of drug paraphernalia is federally illegal. However, you can walk into a head shop and buy the equipment ‘for tobacco use.’ Shop owners make it clear that they don’t sell the items to help with the consumption of cannabis. The loophole only works with clean pieces of equipment.

Even now, you must never mention that you are buying a piece of kit for usage with weed.

These days, you can still find head shops in states where cannabis is illegal. For example, Alabama has at least 30 head shops, even though the state doesn’t even have an MMJ program.  There are also ‘tobacco shops’ that sell similar items.

What Is a Coffeeshop?

In this instance, a ‘coffeeshop’ has one BIG difference from your local café! These businesses sell the usual café items such as coffee, pastries, and sandwiches. However, the coffeeshop also sells small amounts of marijuana.

You can find head shops in many countries around the world. In contrast, you can technically only find the famous coffeeshops of lore in the Netherlands. Other places have tried to copy the experience but often fall short.

You will find the most famous coffeeshops in Amsterdam. Locals refer to these places as a koffiehuis. You can go there, sit down, and check out the menu. Feel free to enjoy a delicious cup of artisan coffee, a cake, and a joint. Make sure the place has a green and white license on the door. 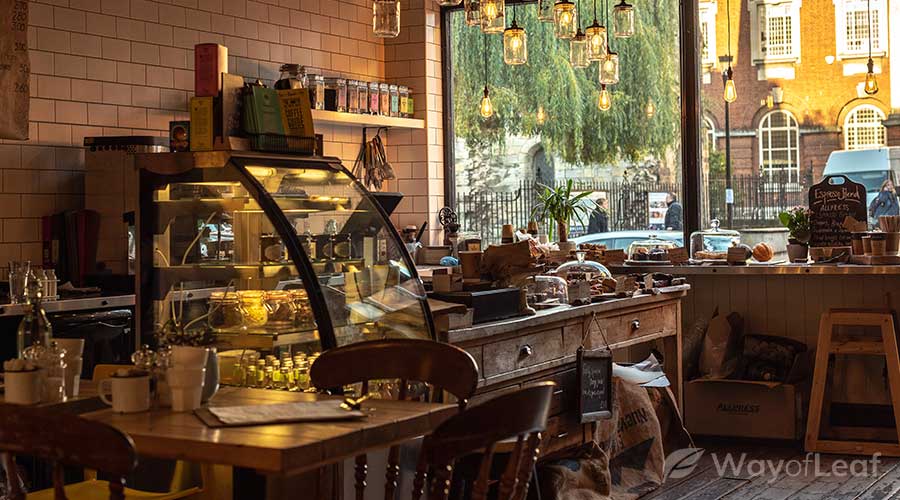 Although there are coffeeshops throughout the Netherlands, it is best to stick with Amsterdam. It is the most tourist-friendly as coffeeshops in other cities sometimes require a Dutch ID. We also advise checking out customer reviews before frequenting any such location.

The atmosphere is generally laid back. You can relax and chill out or strike up a conversation with the person beside you. Coffeeshops are great places to socialize in the Netherlands. You get to meet people from all over the world.

In general, you can order a cannabis product from the menu. Most places also supply you with matches and rolling papers. Interestingly, most coffeeshops ban the smoking of tobacco on the premises. Another thing to note is that these places are not legally allowed to sell alcohol.

The Netherlands experienced an increase in drug use, similar to the United States in the 1960s. Policymakers decided it was time to take action. Unlike in America, however, progressive and conservative politicians decided to work together. They aimed to distinguish between ‘soft’ and ‘hard’ drugs.

Cannabis fell on the ‘soft’ side of the equation. Heroin and amphetamines, among others, were considered’ hard’ drugs.

Even so, the open usage of marijuana was illegal despite a seemingly higher tolerance for it within the country. In 1972, the Mellow Yellow coffeeshop opened in Amsterdam. It was the first business of its kind. It ostensibly sold tea over the counter, but patrons could also buy cannabis.

Other coffeeshops followed suit. The authorities realized that it wasn’t causing an increase in crime. They turned a blind eye for the most part. However, proper coffeeshop regulation only occurred in the 1990s. These days, Dutch coffeeshops are allowed to function as long as they meet the following criteria:

Recent rules state that coffeeshops can no longer operate within 250 meters of a school. This has caused the closure of dozens of shops, including Mellow Yellow.

Differences Between a Head Shop and Coffeeshop

Here are the main differences between a head shop and a coffeeshop:

Final Thoughts on Head Shops vs. Coffeeshops – Which Is Better?

There is no ‘better’ option in general. It is all about what you want from your experience. A head shop is best if you aim to buy marijuana-related accessories. Make sure you don’t mention this while in the store!

A coffeeshop is the choice for those who want to enjoy an intoxicating high in a relaxing environment. You can socialize with strangers and enjoy a fun evening with no hangover.

Hopefully, this article helped provide you with useful information and cleared up some misconceptions. You get high in coffeeshops, while head shops sell you equipment to help with the cannabis-using experience.

Water pipes that are affordabl…

How Cannabis Might Help You During COVID-19 (Or Any Pandemic)

How Much the Government Is Making by Keeping Pot Illegal

1
3 min read
Join the discussion
TOC
Premium
Your subscription has ended
If you love cannabis and appreciate our content, join WayofLeaf Premium today and receive:
Best of all, part of your membership fee will go towards helping to legalize cannabis.
Go Wayofleaf Premium
No thanks, I can't afford it
I already have an account
×
Login in to your premium account