Many people think of Colorado as the home of U.S. weed, with its prosperous cannabis farms and booming weed industry. Colorado was one of the first states to legalize pot and helped to pave the way for future changes across the country.

You might know Colorado for pushing boundaries and leading the cannabis industry. However, there are still numerous places within the state where no dispensaries exist. This is a fact that often surprises tourists who visit Colorado to experience its thriving weed culture. They are stunned to find that a surprisingly large percentage of the state still does not allow marijuana for sale.

It is a similar situation across the United States. You can find out more by reading this article on counties in legal states that have banned cannabis use.

Let’s take a look at the counties in Colorado where you will not find marijuana for sale.

As of 2012, recreational marijuana became legal in the state of Colorado. The state passed Amendment 64 in December 2012 and made the sale and use of cannabis legal for the very first time. The law finally went into effect on January 1, 2014.

Under Colorado state law, growing, selling, and using cannabis is legal. However, each county can set its own rules as to whether it is for sale. Within Amendment 64, specific laws outline each county’s power to control the sale of recreational weed within its borders.

To purchase MMJ, you must first qualify for a medical marijuana card. On the other hand, anyone who is over the age of 21 can acquire recreational marijuana.

The legality of cannabis sales gets even more complicated when you break it down to the town level. Incorporated towns can set their own rules as to whether weed is legal. This means cities such as Aurora have decided to allow sales, despite being in both the Arapahoe and Douglas counties where sales are banned.

Even in counties where weed is legally available, there is often confusion concerning the limitations placed on sales. Amendment 64 set limits on the opening times of establishments that sell marijuana. Stores cannot open before 8 am and must close before midnight.

Each county has the power to limit opening hours further as long as they still fall within the state’s restrictions from 8 am to midnight. For example, in the city of Denver, the original deadline was 7 pm. It has since changed its rule, and many dispensaries are now open until 10 pm.

Where Is It Illegal to Purchase Marijuana in Colorado?

There are a total of 64 counties in Colorado. As late as 2018, four years after adult-use marijuana became legal, over HALF of them didn’t permit the sale of recreational cannabis. Indeed, over half of Colorado’s counties didn’t even permit the sale of MMJ! A mid-year report from 2018 showed that only 35% of local jurisdictions in the state allowed retail or medical marijuana sales.

Things have changed as areas such as Craig County and Moffat County look to join the numerous counties in Colorado that make money from cannabis. However, if you live in Baca County, for example, the best you’ll do is find CBD for sale. It is a similar tale in El Paso county and several others. It is the east of the state that has the biggest problem with marijuana legalization. 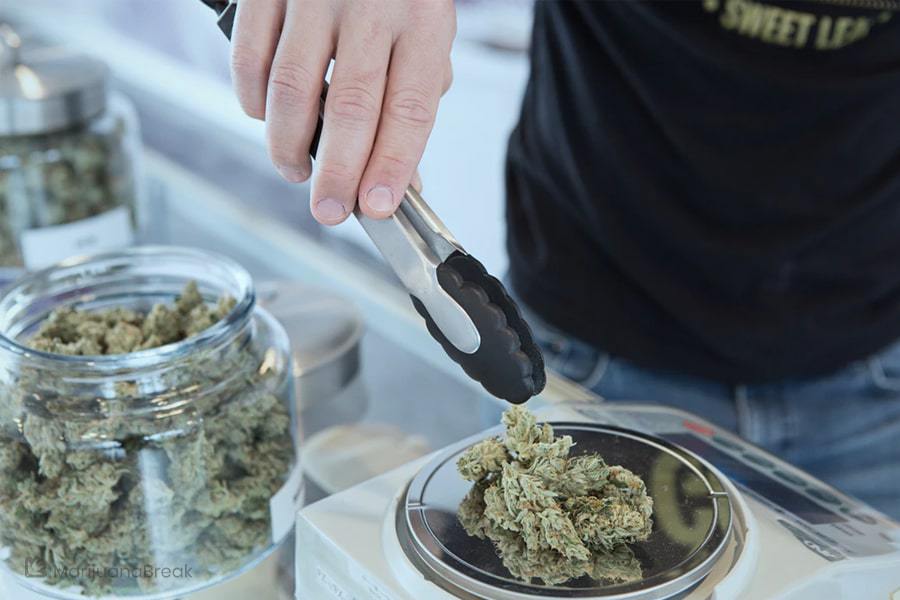 Go to places like Yuma, Kit Carson, and Baca County, and you’ll struggle to understand why there are no dispensaries readily available. Here are a few other counties, where, to the best of our knowledge, cannabis is prohibited:

Perhaps the biggest surprise was the relative lack of licensed sellers in the entire Colorado Springs area. Up until recently, there were none at all. Things have finally changed for the better.

What’s Going on in Colorado Springs?

It is the second-largest city in the state, but also known as a conservative area. The city council banned recreational cannabis sales in 2013, just before the new initiative was due to begin. However, there was a sense of regret as the city could see how weed taxes were aiding other towns in the state. In many places where marijuana is legal, the tax funds are used to enable significant projects to begin.

To make matters worse, many Colorado Springs residents only needed to make a short trip to purchase cannabis. So, the city was filled with people smoking weed, and it made no cash from the situation! A study by the University of Denver showed that Colorado Springs was losing out on around $20 million a year.

Fortunately, common sense has prevailed, and there are now several places where residents can buy marijuana.

Where Can I Purchase Cannabis in Colorado?

The three top destinations for tourists heading to Colorado to try some of the state’s best cannabis are Denver, Boulder, and Aurora. All three of these cities have dispensaries around almost every corner. They live up to what most people imagine when they think of Colorado’s weed industry.

Most of the touristy mountain towns known as skiing hot spots do not allow the sale of weed. The exact reason for this is unknown. However, it has led to tourists flocking to local towns where they can legally buy marijuana during their ski trips.

Douglas County has attempted to find a balance. While it does not allow weed for sale, it has legalized the possession and consumption of marijuana. Every county and even every town has its specific laws regarding pot, making it a minefield for tourists. Here are a few counties where you WILL find cannabis, either recreational or medicinal:

Where Can You Smoke Weed in Colorado?

Colorado law does not distinguish between residents and visitors. As long as you are visiting one of the counties where it is legal to sell cannabis, you have the same purchasing rights as locals. All you require is some form of ID to prove that you are over the age of 21, making the process almost identical to buying alcohol.

However, it is still illegal to consume weed in public places within the state of Colorado. For residents, restrictions on where they can enjoy marijuana are very rarely a problem. This is because the consumption of pot within your own home is legal, although landlords do have the right to include terms in tenancy agreements that prohibit the use of cannabis.

Tourists do not have such a lenient way to light up in Colorado. Most hotels have strict rules in place that prohibit you from taking marijuana while on the property. This means that even if you plan a trip to a county that allows the sale of marijuana, you might find yourself with nowhere to enjoy it.

Final Thoughts on Counties in Colorado that Do Not Sell Weed

Purchasing and consuming cannabis within Colorado can quickly become confusing. This is especially the case for tourists who are not familiar with local laws. It is important to remember that there are three different sets of laws at play: Federal law, state law, and county law. Each set of rules places various restrictions on where to sell and consume cannabis.

The situation in Colorado, and other ‘legal’ states, means that black market cannabis continues to run rampant.

Illegal cannabis is cheaper, but it also isn’t subject to testing. Therefore, you are taking a risk when you buy it. Logic dictates that the black market would suffer if every Colorado county allowed the sale and purchase of pot. Now imagine what could happen if the entire nation permitted adult-use marijuana? The black market would continue to operate, but surely not at the current level?

Before heading to Colorado, it is worth doing a little research into your exact location. A few quick Google searches could help you avoid heading home with a fine or having to travel for miles to find a legal store. Incidentally, we have a guide on what to do in Denver when you’re stoned. Enjoy!

2
3 min read
Join the discussion
TOC
Premium
Your subscription has ended
If you love cannabis and want to support our site, join WayofLeaf Premium today and unlock
Best of all, part of your membership fee will go towards supporting the fight to legalize cannabis.
Sign Up for WoL Premium
Not now
I already have an account
×
Log in to Your Premium Account