The edibles market has expanded rapidly in recent years as cannabis users begin to enjoy their weed in a variety of increasingly delicious ways. Rather than paying a small fortune for store-bought versions, people are starting to create their own cannabis-infused butter, which is then used in different weed-based recipes. The trouble with DIY cannabutter is the lengthy preparation time. Imagine if there was a machine that could do all the hard work for you?

What Is Magical Butter? 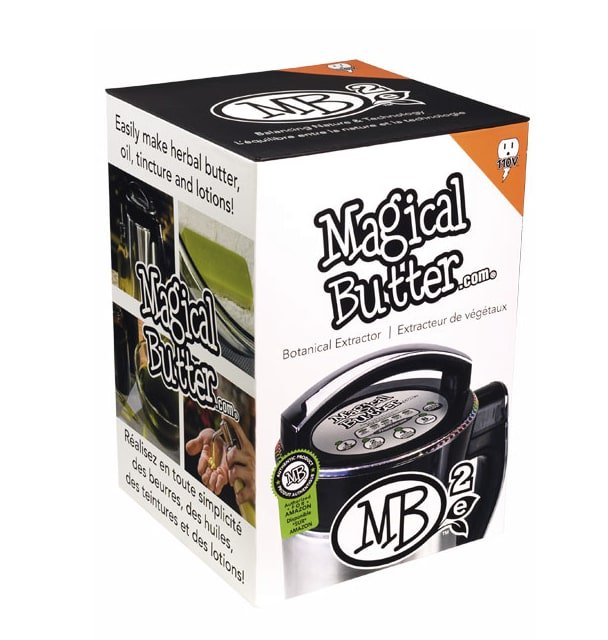 We live in the 21st century, so of course, there is something capable of making marijuana-infused butter creation easier! The Magical Butter machine was originally released a few years ago and it was a godsend for people looking to create edibles. It can make up to five cups of oil or butter per cycle and takes no more than two hours. The MB machine looks a bit like a coffee maker and it includes colorful LED lights and several temperature settings.

In essence, the Magical Butter contains an immersion blender with a heating unit and digital thermostat. You can create a wide range of Magical Butter recipes with minimal labor on your part. It is capable of blending, heating, stirring, grinding and steeping the materials at the right temperature and time intervals. In other words, you can create a Magical Butter machine tincture or oil perfectly every time as all the guess-work is taken out.

Pretty much every Magical Butter review has waxed lyrical about its ease of use and the quality of the cannabutter created. It is also praised for its efficiency. For example, you can add two cups of flowers with some lecithin and peanut oil and get 1.5 cups in total, which equates to a lot of hash brownies. At $175, it isn’t particularly expensive and, in recent times, the Magical Butter 2 butter making machine is garnering the attention it deserves.

Introducing Magical Butter 2 – The Benefits of the New Machine

Don’t let the name fool you, the Magical Butter machine 2 is not a second incarnation. It was called the MB2e upon its release and is still given that name today. You would be forgiven for assuming that it would be a large contraption that is difficult to store or move around. In reality, the Magical Butter machine weighs just 10 pounds and is only 14 inches high, 10 inches wide and 10 inches deep.

One of the most relevant things you’ll read in all Magical Butter Machine 2 reviews is the machine’s ability to get it right every single time. It makes relatively little noise and it doesn’t make your kitchen smell like a pot processing plant. As well as creating cannabutter, the machine can be used to help you make craft spirits or cosmetics!

As you know, it is essential to decarb the weed to ensure compounds such as THCA are transformed into psychoactive THC. Normally, the process involves placing your dry herb on a baking pan and placing it in the oven at around 240 degrees Fahrenheit for around 45 minutes. If you have the Magical Butter machine, simply place your weed in its silicon box designed to fit in toaster ovens.

There is no need to grind up the herbs because the MB2e has a built-in blender. As light as the machine is, it has a solid construction and is a very durable unit. There are five temperature settings in total, but most users prefer the 160-degree setting for cooking. According to the creators, creating cannabutter is as easy as pushing two buttons. Its advert condenses the process like this:

The problem with creating edibles and topicals is that you are using an expensive ingredient, so the last thing you can afford is to mess things up by experimenting. People used to settle for weed brownies because they didn’t want to waste precious product trying out a new kind of edible. With the Magical Butter machine, you get a ton of great recipes and can rest assured that you simply can’t screw things up! 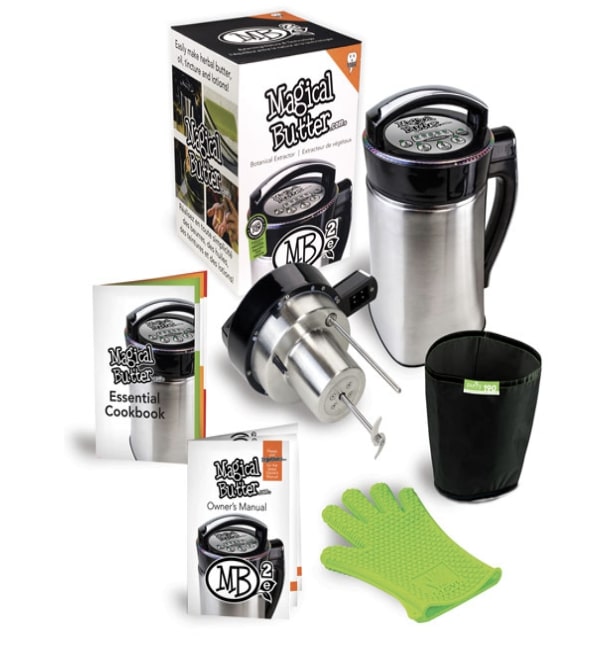 We mentioned its versatility and there is a huge array of Magical Butter machine recipes available online. Here are a couple of our favorites.

Before you dig into the Magical Butter recipe book, it is worth finding out how to create cannabutter itself. You will need the following ingredients: 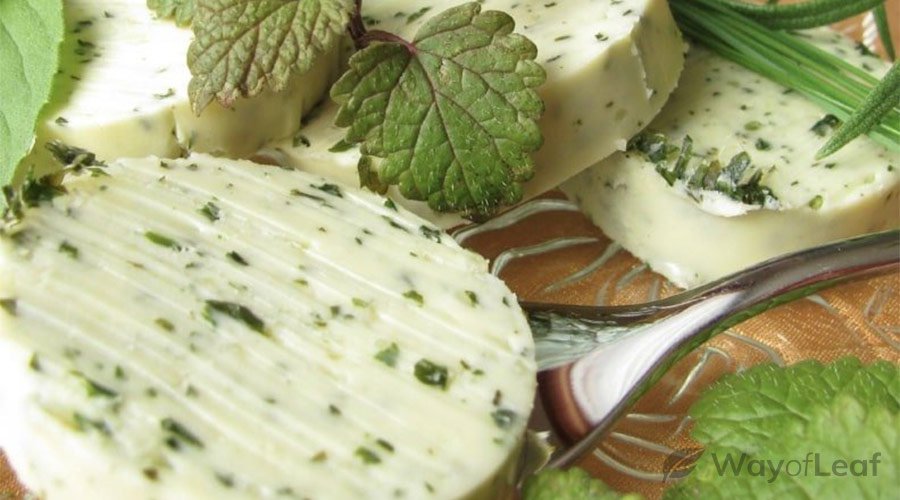 Put the ingredients into the Magical Butter device and secure the head. Press the temperature button and select 160 degrees Fahrenheit. Set the timer for two hours.

Once the cycle is complete, unplug the Magical Butter machine and remove its head. Put on the LoveGlove and pour your mixture through the Purify Filter into storage containers. There are special Magical Butter trays on sale which help you create even molds.

This is one of the simplest tincture recipes you’ll ever come across. Here are the ingredients:

Place the ingredients into the machine and ensure the head is secure. Press the Temperature button and choose 130 degrees Fahrenheit, but note that the company recommends using the 160-degree setting if that is your model’s minimum temperature. You can either choose the 4-hour/Tincture or 8-hour options. The latter offers a stronger flavor. When the cycle is finished, pour the mixture through the Purify Filter and make sure you are wearing the LoveGlove.

There is an impressive list of Magical Butter recipes to choose from and they all have simplicity in common. All you have to do is combine weed with a couple of other ingredients, press the temperature button & set the timer. The Magical Butter machine will do the rest.

When the Magical Butter machine was first released back in 2013, it revolutionized the entire cannabis industry. For the first time, there was a product that made it easy to create cannabutter or weed-infused oils. When Garyn Angel designed the machine to help medical marijuana users (his friend has Crohn’s disease), he didn’t realize what he had unleashed. Five years on and it is still a highly sought-after device. If you believe $175 is too rich for your blood, use a Magical Butter coupon to shave a few dollars off the cost price.

Buy It & Try to Make Some Awesome Butter 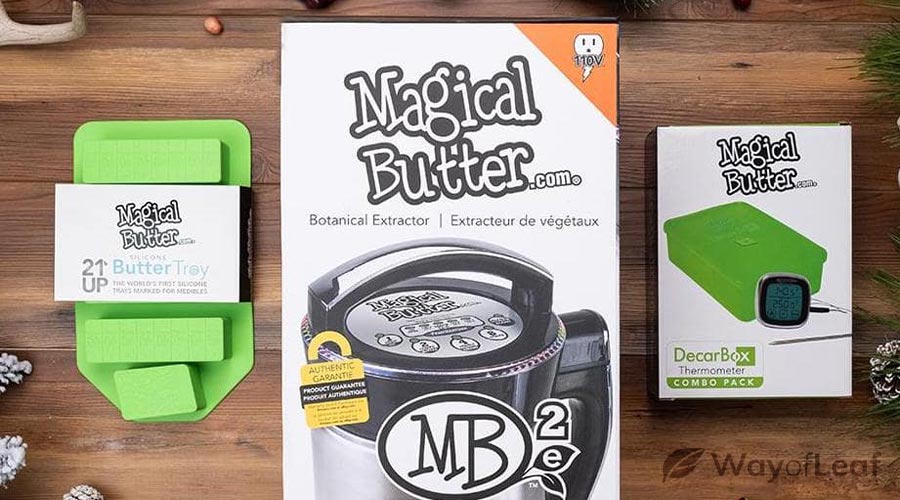 $175 seems like a lot to pay, but it is inexpensive compared to what you get and also to what you pay for concentrates. The Magical Butter machine offers a simplified, efficient, and effective method of creating cannabutter or other marijuana-infused oils or tinctures to help you meet your medical needs. If you want great weed-infused products in as little as two hours with minimal effort, put the Magical Butter machine on your wishlist today.