What You Need to Know About CBD & Obesity

However, it isn’t just an American issue. According to the World Health Organization, global obesity has almost tripled since 1975. Data it took from 2016 showed that 39% of adults were overweight, and 13% were obese[2].

There is a suggestion that CBD could help by perhaps suppressing appetite and increasing the rate of fat burning in the body. We look at the evidence, but first, this guide will define obesity and its associated medical issues.

How Is Obesity Defined?

Obesity is a significantly more complicated condition than many people realize. In 2013, the American Medical Association (AMA) recognized it as a complex, chronic disease that needs medical attention. It involves possessing an excess level of body fat.

It isn’t merely a cosmetic concern. Obese individuals are at higher risk of specific medical issues. There is a misconception that obesity is a matter of weak willpower. In reality, some people are genetically predisposed to gaining weight faster than others. Of course, lifestyle and dietary choices also play a significant role.

An individual is classified as ‘obese’ when their body mass index (BMI) is 30+. There are two methods of calculating BMI:

It isn’t necessary to be as precise as we are above. As a general rule, one inch is 2.54cm, and one kilogram is 2.2 pounds. Here is a guide to BMI classifications:

Incidentally, the WHO has separate obesity classifications for children aged 4 and younger, and those between the ages of 5 and 19.

Critics of the BMI scale point out that it is a relatively crude way to classify obesity. After all, it doesn’t take into account an individual’s body fat reading. Therefore, a fit, healthy, and athletic individual could have an ‘overweight’ classification due to a high level of muscle mass. This is the case even if their body fat level is low.

A study published in BMC Obesity in 2014 made this point. However, according to the researchers, BMI underestimates the level of underweight individuals but also underestimates the prevalence of obesity. This is particularly the case amongst Caucasian males. The study looked at reports which suggested that males with a body fat percentage of 25%+ were overweight. They fall into the obese category once this level exceeds 35%.

Individuals with obesity are at a greater risk of developing a variety of potentially serious health issues. These include:

There is also a possibility of obesity lowering a person’s standard of living. It is not unusual for an obese individual to display one of the following:

In general, overweight and obese individuals are encouraged to follow a regular exercise plan. A typical recommendation is to engage in at least 150 minutes of moderate-intensity exercise each week. Potential activities include swimming, fast walking, or a sport such as basketball or tennis.

It is also essential to follow a healthy eating plan which focuses on fruits, vegetables, and whole grains. Individuals with obesity must avoid alcohol, processed foods, sugar, and saturated fat as much as possible. They should also keep a food journal, and learn more about situations that act as ‘triggers’ for unhelpful eating habits.

Physicians may elect to provide a prescription for an anti-obesity medication, such as:

All of the above are FDA-approved. However, most doctors won’t prescribe such drugs if a patient hasn’t already tried following a healthy diet and exercise plan for a specific period.

In extreme cases, a patient may undergo endoscopic procedures or weight-loss surgery. The former is typically approved for patients who have tried a sensible diet and exercise plan, but still have a BMI of over 30. The latter is generally only for individuals with a BMI of at least 35.

However, in many cases, patients tend to regain a significant amount of fat removed during surgery.

Can CBD Help with Obesity?

CBD potentially aids weight loss due to its effect on the body’s endocannabinoid system (ECS). It responds to different compounds that go into the body via the CB1 and CB2 cannabinoid receptors. CB1 receptors are primarily located in the central nervous system. The main concentration of CB2 receptors is in the body. 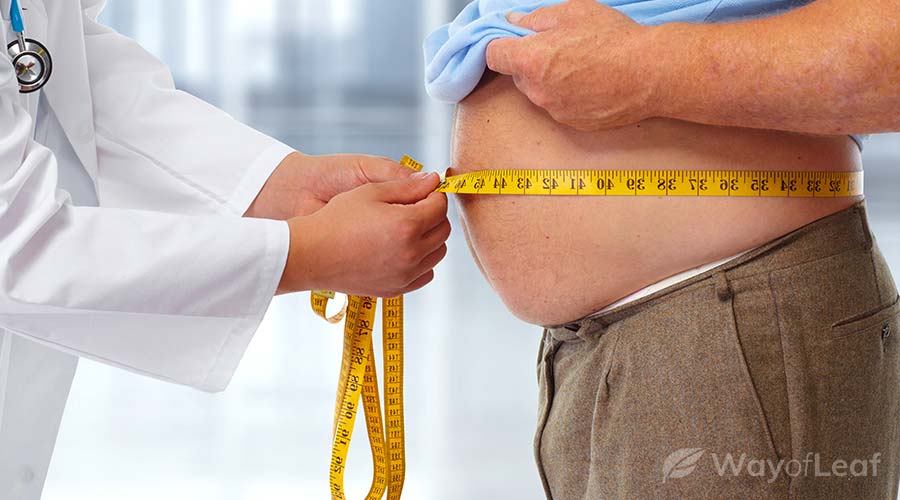 It seems that in obese individuals, however, CB1 receptors become widespread, particularly in their fatty tissue. As a result, it is possible that a link between obesity and CB1 receptor activation exists.

Rather than directly activating CB receptors like THC, CBD helps the body’s endocannabinoids to activate or block off the receptors. The theory is that this process influences significant metabolic disorders or weight loss.

What Are the Claims & Research?

The primary claim is that CBD can help reduce appetite. There is an association between marijuana consumption and increased appetite. This is likely down to the effects of THC. However, it seems less likely that CBD results in a hunger spike.

A study published in the International Journal of Molecular Sciences in September 2019 analyzed the role of cannabinoids in obesity. The researchers discovered that CB1 receptor agonists deactivate the receptor and help reduce appetite.

Although CBD doesn’t specifically perform this function, it could influence other molecules to complete the process. Switching off these receptors could reduce overeating amongst specific individuals.

Elevates the Rate of Fat Burning in the Body

This claim suggests that CBD helps break down fat and then eliminate it from the body. The 2019 study indicates that CBD could turn (bad) white fat cells into brown fat cells. This process then changes how cells act in the body. Brown fat cells may burn off energy as heat and burn calories.

A study published in Molecular and Cellular Biochemistry in May 2016 also suggests that CBD could promote this browning. The researchers determined that CBD did indeed convert white fat cells into brown ones. They also found that the cannabinoid helped the body to break down fats more efficiently.

The mitochondria are the part of the cell responsible for converting fats, sugars, and proteins into energy that cells use. When they aren’t working correctly, it becomes more challenging to provide the body with the energy it needs. It also becomes trickier to lose excess weight. The body takes in energy from food, but the cells find it hard to switch the energy into something useful.

In this situation, the liver converts much of the energy into fat and stores it to stop excess sugar and fat building up in the bloodstream. It leads to us feeling more tired and also gaining fat.

There is a claim that CBD helps increase the activity of the mitochondria, as well as their number. It seems as if the ECS regulates mitochondria’s activity level. If they are working too hard, the ECS slows down production. If the mitochondria aren’t doing enough work, the ECS intervenes. The result is that we remain in a state of homeostasis or metabolic balance.

A study published in The Journal of Neuroscience in 2009 suggests that CBD plays an essential role in modulating mitochondrial function. Once again, it does this indirectly via its regulation of the ECS in general.

It is arguably better to use a full-spectrum product. Although CBD itself may have many uses, there is a belief that a combination of cannabinoids is superior to any single one in isolation.

When using CBD oil for obesity, we are unable to provide accurate advice on dosing at present. Apart from the pharmaceutical drug, Epidiolex, which contains CBD, the FDA has not approved any other product containing the cannabinoid.

As a result, all you can do is follow a general guideline, which is often based on body weight. When using CBD for the first time, it is best to stick with a low-level, which is around 1mg of CBD per 10 pounds of bodyweight. Over time, you can increase it as and when you deem necessary.

There are many consumption methods. However, for individuals using CBD to help them in the long-term, sticking with CBD oil is sufficient. Make sure the seller provides third-party lab reports to confirm the CBD concentration in each product.

Final Thoughts on CBD and Obesity

The level of research into how CBD potentially benefits obesity is growing rapidly. Obesity is a potentially severe disease, and it affects a significant proportion of the planet. While the existing research offers promise, we are not yet at the stage where studies prove CBD’s efficacy for weight loss.

However, it could have an impact on the metabolic system, increase our rate of fat burning, and potentially reduce appetite. Those interested in trying CBD for obesity should consult a doctor if they are currently on any medication. This is because there is the possibility of a drug interaction.

CBD Oil and Breast Feeding [Everything You Need to Know]