Also known as ED, erectile dysfunction has been recognized as a significant issue amongst men since the 1990s. If you suffer from it, your first instinct may be to remain silent. After all, for generations, a lack of understanding led many people to associate ED with reduced masculinity. In reality, though, the condition is more nuanced than that. It can happen for a variety of reasons but is more prevalent in men as they get older.

The 1994 Massachusetts Male Aging Study reported a startling statistic: Prevalence of ED was 52%!

A study by Selvin et al., published in the American Journal of Medicine in February 2007, placed the prevalence of ED in American males at 18.4%. One issue with getting precise data is the variety of ways to assess the condition. We have found various reports and studies that place the prevalence of ED anywhere from 3% to 76.5%! Annual expenditure on ED in America is escalating. It was $185 million in 1994. Within six years, that figure almost doubled to $330 million!

This crude term refers to the notion of marijuana causing ED. As is the case with most things related to weed, there are two very different takes on the issue. Some claim that cannabis kills erections. Others, like Harvard M.D. Dr. Jordan Tishler, believe it is a potential boon to men with erectile dysfunction. One caveat is that you must consume it in a sensible dose.

Before we go any further, let’s begin with an uncomfortable (but brief) outline of the science of erections. An erection comes from the relaxation of the smooth muscle of the corpus cavernosum. This is either of the two masses of erectile tissue that form the main portion of the clitoris or penis. When this muscle is relaxed, blood flow is increased, which leads to an erection. If you have ED, your smooth muscle is not relaxing.

Drugs such as Viagra work by boosting relaxation and helping your erection last longer. Many things must happen before the smooth muscle reaches a state of relaxation. First of all, your penis cells get sensory input from sexual stimulation or from signals that begin in the brain. Once these cells are activated, they produce a gas called nitric oxide.

The gas becomes a signaling messenger to various targets such as cGMP. This is an enzyme that needs to be activated before an erection is possible. After the cessation of nitric oxide production, the enzyme becomes inactive. The smooth muscle no longer relaxes, and you wave goodbye to your erection.

How Does Marijuana Impact the Penis?

Cannabinoids such as THC activate cannabinoid receptors throughout the body, especially the brain. When THC activates these receptors in the brain, it provides you with the famous psychoactive effects. However, it also impacts the rest of the body in ways you can’t even imagine. THC, in particular, can have a profound impact on the human body when it hits the bloodstream, and especially the male penis.

It is here where the impact of weed on the penis, most prominently erections, results in a divergence of opinion. A 1982 study by Cohen, published in the Journal of Psychoactive Drugs, suggested that marijuana use was terrible for erections. According to Cohen’s research, men who used weed daily had twice the prevalence of ED as non-users.

Aversa et al. published a study in 2008 in the International Journal of Impotence Research. It claimed that regular cannabis use was associated with dysfunction in the cells of the corpus cavernosum responsible for producing nitric oxide. When there is a decrease in the production of this gas, you can forget about having an erection, let alone sustaining one.

More recently, Pizzol et al. published a study in the American Journal of Men’s Health in December 2019. It looked at the relationship between ED and marijuana use. The researchers looked at a systematic review of major databases up to January 2019. Overall, they analyzed five case-control studies involving almost 3,400 men. 1,035 of them used marijuana.

The research found that 69.1% of marijuana users had ED. In the control group of non-users, the rate of ED was 34.7%. Ultimately, the research team stated that ED is twice as high in cannabis users than in non-users.

These studies were awful news for men who love marijuana. However, there are numerous problems with this form of research. The main issue is that studies tend to take a broad look at the sexual response, including excitement, desire, and behavior. It is folly to believe you can find a group of men and expect the same levels of arousal by exposing them to the same things. One man’s goddess is another man’s passion killer! 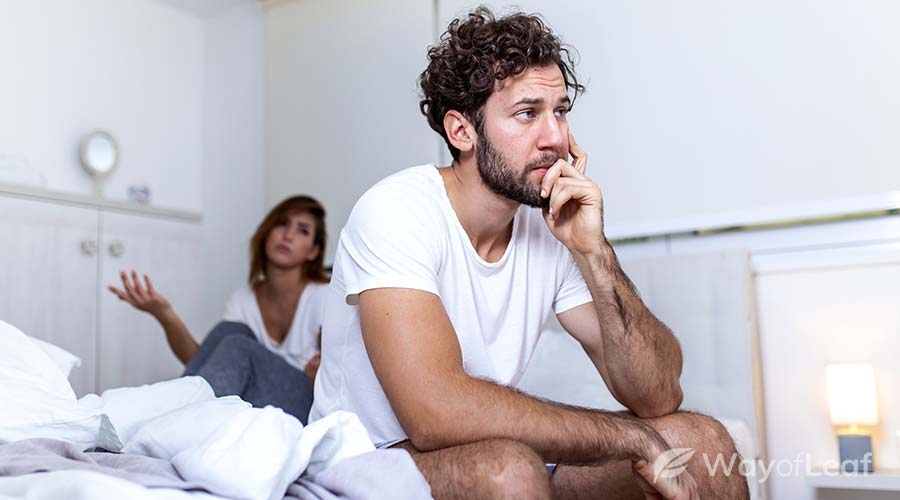 In the 1990s, researchers attempted to circumnavigate this problem by creating the International Index of Erectile Function (IIEF). The purpose of the IIEF was to compare the sexual function spectrum and ED objectively. For instance, it was now possible to compare IIEF scores between men who used cannabis and those who did not.

A study by Kumsar et al., published in the First International Journal of Andrology in 2016, found that weed users and non-users had similar IIEF scores. However, those who used cannabis were still more likely to have severe erectile dysfunction than men who abstained from pot.

They will not let you down…

Cannabis and ED: So, It’s All Bad News Then?

Not at all! The entire issue is extremely confusing. There is ample research that suggests cannabis is potentially suitable for men with ED. A longitudinal study by Halikas et al. was published in the International Journal of the Addictions in 1985. The study focused on 100 regular weed users from 1968-1970. The research team managed to locate and interview 97 of them 6-8 years later. A significant number of weed users said that cannabis enhanced their sexual experience.

Another report, once again involving James Halikas, was published in the Journal of Psychoactive Drugs in 2012. The authors determined that a majority of males viewed marijuana as a ‘sexual stimulant.’ The report mentioned Halikas’ 1985 study but also focused on research from the previous 15 years.

It discovered that men who used marijuana believed it increased their desire to have sexual intercourse. On the downside, the report noted that there was evidence of cannabis use causing problems. These included reduced sperm count, potency problems, and decreasing levels of testosterone.

Dr. Tishler noted these concerns, yet remains adamant that almost all sexual issues respond well when treated with cannabis. These problems include ED, low libido, and premature ejaculation. He was keen to point out that the dosage was all-important. According to Dr. Tishler, it is tough to keep an erection “when your head is orbiting Jupiter.”

His advice is to be wary of the dose because it is a personal thing. We all have different reactions to weed, as well as varying tolerance levels. Overall, Dr. Tishler said that low doses were ideal for men, while women can handle higher doses. He also believes that inhalation through vaping is the best method of consumption. Sharing a vape makes for excellent foreplay, and is less likely to burn down the house!

Although research into the topic remains limited, it seems likely that excessive consumption causes more harm than good to erections. If you have ED and are looking for something to breathe new life into your sexual experiences, consider using a low dose of weed.

Although Dr. Tishler recommends vaping, he is also happy for men to use topicals. Please note that it can take longer for the effects to kick in. Products such as CannaMojo help with ED, and they are selling well.

Proponents claim that THC-infused sex supplements provide results akin to what Viagra promises, only with fewer side effects.

The availability of these products is limited at present. However, as the market grows, and more men look for solutions, we expect more options to become available.

The 2022 Tax Guide for Cannabis Businesses

Shake and Trim: The Difference Between These Types of Weed