A 2018 study conducted at Duke University Medical Center has found that regular marijuana use is associated with changes in the genetic profile of sperm. This research is timely, as cannabis legalization is now spreading at an exponential rate.

Although the herb is known to have many medicinal benefits and is considered safe, there are several side effects associated with smoking cannabis, and the long-term effects are still unclear. The results of this new study suggest that frequent marijuana use may affect sperm, although its implications are unclear.

The study, carried out by researchers Kollins et al., published in Epigenetics, looked at the effects of THC exposure in rats and 24 human subjects. First, they noted that cannabis users (humans) had lower sperm counts than non-users.

They also discovered that THC seemed to disrupt a process known as DNA methylation, which is vital for healthy development. This process was altered in thousands of different genes, all of which were involved in two particular cellular pathways. The first pathway was associated with ensuring that organs reach their full size, and the second was linked to growth during development.

The results showed that the subjects with higher THC levels in their urine had a higher incidence of genetic changes. Although the correlation appears to be clear, we still do not know precisely what these findings mean for men who use cannabis and are thinking about starting a family. Regarding the study results, the senior author, Scott Kollins, Ph.D., a professor in psychiatry and behavioral sciences at Duke, stated:

“We don’t yet know what that [the research] means, but the fact that more and more young males of child-bearing age have legal access to cannabis is something we should be thinking about.”

Its small sample size limited the study itself, and there are plans to carry out a larger-scale trial in the future. The authors also intend to investigate whether these genetic changes are reversible and study the effects on the offspring of marijuana users by analyzing blood from newborn babies’ umbilical cords.

For men who wish to conceive, sperm count is an important factor to consider, along with sperm morphology and motility. Every drop of semen contains millions of tiny sperm, and anything below 15 million sperm per milliliter is considered suboptimal for fertility. 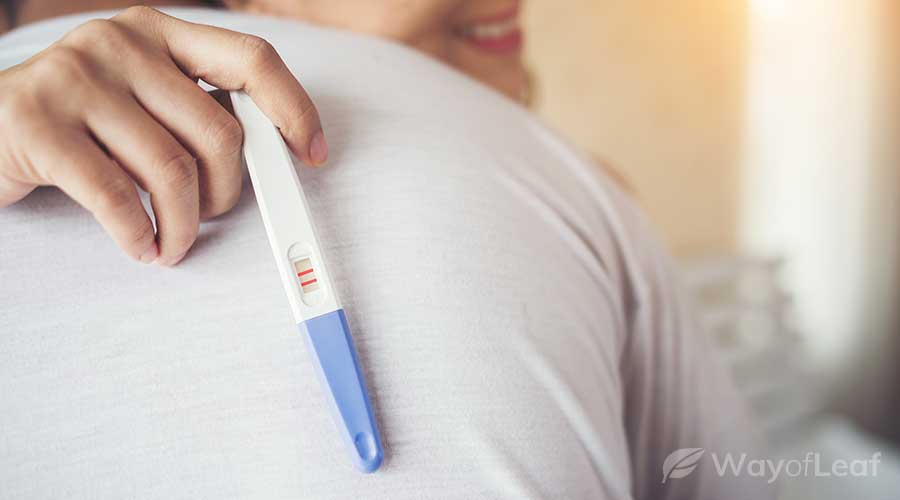 To learn more about whether cannabis affects sperm count, we need to look to a Danish study published in 2015.

Sperm concentration and count were decreased further in those who had also used other recreational drugs to 52% and 55%, respectively. The study also found that the participants who smoked marijuana had higher testosterone levels than their counterparts.

Another paper published in 2014 found that marijuana use was a risk factor for poor sperm morphology, which refers to the size and shape of sperm, whether they are healthy, deformed, too big, or too small.

All the available research suggests that cannabis has an effect on sperm, but what causes these effects? The answer could well lie within the endocannabinoid system.

The Endocannabinoid System, Development, and Fertility

The endocannabinoid system is responsible for many of our vital biological functions. It contains receptors known as CB1 receptors, found primarily in the central nervous system and the brain, and CB2 receptors found elsewhere in the body.

These receptors can bind with chemicals known as endocannabinoids, triggering a complex series of reactions throughout the body and brain. These cannabinoid receptors can also interact with the THC and CBD found in cannabis.

The endocannabinoid system is believed to be responsible for maintaining homeostasis and playing a role in regulating our mood, memory, movement, and thought processes.

The endocannabinoid system may also play a part in the development of the brain. CB1 receptors are prevalent in areas of the brain such as the hippocampus, which is responsible for memory and learning, the basal ganglia, and the cerebellum, which control motor function.

Apart from being important for healthy development, the endocannabinoid system also plays a crucial role in the functioning of sperm.

There is also some evidence that there are differences in the endocannabinoid systems found in the sperm of infertile men compared with their fertile peers. The authors of that particular study say that their research “identified unprecedented alterations of the ECS in infertile sperm, that might impact on capacitation and acrosome reaction, and hence fertilization outcomes.”

It is still unclear precisely what long-term risks smoking cannabis poses to the next generation and whether any adverse effects are reversible over time. What is clear is that far more research is needed to establish the relationship between cannabis and fertility and allow people to make informed choices about their lifestyles.

Until more is known for sure about this link, it would be wise for anyone thinking about starting a family, male or female, to quit smoking cannabis well before trying to become pregnant.

Related article
Smoking Weed During Pregnancy: What Are the Risks? [ANSWERED]