Written by Editorial Team
4 min read
0 comments
Read Later
All information on this website is for general informational purposes only and is not intended or implied to be a substitute for professional medical advice, diagnosis or treatment.
LA Kush Strain Overview
LA Kush is an indica-dominant hybrid that first blossomed in Los Angeles, California – hence the name. It’s an 80/20 hybrid strain with an unknown breeding origin. It boasts high levels of THC so newbies should be mindful of the dose. 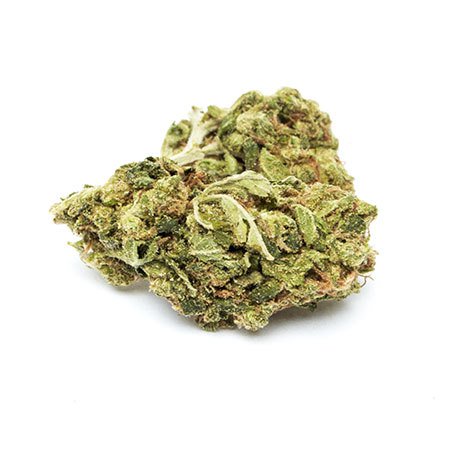 The west coast is famous for wonderful days of sunshine, tans, and toned bodies – some may even consider it to be heaven on earth. After all, it’s not known as the Golden State for nothing.

Add a bit of LA Kush to your day, and the light and happy high will have you and your crowd feeling like the sun is beaming down upon you and that California gold is at your fingertips.

As you may have guessed, this delightful strain originated on the California coast and is now one of the most loved strains on the coast. LA Kush has somewhat of an unknown past, but this doesn’t influence its likeability or enjoyability as both a medical and recreational strain.

What Is LA Kush Marijuana?

Originating out of Los Angeles, California, LA Kush is an indica-dominant hybrid strain with obscure genetic roots. While it almost certainly descended from the prestigious OG Kush, the exact genetics are unclear. Most believe it to be a variety of OG Kush that was created as a select phenotype of Abusive OG. However, the exact parentage is extensively debated by industry connoisseurs, maintaining its mystery.

The exact parentage is extensively debated by industry connoisseurs, maintaining its mystery.

Despite its unknown origins, LA Kush is popular among enthusiasts, especially for the way it manages to produce a classically heavy Kush body high without it being overly drowsy. It has an average of 20% THC and brings a 90/10 indica-blend to the table, offering users a very uplifted, but body heavy high. The CBD levels are less than 1%. 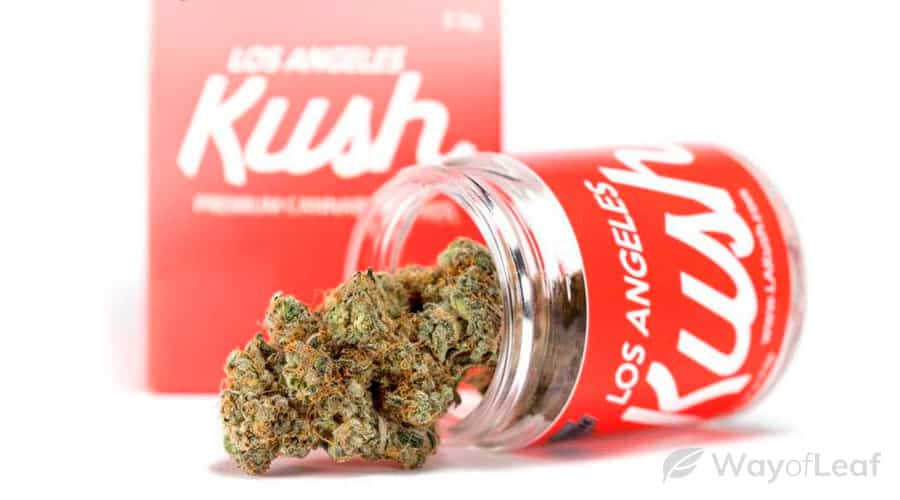 Thanks to its high THC level, LA Kush has some great medicinal potential and is also a solid recreational choice for those looking to have a lazy afternoon. This strain allows users all of the same benefits as an indica body buzz, but without the vegetative state that it often induces.

Many users enjoy this strain because it leaves them feeling energized, which makes it a great choice for daytime use since it can keep you on your toes right from the start of the day. It can also add a sprinkle of happiness into your actions and thoughts, inspiring you to stay in a good mood.

The LA Kush strain has quite a powerful and pleasant aroma, featuring the usual Kush skunk and earth, but combined with a strong mint and pine flavor. It’s lush and fragrant with a distinct sour and earthy aromatic profile that it’s well-known for.

As we already mentioned, it also smells strongly like pine, mixed with a tad of sweetness that can often make you think of fresh berries.

The LA Kush flavor is just as seductive as the aroma. On the inhale, users taste a berry mixed with lavender flavor that is sweet on the tongue. On the exhale, you will notice a lingering undertone to the smoke, and it’s likely to leave a pine and citrus aftertaste on the lips.

LA Kush is known for its small, dense nuggets of deep green, featuring significant clear trichome coverage. Growers love the plant for its glossy look. It has glistening, frosty trichomes that cover a beautiful ombre of green bud with dark orange hairs.

LA Kush is one of those strains that can be easy to grow, even for growers with little experience. It’s highly resistant to pests as well as common molds and can grow into a healthy plant in both indoor and outdoor environments.

Indoors, LA Kush can yield about 12 ounces per square meter, and takes about 8 to 9 weeks to flower before it’s ready for harvest.

When grown outdoors, you can expect a yield of approximately 13 ounces per plant. You can prepare for harvest around the middle of October.

The typical LA Kush THC level is between 19-21%. However, tests have found strains that contain up to 26%.

There’s not much information available on the CBD content level of LA Kush, but it’s not believed to exceed 1%.

Thanks to its mood raising properties, LA Kush is perfect for anyone wanting to relieve symptoms of depression or anxiety. It’s a good strain for treating chronic and severe depression, enabling patients to process their thoughts in a reasonable manner.

It’s also great for alleviating tension and putting users into a tranquil state. If you are a dedicated smoker, this won’t have an effect on functionality and is great to use any time of day.

LA Kush is also a great strain for muscle soreness and mild aches and pains. Users have even experienced relief from mild bouts of lack of appetite.

Here’s an overview of the LA Kush medicinal properties:

Possible Side Effects of LA Kush

This tasty strain may have some adverse side effects because of the high THC levels. It’s likely that this strain will leave your mouth feeling dry, causing you to feel a bit parched after smoking. Remembering to hydrate can significantly reduce these effects.

LA Kush may give some people dry and irritated eyes. Some have also reported feeling dizzy after smoking this strain, and there’s also the possibility of becoming slightly anxious. On rare occasions, you may experience a mild headache after using this bud.

LA Kush brings all the benefits of an indica body buzz, but it doesn’t come with any of the pitfalls of feeling weighed down. Instead, it offers all the joys of a light head high without the headaches that are often linked to indica strains.

LA Kush is a staple in the local industry and is very much loved for its pain-relieving and mood-lifting properties.

It’s a strain that induces moderate cerebral euphoria, which is followed by relaxation. You can expect a boost in energy, enhanced creativity, and stress relief after smoking this bud. LA Kush is a staple in the local industry and is very much loved for its pain-relieving and mood-lifting properties that are popular for both medicinal and recreational reasons.