Written by Editorial Team
7 min read
1 comments
Cheese Strain Overview
The Cheese strain is a sophisticated strain that tastes much like a cheese eaten with a fine wine. It is nutty, earthy, and cheddar-like, giving for an interesting and hearty smoke. Cheese is also great for kicking back and relaxing, which often ends up in a deep slumber, so it’s perfect for evening use. 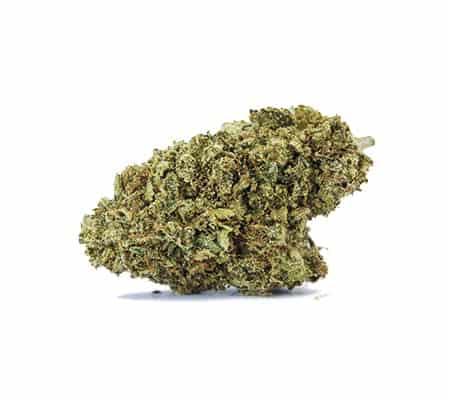 Of all the varieties of cannabis out there, the Cheese strain might be the strangest. An indica dominant hybrid initially bred in the UK, this strain is named for its distinctive aroma and flavor that is exactly like pungent cheese.

Despite the apparent oddness that a cannabis strain could be both named for and taste like Cheese, it is actually one of the most popular strains out there, possessing a stellar reputation that cannabis lovers the world over look for whenever they can.

Let’s investigate the Cheese strain and figure out why it is so popular despite its inherent strangeness.

What Is the Cheese Cannabis Strain?

Of the many types of cheese available from the UK, by far the most popular is cheddar. This fantastic, classic cheese is known worldwide for its pungency and nutty flavor, making an excellent base for eating or cheese toasties alike.

It thus makes a lot of sense that the Cheese cannabis strain was bred to smell as similar as possible to cheddar – if you are going to make a cheesy cannabis strain, you might as well make it identical to a famous cheese, right?

Cheese is well known for its potent effects as well as its distinctive flavor. First appearing in 1988 by a mysterious grower, this strain is reportedly descended from Skunk #1, as well as possibly mixed with Afghani landrace strains to try and increase its total trichome production. This resultant hybrid is famous for its ability to leave you in a happy, contended mental state.

The initial effects of Cheese are intense relaxation and uplift in mood. Even though this strain is ostensibly 80% indica, the overwhelming sensation is one of extraordinary sativa influence. You will feel both happy and overall elated, improving your outlook on life massively, as well as just generally making your day better.

After a short while, the high will shift into pure euphoria that will persist for the remainder of the high, encouraging you to try and achieve your goals and just generally keep going.

By far the biggest impediment to this, however, will be the overwhelming sensation of pure hunger. You will feel the munchies possibly harder than you ever have before; it is a common joke that Cheese cannabis is single handedly responsible for great cheese sales in the UK – there is nothing you will want more than a sizeable snack, preferably loaded with cheese.

Once you have sated your intense hunger, you will begin to feel a great body melt that makes you feel both intensely calm and relaxed at the same time. One of the best qualities of Cheese is its ability to so perfectly meld the feelings of both indica and sativa effects – you will feel both incredibly relaxed in the body, yet somehow still so empowered in your mind.

All of this is reinforced by its incredible flavor, almost artificial in its cheesiness. This strain is one that manages to combine the wonderful British pastime of consuming copious amounts of cheese and the intense desire to relax contentedly in front of the TV.

Though the precise lineage of Cheese isn’t completely clear, it remains one of the most powerful and well known cannabis strains available. So, how is the actual aroma and flavor of Cheese classified? Besides the apparent quality of ‘Cheese,’ how can this strain be best described?

As dull as it might be to consider, the overwhelming aroma that exists from the Cheese strain is one of intense, nutty cheese.

However, in the same way, that the simple classification of ‘wood’ or ‘berries’ is insufficient to describe the inherent complexity of many flavors, just using the word ‘Cheese’ isn’t good enough.

As any cheese aficionado knows, cheese comes in a multitude of different flavors, strengths, and varieties. The Cheese cannabis strain has a clear inspiration point in cheddar cheese, which means that the primary aromas are ones of nuttiness and subtle complexities.

The earthy aroma of cheese is surprisingly complex, conjuring up images of an elegant British cheese plate, as well as ones of a smoky, nutty fire.

The aroma is immediately noticeable from across the room, offering an immediate signal to any experienced cannabis users that there is some Cheese nearby – this can be either a blessing or a curse depending on the greediness of those around you.

The aroma of Cheese is simple enough, so what about the flavor?

Upon your very first taste of Cheese, you might be inclined to believe that the flavor is precisely the same as the aroma – there are the same notes of intense cheesiness, the nutty brown qualities of a good, rich cheddar.

However, the flavor matures as you continue to smoke it, offering a profoundly distinct flavor profile from the aroma.

While the aroma can be considered relatively simplistic, the taste of Cheese has an oddly specific quality about it, offering a cheesy experience that is difficult to describe adequately.

It doesn’t just taste like a mature cheddar; it somehow tastes like the things commonly associated with cheddar, like a well-cooked grilled cheese or a sour chutney. There is an earthy pungency that backs up this oddly rich flavor, leaving you feeling like you have actually eaten a complex, rich and nutty cheddar for lunch. The inherent umami quality of this strain greatly contrasts with what you would typically expect from a strain like Cheese.

Though the flavor and aroma of Cheese is profoundly interesting, the presentation is decidedly dull and boring.

As a heavily indica dominant hybrid, the appearance of Cheese is distinctly indica, with its clustered bud and the plant’s tendency to grow laterally when properly pruned. 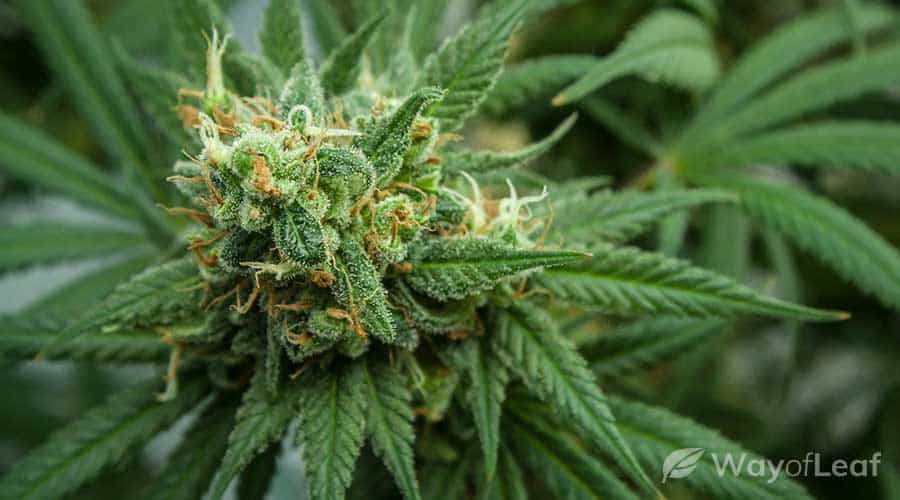 Due to its strong indica genetics, Cheese can be safely treated just like an indica in growing techniques. This means growing it indoors with Screen of Green methods so as to encourage adequate growth potential.

This strain can tend to grow rather spindly, due to the branches propensity towards growing into itself – to combat this, try and tie this strain’s stalks to a trellis as it grows, ensuring it grows logically and consistently.

This is also a great way to make sure the plant doesn’t overcrowd itself; to reinforce this, make sure you trim away any growths underneath the bush, as these will be typically under-sunned and not be likely to produce a high quality of bud.

By ensuring the pant allocates its resources to its uppermost branches, and by providing it gets suitable sunlight and feeding, you can ensure a hefty yield of this uniquely tasty strain.

Cheese is an overall pretty simple strain to grow yourself, so consider using this strain as an introduction to the world of growing your own marijuana.

Once you have harvested your Cheese, what kind of THC content can you expect from your yield?

As might be expected from such a potent strain like Cheese, you can expect an extremely high quantity of THC from your Cheese yield.

Generally speaking, Cheese can hit between 15% and 20% THC content, depending on its growing conditions and individual plant clones.

This compares very favorably to the general Indica average of 12% or so, making this strain an excellent choice for those looking for a potent and enjoyable experience.

As with most THC-rich strains, Cheese has a rather depressingly low quantity of CBD.

You can expect between 0.7% and 1% CBD content, making this strain not a great choice for those looking for CBD medical benefits.

So, if you can’t look forward to potent CBD medicinal effects, what kind of medical benefits can you expect from Cheese?

Despite the intensely unique flavor and aroma of the Cheese cannabis strain, the therapeutic effects are actually fairly typical of other indica-dominant hybrids.

By far the most useful therapeutic effect of Cheese is in treating stress. Due to its excellent relaxant properties, Cheese is a terrific strain for helping get rid of the woes and pressures of the real world.

Within a single puff of this potent strain, you will find your worries melting away.

Additionally, the intense body high that settles in overtime makes Cheese a great way to deal with pain, both chronic and temporary. If you find yourself with an aching back or just generally suffering from a myriad of pains after a long day, Cheese is excellent at helping you to forget the pain and enjoy yourself.

As with all indicas, you can also expect a powerful mental effect that is effective at treating issues arising from depression and anxiety as well that horrendously annoying condition of insomnia.

However, by far the most useful condition able to be treated by Cheese is a lack of appetite.

Whether it is a mental disorder that is causing an inability to desire food, or if it is something more physical like chemotherapy, Cheese is an excellent way to help inspire a desire for food, regardless of how un-hungry you might be.

No matter what your problem is with appetite, Cheese will be sure to have you eating whatever you can find before you know what is happening to you.

Despite all these useful medical effects, there is undoubtedly going to be some kind of side effects associated with using Cheese, right?

Possible Side Effects of Cheese Strain

The side effects of Cheese are thankfully painfully regular and expected, just like its medicinal effects, rather than being unique and district, as its flavor.

You can expect the pretty standard dry mouth and dry eyes associated with most indica strains, as well as a slightly increased propensity for paranoia.

However, this latter condition is only really a problem if you are taking Cheese in exceptionally high doses – unless you have a natural tendency towards paranoia for indicas, you can safely take Cheese without any real problems.

There is still the small likelihood of dizziness and headaches as well, but this is again associated with excess usage of this potent indica.

Despite how strange it might seem to consider, Cheese cannabis is an incredibly potent, wonderfully tasting Indica dominant hybrid. With effects that are sure to both utterly relax you and invigorate you at the same time, Cheese is well known for its ability to help utterly destroy feelings of low self-worth or stress.

Combine its great effects with its incredibly pungent, uniquely nutty Cheddar flavor, and you end up with a strain born and bred in the UK that is now one of the most famous strains of cannabis in the world.

Though it might seem weird to consider smoking marijuana that smells and tastes like cheese, it is perhaps one of the most unique and enjoyable marijuana experiences you can find.

Though it is usually cheesy to call marijuana strains an out of this world experience, in the case of this one of a kind strain, it is entirely appropriate – Cheese cannabis is utterly cheesy and utterly out of this world.

This potent strain is pure gold