At the time of writing, it is legal to cultivate marijuana at home in 21 states plus D.C. However, in several states, such as Rhode Island, Oklahoma, and New Mexico, you can only grow cannabis for medicinal reasons. It’s great news for cannabis enthusiasts who are now allowed by state law to cultivate at home for either recreational or medicinal purposes.

Despite the growth of marijuana cultivation across the United States, there are still relatively few places where you can benefit from a one-to-one consultation. You can take a trip to see seed/clone retailers or hydroponics stores. However, these organizations will likely steer you towards non-soil growing mediums, pesticides, and synthetic fertilizers.

It’s like a broker recommending shares in a stock when he receives a commission from the company for doing so. These stores make the sale, but you don’t necessarily receive the best advice or products. Fortunately, there is an increasing number of retailers that follow the organic growing approach. Growing marijuana organically is something we wholeheartedly recommend at WayofLeaf.

It would be remiss of us to disregard synthetic fertilizers completely. However, the fact remains that you can get better yields, higher cannabinoid content, and improved flavor by going organic. Best of all, it costs a lot less, too! People have grown marijuana naturally for thousands of years.

Growing organic cannabis was never an issue until marijuana was made illegal in the 1930s.

By the 1970s, a significant proportion of weed was grown indoors because cultivators knew they faced severe penalties if caught. Initially, it had a negative effect on potency and yield. As a result, growers used chemical fertilizers to grow cannabis. Grow spaces were confined areas susceptible to attack from pests. This meant that the use of further chemicals, in the form of pesticides, were needed.

With the change in legislation in certain states, clandestine growing is no longer required. As a consequence, it is now possible to revert to the days of organic growing. Keep reading to learn how easy and inexpensive it is to grow organic weed in the comfort of your home.

How to Grow Organic Cannabis

One of the great things about organic cannabis farming is how simple and flexible it is. The definition of ‘organic’ is a topic that continues to spark much debate. Some say that true organic farming involves plants grown from non-GMO seeds, without the use of pesticides and synthetic fertilizers.

Jeff Lowenfels, a graduate from Harvard Law School, is often credited with increasing interest in growing marijuana organically. Lowenfels said that organic growth is all about a plant’s natural life cycle and the microorganisms that make up the soil food web. 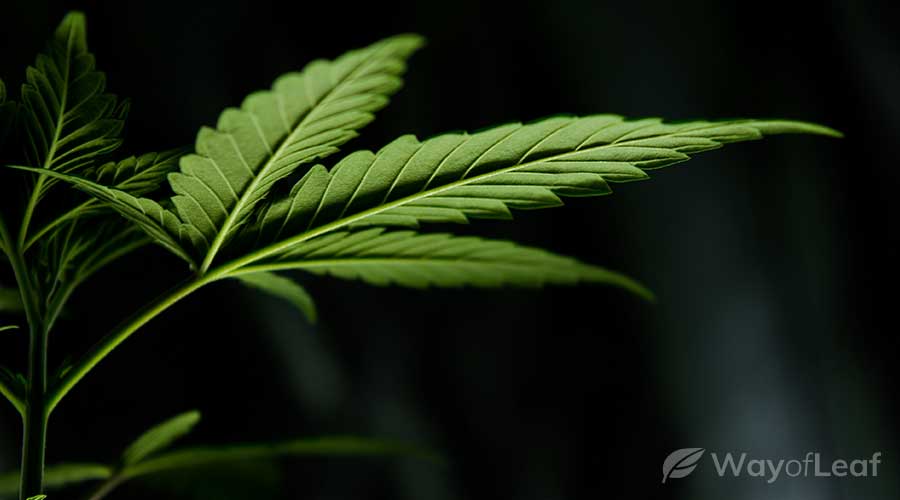 A simple example of the concept is fertilizing a lawn in spring using leaves that fell in autumn and winter. The microorganisms that live in the soil play a massive role in organic gardening. They produce nutrients for your plants from waste and other compounds found in the soil. It is a natural process that removes harmful waste, and aids in feeding the plants.

Overall, we feel that there is a lack of regulation in terms of what dictates true organic farming. Technically, it is impossible to grow organically indoors since it involves growing in an enclosed system. However, unless you are an industry professional, it merely becomes a matter of preference.

Related article
Dispensary Marijuana Versus Growing Your Own

We look at the pros and cons…

The Importance of High-Quality Soil

Firstly, you need an all-natural soil medium. Without high-quality organic potting soil, you can forget about achieving a successful organic grow. Everything starts with this ‘soil food web.’ As organic fertilizers are made from animal and plant waste, you need to consider soil amendments. Examples of these include perlite, fish emulsion, bat guano, earthworm castings, and compost.

Creating a super soil is not an easy task, and is something that novices may find tricky. On the plus side, you can avail of numerous ‘recipes’ online. We believe it is best to keep things simple and narrow your options down to two.

You can purchase premixed organic soils, which are great for new growers. Aside from watering, such mixes require little maintenance. Organic soils seldom need pH adjustments and can provide your marijuana plants with all the nutrients they need.

The second option is to create DIY super soil. This should be the preserve of experienced growers because it takes time, patience, and knowledge to get the right mix. The first step is to find the right base soil. High-quality organic soils usually are rather expensive. They should also contain ingredients such as those mentioned above, along with glacial rock dust, coco fiber, pumice, and soybean meal.

If you can’t find soil with enough nutrients, you must add your own. It isn’t enough to know what to add; you also must know the right ratios. This is why we recommend premixed organic soil!

Even when you have the right organic soil, it is essential to treat the whole growing environment as one ecosystem. This means keeping the right balance between soil, temperature, humidity, airflow, grow lights, and ventilation. It should be easier to achieve this delicate balance when growing outdoors.

If you are an indoor grower, on the other hand, it is much trickier. Although it depends on the individual marijuana strain, most weed types fare well in temperatures of between 65-80 degrees Fahrenheit. Keep humidity at around 60-65% during the vegetative stage, and lower it by 10-15% during flowering. Invest in a hygrometer and thermometer, which you can use to check humidity and temperature levels regularly.

Use temperature control and ventilation to keep everything balanced. With non-organic systems such as hydroponics, maintaining the right nutrient levels is a burden. You’ll be pleased to know that it isn’t the case with organic cannabis.

What Should You Feed Your Organic Cannabis?

Hydroponics mainly involves deciding which nutrients to use, with an emphasis on finding the right ratio. On the other hand, using the right water is essential when growing organic cannabis. We advise you to steer clear of tap water. Many municipal supplies are laden with chemicals, such as fluoride, that kill ‘good’ bacteria in the soil.

According to a NDRC report, approximately 77 million Americans are served by water systems that report violations of the 2015 Safe Drinking Act. It is safe to say that this water is also not suitable for plants. For the record, Texas, Florida, and Pennsylvania had the most offenses.

Experts recommend investing in a reverse osmosis (RO) system. A RO system purifies water, making it safe for you and your marijuana plants to drink. RO systems remove pollutants such as fluoride, sulfates, bacteria, pesticides, and much more from the water.

Aside from clean water, organic supplements can make a massive difference in the growing process. Aerated compost teas are excellent because they reintroduce living microorganisms to your soil. As a result, processes such as fighting pathogens, and turning them into nutrients, take place.

Mycorrhizal fungi can be added to soil because they boost nutrient and water intake at the roots of your organic plants. You can add a small sprinkling of these beneficial fungi to the soil at the beginning of the vegetative stage. This can help you achieve a more favorable result.

Marijuana requires Nitrogen (N), Phosphorus (P), and Potassium (K), throughout the growing process. As a rule of thumb, plants need more nitrogen during the vegetative stage and more phosphorus during flowering. It is also a good idea not to add nutrients two weeks before harvesting to avoid a nasty fertilizer taste. Don’t forget secondary nutrients such as calcium, manganese, and magnesium. Carbon dioxide is also essential.

When you add synthetic supplements, you must remember that they work on a ‘supply-lock’ basis. What this means is that they continue providing nutrients until the plant stops allowing them. The excess passes through the soil and drains off with water. With organic soils, you don’t need additional supplements because your plants already have everything they need.

Related article
The Most Popular Fertilizers for Growing Cannabis [Guide]

Some of the best fertilizers a…

We strongly urge you to refrain from using synthetic insecticides because you can ruin the taste of the crop. Also, inhaling these chemicals is very bad for your health. Unnatural pesticides damage the soil. If it is saturated with chemicals near harvest time, you face a desperate race against time to ‘flush’ the soil. If you don’t, then the crop is unusable.

Such soils also need to be tilled, tossed, or remixed if they are to be used next season. With organic soils, you are dealing with a living entity, which means no tilling, etc. is required. Just remove the root ball, add some mycorrhizal fungi, and the soil is ready to be used again!

As for dealing with pests, you have the option of creating homemade remedies. Sprays made with neem oil, in particular, are incredibly adept at killing pests and discouraging others. Other usable mixtures include garlic, coriander, and cinnamon. Bacillus thuringiensis, better known as BT, and diatomaceous earth, also known as DE, also work wonderfully against pests.

Companion planting is another great way to deal with pests. These are plants known for their ability to repel certain pests naturally. For example, marigolds are effective at dealing with aphids, while gnats hate basil and dill. Perform a quick search online, and you’ll find that there is a companion plant for almost every common pest.

Don’t succumb to the temptation of using synthetic fertilizers or pesticides. You probably think it is the ‘easier’ option, but it isn’t. Growing cannabis organically is easier than you think. It is also cheaper and ensures your soil isn’t filled with salt and chemicals. If there is too much salt or chemicals in your soil, they can cause a nutrient lockout. The result is nutrient deficiencies, lower yields, less potent buds, and cannabis that doesn’t taste right.

When you go organic, your soil will love the extra care and attention it receives.

It makes no sense to continue using synthetic ingredients when you can grow organic marijuana instead. Throughout history, cannabis was grown naturally, and as you can see from this guide, you don’t need that much expertise.

The explosion in marijuana growing in the United States means there is ample information available regarding growing organically. There is also a lot of information which lets you know the necessary tools and ingredients that you’ll need. In the end, you get better tasting cannabis that’s likely to be more potent and save money in the bargain. What’s not to like?

Here Are The Best Feminized Cannabis Seeds On The Market

The best feminized seeds around

Be aware of the risks

Backcross Breeding Cannabis: What is It, And How to Do It?

Why backcrossing is vital in the creation of new strains

Our guide to growing this fruity strain

The 5 Easiest Cannabis Strains to Cultivate

Everything you need to produce a successful first harvest

Your Guide to Autoflowering Marijuana Strains

They literally grow themselves