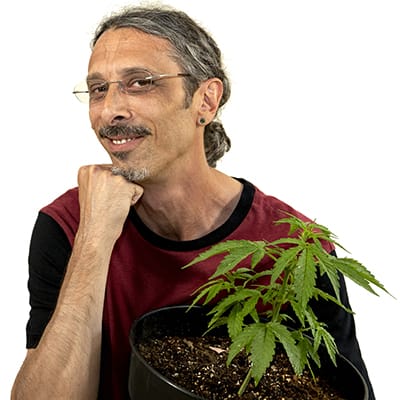 Kyle Kushman is an international cannabis educator, emissary and cultivator whose collaborations have earned 13 Medical Cannabis Cup awards, including three US Cannabis Cups for Best Flower.

Kyle’s journey with cannabis began the exact same way as thousands of others: with Monty Python, Doritos and Slim Jims. He grew his first plants in a closet with some very rudimentary equipment, but the buds he grew, as he tells it ‘were the size of soda cans.’

His supercropping techniques have changed the way people tend to their plants and maximize yields. There are numerous published articles that detail Kyle and his innovative methods.

In 2018, Kyle was awarded Cultivator of the Year by Green State and San Francisco Chronicle.

After working in the Q&A section of the High Times website for several years, Kyle was hired as a staff journalist and cultivation expert for the High Times magazine. He continued to write for High Times for over 20 years, but now focuses much of his creative energy writing for Homegrown Cannabis Co – a California-based seedbank with a big focus on education and information.

In 2004, Kyle left his New York home and headed west, to California and legalization.

He started Karma Consulting in 2006; a consulting service for Proposition 215 medicinal cannabis gardens.

You can buy his feminized cannabis seeds at Homegrown Cannabis Co, part of their elite Cultivars with Character range (which also includes Steve DeAngelo, Swami Chaitanya and Nikki Lastreto).

This year, Kyle will also be launching Cultivar, a Premium Veganic line of cannabis flower.

In 2019 Kushman was awarded the 420 Icon Award by Cannabis Business Awards.

Kyle had a huge role in the 2018 Netflix Series, Explained (Weed), directed by Kevin Smith.

Vegamatrix appeared in the Netflix series, Disjointed, and was used in the Vice Series, Bong Appetite along with Kushman’s Flowers.

Kyle created a free Beginner’s Guide to growing cannabis in 2019, in collaboration with the Homegrown Cannabis Co. This 14-part series can be found on Youtube and Vimeo, as well as Kyle’s Grow Your Own section on the Homegrown website.

All you need to know to get started...