Written by Editorial Team
7 min read
11 comments
Read Later
Top Product Overview
The Blu ACE™ Vaporizer is a refillable vape device which has been especially popular with beginners. Its simple design and automatic heat control makes it easy to use. 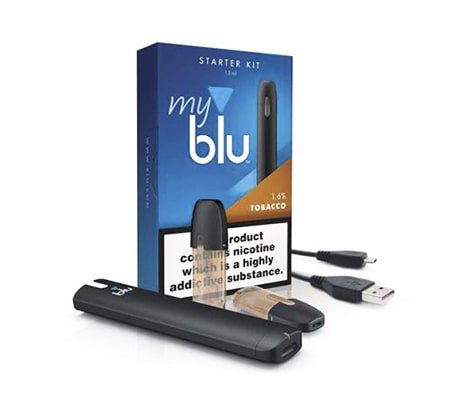 As we move away from smoking tobacco, vape devices have come along to fill the gap in the market. So-called ‘Pod Mods’ are designed to be quick and easy to use on the go. They typically consist of a closed ‘pod’ which contains an e-liquid, or else you can get refillable pods. There is a coil or atomizer inside the pod or occasionally attached to the battery. Basically, a pod is the tank, and the mod is the battery!

The humble pod mod has been improved over the years, and brands such as MyBlu attempt to lead the market. Today, I am going to look at MyBlu’s liquid pods and see if they are as good as advertised.

By the standards of the vaping industry, MyBlu is an old hand, having been formed back in 2009. Despite the glossy website, there is little information about the brand. However, I can tell you that after three years as an independent firm, Blu was purchased by Lorillard in 2012. After that organization was acquired by RJ Reynolds in 2015, Blu was sold to Fontem Ventures, a subsidiary of Imperial Tobacco.

Yes, Big Tobacco is now a major player in the vaping industry. Let’s face it; these brands always go where the money is! In any case, the brand claims to be the UK’s best-seller of e-cigarettes and vaping kits, so let’s see if the hype is warranted. 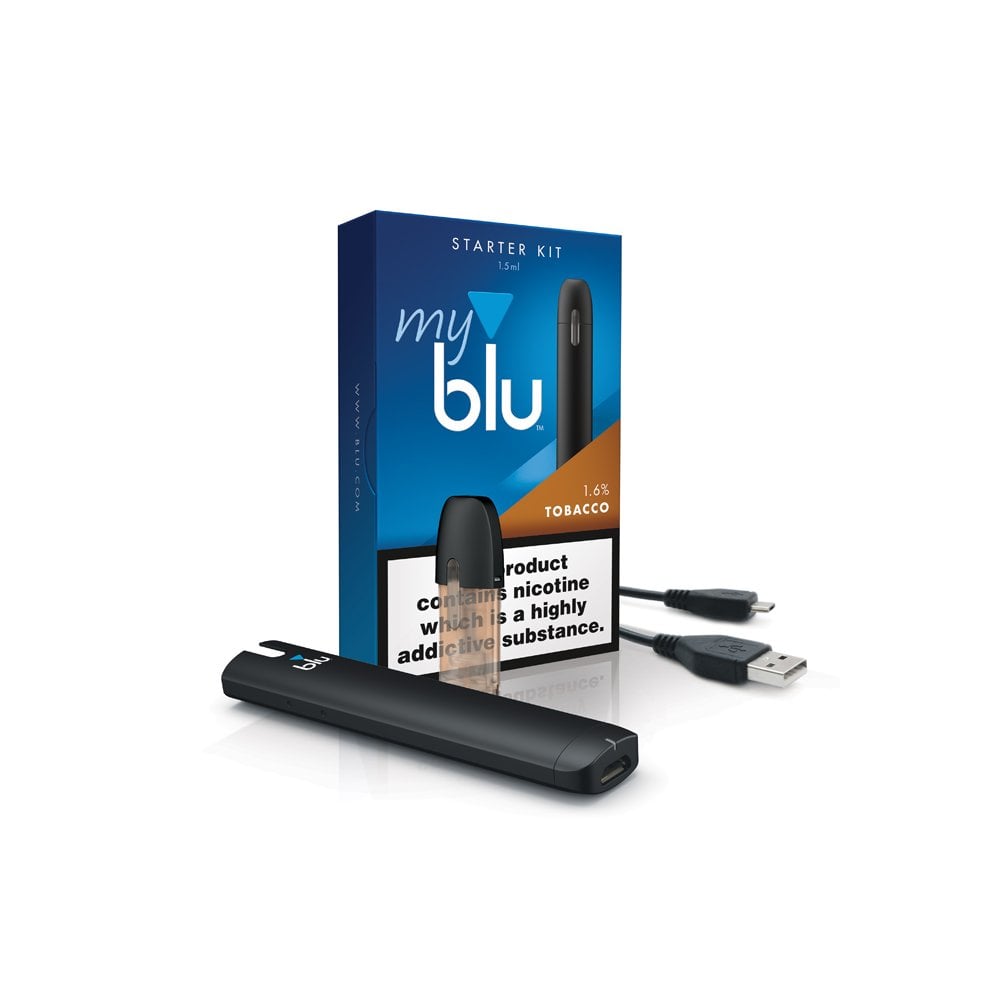 This is an entry-level kit that costs just £9.99 and includes a vape pen, a tobacco-flavored liquid pod with 1.5ml of liquid, and a USB charger. The battery has a 350mAh capacity with a 3.9V output. It takes just 20 minutes to charge, and the device can last you an entire day on a full charge. The vape pen is a small device that allows for a clandestine session and weighs just 22 grams so you won’t even feel it in your pocket.

For the low price, the MyBlu vape pen is well made. The pods snap into place easily, and you hear a ‘click’ noise when the parts have been assembled properly. There is a cavity at the top of the pen which is where you slip in the pre-filled pod. To use, just inhale through the mouthpiece, and the atomizer instantly activates the device.

There is a blue LED light at the bottom of the device that switches on when you take a draw, and it goes orange when your battery needs a charge (when the battery level is below 20%). To do so, simply attach the USB cable to the bottom.

In terms of performance, it has a reasonably tight draw which is ideal for anyone making the switch from cigarettes. I have heard stories of leaking MyBlu pens, but mine worked okay. However, the tobacco flavored pod is truly awful, unless of course, you’re a former chain smoker!

Fortunately, there are other flavors, and it is easy to switch things up. The 1-click liquid pod system means you can remove one pod and insert another in a matter of seconds. There is a total of 16 flavors, including Cherry Crush, Café Latte, Strawberry Mint, Blue Ice, and Coconut Breeze.

Each 2-pack pod costs £5.99, and there are three strength options. You can choose 0% nicotine, 0.8% nicotine or 1.6% nicotine. The United States version has 1.2% and 2.4% strengths, by the way. I also tried the Cherry Crush flavor, which was slightly better than the tobacco, albeit with a potent chemical taste.

Overall, the product is durable but also inexpensive enough to replace easily as and when it dies. It doesn’t need much maintenance, and while the vapor clouds were far from epic, it is hard to expect too much for such a low price. Bear in mind that a 20-pack of cigarettes is over £12 in the UK, and it is clear that the MyBlu starter kit is value for money. 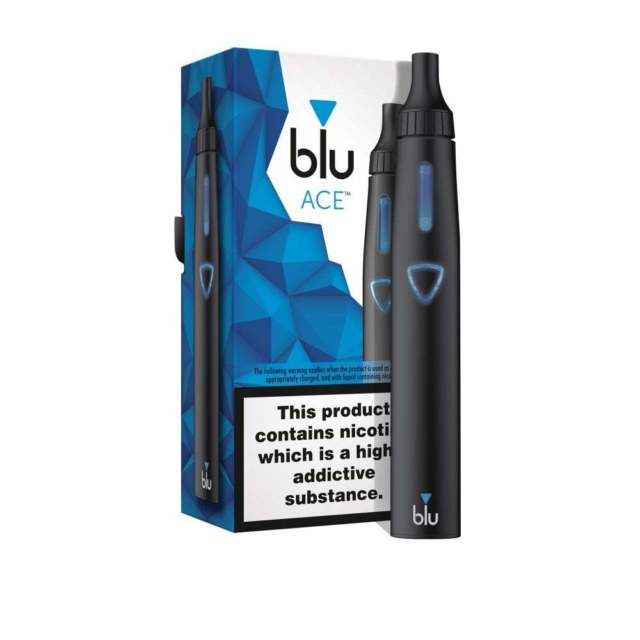 If you want something a little more substantial, you could try the Blu Ace device which costs £24.99. Along with the vaporizer, you get 2 x atomizer heads (0.6 ohms) and a micro-USB cable. The packaging makes it look like an oversized cigarette box, complete with the warning about nicotine.

The device has a special leak resistant spiral mouthpiece and allows you to vape while it charges. Unlike the pre-filled pods of the starter vape pen, the Blu Ace has a large refillable tank, and you can put one of 13 e-liquid flavors in it. The vaporizer has a sleek, minimalist device and looks a little like an ear thermometer if I am honest!

There are sharp edges on the side of the package, so be careful. The idea is that you press down on them while pulling the box out simultaneously. To fill the tank, simply unscrew the top and add your e-liquid until it reaches the clearly displayed max line. Screw the top back on and get ready to vape.

The battery charges fully from 0% in about 90 minutes; you should get up to 300 recharges, and a single charge should last for a couple of days. The device is partially charged when you receive it, but it is best to charge it fully before use. Fill the reservoir and start vaping! Unlock the device by pressing the single button on the front five times in a row. The light will flash five times to let you know it is ready for use. The light turns red when the battery needs charging.

Press and hold the button to start vaping. There isn’t much difference between this and the AIO vape in terms of performance. The flavors are okay (I enjoyed the Peach Passion option), as is the level of cloud production, and you have the option of adjustable airflow. Overall, the Blu Ace isn’t the best in class, but it is a good entry level vaporizer that won’t damage your bank balance too badly. 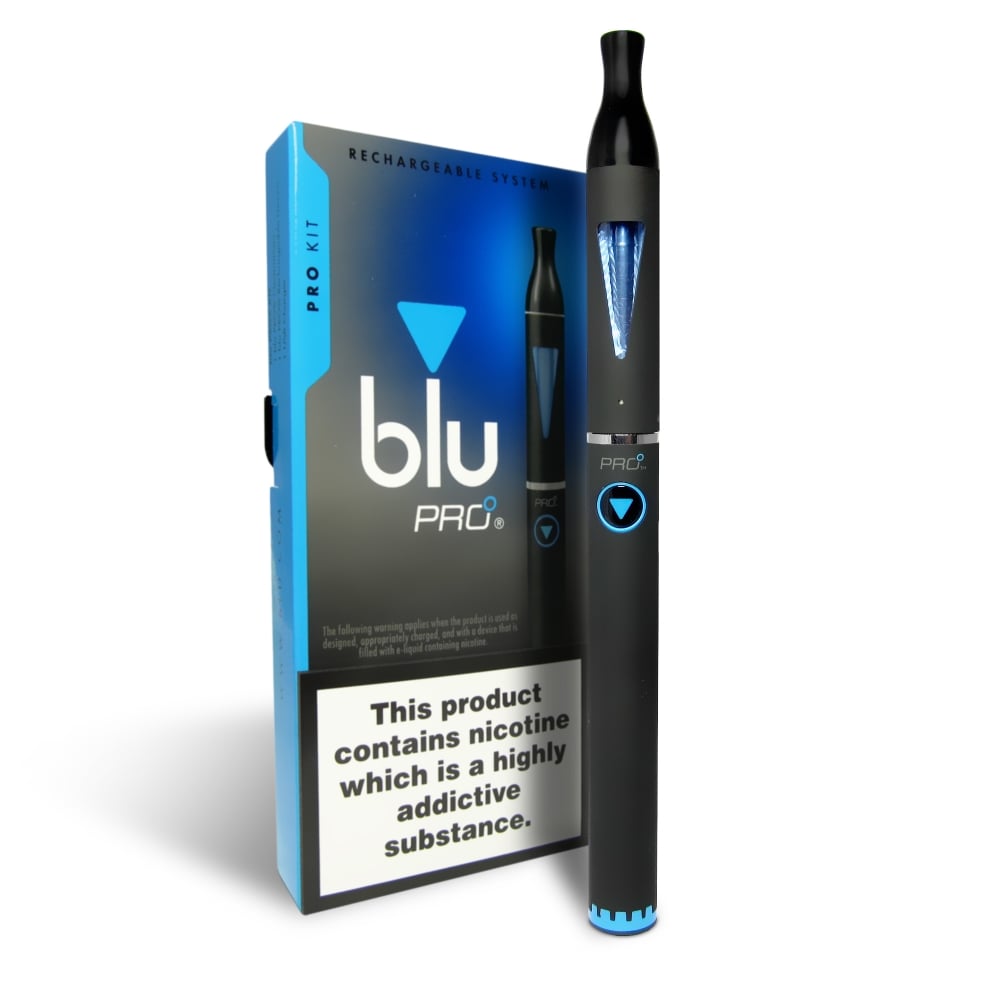 According to Blu, the PRO is an ‘advanced Blu vaping experience,’ and it costs £17.99. The brand recently upgraded this device, so it now has a longer lasting battery with a smoother taste. It is certainly a device geared towards more experienced vapers, which means it should be held to a higher standard.

The first thing you notice is the stylish, sleek design which features a lovely black matte finish. The kit consists of a clearomizer, a rechargeable device, and a USB charger. There are blue-tinted windows on each side of the clearomizer to check the liquid level, and you will see five LED lights on the rechargeable device. The triangle icon button flashes blue when it is in use and turns red when a charge is required.

Although it is supposed to be for seasoned vapers, it is easy enough to use if you’re a total novice. The two main parts attach together easily, and you only need to use a single button to activate it. The level of cloud production is distinctly average, but that’s when you compare the PRO to devices that cost triple the price or more.

When you detach the rechargeable device from the clearomizer, you can connect it to the charging cable while refilling the clearomizer. After you have filled the clearomizer, screw the mouthpiece on and start using. There are 13 flavors to choose from, and each bottle costs £3.99. The liquids come in the usual three strengths: 0%, 0.8%, and 1.6%.

The 1100 mAh battery is large for a vape pen of this size, but it takes up to three hours to charge it fully. On the plus side, you can get up to 300 puffs when you have a full clearomizer of liquid, and the battery should last you for the full day which makes it an excellent ‘on the go’ option.

Where Can I Purchase Blu Products?

Go to the official Blu website and click on the shop page. Alternatively, go to the Store Locator page and see if there is a shop that sells Blu products near you. Blu offers free shipping via Royal Mail first class delivery to all customers. At present, its UK base only delivers to customers in England, Wales, and Scotland.

Please note that the warranty varies depending on the product and only applies to items purchased from the official website or via a certified retailer.

Overall, Blu sells affordable vaporizers to suit the needs of novice and experienced vapers alike. You can choose the zero-nicotine option if you want to vape for flavor, or wean yourself off tobacco cigarettes by gradually reducing the nicotine strength you buy. While Blu products aren’t the best around in terms of vapor clouds or even flavor, they are solid purchases for an affordable price.

All three of its devices are easy to use, charge reasonably quickly, and last a fair length of time per charge. In essence, Blu products are a good option if you are not yet sure about whether you will like vaping, but don’t want to spend too much money to find out.

Diving into the facts...