The Best Dab Nail: Should You Choose Ceramic, Quartz, Titanium

The act of dabbing marijuana concentrates might seem a pretty intimidating process to the cannabis novice; one glance at all the various “tools” that are necessary (i.e. the metal wand, dab rig, nail, torch, etc), and it can actually appear that an entirely “different” kind of drug use is taking place.

In reality, though, dabbing is becoming increasingly popular, and with both marijuana products and their various forms of paraphernalia becoming increasingly accessible to people all over the country, it’s an activity worth looking into if you’re serious about your weed consumption. (And in fact, some say dabbing is more efficient and even healthier than smoking — and it DEFINITELY produces a more potent high).

Even still, though, as soon as you do some online browsing or hop into a dispensary to check out your dab rig options, the insanely wide range of products that are available can be a little bit overwhelming, to say the least.

In this article, we’ve tried to break down as simply as possible how to choose the best dab nail – we’ll be talking strictly about the differences between titanium, ceramic, and quartz dab nails, and which one of the dab nail types might be best for you, whether you’re a cannabis concentrate connoisseur or a first time dabber. (Also, on a bit of a side note, dab rig e-nails have also hit the market relatively recently, but we’ll go over them in a later article).

In a broad sense, there are basically two main categories that a dab nail can fall into: domed or domeless.

Domed dabbing nails are exactly what they sound like they are – nails that have a dome over them. These are two-piece units, with the slim, narrow nail sliding inside the stem of the actual dab rig, and then the dome sitting over top of the nail.

Basically, the dome serves two purposes: it adds an element of safety by minimizing the chances you (or someone else) touches the red-hot nail, and it also allows you to capture the smoke so that none of it gets wasted, which is nice if you’re sharing dabs with friends. (Although it’s worth pointing out that the whole point of dabbing is to inhale an entire dab in one hit).

Domeless nails, on the other hand, are broader, wider, single-piece units that fit over the top of the rig’s stem instead of inside of it. Avid dabbers pretty much strictly use domeless nails, as they are much more convenient and efficient given that you have better access to the nail itself when maneuvering around with the wand. The main drawback of domeless nails, however, is that they are completely exposed, meaning the risk of someone accidentally touching the red hot nail is greatly increased.

If you are new to dabbing, it’s generally recommended that you start out with a dome nail – they are much safer, and for starters at least, are easier to handle given that you can pace yourself and only inhale as much of a dab as you want at any one time. Once you’ve mastered the domed nail, you’ll then likely want to make the step up to a domeless variety.

Glass, Quartz, Ceramic, and Titanium: How to Choose the Best Dab Nail

Once you’ve decided on a domed vs domeless dab nail, you’ll then have to make the ever-so-difficult decision of what material you want it in. While temperature-controllable electronic nails (aka e-nails) have hit the market somewhat recently, they are super expensive and kind of overkill for the vast majority of dabbers. As such, most nails currently in use come in one of three (or four, if you include glass) materials: quartz, ceramic, and titanium. 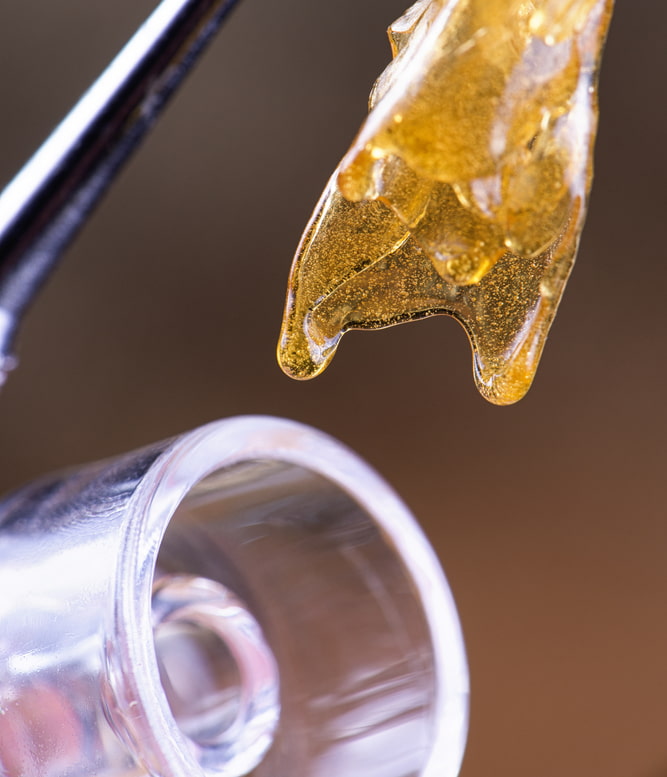 When you buy a low-end dab rig, most of them come with a domed glass nail. While these are perfectly functional, so to speak, they are not considered a real option for any serious dabber, as they are frail, brittle units that don’t hold or distribute heat very well. With few exceptions, the best dab rig will have a nail of either quartz, ceramic, or titanium.

We’ll start off with titanium dab nails since, generally speaking, they are probably the most common – and widely used – varieties of the dabbing world. Titanium is a seemingly perfect material for the process of dabbing because it heats super efficiently and relatively quickly, and it holds its heat extremely well; exactly what you want when executing high-temp dabs with your precious cannabis “gold.” 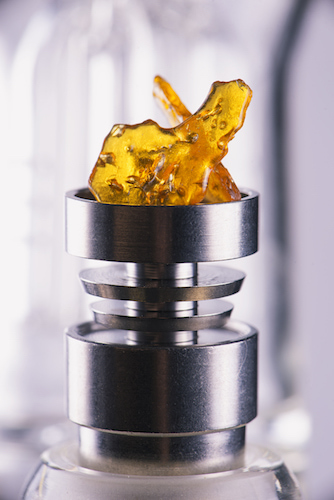 Moreover, titanium nails are very versatile in terms of what kinds of dab rigs they’ll fit; if a dab rig has ever been fabricated by a master glass-blower, then you can bet there’s a titanium nail out there somewhere that’ll fit it.

Also, titanium dab nails can come with or without carbs for increased ease-of-inhalation, and also, some “drop-down” models are designed to prevent your rig’s stem from receiving excess heat from the torch – a nice feature for expensive rigs that you don’t want to accidentally damage.

In terms of pure functionality, though, titanium dab nails are the most popular option because they are nearly indestructible, and they are super easy to use (and clean); simply heat them until they’re red hot, wait about 20 seconds, and then proceed with your dab.

Some avid dabbers with great taste will say that they get a subtle “metal” flavor when using ti nails, though, so keep this in mind if you’re super picky or sensitive to overall taste.

Also, it’s very important if you do decide to get a titanium dab nail, to make sure it’s of high-quality grade 1 or grade 2 titanium, and not some other knock-off metal material, because the last thing you want is to be inhaling trace amounts of heavy metals every time you hit a dab. Basically, you get what you pay for in terms of the best titanium dab nails – if you see an “awesome quality” one that’s half the price of other ti nails on the market, then odds are it’s not made of pure titanium.

Ceramic dab nails are kind of a niche item; they’re very nice to use and produce an incredibly clean hit and smooth flavor, but they can be a bit tricky to use for the novice, for a couple of different reasons.

For one, they can be tough to know how long to heat. Since they don’t glow red-hot like titanium nails, you’ll kind of have to judge when the temperature is at its peak – and when you’re super duper high, this can be more difficult to do than you might suspect. Also, if overheated (or dropped on a hard floor), ceramic is prone to cracking and shattering, unlike titanium. That being said, ceramic holds its heat for an incredibly long period of time. 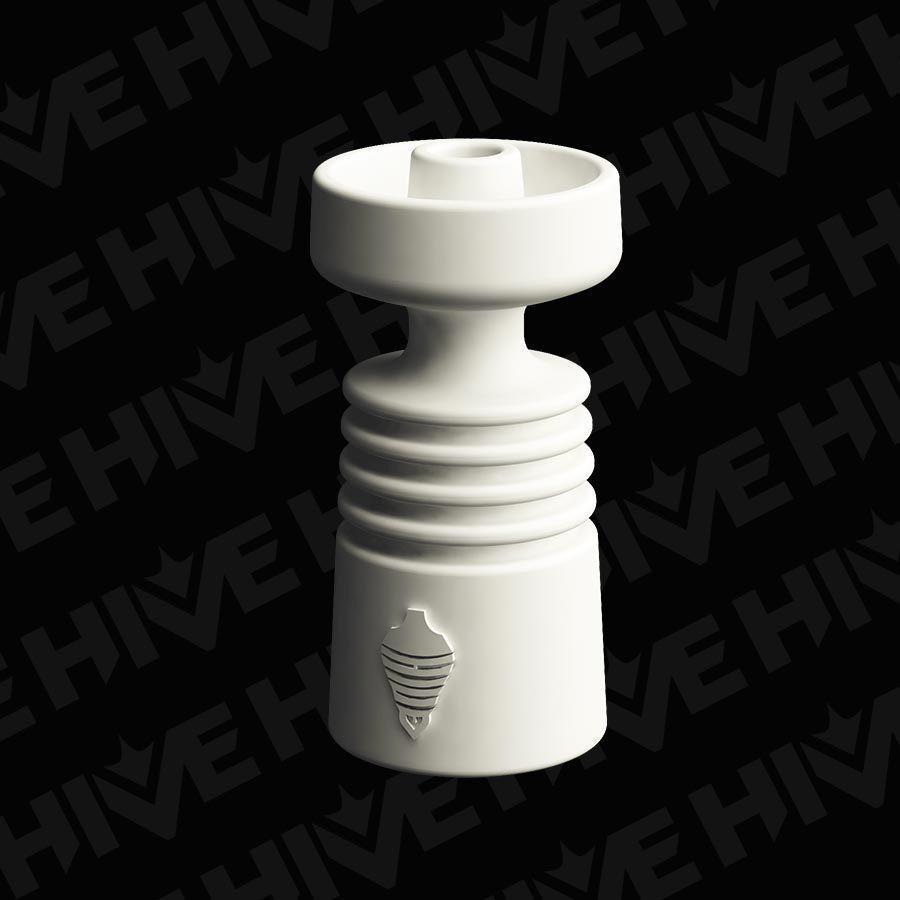 A lot of “dabbing connoisseurs” love ceramic because of the incredibly smooth and clean flavor that it provides. Overall an excellent option for avid dabbers, but not necessarily recommended for novices.

Quartz dabbing nails are another favorite of serious dabbers because of the ultra-smooth flavor that they provide. While they appear very similar to cheap glass nails, you can generally identify authentic live quartz if it has an engraving of some sort in it.

Also, quartz is highly preferable for a lot of dabbers because of cost – compared to most ceramic or titanium nails, they are much more affordable. This is great because, whether you realize it or not, you’ll probably, break, lose, or otherwise wear-out a dab nail at some point or another.

Also, a lot of quartz nails are made as what’s called “bucket nails,” because of their obvious appearance as a small bucket. These are super simple to heat and use, as you can simply dab the concentrate into the bucket and “stir” it around so that it sublimates evenly.

If you’re making your first upgrade from a cheap glass nail and aren’t quite ready to drop the cash on titanium (or if you want to keep using a dome nail), quartz is probably your best option.

However, they don’t hold heat nearly as long as ceramic or ti, so this may be an issue if you plan on hitting several dabs in one sitting (i.e. so that you don’t have to keep re-heating).

Other Things to Consider When Choosing the Best Dab Nail

No matter whether you decide to go with a quartz, ceramic, or titanium dab nail, you’ll want to break in – or season – the nail before you get to using it straight away. The seasoning process allows for any foreign materials or excess residues to burn off that may have been left over from the manufacturing or packaging process.

How to season a dab nail is a pretty simple process – you simply heat the nail up to a moderate temperature (not full-heat), and then spread a small bit of your wax or concentrate evenly over the nail’s surface until it melts completely, letting it all burn away without inhaling. After the concentrate has completely sublimated (burned off), use a pair of cooking tongs to pick it up and drop it in water, and then repeat the process two or three more times to ensure that the nail is completely cleaned and ready for high-temp use. (Also, if you don’t want to waste any of your concentrate material on seasoning, you can use water instead).

Another important thing that you’ll want to keep in mind when choosing the best dab nail is the wide range of sizes and fittings that are out there.

While increasingly more nails are being made as “combo units” (meaning they can fit any size rig out there), there are still plenty that have specific sizes and male/female joints that you need to be paired up correctly. In terms of size, there are basically three main diameters of dab nails and dab rigs out there to choose from: 10 mm, 14 mm, and 18 mm.

The majority of rigs are 10 mm, but some larger and more expensive units will employ the 14 or 18 mm varieties. Whatever size rig you end up getting, make sure that your nail corresponds to the same size (i.e. if you get a 14 mm rig, make sure you get a corresponding 14 mm dab nail).

Also, male/female joints have to be considered as well. Most dab rigs will have a male stem, which requires a female nail for proper attachment. However this may be flip-flopped on some models, so make sure you pay attention to whether your rig has a male or a female stem.

Well, that’s about it! Hopefully this article on how to choose the best dab nail was helpful and informative, and of course, if you have any additional questions or concerns, feel free to drop us a message through our Facebook page!

What Is a Glass Bubbler, Also Known as a Bubbler Pipe?

Should you be using one?

These Are the Best Torches for Dabbing [2021 Update]

Our top torches to use at home or on the go