What Does Brexit Mean for Cannabis UK Legalization?

On 20 February 2016, the then Prime Minister of the United Kingdom, David Cameron, called for a European Union Referendum. The ensuing campaign between leave and remain voters was hard-fought. However, on 23 June 2016, a slight majority of voters favored leaving the EU.

There is much debate as to whether it is a decision that will harm or help the UK. It will likely take many years to determine if it was the ‘correct’ choice. What is certain is that Britain will look at various new angles to improve its economy. There are suggestions that the UK could legalize cannabis for this reason. Let’s find out if this is a possibility.

The UK has a complicated relationship with marijuana. The drug was prohibited in 1928 as an addition to the 1920 Dangerous Drugs Act. Nevertheless, its popularity increased significantly during the 1960s. In 1960, law enforcement arrested only 235 people for a marijuana-related offense. In 1969, however, police arrested almost 4,700 people for the same crime.

The increase in cannabis usage led to the 1971 Misuse of Drugs Act, which listed the herb as a Class B drug. Penalties for possession and sale increased markedly. By 1973, over 11,000 people were arrested annually for marijuana use or sale. Cannabis was briefly reclassified as a Class C drug in 2004 but was restored to Class B status in 2009.

Despite the illegal status of marijuana in the country, the UK is the world’s largest producer and exporter of medical marijuana in the entire world! In 2015, Britain produced 42 tonnes of legal cannabis. In 2016, that figure more than doubled to 95 tonnes, accounting for almost 45% of the world’s total. Additionally over two tonnes of that amount were exported in 2016, a figure which makes up 67.7% of the global market.

Brexit aside, there has been a public debate about whether the UK should legalize medical marijuana. The cases of Alfie Dingley and Billy Caldwell, two boys who have severe epilepsy, gained national and international attention in 2018. In Billy’s case, his mother, Charlotte, was returning home from Canada with cannabis oil for her son. To her horror, airport officials confiscated it.

Within days, Billy’s condition deteriorated to the point where his seizures threatened his life. Once Billy was rushed to the hospital, there was uproar. The boy’s mother appealed to the British Prime Minister at the time, Theresa May, to grant a special cannabis license so that her son could receive treatment.

Eventually, the Home Secretary, Sajid Javid, relented. He announced that cannabis oil would be made legally available to individuals with specific health problems, primarily epilepsy.

In December 2018, a handful of individuals received legal, medical marijuana. For Carly Barton, who has fibromyalgia and is in constant pain, cannabis is a potential game-changer. She was the first person in Britain to get medical cannabis (MMJ).

Cancard UK – The First Step Towards Legal Medical Marijuana in the UK?

The National Health Service (NHS) does not fund medical marijuana, so Carly had to pay £2,500 for a three-month supply. For Carly and thousands of others, the need for pain relief is so great that they are willing to break the law.

UK residents in this situation received a boost in November 2020 with the creation of Cancard. Carly Barton helped devise it with the assistance of senior police. It protects MMJ patients using self-sourced cannabis from arrest. Approximately 15,000 people had provisionally signed up by the day of Cancard’s release.

You are potentially eligible if you have a health condition that could warrant MMJ, but you can’t afford it. This is a massive step forward for the estimated 1.4 million Britons who use medical marijuana but don’t have a prescription.

Will Brexit Lead to Legalized Cannabis?

Many leave voters (and some remainers) believe that the EU controls its member states’ domestic drug policies. In reality, the Treaty of Functioning, Article 168, states that the EU will complement member states’ actions when reducing damage related to drugs, including prevention and information.

The EU’s authority only extends to serious drug crimes such as trafficking. Also, the EU has zero jurisdiction over the drug policies of the UK, Germany, Italy, France, or any of its current member states.

Those who claim the EU does, in fact, control domestic drug policies often erroneously point to a case in the Netherlands. In this instance, a law ensured that non-Dutch nationals should not be allowed in the legendary coffee shops.

It was claimed that EU equality laws overturned the decision of the Dutch courts. However, it was the Dutch government who overturned the law within a few months. It was unpopular, and several municipalities hadn’t bothered to implement it.

The Misuse of Drugs Act regulates all cannabis-related offenses in the UK. You receive an informal verbal warning if found in possession of fewer than five grams of weed. A second offense of this nature comes with a fine of £80. A third offense leads to an arrest and a caution. A fourth offense means a day in court with the possibility of a conviction remaining on your criminal record.

Some parts of the UK are far stricter than others. For example, the police in Durham have given up on any pursuit of minor marijuana offenders. Instead, they focus their dwindling resources elsewhere.

Marijuana laws and punishments are different throughout the EU. Brexit will NOT change Britain’s marijuana laws in itself. The UK Government will retain control of drug laws in the nation as it has always done. As such, it is highly unlikely that recreational cannabis will become legal.

Neither of the major parties is pro-marijuana. A few years ago, Parliament rejected a petition signed by 235,000 people who wanted a parliamentary debate about the legalization, or at least the decriminalization, of weed.

Current Prime Minister, Boris Johnson, admitted using cannabis in the past. However, since becoming his country’s leader, he stated that he wasn’t planning legalization or deregulation. Indeed, Johnson said: “I think drugs are really bad, I do.”

The delightfully named Crispin Blunt is a Conservative MP and chairs a cannabis lobbying firm. If he were to push Johnson on the issue, the UK might see some progress. In December 2020, Blunt said that the Prime Minister was willing to review Britain’s current cannabis policy.

Those who oppose Brexit claim that Britain is headed towards a crisis in the short to medium-term. Even those who are anti-Europe and keen to leave acknowledge that the positive effects could take up to 50 years. In the meantime, several important multinational corporations have moved much of their businesses overseas. These include Aviva, Barclays, Dyson, Ford, Honda, and Toyota.

Tax hikes look extremely likely as Britain, like most of Europe, was badly damaged by the global pandemic. Estimates vary, but the UK may need to plug a £2 trillion hole in public finances. Public debt in Britain exceeds 100% of its GDP.

Add in the business the country has lost recently, and it seems as if it is in big trouble. Therefore, a desperate UK Government may act by legalizing cannabis.

According to a 2018 report by Health Poverty Action, introducing legal cannabis to the UK could add anywhere between £1 billion and £3.5 billion to the nation’s treasury. The police and judicial areas will benefit from reduced costs. Meanwhile, the NHS, which is in dire need of extra cash, will also profit from legalization.

Opening Colorado-style licensed marijuana stores would also create jobs. If Brexit has the short-term impact many experts believe, this new form of employment will come in handy.

So, Will Brexit Result in Changed Marijuana Laws?

The act of leaving the European Union will do nothing to change the legal status of marijuana in the UK. The EU doesn’t have control over the possession or sale of cannabis on a national level. Therefore, the UK Government is free to create and enforce whatever marijuana laws it chooses. 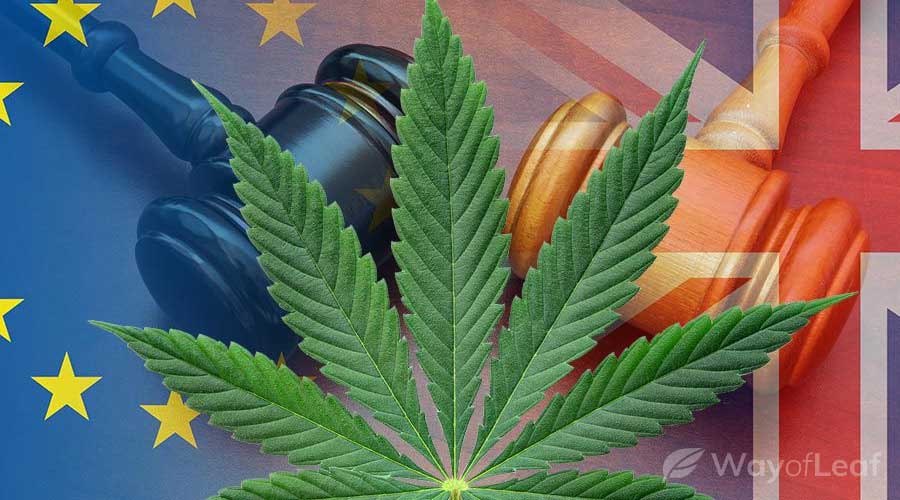 However, Brexit could hasten the legalization of cannabis if its impact is as disastrous as many people predict. The unforeseen global pandemic has also hit the UK hard. If it loses tens of thousands of jobs and billions of pounds in EU subsidies, how will it make up for the shortfall?

Its government could easily look at the changing public opinion surrounding cannabis and decide to legalize it. The result would be an economic boost that may help it thrive in a post-Brexit world.