The fight to legalize marijuana continues, with proponents claiming the plant isn’t nearly as addictive as suggested. They also point out the growing number of studies that outline the possible benefits of marijuana. Discussions surrounding hemp and marijuana tend to revolve around the cannabinoids THC and CBD.

However, each version of the Cannabis Sativa L. plant contains well over 100 other cannabinoids. Further investigation into a few of them has revealed some fascinating effects, not to mention potential benefits. In recent times, THCs such as delta-8 and delta-10 have become popular alternatives to the delta-9-THC found in marijuana.

Much of the appeal boils down to the legal gray area with such cannabinoids, permitting retailers to take a chance by selling them. Hexahydrocannabinol is another compound that falls into this murky territory. Indeed, it is arguably more confusing because hemp-derived HHC isn’t THC even though it causes intoxicating effects. However, HHC can come from THC too!

Read on to learn more about the effects, benefits, legality, and risks associated with HHC.

Roger Adams, the chemist who identified and isolated CBD in the 1940s, created hexahydrocannabinol in the same decade. HHC is a hydrogenated derivative of tetrahydrocannabinol (THC). Adams added hydrogen molecules to delta-9-THC in a process called hydrogenation, which converts THC into HHC. For the record, turning vegetable oil into margarine involves a similar process.

Despite being created over 70 years ago, there is minimal research into HHC and its effects. However, we know that using hydrogen atoms to saturate the molecule increases its shelf-life significantly. There are 10+ versions of HHC, including HU211, 7-OH-HHC, and HU243, to go along with the original hexahydrocannabinol. 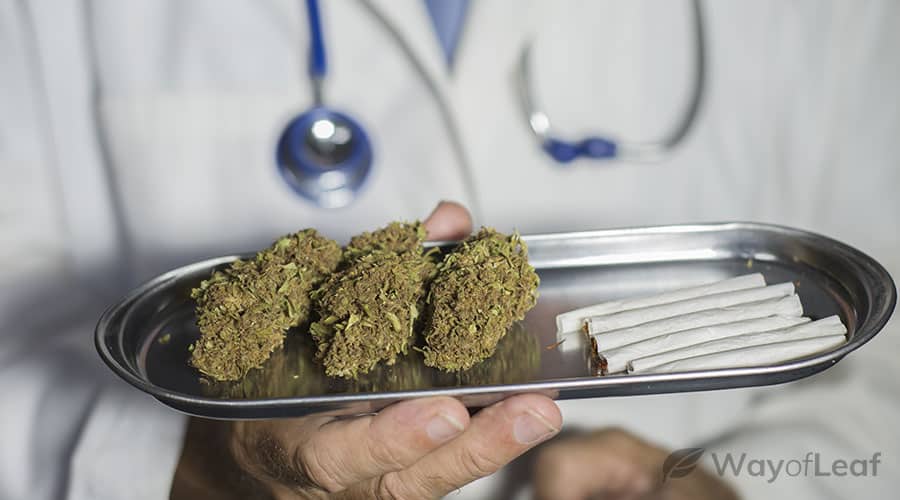 Unlike THC, HHC has no double bonds. Instead, it has two extra hydrogen atoms. It is the direct opposite of CBN, which is created when THC gains further double bonds as it breaks down. With HHC, the double bonds in THC are broken and replaced with hydrogen, which changes the molecule’s binding affinity for the CB1 and CB2 receptors in the body.

When you purchase HHC, you’ll find that it retains a high percentage of its potency for a lot longer than delta-9-THC. It is significantly more resistant to breakdown when exposed to UV light and heat.

How Is HHC Made?

Although Adams created hexahydrocannabinol from THC, brands that create HHC products use hemp. This is mainly for legal reasons, which we outline in the next section.

The process of making HHC begins with cannabidiol extracted from raw hemp. The CBD is distilled and isolated. The end product has a powdery texture and is often sold as separate CBD isolate products. From there, a lot depends on the manufacturer. Bearly Legal, for example, says its HHC manufacturing procedure is a ‘proprietary process’ without giving away a great deal.

Legality aside, one can also create HHC from THC in a laboratory. Hydrogenating THC involves exposing concentrated THC to hydrogen, high pressure, and a metal catalyst like palladium, platinum, or nickel. The catalyst is removed from the mixture once it has completed its task.

A study from 2007 outlined the possibility of converting CBD into different forms of HHC using gastric juice. However, there is practically no further information on this method of making HHC. Finally, there’s also a suggestion that it’s possible to create HHC from a terpene called citronellol.

How companies create HHC also leaves the issue of legality open to debate.

According to creators of HHC cannabinoid products such as Bearly Legal, the compound is federally legal because it occurs naturally in the hemp plant. It chose hemp and CBD to create HHC quite deliberately.

Industrial hemp is now legal to grow in the United States, as long as the maximum delta-9-THC content is 0.3%. While hemp is best known for producing large amounts of CBD, it does have many other cannabinoids. Technically, products containing other hemp cannabinoids remain legal if they don’t exceed the 0.3% THC threshold. Manufacturers of HHC products are adamant that everything is above board. 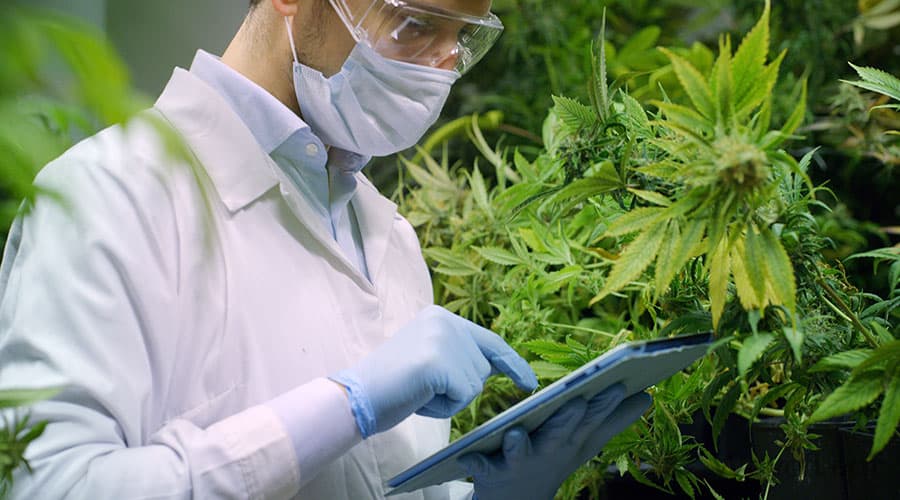 The reality is different, however. Although HHC is not the same as THC, it is potentially illegal if deemed synthetic. The FDA’s Interim Final Rule (IFR) states that synthetic cannabinoids in hemp are illegal, while naturally-occurring ones are permitted. It is true that HHC occurs naturally in hemp and cannabis but only in tiny amounts. HHC manufacturers make it in a lab via a chemical process designed to create more of it.

Then there is the small matter of the Federal Analog Act, which makes any analog of a Schedule I drug, such as delta-9-THC, a prohibited substance. Therefore, despite the claims of HHC sellers, you use products containing it at your own risk.

Is HHC Stronger Than Delta-9-THC?

It is difficult to ascertain the precise potency of HHC due to the lack of research into it. Indeed, even manufacturers of HHC products acknowledge a lack of consistency. The ratios of inactive to active HHC molecules can vary from one batch to another. While these companies do their best to increase the level of active compounds in a product, they don’t have full control.

According to its chemical structure, it seems likely that HHC is stronger than delta-8 but not as potent as delta-9. Estimates vary, but hexahydrocannabinol is probably up to 80% as intoxicating as D9.

As a rule, any THC form with four or more carbons in its side chain produces intoxicating effects. For instance, delta-8, delta-9, and delta-10 THC all possess five carbons, as does HHC. Incidentally, THCP, the most potent form of THC, has seven carbons.

A lack of scientific evidence means the apparent benefits and effects of the HHC cannabinoid are primarily anecdotal. Those who have used it say HHC effects are similar to THC, including euphoria, altered auditory and visual perception, and changes in cognition. In general, you can expect effects closer to delta-8-THC in terms of relaxation. However, other users claim they feel energetic with a sharper mind.

An old study from 1977 tested HHC on rats. The researchers found that the cannabinoid could share properties with narcotic painkillers, but significant differences existed.

The 2007 study mentioned earlier tested HU211 and HU243 on mice. It found that HHC prolonged sleeping time by between 80% and 700%. The researchers also wrote that the cannabinoid showed delta-9-THC like effects in the mice, with less potent pharmacological effects.

Meanwhile, a 2011 study looked into a pair of HHC analogs, LYR-7 and LYR-8. It found that the compounds could potentially inhibit tumor cell growth and angiogenesis, a major step in forming tumors.

A study published in 2010 found that HHC’s effects lasted a long time in rats. Overall, apart from the limited research outlined in this section, there is nothing else to link HHC with the benefits claimed by manufacturers. Certainly, there are no studies on humans that provide any insight.

Apart from suggestions that it has painkilling potential, HHC could have the following benefits:

If it is 80% as potent as delta-9-THC, individuals with a low THC tolerance should approach HHC with caution. Use no more than 3-5mg at first to gauge how it affects your body and mind.

No one knows for sure. HHC manufacturers suggest that it is perfectly safe since it comes from the hemp plant. Once again, though, the lack of research is a concern. While there are no existing reports on side effects, this doesn’t necessarily mean it is safe. HHC products are new to the marketplace, so there is little data on short to medium-term adverse effects, let alone long-term problems.

Given its similarities to THC, and the fact it is almost as intoxicating, the following side effects are possibilities based on what we know about delta-9:

The lack of regulation is also a problem. While a growing number of companies sell HHC products, only a handful are well-known. Also, most HHC items come in the form of vape cartridges. Given the link between vaping and possible lung illnesses, one must exercise caution when buying HHC products.

Stick to the few reputable companies that sell this cannabinoid, and always look for lab reports. We outline the brands worth considering a little later on.

Does HHC Show up on a Drug Test?

This is another unknown. Naturally, HHC manufacturers try to claim that it doesn’t show up on standard 5-panel and 10-panel drug tests. The suggestion is that HHC doesn’t metabolize into 11-hydroxy-THC metabolites like delta-8 or delta-10. It is this metabolite that drug tests can detect.

Having the opportunity to enjoy an intoxicating substance without being caught by a test is appealing.

If HHC is undetectable in a drug screening, it would surely become an incredibly popular product. Having the opportunity to enjoy an intoxicating substance without being caught by a test is appealing.

However, we must emphasize the fact that there’s no evidence one way or the other. If you consume HHC, you have no idea whether a drug screening will find it in your system.

Who Sells the Best HHC Products?

At present, there are few reputable HHC sellers or useful products. Bearly Legal has developed a reputation for selling high-quality niche cannabinoids such as delta-8, delta-10, THC-O, and HHC.

At present, its range is limited to HHC vape cartridges and gummies. The HHC carts contain up to 99% of the cannabinoid in 1ml of liquid. Its gummies contain up to 20mg of HHC apiece. If you’re a new user or have a low THC tolerance, we recommend consuming no more than half a gummy.

Other recognizable brands include Delta Extrax (previous Delta Effex) and Fuked Up.

However, Binoid is recognized by many as the most trustworthy seller of HHC. It sells high-quality products such as 1000mg of HHC tincture and vape cartridges containing 1 gram of the cannabinoid. Flavor options for the cartridges include:

Binoid recently slashed its prices, so if you’re interested in HHC, visit the site while the price remains low.

Final Thoughts on the HHC Cannabinoid

Ultimately, while an HHC product may seem new and exciting, bear in mind that claims as to its efficacy and safety aren’t yet backed by scientific research. It seems likely that HHC has THC-like effects, including intoxication. Users of this cannabinoid report feeling relaxed, calm, and happy after using it. There is even a possibility that it has analgesic effects.

Since it is slightly milder than delta-9-THC, it may prove useful for individuals who find cannabis slightly too strong.

However, the long-term effects of HHC remain known. There is also massive confusion regarding its legality at present. As it can come from industrial hemp, products with no more than 0.3% delta-9-THC could be legal throughout the United States. In reality, even though HHC occurs naturally in the hemp and marijuana plants, it is created in a lab, probably making it an illegal substance.

Overall, you can likely try it in a state that permits adult-use marijuana or in a location with a medical marijuana program if you have an MMJ card. Otherwise, there are potential legal issues associated with its use.

Why Is Marijuana Called 420? [The Moniker Explained]