The term ‘meme’ relates to a concept, catchphrase, activity, or piece of media that spreads for humorous purposes on the Internet. It usually appears in the form of a video, GIF, or image. If someone is captured saying or doing something especially dumb, they risk becoming a meme!

The actual term was first used by everyone’s favorite atheist, Richard Dawkins, in 1976. He wrote about memes in his book, The Selfish Gene as a means of trying to explain how cultural information spreads. However, Mike Godwin was the first to discuss the Internet meme in Wired magazine back in 1993. In 2013, Dawkins complained that Internet memes are simply methods of hijacking an original idea.

As the marijuana industry grows, so do the number of memes relating to the plant. This guide proves that memes don’t have to be complete irritants!

Is your birthday 4/20? If you love the herb, the best way to say ‘Happy Birthday’ is with weed. 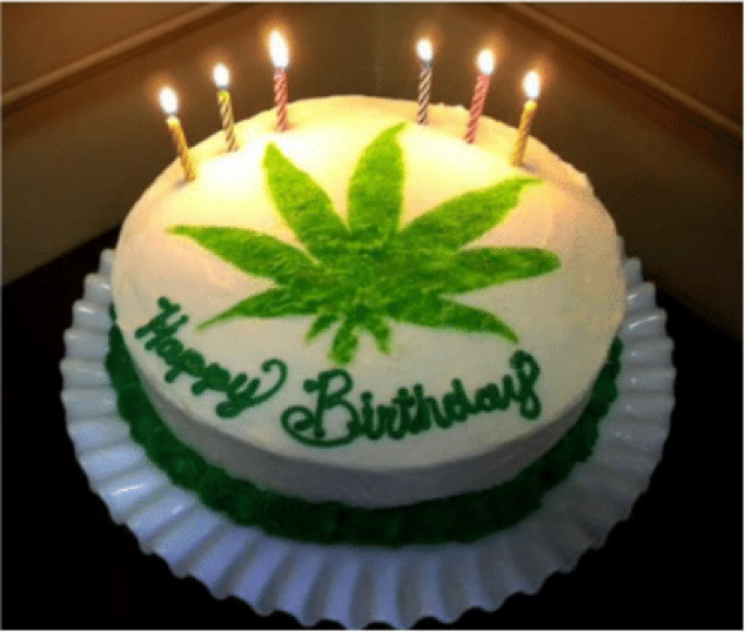 I think you’ll agree that this Happy Birthday weed meme is awesome and exasperating at the same time. I mean, it is fun to look at, but dammit, you WANT that cake!

After a happy birthday spent in the company of weed, you will likely get stoned and create your share of funny pictures involving marijuana. 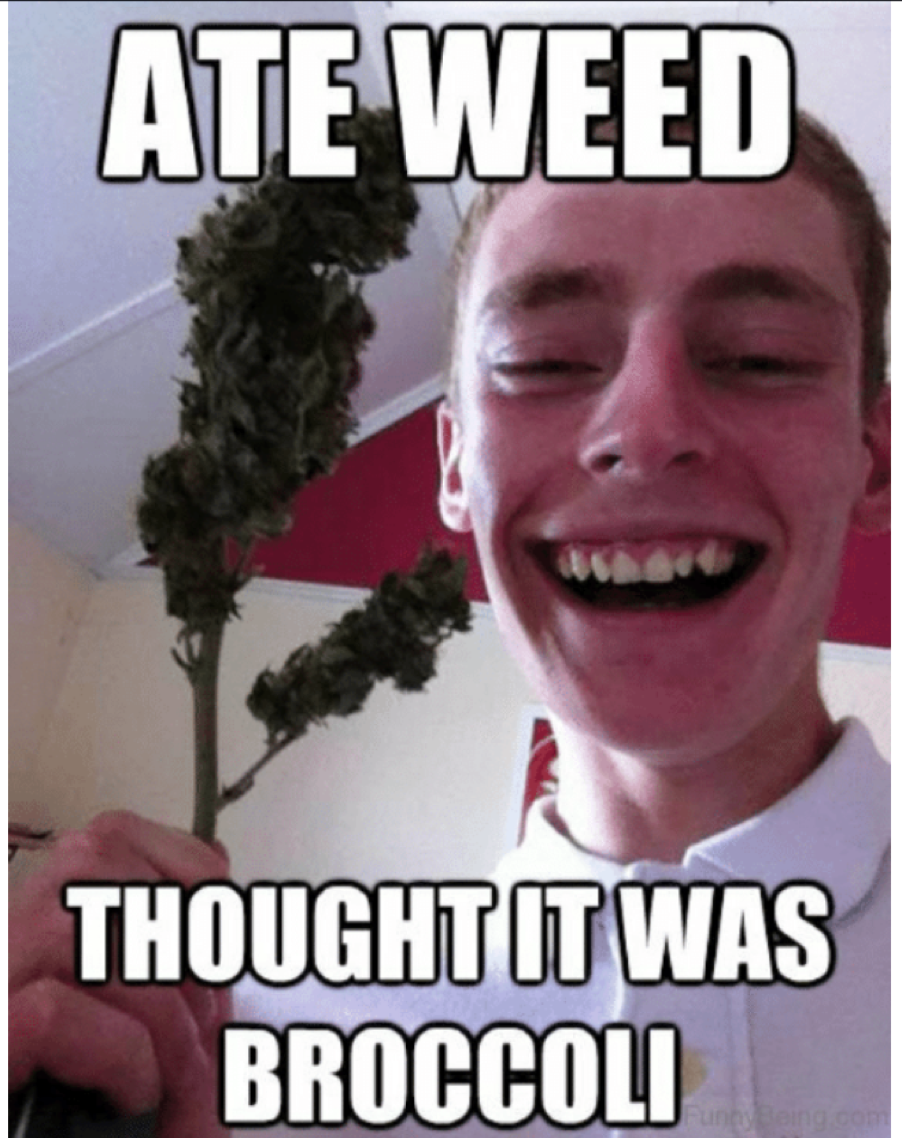 Why not have fun with friends who have no idea what weed looks like? If their tolerance is low, they will end up looking like the guy above. 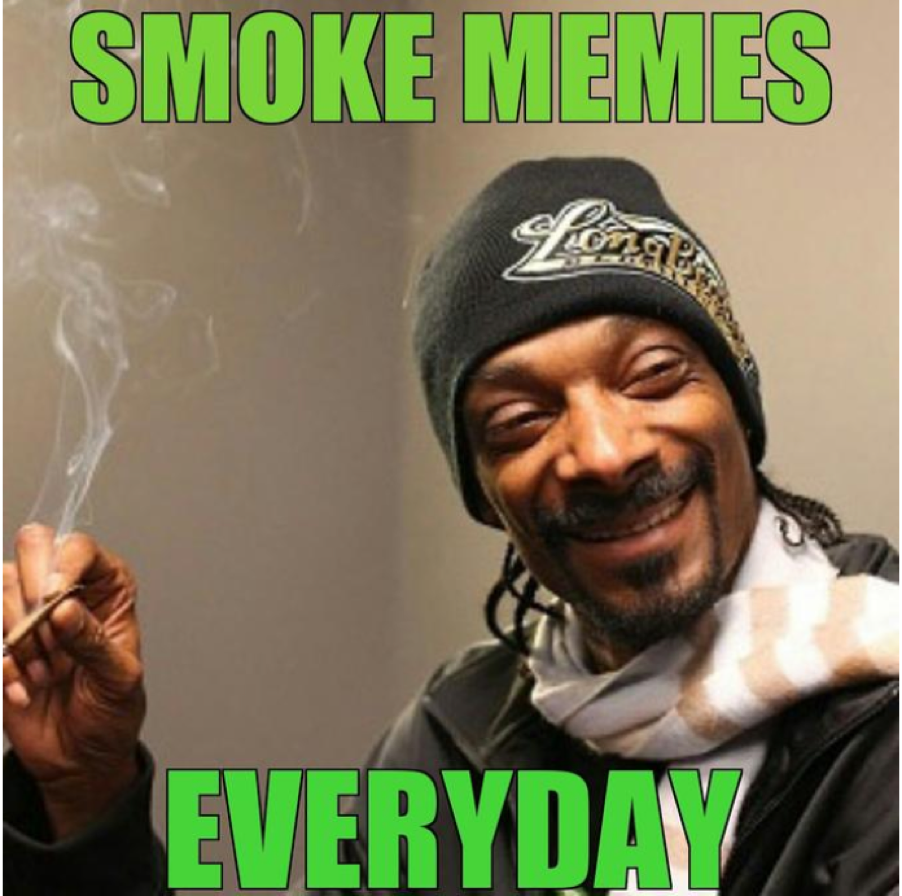 Of course, you won’t succumb to the effects of the herb because you’re an experienced user; just like the guy above, who should be the face of EVERY smoke weed meme in my opinion!

The vast majority of marijuana images you will find online are funny because, let’s face it, everything is funnier when we are stoned. I vividly remember laughing non-stop at the dumb things my friends and I would do or say when completely baked.

When I wasn’t pretending to be Superman and passing out after 10 consecutive bong hits, a friend was impersonating a famous 1980s pop singer, falsetto voice and all. I really wish we had a camera to capture these moments because there would have been enough funny marijuana pictures to fill a book! 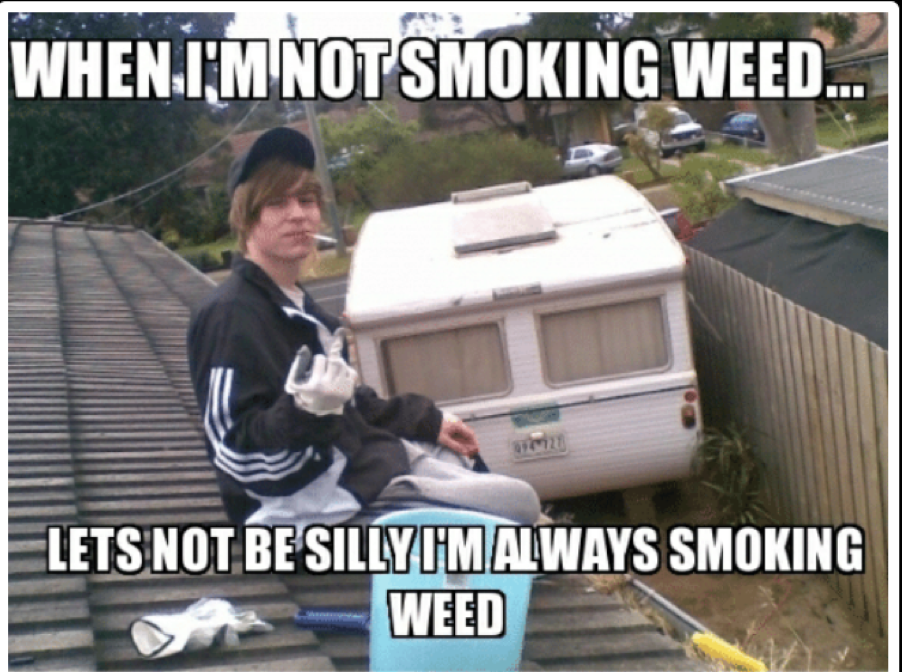 The above is one of the funniest marijuana memes to me, because it reminds me of one of my closest friends. He went through a stage (lasting several years) where he smoked so much weed that even Snoop Dogg would have said, “slow down, buddy.” It culminated in many Jackass-type stunts. If it were him on the roof in the image above, he would have attempted a somersault!

There is a curious lack of memes relating to marijuana and gang activity. Then I discovered an entire website dedicated to something called ‘gang weed memes’ which was nothing like I thought it would be. A significant proportion of these memes feature Batman’s nemesis, The Joker, primarily ones where the late Heath Ledger magnificently portrayed the villain. 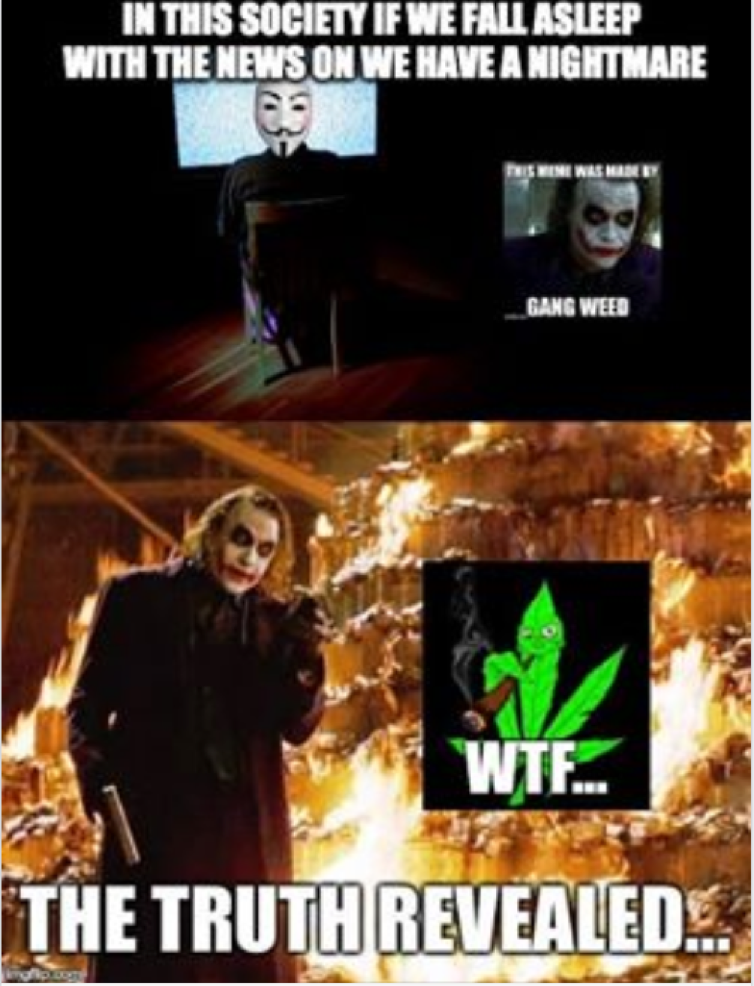 As you can see, these memes are pretty weird and, at best, a couple of them are tenuously related to marijuana. In actual fact, these gang weed memes tend to rail against the injustices in society, and point out the immense level of hypocrisy and inequality that exists in the world… I think. To be honest, the creators of these memes were probably higher than a jumbo jet when they dreamed them up. 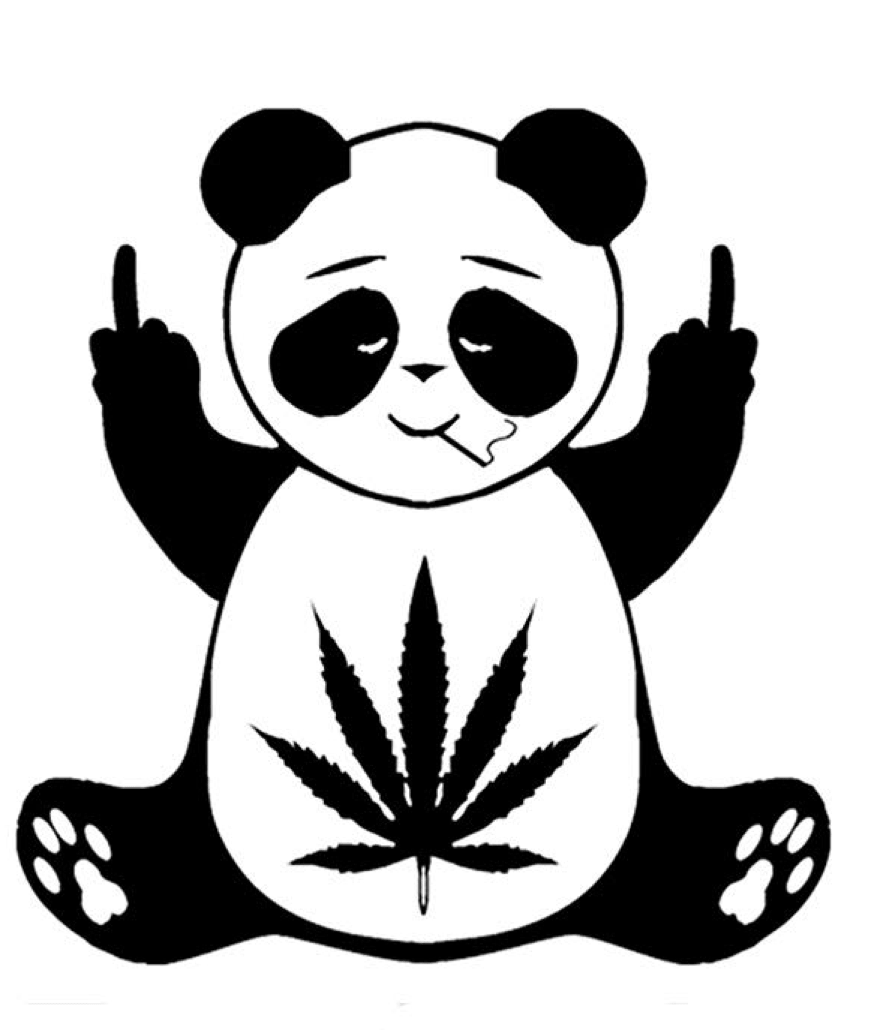 At least we can have some levity in the form of marijuana cartoons and pictures. This image of a stoned panda flashing two middle fingers is actually a wall sticker you can buy from Amazon. I would personally like to see those who work in a Dilbert-style cubicle to stick it on their wall as a reminder of what they will enjoy at home after completing yet another dull shift. 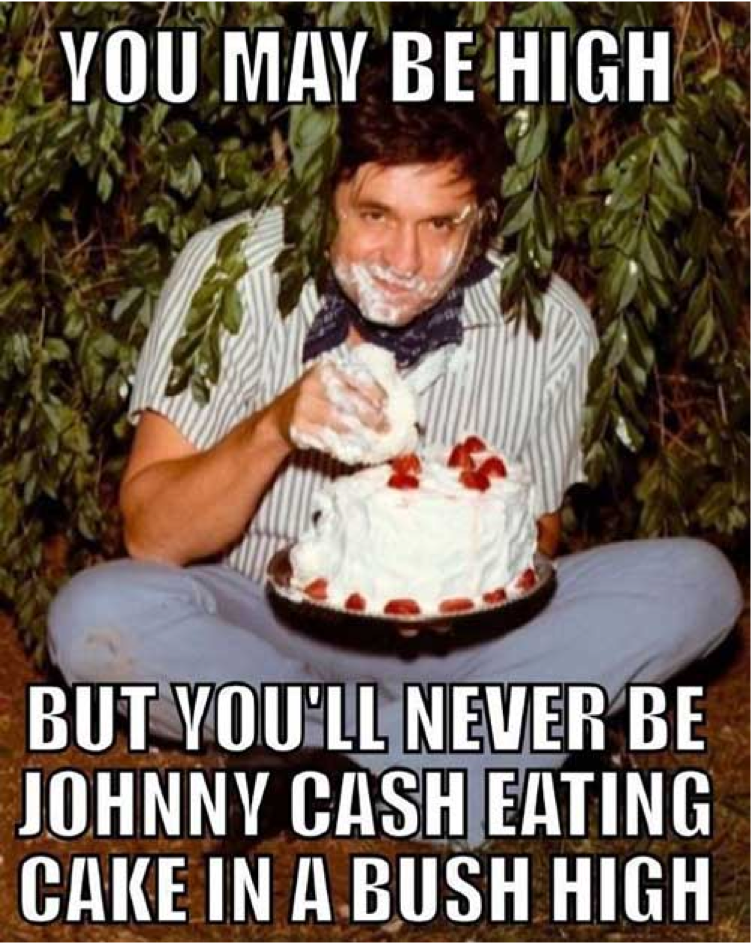 A good marijuana meme is simple, to the point, and should make you laugh like hell. The above is a funny marijuana pic that you will struggle to top. In reality, the Man in Black was probably on a lot more than weed in that picture; but haven’t we all done something remarkably stupid when high? 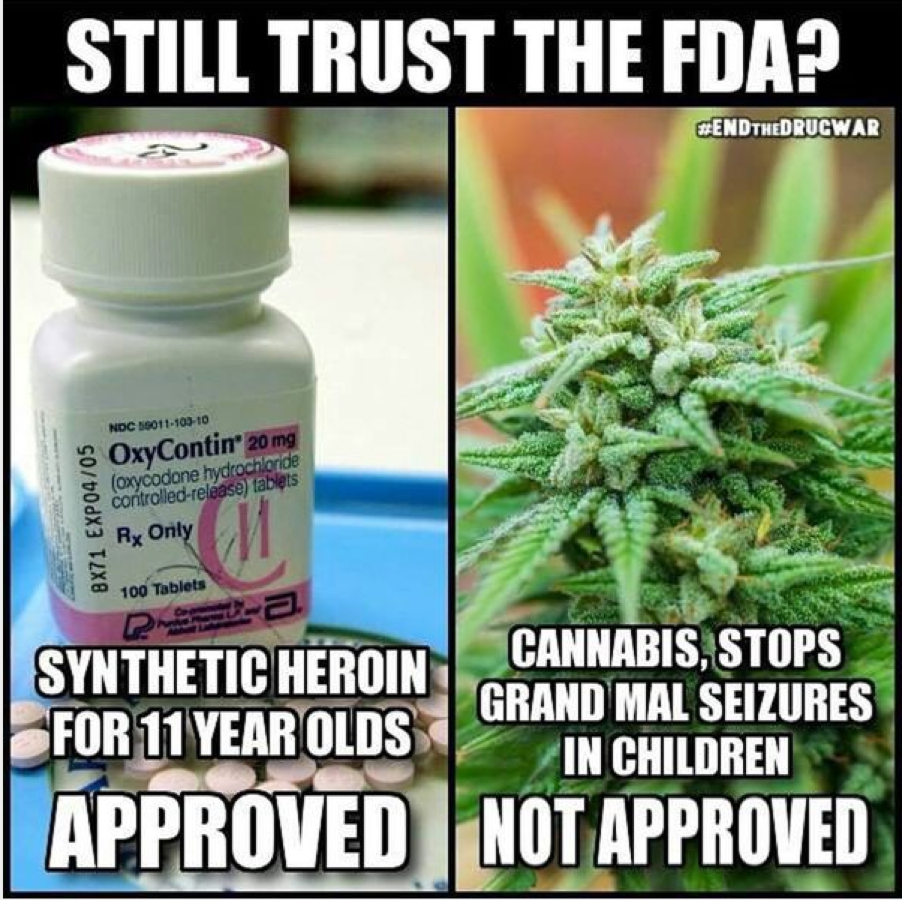 At the time of writing, medical cannabis was legal in 33 states and D.C. Also, Illinois recently became the 11th state in America to legalize recreational weed. Given the potential benefits of the herb, it is not surprising to see an array of medical marijuana memes.

They range from the funny to the maddening, and I think the meme above is a prime example of the latter. Imagine a world where our kids get synthesized heroin, but the Feds won’t allow access to a naturally occurring plant. 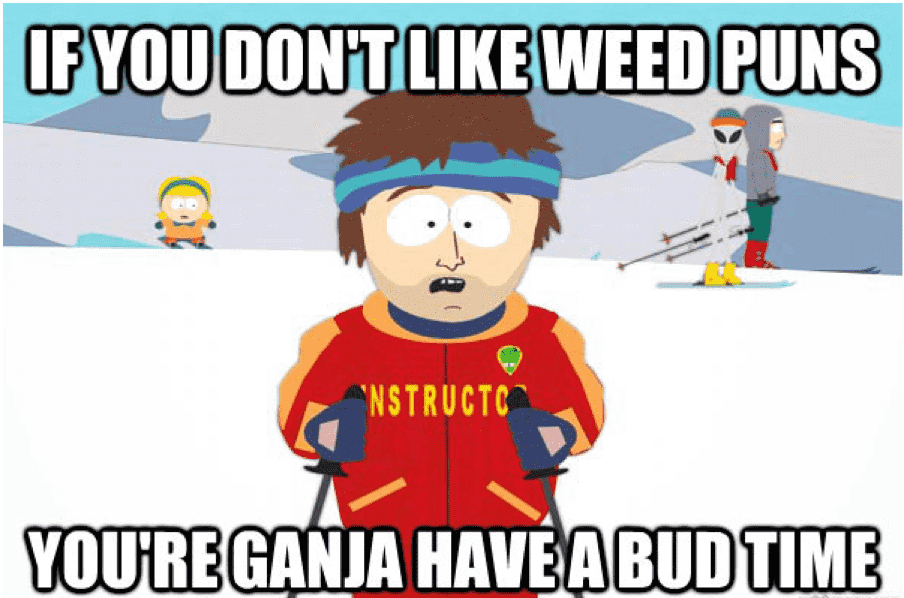 Let’s face it, any attempt at making marijuana puns when high will probably yield a stream of gibberish. Wait until you are sober to make a fool of yourself; as is the case in the above meme. 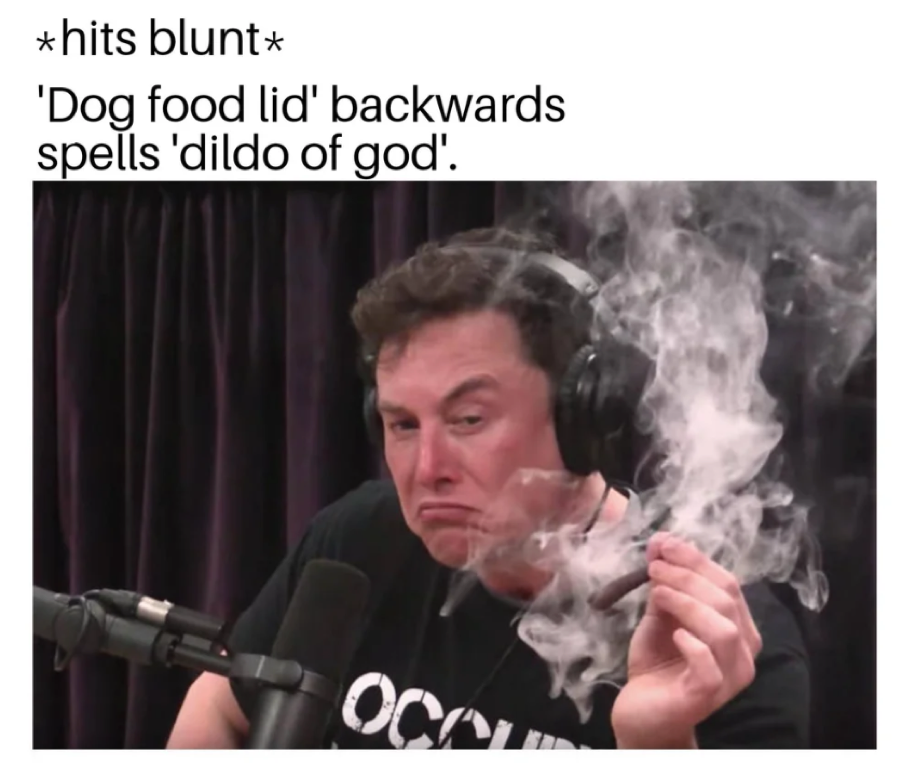 It is only right that there are dank weed memes available to celebrate high-quality herb. The meme above was created to commemorate Canada’s momentous decision to legalize cannabis fully. Now that cannabis is widely available, Canadians will find it very easy to find dank bud; lucky neighbors!

These days, finding funny weed pictures is as easy as making fun of President Trump’s latest battle with the English language (I know it was months ago but ‘oranges’ instead of ‘origins’? Really? Did Charles Darwin write about The Oranges of Species? If so, did he put a lot of zest into his writing? Sorry, couldn’t resist).

We have covered the ideal weed birthday and shown one or two pictures of weed, but I would like to offer some more cool marijuana memes showcasing puns. 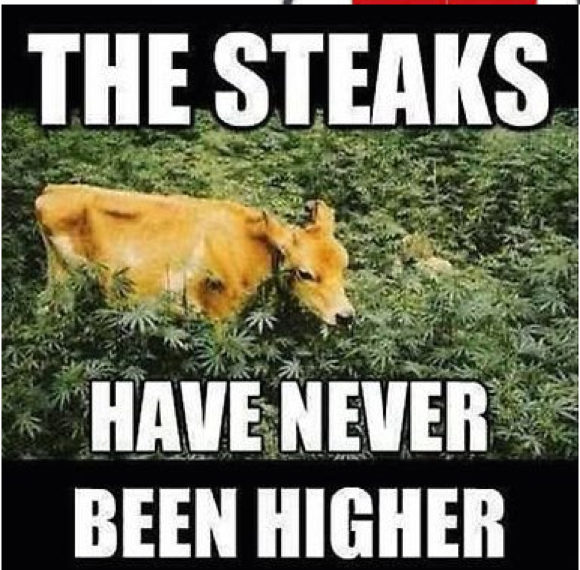 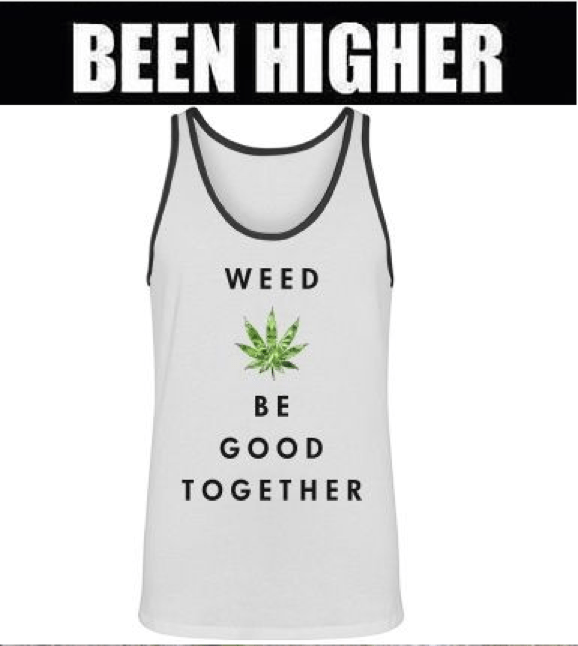 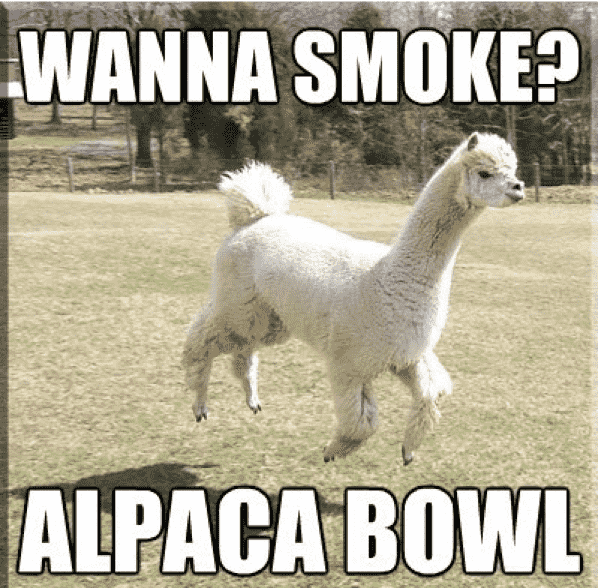 YES! These are all terrible, but I bet you laughed at one of them; if not all of them! They definitely fall into the ‘so bad they’re good’ category. The chances of not giggling at one when you’re high are about as slim as discovering that Jeff Sessions is your smoking buddy.

Marijuana is, of course, a serious matter, which is why there are plenty of knowledge bombs in meme form. Marijuana trivia memes are becoming extremely popular because of the bite-sized nuggets of information they provide. 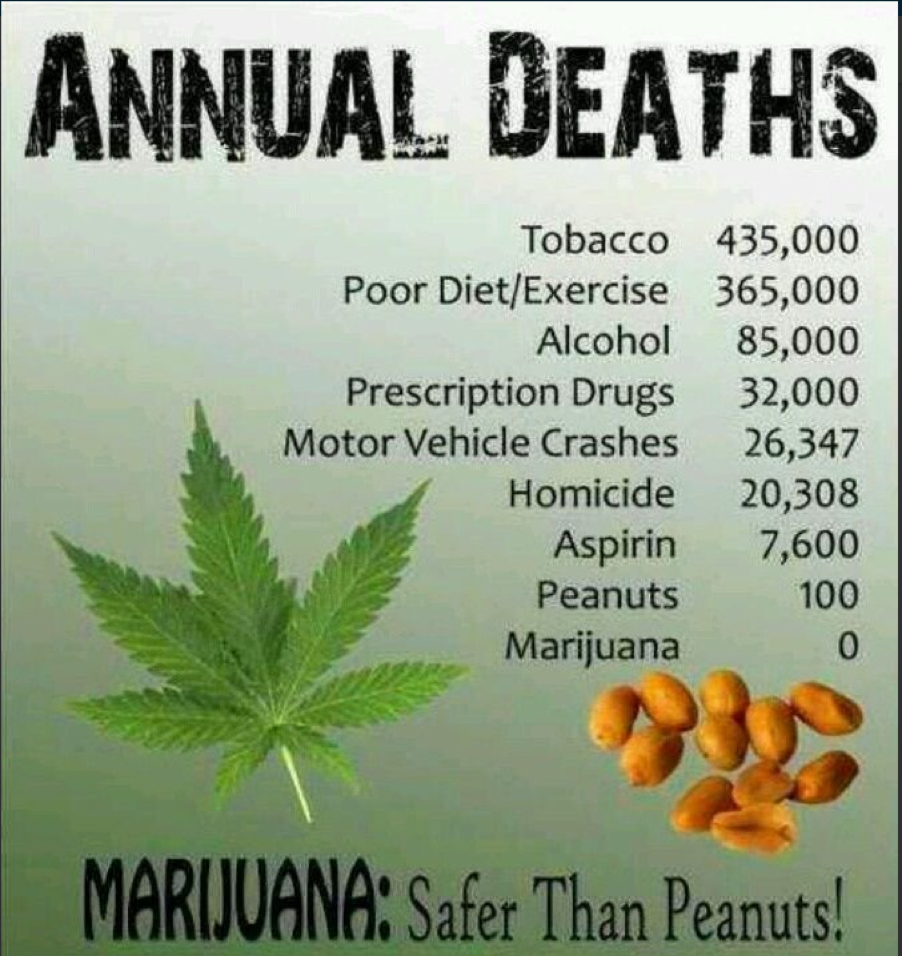 There is no need for the marijuana industry to tell lies when the truth paints the picture we need the public to see. For example, tobacco is available in every store and kills well over 1,000 people a day, usually in horrific circumstances. Even PEANUTS kill more people! 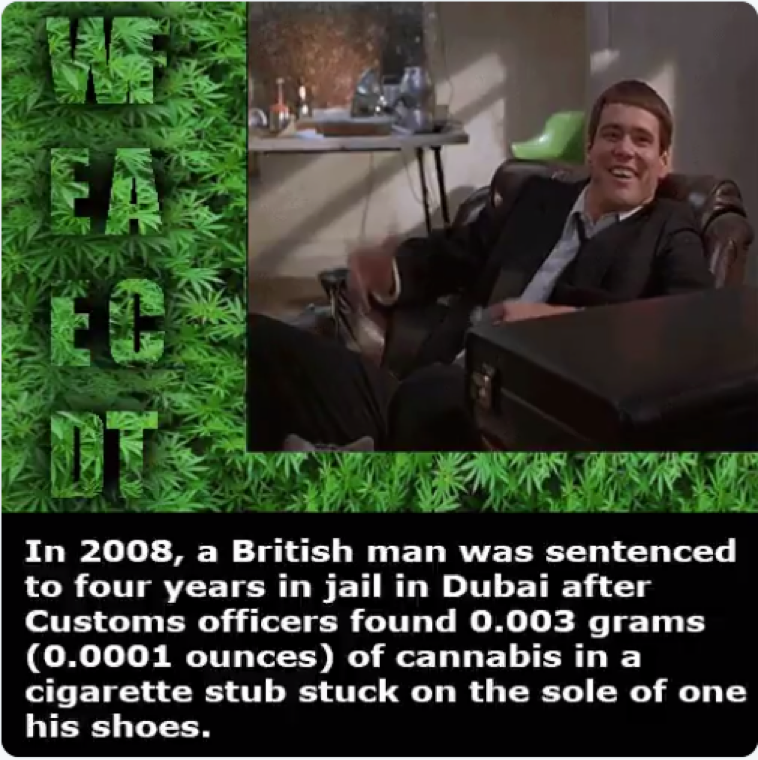 The clear message here is to stay the hell away from Dubai! It is a city known for having a sketchy human rights record at best. A significant proportion of the 250,000 foreign laborers living there allegedly live and work in appalling conditions tantamount to modern slavery. Indentured servitude? Fine. A sliver of weed accidentally sticking to your shoe? Four years in prison. 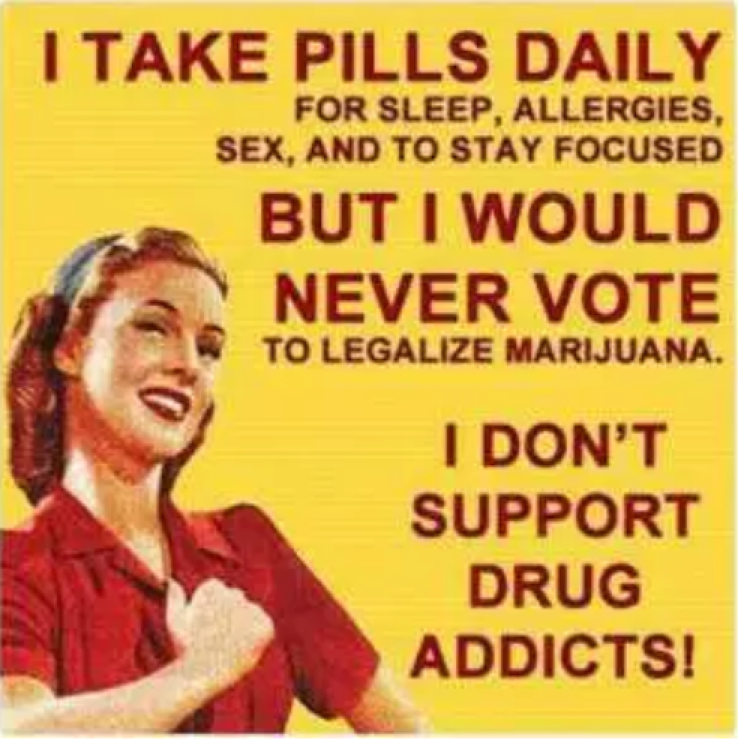 One of the great things about funny marijuana memes is that they can still educate you. In America, we use so many damned pills (way more than any other nation on Earth), yet some people still have this backward idea about weed. Earl takes opioids daily, and is at risk of being one of the 100+ Americans to die from them each day, yet takes to Twitter to complain about the ‘evils’ of cannabis! 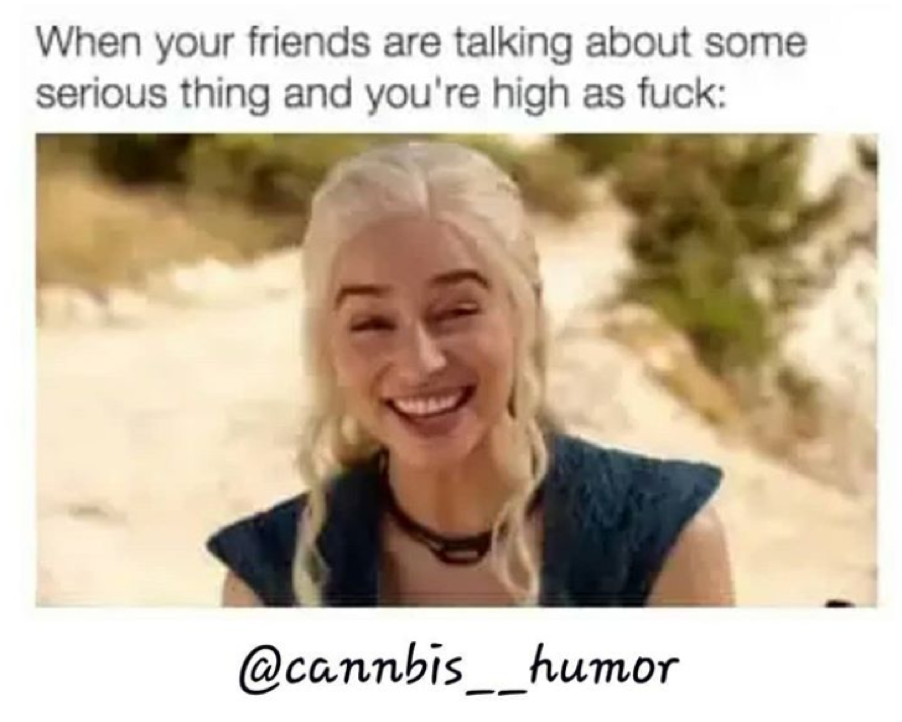 Anyway, less serious talk because weed is meant to be funny. I am not high right now but still find these cool marijuana pics to hit the right spot. 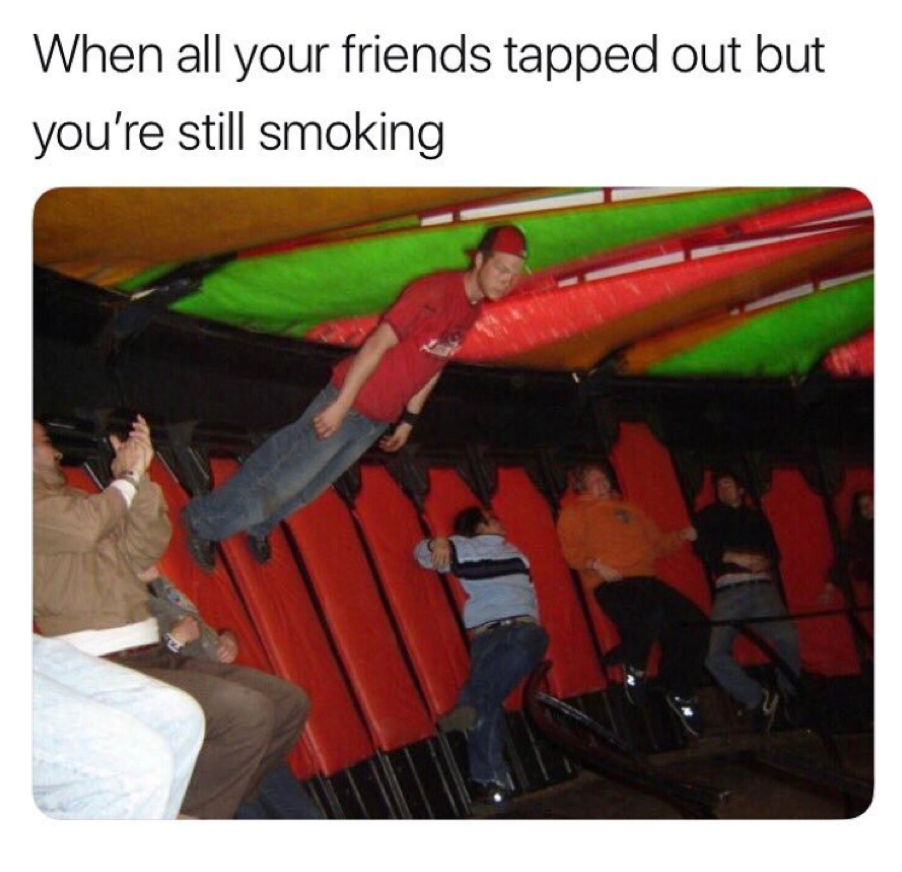 Funny marijuana pics often elicit laughter because they resonate with the person viewing the image. Has the above ever happened to you? Your friends couldn’t stand the heat, but there you are, existing in a higher state of consciousness. Tell Jim Morrison I said hi! 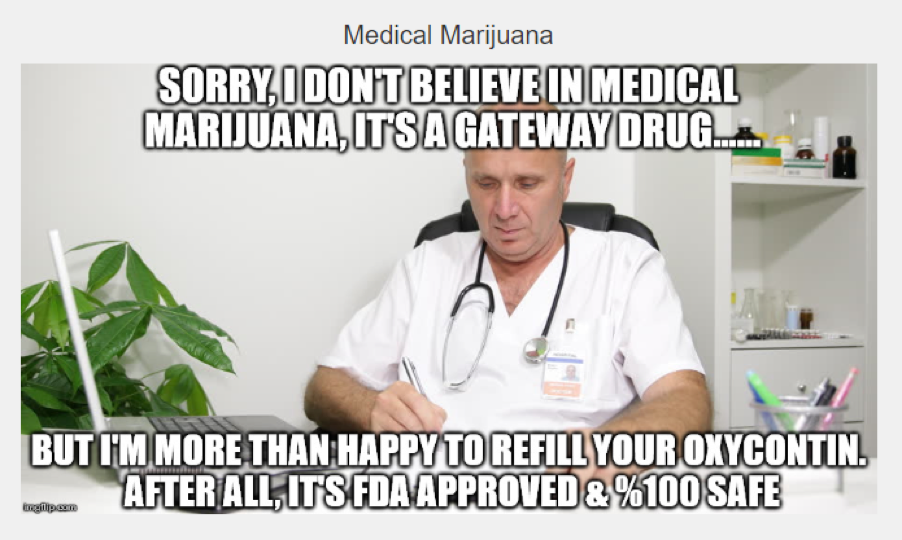 Medical marijuana memes tend to leave the laughter to one side and focus on biting satire. Oxycontin kills and has been dubbed ‘The Hillbilly Heroin’ by some. If you can’t get your hands on heroin, then Oxycontin is the next worst thing. Apparently, the drug was responsible in some way for 80% of crime in a single U.S. county! It is addictive as hell, yet you can legally get a prescription from a licensed physician if you say the right things.

I have covered the sublime and the satirical in this guide to marijuana memes, so it is only right to end it with the ridiculous. 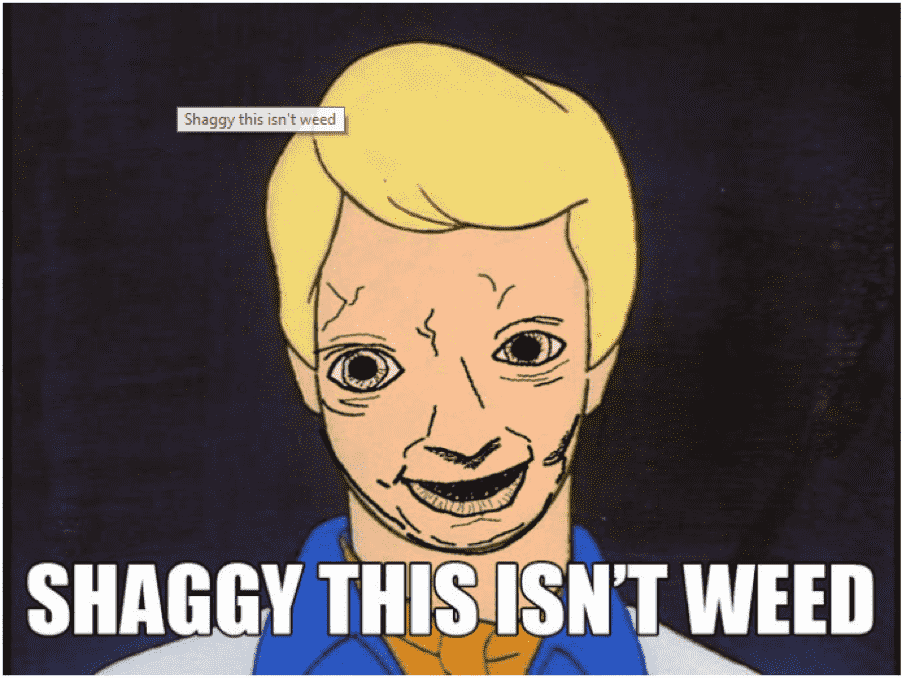 For some bizarre reason, the shaggy ‘this isn’t weed’ memes have become immensely popular online. In case you have NO idea what is going on; ‘Shaggy, This Isn’t Weed,’ relates to a collection of photoshopped images featuring Fred Jones from the Scooby Doo: Where Are You? series of cartoons. A distorted face is edited on to the face of Fred.

The implication is that Fred took some hallucinogenic substance that wasn’t marijuana, and it completely messed him up. It has since been revealed that these memes are in extremely poor taste. The face is actually an illustration of a young girl called Adalia Rose who suffers from Progeria, a rare genetic disorder which involves rapid aging and includes symptoms such as hair loss and dwarfism.

Adalia has gained an element of fame due to the rarity of her condition. However, I personally feel that it is beyond the pale to make fun of her, or anyone with a debilitating medical issue. Although it doesn’t seem like it in this day and age, it IS possible to laugh and enjoy yourself without poking fun at others; unless they are politicians making jackasses of themselves in which case it’s absolutely fine.

The above is a collection of some of the best weed memes around (aside from the Shaggy one). There is a mixture of WTF moments interspersed with marijuana truths, and the fact that opioids suck ass. I leave you with a weed meme featuring comedy legend Bill Murray, who wonders why the hell we continue to criminalize weed. The end of prohibition can’t come soon enough! 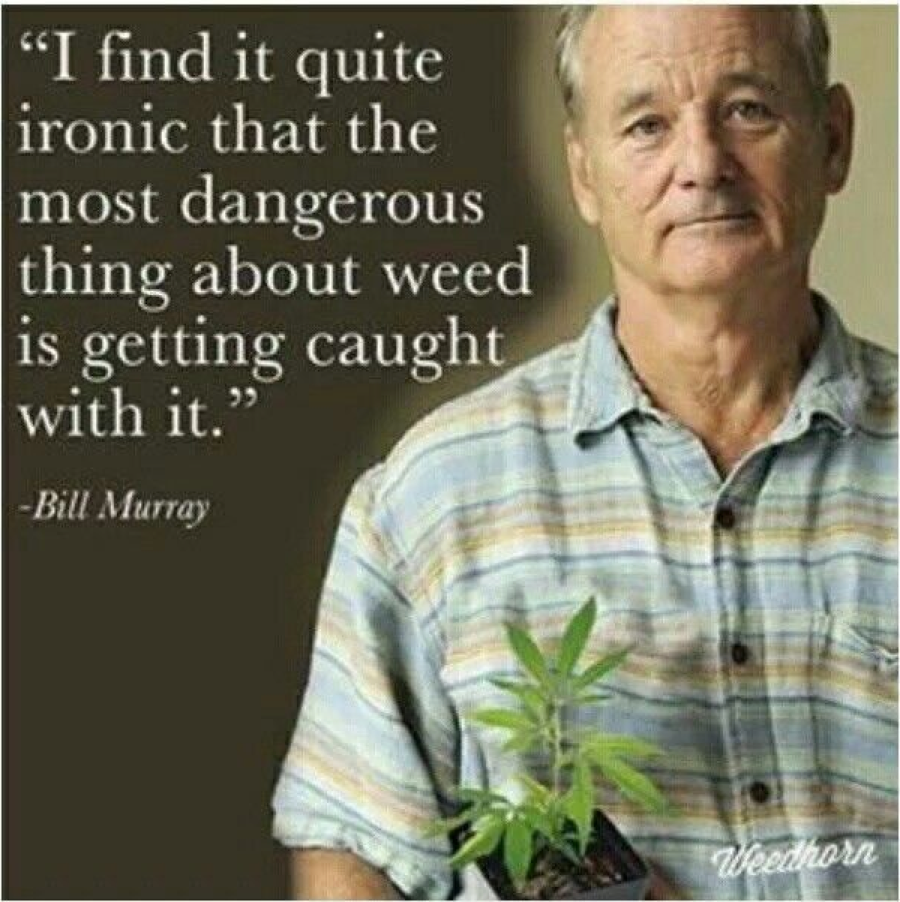