Written by Natalie Saunders, B.A., LicAc
Medically reviewed by Lynn Marie Morski, MD, Esq.
4 min
0 comments
Read Later
The following is for informational purposes only. WayofLeaf does NOT advocate the illegal sale, use, or possession of any psychedelics. Be sure to research, understand, and follow all laws and regulations relating to the use and possession of psychedelics in the state or region you live.

Recent research suggests psychedelics could benefit people living with mood disorders, including anxiety and depression. However, these drugs’ illegal status means that some are choosing to self-medicate rather than seeking a doctor’s advice. Many of these people are already receiving treatment and wondering about the safety of taking psychedelics while on antidepressants.

While we do not recommend using any substance, illegal or otherwise, without medical supervision, we do accept that it happens. Therefore, our goal is to provide up-to-date information to help our readers make a safe and informed decision.

So, do antidepressants and psychedelics interact? Let’s take a look.

Antidepressants and Psychedelics: A Brief Overview

Many psychedelics and antidepressants work by altering the body’s serotonin system. Serotonin is a neurotransmitter that influences brain development, mental processing, perception, and mood. Many experts believe that serotonin deficits contribute to the development of depression, although its precise role is still unclear. 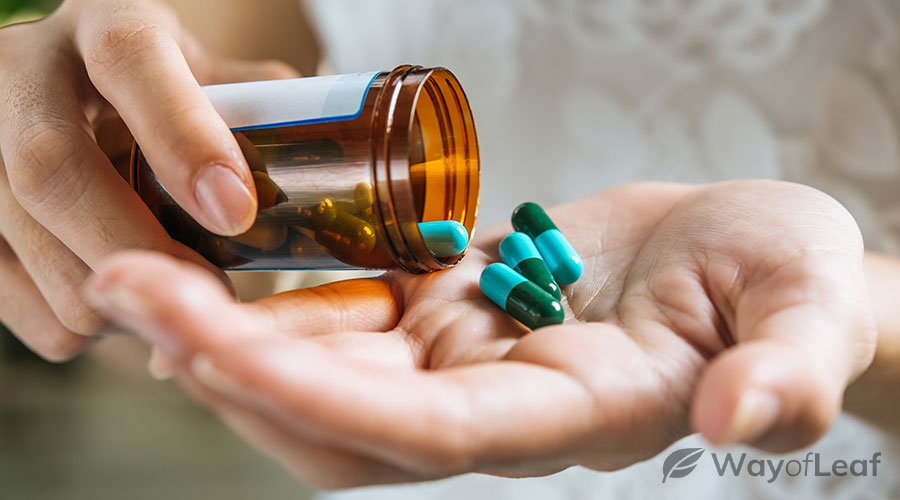 However, rather than increasing neurochemical levels, they bind with serotonin receptors (specifically 5HT2A) to induce an altered state of consciousness.

Interestingly, there are some parallels between psychedelics and the evolution of antidepressants. Researchers discovered LSD and serotonin just ten years apart, in 1943 and 1953, respectively. Both were the subject of numerous research studies throughout the 1950s and 60s.

At that time, scientists were just starting to understand the complexities of the human brain and mental health disorders. Psychedelics played a significant role and were the subject of many clinical papers before they became illegal in the 1970s.

The impact of psychedelics on psychiatry was such that Czech psychiatrist Stanislov Grof compared it to the impact of the microscope on biology.

Below is a brief timeline of how antidepressants have evolved since the discovery of LSD:

Use of Psychedelics with SSRI Antidepressants

Unfortunately, the answer to the question, “can you take psychedelics on antidepressants?” is not straightforward.

Firstly, there has been little research specifically into combining psychedelics with antidepressants. Therefore, much of what we know relies on anecdotal reports and has no scientific basis.

Secondly, there are many different types of antidepressants and many different psychedelics. Therefore, each combination is likely to interact very differently within the human body. 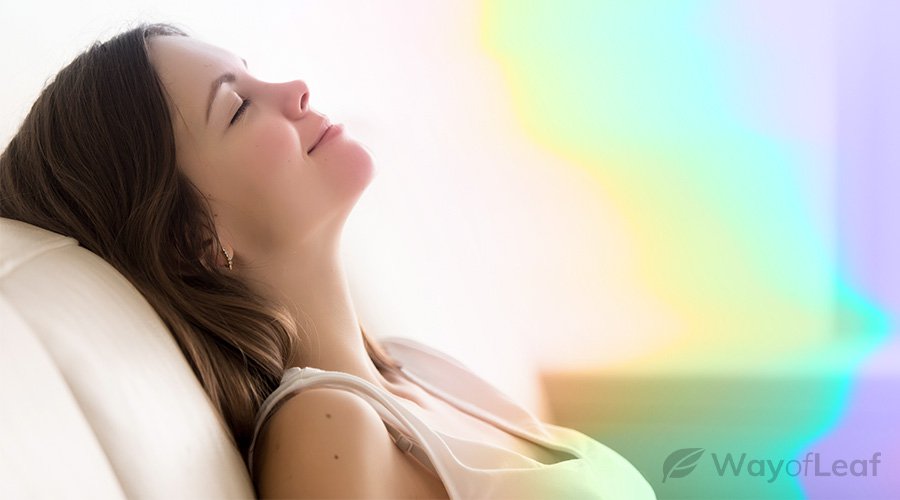 First, let’s look at the classic psychedelics: psilocybin, LSD, and DMT. Anecdotal reports suggest that SSRI antidepressants weaken the effects of these substances. Some users state they experience the cerebral effects of the psychedelics but without any visual distortion.

Then there are the phenethylamines, including MDMA and mescaline. When taken with SSRIs, these drugs may have diminished effects.

Since SSRIs appear to dampen psychedelics’ effects, some people might be tempted to use more to compensate. However, this is strongly advised against.

It is also advised against consuming ayahuasca or ibogaine while taking any antidepressants, including SSRIs. Ayahuasca contains natural MAOI substances, making it highly likely to interact with antidepressants. Taking ayahuasca with SSRIs can cause serotonin syndrome. Meanwhile, ibogaine is potentially toxic and dangerous to consume alongside other drugs.

Is taking CBD oil with Lexapro…

Other Antidepressant Drugs and Psychedelics 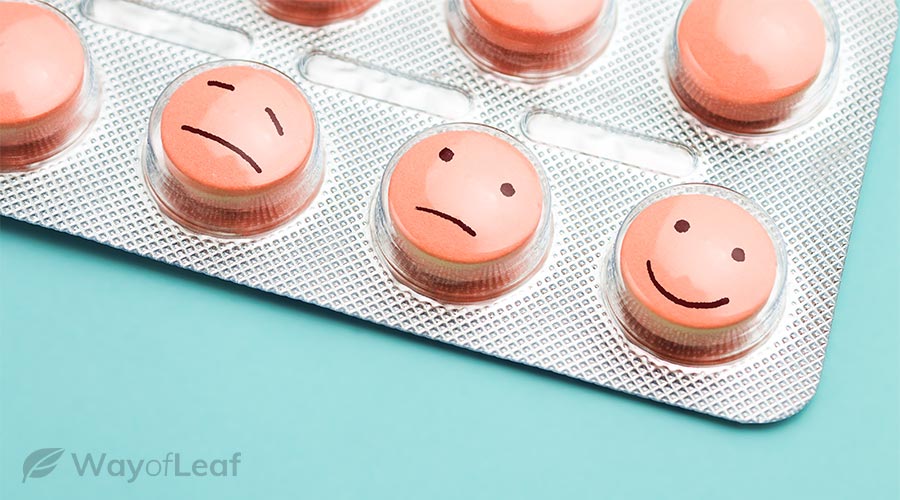 The symptoms of serotonin syndrome are highly variable, and can include:

If these symptoms occur after taking psychedelics with antidepressants, seek medical attention immediately. If possible, bring samples of both substances to help medical staff provide the appropriate treatment as quickly as possible.

In short, for any readers wondering, “can I take psychedelics while on antidepressants?,” we urge extreme caution.

The only psychedelic in which concurrent use of antidepressant medication is recommended is ketamine. The FDA-approved prescription drug Spravato (esketamine) is a nasal spray designed for adults with long-term treatment-resistant depression. The spray, which must be prescribed by a doctor, is commonly used in conjunction with an oral antidepressant.

There is currently no way to be sure whether taking psychedelics with antidepressants is safe. There are many possible combinations of drugs that could all interact in different ways. 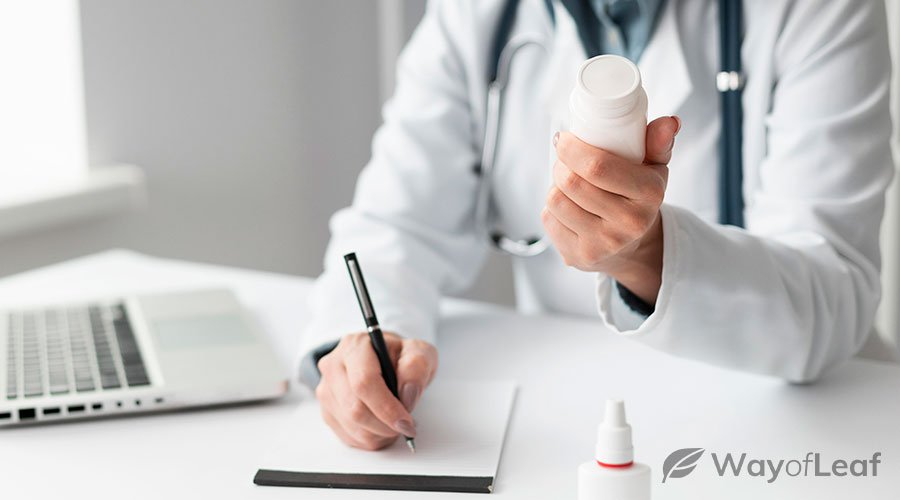 Additionally, every individual has unique brain chemistry. Therefore, one person may use psychedelics and antidepressants together without any ill effects. But another individual combining the same drugs might have an extreme adverse reaction.

Anyone determined to try using antidepressants and psychedelics together should seek an understanding and knowledgeable physician for further advice.