LSA has a similar chemical structure to lysergic acid diethylamide (LSD) and produces hallucinogenic effects. Therefore, some people view morning glory seeds as a legal alternative to the potent psychedelic. However, the fact that they are legal and widely available does not necessarily mean they are safe.

Here is our complete guide to morning glory and LSA, including their uses, effects, side effects, and more.

What Is Morning Glory?

Morning glory is a member of a plant family known as Convolvulaceae. They are creeping vines with heart-shaped leaves and trumpet-like flowers.

There are many different varieties of the plant, and morning glory flowers can be white, purple, or blue. One of the most common varieties is Heavenly Blue (Ipomoea tricolor), which is popular for its striking turquoise blooms. Therefore, Heavenly Blue morning glory seeds are widely available in garden centers and nurseries, along with other related species. 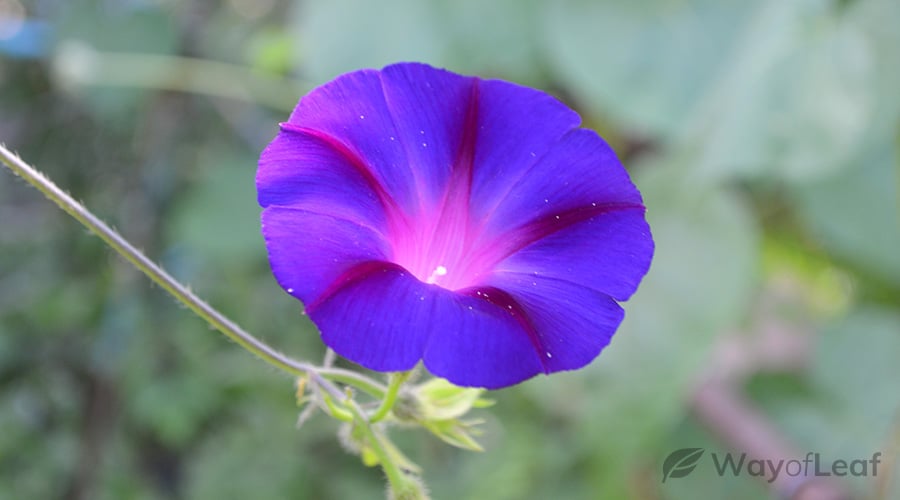 Their accessibility means that some individuals may consider using these seeds for their psychoactive effects. They contain a range of alkaloid compounds, including LSA, that can produce altered mental states and hallucinations.

Other plants that contain the same chemicals include Hawaiian Baby Woodrose (Argyreia nervosa) and Ololiuqui (Rivea corymbosa). A. nervosa is native to the Indian subcontinent and has a role in traditional Ayurvedic medicine. This ancient healing system promotes its use for gonorrhea, difficult urination, ulcers, diabetes, and more.

Meanwhile, Ololiuqui is native to Central America, and the Aztecs and their neighboring tribes used it in religious ceremonies. They also recommended Ololiuqui for treating flatulence, venereal diseases, pain, and tumors.

However, there is currently little scientific evidence supporting the medicinal uses of either plant.

The best way to reduce the risk of confusing these plants with other species is by growing them from seed. However, readers should note that commercial morning glory seeds are usually treated with antifungals and other chemicals. Therefore, they may be toxic and should not be consumed.

According to a report by Albert Hofmann, the Aztecs used Ololiuqui to induce a delirious state and communicate with the Gods. They apparently saw visions and “terrifying hallucinations” and received supernatural messages during these rituals.

However, Hofmann described his own experience with the drug somewhat differently. He stated that it caused: “tiredness, apathy, a feeling of mental emptiness and of the unreality and complete meaninglessness of the outside world.”

A. nervosa, Ololiuqui, and morning glory contain many of the same psychoactive components.

Others have described feelings of indifference, a sensation of “sinking into nothingness,” and a desire to sleep.

These effects are primarily due to the seeds’ LSA content. A 2013 study found that LSA extract from A. nervosa interacted with serotonin and dopamine receptors to produce mild psychedelic effects.

A. nervosa, Ololiuqui, and morning glory contain many of the same psychoactive components. Therefore, morning glory seeds’ effects are likely to be comparable to the other two plants.

LSA-containing plants can also cause numerous unpleasant side effects, and there have been several reports of fatalities after using them. According to a 2017 publication, the side effects of eating morning glory seeds may include:

A 2019 risk assessment of A. nervosa states that the side effects of the plant’s seeds include:

A. nervosa may also induce psychotic states or seizures in susceptible people. Due to the two plants’ similarities, morning glory could also potentially cause these effects.

Some reports suggest that the effects of LSA are similar to LSD, including colorful visual hallucinations and a sense of euphoria. However, LSD is an extremely potent drug, and LSA is far weaker.

A morning glory seed high is estimated to last 4–8 hours. In rare cases, it may persist until the following day.

How Many Morning Glory Seeds to Get High?

It is challenging to calculate an accurate morning glory seed dosage. As a natural product, each seed will contain varying amounts of LSA and other compounds.

The 2017 paper mentioned above suggests that an LSA dose of 2–5mg will produce hallucinations in most people. This is equivalent to 150–200 morning glory seeds, or as few as 10 A. nervosa seeds. 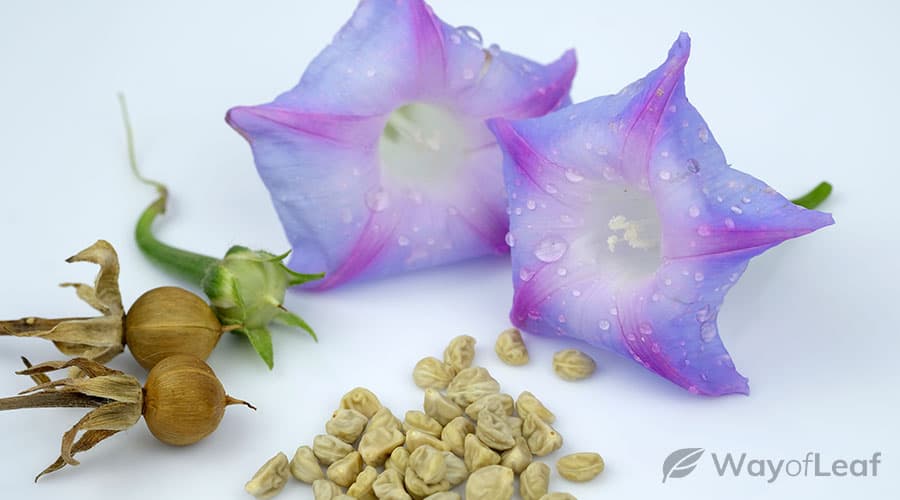 However, this estimate is highly dependent on the individual seed sample and the person consuming it. Therefore, we advise that this figure is for educational purposes only, not a recommended dose.

There are a couple of methods for extracting LSA from morning glory seeds.

Traditionally, the Aztecs would add the crushed seeds to alcohol to create a beverage known as piule. Today, alcohol extraction is still a popular method, although it is also possible to use plain water.

How to Extract LSA From Morning Glory Seeds

Many people have documented the alcohol and water extraction methods online. There are pros and cons to both techniques.

Some individuals claim that this method is superior and reduces the risk of side effects. However, naphtha is highly flammable, and this method is potentially dangerous unless performed by an experienced individual. The entire process can also take several days.

Cold water extraction for morning glory seeds is slightly more straightforward. It involves placing the crushed seeds in boiled or distilled water in a refrigerator for several hours.

Some accounts suggest that side effects are more likely than with alcohol extraction. Many recommend adding garlic to the water 30 minutes before consumption to reduce the risk of nausea.

Morning glory seeds contain LSA, and some individuals use them as a legal alternative to LSD.

However, the plant can cause severe side effects, including fatalities in some instances. As a natural product, it is challenging to calculate the required dosage accurately. The extraction methods can also potentially be dangerous. Therefore, we do not recommend this practice, and anyone choosing to engage in it does so at their own risk.

Rapé: All About Shamanic Snuff

Rapé is a tobacco-containing powder used traditionally by tribal groups across South America as spiritual medicine. Read below for guidance on the safety and legality of rapé and how to use and buy the snuff. What Is Rapé? Rapé (pronounced ra-pey) is a type of snuff, meaning it is a form of ground-up tobacco inhaled […]