While it is natural to panic when your pet consumes cannabis, they will be okay in most cases. That is, as long as it doesn’t eat too much marijuana and you go straight to the vet. For the record, readers with dogs must take extra precautions. According to the Humane Society of Boulder Valley, over 95% of all pets exposed to cannabis are canines.

This article outlines what could happen when your pet consumes marijuana. We also outline what you can expect when you get to the vet’s office. First, let’s see how serious cannabis consumption is in pets.

First and foremost, you must realize that cannabis IS toxic to pets. There are hundreds of chemicals and compounds in the plant. THC is usually the most abundant and causes intoxicating effects in both humans and animals. Dogs are especially sensitive to the effects of marijuana. This is because their cerebellums and brain stems have a higher concentration of CB1 and CB2 receptors than humans.

These brain areas are responsible for respiratory rate, coordination, heart rate, and a host of other crucial mechanisms. Marijuana poisoning in dogs is caused mainly by the THC in cannabis activating these receptors. There is some debate as to the lethal dosage of THC in dogs.

How Much Cannabis is Deadly to Pets?

A 1973 study by Thompson et al., published in Toxicology and Applied Pharmacology, was one of the first to check out potentially fatal THC effects on animals. It found that single oral THC doses of 3-9 grams per kilogram in dogs and monkeys were non-lethal.

However, a 2013 study by Fitzgerald, Bronstein, and Newquist, published in the Topics in Companion Animal Magazine, found something different. It stated that the minimum lethal oral dose of THC for dogs was 3 grams per kilogram. It isn’t easy to understand why the findings were so different. However, it is important to note that the studies related to grams of THC consumption, not grams of marijuana. 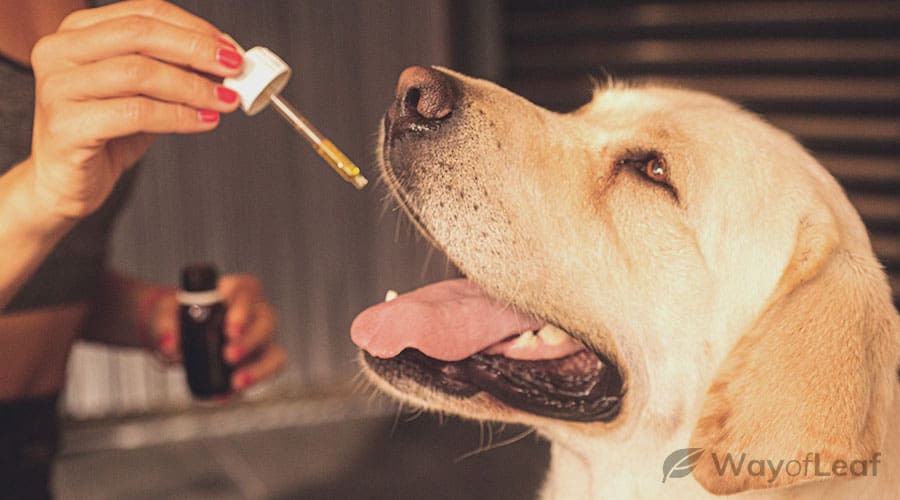 A 2004 review by Janczyk, Donaldson, and Gwaltney, published in the Journal of Veterinary and Human Toxicology, had completely different findings again.

The researchers fed doses of cannabis ranging from 0.5 grams to 90 grams to dogs. The study authors didn’t see signs of distress until a dog had eaten at least 8.4 grams of weed per kilogram. The highest reported dose was 26.8 grams of marijuana per kilogram, almost an ounce. Even that enormous amount did not prove fatal to the dog in question.

Therefore, if your dog weighs 10 kilograms and consumes a full ounce, it is exposed to a level of toxicity that’s approximately one-tenth of what’s possibly lethal. The review focused on marijuana consumption, not THC consumption.

There were two cases of dogs dying after consuming marijuana edibles in Colorado between 2005 and 2010. However, these pets died after asphyxiating on their vomit. This means they did NOT die from marijuana toxicity, though cannabis was ultimately the cause.

You can expect your pet to begin showing symptoms within an hour of consumption. However, it could take up to three hours if they eat edibles. As is the case with humans, animals react differently to marijuana consumption. An estimated 25% of them become anxious and over-excited, but the majority become depressed and lethargic.

Once your pet has eaten marijuana, the THC is quickly absorbed into the bloodstream. Approximately 30% of animals display gastrointestinal symptoms, including diarrhea, vomiting, and drooling. As THC is fat-soluble, your pet could exhibit mild symptoms for several days. Other effects include:

If you don’t see any of these symptoms but know your pet consumed marijuana, take them to the vet. The vet will immediately perform a physical examination, including a urinalysis, bloodwork, and a biochemistry profile. The vet also tests your pet’s urine for cannabinoids.

In some cases, the vet may even perform a gas chromatography test. While it will take days for test results to come back, your vet can diagnose marijuana toxicity during the appointment.

Depending on the timing of your pet’s ingestion, and its reaction to the chemicals, your vet may attempt to ‘decontaminate.’ This process involves providing medicine to stop vomiting, along with activated charcoal to limit additional THC absorption.

If you care about your pet’s wellbeing, it is essential to be upfront with the vet. You need to admit that your faithful friend was exposed to cannabis. There are no legal hassles involved as veterinarians are not obliged to report weed exposure.

Time is of the essence. The quicker you get your pet to the vet, the faster he or she can treat it. Ideally, a professional will see your pet less than 30 minutes after ingestion. This enables the vet to induce vomiting to remove the cannabis from the stomach. It is dangerous if the vet tries to induce vomiting after the 30-minute window has elapsed. That’s because a potentially deadly condition called aspiration pneumonia becomes more likely to occur.

If your pet is severely agitated, the vet could administer benzodiazepines to sedate it. If your pet is vomiting, the vet might use IV fluids to combat dehydration. Overall, the vet will monitor your pet’s blood pressure and oxygen levels. In severe cases, the vet will place your pet on a respirator or ventilator.

Your pet’s recovery depends on its level of exposure and the speed of treatment. As you can glean from the studies we posted above, your pet’s weight plays a role in toxicity levels. A 20-pound dog that eats half an ounce of cannabis is likely to be more severely affected than a 50-pound dog that consumes the same amount.

In most cases, the effects last no more than a couple of days and aren’t permanent. If exposure is minimal, your pet could feel better a few hours after treatment. It is important to note that almost all research into marijuana exposure in pets to date has been performed on dogs.

In rare cases, dogs that consume cannabis will show static ataxia symptoms. This means the canine will have difficulty standing and also seems rigid. If this happens, your dog needs immediate medical attention because static ataxia is a potentially fatal condition if left untreated.

The severity of toxicity and the length of time marijuana’s cannabinoids remain in the body depends on a combination of factors unique to each animal. As well as your pet’s size, its breed, age, and general health all play a role too. The best way to protect your pet from accidental exposure is to use and store your cannabis responsibly.

Keep all marijuana products stored in sealed containers in cabinets far out of a pet’s immediate reach. If possible, keep your containers in locked cabinets. Never leave your cannabis unattended when using it. Also, don’t leave any remnants in a compost bin or open trash container. Finally, keep your pet in a separate room when you use your marijuana.

10
6 min read
Join the discussion
TOC
Premium
Your subscription has ended
If you love cannabis and want to support our site, join WayofLeaf Premium today and unlock
Best of all, part of your membership fee will go towards supporting the fight to legalize cannabis.
Sign Up for WoL Premium
Not now
I already have an account
×
Log in to Your Premium Account