A lot of people are surprised to discover that marijuana and working out are a popular combination! There is a long-held assumption that cannabis hinders athletic performance. The trouble is, the evidence doesn’t completely support this assertion. In fact, some research suggests that using weed and working out is something that produces positive results.

If you believe the stereotypical view of a ‘stoner,’ exercise doesn’t come into the equation. The belief is that weed users spend their time lounging on the couch with no motivation to train. In this article, we analyze research into marijuana and working out. Rather than ‘making you lazy,’ it could energize you and help you get moving.

Does Smoking Weed Affect Working Out?

There is no question that smoking weed and working out is different to training while ‘sober.’ Far from keeping you feeling relaxed and listless, cannabis could give you the kick in the butt you need. A study by YorkWilliams et al., published in Frontiers in Public Health in 2019, revealed something interesting.

The researchers focused on the relationship between weed use and exercise in states that allow the drug. They surveyed approximately 600 marijuana users in five states that permit adult-use of the herb. 80% of users say they consume weed shortly before their training session. 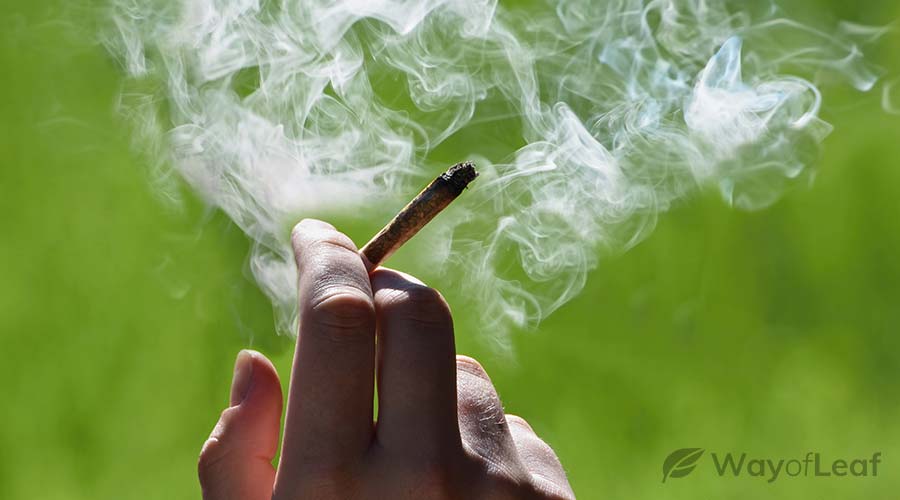 Two-thirds of the group said they used it before and after exercise! Those who had weed less than an hour before a workout, or less than four hours after, exercised more. They reported getting over 40 minutes of exercise a week more than those who didn’t use it close to their training time.

Over half of the respondents claimed that Mary Jane gave them extra motivation to train. Almost 80% said it aided recovery, and 70% claimed it enhanced the level of enjoyment experienced. Therefore, working out on marijuana could pay unexpected dividends.

How Does Marijuana Affect Working Out?

If you are interested in marijuana for working out, you may want to understand why and how it could help. One of the first considerations is the fact that cannabis could reduce exercise-induced inflammation. A study by Pandey et al., published in Pharmacological Research in February 2011, looked at endocannabinoids and immune regulation. The researchers found that THC and CBD could act on immune functioning and trigger an anti-inflammatory response.

One reason why many people avoid exercise is due to the pains they feel in their joints. It seems as if cannabis could help there as well. A study by Ware et al., published in the Canadian Medical Association Journal in October 2010, found that arthritis patients reported lower pain intensity when using MMJ. All it took was a single inhalation of 25mg of weed with 9.4% THC to reduce pain. Most strains in legal dispensaries contain a significantly higher percentage!

There is another reason to consider working out and marijuana.

Ideally, you will find a form of exercise that you truly enjoy. This varies depending on the individual. Some people love the challenge of endurance events such as running a marathon. Others prefer the muscle-building joys of weightlifting. Yet there are tons of other ways to get in shape and enjoy it! You could take up a sport like boxing, soccer, or swimming. If you have a love of dancing, that too is a great way to train.

The most important thing is to have fun with it. According to thousands of anecdotal reports, cannabis can help with this process. Although weed doesn’t seem to aid performance, it could prove useful for getting you mentally prepared. A significant number of people really don’t enjoy exercising regularly. Even those who have caught the bug have days where they would rather do something else.

It is on such days that marijuana earns its corn. No matter what, putting your body through exercise regularly also causes a significant amount of mental fatigue. It is easy to develop a negative association with working out. The tougher you perceive your training session, the more mental fatigue you feel.

Yet those who try cannabis before exercising say they often have to remind themselves to stop! A survey of over 600 people, published in Nature, revealed that weed helps provide a positive approach to training. 70% of the respondents admitted that being high improves the enjoyment of their session! Indeed, there is ample evidence of marijuana providing a short-term mood boost.

However, should you dabble before you train, or wait until you are finished?

Smoking Weed Before Working out – Should You Do It?

If using marijuana before working out, make sure you try a minimal amount first. Also, don’t begin the process if you are not a moderately experienced user. It is also fair to warn you that cannabis can cause an increased heart rate or tachycardia. If you have an underlying heart problem, consuming weed may enhance your risk of heart complications. Remember, exercising already increases your heart rate, so it isn’t difficult to see potential issues.

In the aforementioned Nature survey, 40% of respondents said they experienced higher than average heart rates when working out after smoking weed. This caused them to bring a halt to their exercising for safety reasons. As a result, you should stick to a form of exercise that doesn’t cause a rapid rise in the heart rate.

This isn’t great news if you like more intense exercise. However, you can see some fat-burning benefits by keeping your heart rate between 55% and 70% of its maximum. When you exercise in this fashion, your body uses more fat than carbohydrates for fuel. Ideally, a trainee will mix up their workouts to include different intensities and heart rates.

If you insist on working out after smoking weed, stick with less intense forms of training. Already, cannabis is gaining popularity amongst those that perform endurance sports. If your session calls for a 10-mile run, you might find that a few tokes help you grind through the monotony. Various competitors in endurance races say they use weed 30 minutes before embarking on a training run.

Logically, you should look to have an edible, rather than smoking or vaporizing the herb, though some experts disagree.

Smoking Weed AFTER Working out – A Wise Choice?

Should you consider using marijuana after a workout? The main reason to consider using it is to aid recovery. There is plenty of data on cannabis, according to Jordan Tishler, M.D., who trained at Harvard. The trouble is, most of it looks for harm rather than the possible benefits.

Therefore, we don’t have significant data on whether weed can help a person recover post-exercise. The little information we have suggests that cannabis could have anti-inflammatory effects. It may help reduce the swelling that comes with inflammation as well. Perhaps the more significant issue is whether these anti-inflammatory effects are of great enough magnitude to help heal muscle damage.

It is highly likely that consuming marijuana post-workout will at least help reduce Delayed Onset Muscle Soreness (DOMS). This may enable you to return to the gym faster. We hope that further research will help shed additional light on this critical question.

Summary of Marijuana and Working out

When it comes to weed and working out, it is difficult to draw any conclusions. The level of sports-specific research isn’t enough. If you elect to try cannabis while training, always make sure you use a tiny amount at first. While most people like to use edibles, Tishler doesn’t think it is the best option.

He prefers vaporization because of its rapid effects. Tishler suggests that you have no control over when or how an edible will kick in. Inexperienced users often allow their impatience to get them into trouble. They take a second edible because the first one hasn’t affected them after an hour. It also makes sense to vaporize weed if you’re looking for rapid pain relief.

No matter when or how you combine marijuana and working out, make sure you drink plenty of water. THC makes your glucose metabolism work harder, so you must hydrate frequently. Some trainees also add CBD to the mix, to help keep them more focused on their exercise.