Tetrahydrocannabinol, better known as THC, is the chemical responsible for the vast majority of weed’s psychoactive effects. Does your body feel like it’s floating on air and your brain is in another plane of existence with pot? If so, you can thank THC for the experience. It is unquestionably the best-known cannabinoid. Even so, there is an extraordinary number of things that the average person doesn’t know about marijuana, primarily THC. We hope to fill in some of the gaps in your knowledge in this article.

According to E. L. Abel in ‘Marihuana: The First Twelve Thousand Years,’ the history of cannabis goes back to at least 10,000 BC. This means marijuana is one of the oldest cultivated crops in human history. We grew it at around the same time that we began grinding wheat and barley in Iran’s Zagros Mountains.

Archaeologists have found burned cannabis seeds in Siberian burial mounds that are over 5,000 years old.

Also, the ancient Chinese routinely used it in medicine. Much is said about the ‘first written’ account of cannabis use. In 2,737 BC, Emperor Shen Nung allegedly used weed and wrote about its health benefits. However, historians are confident that the famed ruler never existed.

Pot reached the South Asian subcontinent between 2,000 BC and 1,000 BC and ended up in the Middle East at around the same time. Slowly but surely, the herb traveled around the world.

Colonial farmers in Connecticut, Massachusetts, and Virginia were required to grow hemp in the 16th century. However, marijuana only spread throughout the United States in the early 20th century. It was here, after thousands of years of uninterrupted usage, that the likes of Harry Anslinger blackened the name of weed in the 1930s. Ever since, it is synonymous with a host of lazy stereotypes and remains federally illegal. 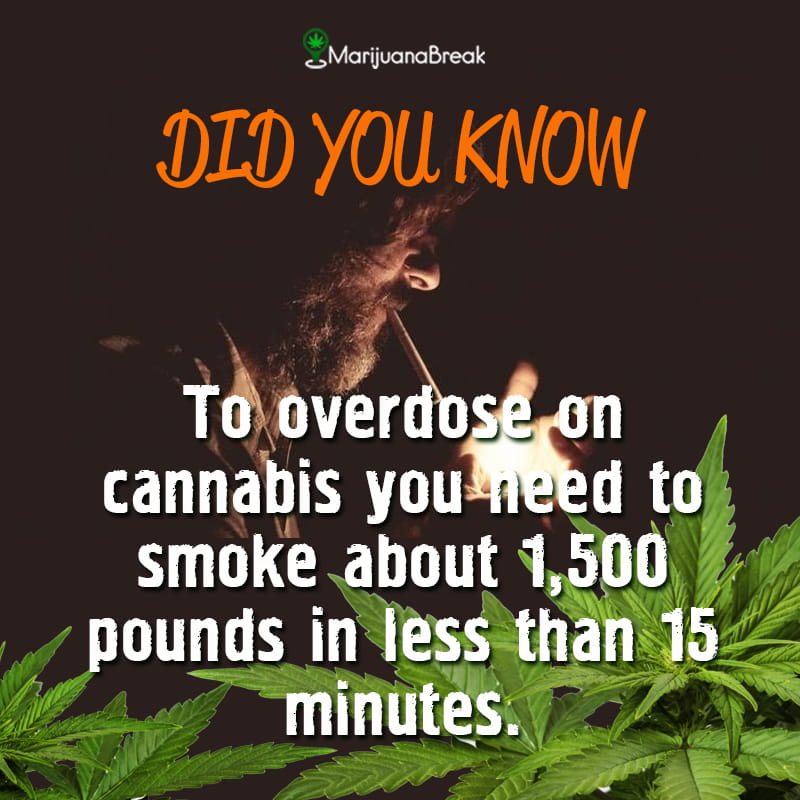 In its lengthy history, the number of people who have overdosed on marijuana remains stuck firmly on zero. It will stay that way. Unless of course, someone figures out a way to consume around 1,500 pounds of it in approximately 15 minutes. In 1988, the DEA-appointed judge, Francis Young, suggested it would take that extreme amount to cause a fatal response.

In the medical field, each drug receives what’s called an LD-50 rating. It outlines at what dosage 50% of test animals receiving it will die as a result of toxicity from the drug. Research has found that for marijuana, the LD-50 is between 1:20000 and 1:40000. You would need to smoke between 20,000 and 40,000 average-sized joints.

You also need to do so within the space of several hours to have a 50% chance of dying from the toxicity of the active compounds. Overdosing on THC is almost a theoretical impossibility, let alone a practical one.

Meanwhile, opioids kill more people than breast cancer. Recent CDC figures are damning. A report revealed that 702,000 people died from a drug overdose in America from 1999-2017. Opioids accounted for 68% of these fatalities. Yet incredibly, these death pills are legal while weed continues to remain illegal on a federal level.

3 – THC Is One of Hundreds of Marijuana Compounds

Identified by Dr. Raphael Mechoulam during his research between 1963-1964, THC is the most famous weed compound. However, as of today, scientists have identified almost 500 different chemical compounds and at least 65 cannabinoids in marijuana. Although, other estimates say this figure is over 110. At present, the medicinal effect of the vast majority of cannabis compounds is unknown.

4 – THC Is Non-Intoxicating When Fresh

This is one THC fact that will probably shock everyone! Before decarboxylation, THC is THCa and is non-intoxicating while in this “raw” form. There is a growing number of physicians who use raw, fresh cannabis to treat patients. They say THCa has medicinal qualities that get lost after the marijuana plant is heated.

Also, you can metabolize THCa in larger doses than its psychoactive brethren, which means it is potentially even more useful. Research suggests that THCa has outstanding anti-inflammatory and anti-proliferative properties. Indeed, THCa could also have anti-spasmodic properties which would help patients to control seizures.

At present, THCa is primarily used by patients with chronic immune system conditions. Patients with lupus have also reported that juicing cannabis is helpful, after trying up to 40 different types of ‘traditional’ medications.

Once you expose cannabis to heat, you begin the decarboxylation process. It turns THCa into the THC cannabinoid that results in an intoxicating high.

Related article
What Is THCA? [Exploring the “Other” THC…]

5 – THC Becomes Another Cannabinoid When It Degrades

If you’ve ever tried old and ‘stale’ weed, you may experience a rather ‘unusual’ high. Users report that they feel far groggier and more lightheaded than they do when using fresh pot. The reason for this odd feeling is because marijuana is laden with a cannabinoid called cannabinol (CBN). It forms when you expose THC to light and oxygen.

Typically, dried and cured strains of cannabis will have little more than 0.5% CBN. However, when weed becomes stale, the process of oxidation causes its THC to transform into CBN. While stale marijuana sounds less than appealing, research suggests that CBN has a set of unique benefits.

Most relevant is the fact that CBN is arguably one of the world’s greatest sedatives. If you’re in dire need of sleep, CBN can help you overcome even intense bouts of insomnia. Back in 2008, archaeologists found almost 800 grams of cannabis in a Chinese tomb. The weed was nearly 2,700 years old and extremely high in CBN.

You have probably heard of a few of the most common ones, such as ganja, Mary Jane, pot, and weed. Did you know that there are approximately 1,200 slang terms for cannabis? Herodotus wrote about the herb in 440 BC. However, the word ‘cannabis’ did not appear in the Oxford dictionary until the 16th century. The book described it as parts of the plant that were “smoked, chewed, or drunk for their intoxicating or hallucinogenic properties.”

The term ‘ganja’ is a Sanskrit word and not a Rastafarian word. There is a suggestion that Indians named it after the River Ganges. ‘Pot’ comes from at least the 1970s, if not earlier. It’s related to a Spanish mulled wine known as ‘potiguaya.’ It is a special kind of wine because marijuana buds are steeped in it. ‘Weed’ became a slang term in the 1980s, as weeds are tough, durable, and grow everywhere.

‘Marijuana,’ actually misspelled ‘marihuana,’ came from Mexican Spanish and was the name of an herbal mix smoked by Mexicans. A large number of people traveled north of the border during the Mexican Revolution. They brought large amounts of the herb with them.

The unappealing view of these immigrants meant that everything associated with them carried negative connotations. Therefore, the word ‘marijuana’ described cannabis, an ‘evil’ drug. Its prohibition in the United States was guaranteed and occurred in 1937.

One of the reasons for the large number of slang terms is because of weed’s illegality. Over the years, users had to speak in code to ensure their ‘criminal’ activity remained uncovered. Unusual names for cannabis that you may not have heard of include Houdini, Airplane, Climb, Aunt Mary, Muggle, and Nixon. The latter refers to low-grade marijuana sold as a high-quality bud).

7 – You Can Enjoy Your THC Hit in Many Different Ways

Everyone knows that you can smoke marijuana and also consume it in the form of an edible. However, there are a variety of ways to derive the benefits of Mary Jane: 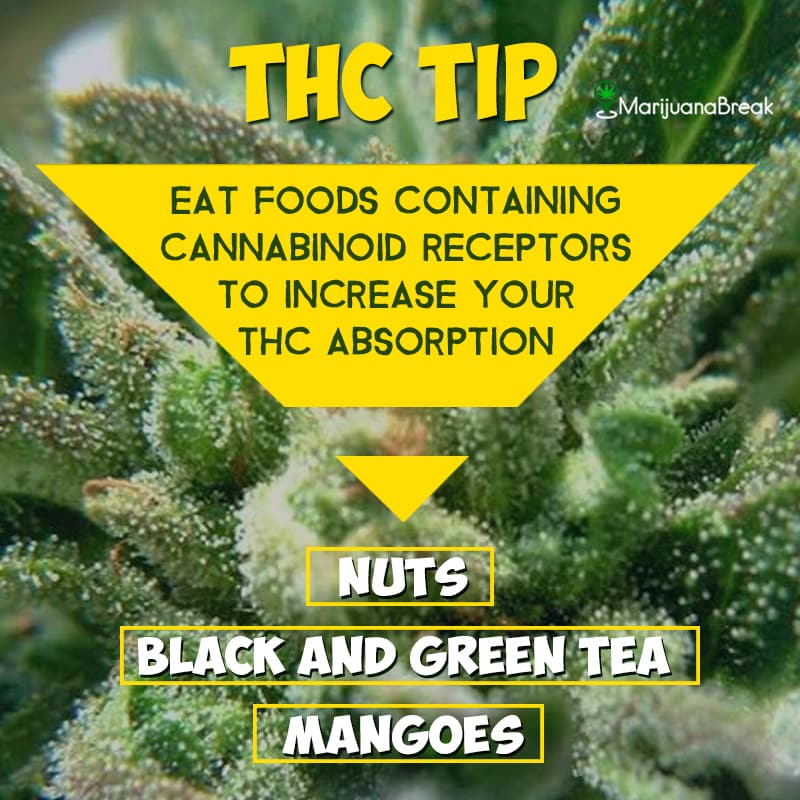 8 – In Bhutan, Farmers Feed Weed to Their Pigs to Make Them Fatter

Bhutan is a tiny mountainous nation in South Asia with a population of around 800,000 people. Marijuana is illegal for human consumption there. This fact is a bit of a tease when you consider how much of it grows in the country. It grows so prolifically that it’s regarded as a pest! It established itself in Bhutan in around 10,000 BC and today, it grows almost everywhere. Seriously, weed grows on the streets and rooftops of Bhutan’s villages!

Bizarrely enough, cultivation, production, and manufacturing of marijuana in Bhutan are punishable by a prison term of up to five years. Even more unusual is the fact that despite its illegality, farmers are allowed to feed it to their pigs! The whole ‘marijuana gives you the munchies’ stereotype is true depending on the strain. Since the pigs get fatter, Bhutanese farmers are well aware of cannabis’ ability to stimulate the appetite.

Love weed but live in a state where recreational use is illegal? If so, you must occasionally cast an envious eye at residents of Denver, Colorado. There is seemingly a weed dispensary around every corner in the Mile-High city. The state legalized recreational use in 2012, and Colorado’s coffers are positively bulging from the additional income.

The end of prohibition has led to the rise of the marijuana dispensary. Denver is the capital of Colorado. With a population of 716,000, it is a relatively small city by American terms. Therefore, you may be astonished to learn that it is closing in on 400 dispensaries.  There are over 160 ‘recreational’ ones and close to 200 medical dispensaries. In contrast, there are little more than 110 combined Starbucks and McDonald’s businesses.

It is a similar story in Portland, Oregon, a state where recreational cannabis is also legal. The city has 28 dispensaries per 100,000 people. It also has 16.5 Starbucks and 3.1 McDonald’s stores.

10 – THC Is Only Fully Legal in Two Countries Worldwide

In December 2013, Uruguay became the first nation in the modern era to completely legalize weed. In August 2014, the law allowed residents to grow up to six plants at home. The government also announced the formation of a marijuana dispensary regime that would be controlled by the state. By October 2014, ‘grower’s clubs’ were registered which are allowed to grow up to 99 plants a year. Also, in 2017, a total of 16 pharmacies received the authorization to sell weed commercially.

Canada followed suit in October 2018. The minimum age for purchase is 19, barring in Quebec and Alberta, where 18-year olds can buy it. The maximum amount you can legally possess is 30 grams. Each Canadian state has unique cannabis laws, so check them out before you travel.

Experts in the industry believe that countries such as the Netherlands, Italy, Czech Republic, Jamaica, and France will ultimately legalize the herb. As for the United States, it is legal in 11 states and Washington, D.C. However, we don’t expect it to become federally legal in the near future.

Dozens of nations such as Australia, Croatia, Germany, and Portugal have an MMJ program of sorts.

Final Thoughts on Marijuana and THC

The bottom line is that humans have used pot for at least 12,000 years. During this time, no one has ever died from a marijuana overdose. While Denver residents can smoke in private, it isn’t so easy for people in other parts of the world.  A simple possession charge could lead to fines, jail time, or even a prison sentence. Of all the compounds in marijuana, THC is not specifically the ‘best,’ but it is probably the most fun!

0
5 min read
Exploring CBGa: The Mother of All Phytocannabinoids

0
5 min read
Guaiol Terpene: What Is It, And What Does It Do in Marijuana?

0
3 min read
What Is Anandamide? [The Definitive Guide]

0
5 min read
Trichomes: What Are They Used For?

1
5 min read
Photosynthesis in Cannabis: How It Works

4
3 min read
What Is the “Entourage Effect”? [Thoroughly Explained]