Chinese medicine is one of the most ancient healing systems in the world and has been used for over 2500 years. It is still practiced today in a relatively unchanged form by practitioners both in China and around the world.

Chinese medicine was practiced long before modern medical equipment was invented. It developed and grew based on observations of the natural world and their interactions with the human body. Similarly, ancient physicians did not have access to the pharmaceuticals that are available today, such as antibiotics and powerful painkillers.

Therefore, ancient doctors developed practices for treating patients, including acupuncture, moxibustion, massage, and herbal medicine. One herb has played an essential role in Chinese medicine throughout its history. This same herb, which is now creating a massive buzz in the modern medical world, is cannabis.

In modern Chinese medicine, hemp seeds are a popular remedy used for their mild laxative effects. Hemp seeds are the only part of the plant that is in regular medicinal use today. Historically, however, all parts of the cannabis plant were used, including the flowers, leaves, and roots.

In ancient medical texts, aside from cannabis seeds, its flowers are by far the most commonly mentioned part. The use of cannabis flowers is likely due to their higher concentrations of cannabinoids, such as cannabidiol (CBD) and tetrahydrocannabinol (THC). Particularly when compared to the leaves and roots.

Cannabis flowers were used to treat a wide range of different medical conditions over the centuries. These uses have been recorded and well-documented in various texts. By looking at documents from 2000 years ago, we can study the historical uses of cannabis in Chinese medicine. We can also learn more about its applications in the modern world.

A Brief History of Cannabis Use in Chinese Medicine

The first mention of cannabis in Chinese medical literature is in The Divine Farmer’s Materia Medica. This was published approximately in the first to second century CE. This book is attributed to the legendary emperor, farmer, and herbalist Shen Nong. Despite being written more than two millennia ago, it is still in clinical use today. 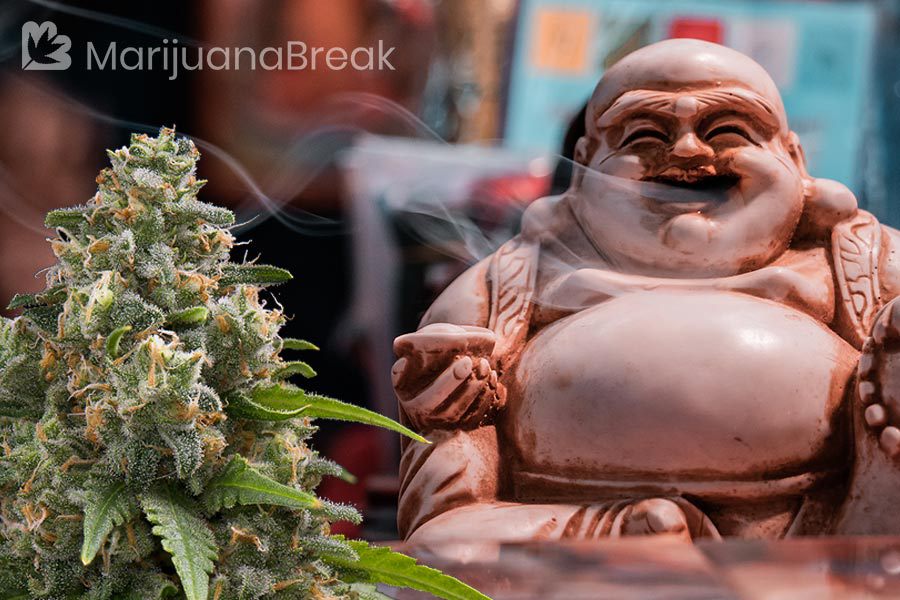 According to this text, cannabis has acrid and balanced properties. It is said to govern the five taxations (excessive use of the eyes, excessive lying, sitting, standing, and exercise). It’s also said to rule the seven damages (over-eating, cold food and drink, climatic extremes, rage, fatigue, grief, and fear). Furthermore, cannabis is said to benefit the five viscera (the heart, liver, lungs, kidneys, and spleen.) Marijuana is also believed to descend blood and cold qi.

It is clear from the text that cannabis was considered to be a panacea, with far-reaching benefits. Yang Huating interpreted the statement about descending blood and cold qi in his 1935 book Illustrated Analysis of Medicinal Substances. He believed that it meant “quickening the blood.” Therefore, he recommended cannabis for a wide range of conditions, including headaches, menstrual issues, itching, convulsions, and dry cough.

The original text also states that excessive use of cannabis causes one to “see ghosts and run about frantically.” It seems likely that this is a reference to the plant’s psychoactive properties.

Cannabis as an Anesthetic in Chinese Medicine

Approximately around the third century CE, a famous Chinese physician named Hua Tuo was pioneering new surgical techniques and anesthesia. He created a formula called Ma Fei San, which was used as an anesthetic during his cutting-edge procedures. The name Ma Fei San shares one of its characters with the Chinese name for cannabis, ma. This fact has led many scholars of Chinese medicine to speculate that marijuana was a primary ingredient in this preparation. However, following Hua Tuo’s death, the original formula was lost, so there is no real evidence to support this.

Cannabis was first definitively listed as an anesthetic in Bian Que’s Heart Text of Bian Que (1127-1270). Cannabis, mixed with other herbs, was said to send the patient into a “stupor-slumber in which the person experiences no pain and is not harmed,” a testimony to the herb’s numbing properties.

Around the sixth century CE, the Additional Records of Famous Physicians was added to the original Divine Farmer’s Materia Medica. In this text, the author Tao Hongjing adds to the original description of cannabis. He states that cannabis can be used to “break accumulations, relieve impediment, and disperse pus.”

In Chinese medicine, impediment syndrome is also known as bi syndrome. This name is given to conditions characterized by chronic pain and stiffness, for example, arthritis. Using cannabis as a treatment for bi syndrome is supported by modern research on the anti-inflammatory effects of cannabinoids.

Around that time, another famous Chinese physician, Sun Simiao (581–683 AD) suggested cannabis use to treat pain. He recommended crushing the leaves to extract their juice as a treatment for severe pain due to bone fractures.

Another record of cannabis in the treatment of pain comes from Su Song’s Illustrated Classic of Materia Medica. This book was printed in 1070 CE. Su Song recommends cannabis seed wine for the treatment of pain. He states that “by ten servings the suffering will be alleviated; (and that) its effect cannot be surpassed.”

The psychoactive properties of marijuana were recognized as early as the first century. Throughout history, there have been several mentions of marijuana being used to treat mental illness. The earliest of these is in Sun Simiao’s Formulas Worth a Thousand Gold, written during the seventh century. Here he recommends cannabis for “wind-withdrawal.” Wind-withdrawal was a category of mental illness in Chinese medicine characterized by depression and a desire to be alone.

Later texts from the 20th century, which mention cannabis for mental illness, include Li Chenghu’s Pharmacognosy and Yang Huating’s Illustrated Analysis of Medicines. These books list a wide range of conditions for which marijuana may be helpful, including agitation, hysteria, mania-withdrawal, and insomnia.

There is some overlap here with the current uses of CBD for mental health issues. Some of these uses include CBD for anxiety, Obsessive-Compulsive Disorder (OCD), and Post-Traumatic Stress Disorder (PTSD).

Cannabis for Seizures in Chinese Medicine

In Chinese medicine, wind covers a broad category of conditions, including itching, muscle spasms, tics, tremors, and seizures. This particular application is interesting as researchers are now studying cannabinoids for the treatment of epilepsy.

Hemp continues to be grown across many parts of the country and is farmed for its fibers. However, other strains of marijuana are now illegal in China. The only part of the plant currently used in traditional medicine is the seeds, known as Huo Ma Ren. These are crushed and boiled, with the resulting liquid being drunk as a treatment for constipation.

Many of the traditional uses of cannabis in Chinese medicine have now been put aside. However, more and more people are starting to accept the medicinal use of cannabis and its derivatives. There is an ever-growing body of evidence for its potential to help with a wide range of conditions.

Chinese Medicine and the Endocannabinoid System

These phytocannabinoids found in the cannabis plant interact with the ECS by binding to these receptors. The endocannabinoid system modulates several functions in the human body and helps to maintain a state of homeostasis.

In ancient China, physicians were completely unaware of the endocannabinoid system. However, the idea of maintaining harmony within the body and mind is central to Chinese medicine. The delicate balance between yin and yang, cold and warmth, rest and activity, etc., is considered crucial for good health.

Final Thoughts on How Cannabis Is Used in Traditional Chinese Medicine.

Cannabis is a plant that has been used as a medicine for thousands of years. Its uses are wide and varied, including CBD for pain relief, anesthesia, and treatment of mental illness, seizures, and spasms.

In modern-day China, its use in traditional medicine is currently limited to the seeds which have a laxative effect. However, medical marijuana and CBD products are becoming increasingly popular across the globe. There is a wealth of research emerging that appears to support their beneficial effects.