The Internet has unquestionably resulted in many incredible things. This includes the ability to discover an extraordinary amount of information that previous generations could only dream of. We believe it has probably helped hasten the legalization of weed in various states. Now, real data has become available. As a result, more people than ever realize that much of the anti-marijuana propaganda published is deeply flawed.

The Internet age has also helped publicize new sports and hobbies, with extreme sports among the biggest beneficiaries. One weed-related activity that is on the verge of going ‘mainstream’ is competitive joint rolling.

What Is Competitive Joint Rolling?

You may assume it has to do with rolling a joint the fastest. In reality, it is an activity that involves rolling the most ‘creative’ joints! There is even a National Joint League (NJL). It is an Instagram based competition which seeks to find the most creative joint rollers in the world. It places the best rollers in the league against one another in head-to-head competitions. At present, it has over 60,000 Instagram followers.

Tournaments generally feature 16 entrants who face one another in a series of knockout rounds until there is only one winner.

If you go to the NJL website, it has a section with links to the Instagram accounts of its ‘Pro Rollers.’ They include @thegrasshoppa, @az_dabking, and @lukekmk. For the average person, rolling a joint is not an easy task. It is only something you can perfect with practice. There are even special machines created for the job. However, competitive joint rollers can produce some pretty incredible works of art.

Who Is the Highest Roller?

Although it is a relatively new field, Tony Greenhand has already emerged as the King of the Joint Rollers. Greenhand is appropriately named and is a genuine weed lover. We can only imagine how happy he is to make a living doing something he loves. According to Greenhand, he jumps out of bed, has some coffee, and starts rolling joints! 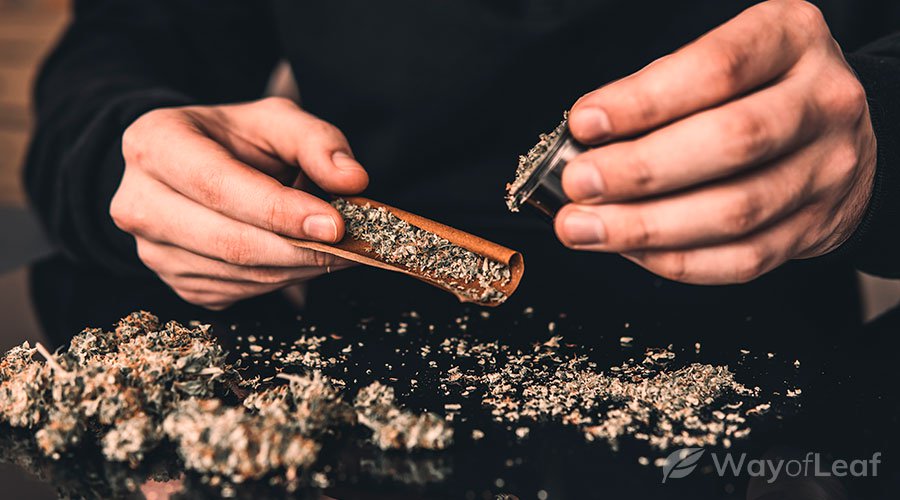 He is a humble, amiable young man. Greenhand admits that the notion of being the world’s best joint roller is ridiculous. Even so, he has a ‘gift’ which is being embraced by social media. The incredible 4.2-pound ‘watermelon’ created by Greenhand in 2016, burned for over three hours!

One look at some of his creations, and it is clear that Greenhand is creating smokable works of art. Among his most memorable joints include an AK-47 and a devil playing the violin.

The AK-47 is a fully smokable sculpture containing a whopping eight ounces of cannabis. It took him an incredible 40 hours to complete it, along with a 1.5-ounce Glock and a grenade. He created the Weapons Collection for a wealthy ‘friend of a friend’ who paid $7,000. $175 an hour is a rate we could all live with!

Fortunately for Greenhand, he lives in Albany, Oregon, a state where cannabis is legal recreationally. On the other hand, his mother works as a clerk in the local police department and hates what he does! He admits that his business is almost entirely dependent on social media. It is easy for people to find him and place an order. At the time of writing, he has over 382,000 Instagram followers. His ultimate goal is to create a smokable joint equal to his body weight in weed.

What Does the Future Hold for Competitive Joint Rolling?

One wonders how long Greenhand can hold on to his crown. He has helped inspire thousands of joint rollers worldwide. Other organizations will certainly spring out from beneath the shadow of the NJL.

One area that is open to improvement is the number of female rollers. Dawn Doan was the only female member of the NJL at the beginning. Like Greenhand, Doan has turned her talent into a means of earning a living. She earns between $30 and $50 per hour for commissions. Among her best creations to date include a Wall-E Robot replica and a fully functional crossbow.

The growth of competitive joint-rolling means that satirists can fool readers into believing it will become a real sport.

One spoof website wrote an article on how rolling joints would become a competitive sport by 2023. They gave the game away in the first line by suggesting the announcement came from an entity called the American Sports Society, or ASS for short!

It may never become an actual ‘sport.’ However, there is an excellent chance that competitive joint-rolling will become a popular endeavor and a lucrative one for its best proponents. It is considered a serious skill and is gaining traction as more than a mere hobby. Joint rolling is taken pretty seriously these days, with YouTube tutorials, expensive devices, and 200+ page guides on the subject.

Apparently, rap star Waka Flocka Flame has a full-time joint roller who gets paid approximately $50,000 a year. Joint rolling is no longer only a means to get stoned. It has become an art form. Talented artists recreate famous landmarks such as the Eiffel Tower and cartoon characters such as Pokémon.

They can spend up to 40 hours, the equivalent of a workweek, to complete one project. As the money for joint-art increases, we expect these rollers to spend hundreds of hours crafting projects that belong in a museum. The National Joint League is only the start. We expect competitive joint-rolling to grow in stature as more states legalize marijuana.

What Is a Weed Delivery Service & Should You Be Starting One?

It's not just for lazy people...