Medical marijuana is legal in Florida, thanks to the Florida Medical Marijuana Legalization Initiative. Almost 72% voted ‘yes’ to the initiative, which appeared as Amendment 2 on the ballot in November 2016. Most Floridians assumed they could obtain traditional medical cannabis flower. Not unreasonably, they also believed they could smoke it in the form of joints, pipes, etc.

However, upon implementation of the Amendment in 2017, the Florida Department of Health (DOH) banned all smokable forms of cannabis. Weed was legal, but MMJ cardholders could only use it in the form of vape oils, edibles, and topical creams.

Florida residents were both shocked and angry. The DOH added supplemental language to the constitutional Amendment. This was AFTER its approval by the state’s voters.

Fortunately, prominent Florida attorney John Morgan spotted the misleading actions of the DOH. He helped file a lawsuit against the state in July 2017. According to Morgan, the state’s restrictions against smokable marijuana went against the original wording outlined in the constitution’s Amendment. Incidentally, Morgan also bankrolled the Medical Cannabis Initiative before 2016.

According to Section C6 of Amendment 2:

“This section makes clear that the Amendment does not require that the smoking of marijuana be allowed in public, unlike the proper use of medical marijuana in a private place which is not illegal.”

There was nothing in the language of the Amendment that implied the prohibition of smoked marijuana. At that time, the question was: “Is smokable marijuana allowed in Florida for medical patients?”

Are Medical Patients Allowed to Smoke Marijuana in Florida?

The answer is now ‘yes,’ much to the delight of medical marijuana patients all over Florida. In May 2018, State Circuit Judge Karen Gievers ruled in favor of smoking cannabis. She said that it went against the language in Amendment 2. The judge went on to say the ban was “unconstitutionally inconsistent with voters’ intent.” 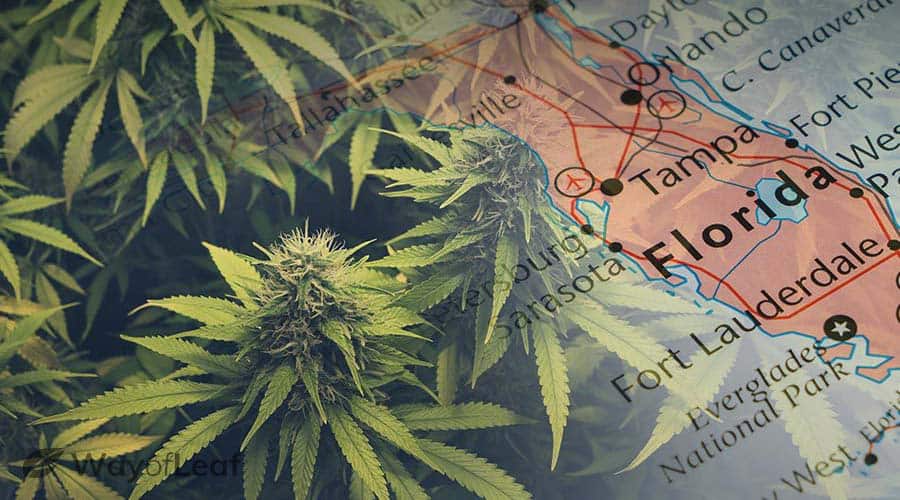 Florida governor Rick Scott appealed the ruling within 10 minutes of the judge’s decision. As a result, it went to an appeals court in Tallahassee. Scott’s rapid-fire appeal prompted a sharp response from Mr. Morgan. On Twitter, he reminded the Senator that “[You are] the Department of Health, this is [your] case … Don’t be like the others… grow some brass ones!”

Fortunately, Scott’s time as governor came to an end in January 2019 before the appeals court heard the case. His successor, Ron DeSantis, dropped the appeal and asked the legislature to remove the restriction.

DeSantis signed a bill into law (SB 182) that lifted the marijuana smoking ban in March 2019.

SB 182 permits MMJ patients aged 18+ to use 2.5 ounces of cannabis flower every 35 days. Patients under the age of 18 can only use smokable marijuana if they have a terminal illness, and a second opinion from a pediatrician. Also, patients must sign an informed consent form acknowledging the health risks of smoking weed. The move came after marijuana advocacy groups successfully argued that concentrates might not prove effective for all patients.

Marijuana Flower in Florida Dispensaries: You Can Get It if You Really Want It

Before DeSantis’ common-sense move, the fledgling MMJ program in Florida was a mess. It took several years and failed legalization attempts before cannabis advocates in the state had their way. The state has had an interesting marijuana history. In October 1933, Victor Licata murdered his sister, two brothers, and both parents with an ax while they were asleep.

The Chief of the Tampa Police Department placed the blame on cannabis. Medical records later revealed that Licata had a history of mental illness. It is highly unlikely that his marijuana use contributed to the slaughter. Nonetheless, the incident was another weapon used by Harry Anslinger and co. Four years later, the Marihuana Tax Act effectively prohibited weed in the United States.

The case of Rudy Eugene, almost 80 years later, showed that times had changed. In May 2012, Eugene attacked a homeless man named Ronald Poppo in Miami. Known as the ‘Causeway Cannibal,’ Eugene’s car broke down, and he abandoned it. He was naked by the time he came across Poppo. The ‘Miami Zombie’ attacked Poppo and started eating his face.

The police arrived and shot Eugene five times. Toxicology reports showed that the attacker had marijuana in his system. Unlike in the 1930s, there was no public outcry against cannabis. A year after the attack, a poll showed that 60% of Miami residents were in favor of marijuana legalization!

Florida legalized CBD oil after Governor Scott signed Senate Bill 1030 into law in June 2014. The Compassionate Medical Cannabis Act allowed the use of high-CBD, low-THC cannabis oil. The oil came from the Charlotte’s Web strain. You could only use it legally if you had ALS, cancer, or epilepsy.

Amendment 2, legislation for a more far-reaching MMJ program, failed in January 2014. Although 57% of voters said ‘yes,’ Florida state law requires a supermajority of 60% for constitutional amendments. John Morgan spent $4 million in his support of the campaign. However, casino owner Sheldon Adelson spent $5.5 million in his battle against it.

The reprieve for Adelson and his cohorts was short-lived. Florida residents voted overwhelmingly in favor of Amendment 2 in November 2018.

Under the law, a patient can access medical marijuana if the doctor believes the benefits of it outweigh the risks.

The MMJ program began poorly. 93,000 people had applied by April 2018, but over 30,000 were still waiting for MMJ cards. The ban on smoking marijuana fiasco also caused much consternation. It didn’t stop licensed Florida dispensaries from selling marijuana flower, albeit in a ‘proprietary’ format that is unrecognizable to most. Trulieve, for example, offered a range of products called ‘TruFlower Cups.’

Thankfully, the change to the law means that MMJ patients are no longer restricted. However, the City of Miami Beach banned smoking marijuana in public. This includes a prohibition on smoking weed in beaches and parks. In November 2019, Senator Joe Gruters introduced SB 670. If it passed into law, it would have banned smoking and vaping of all kinds in all Florida state parks. However, the bill died in the Senate in March 2020.

Final Thoughts: What Is the Future of Marijuana in Florida?

Although Floridian MMJ patients can smoke weed, they can also use vaporizable oils, oral tinctures, or infused topical lotions.

However, if you decide to smoke marijuana, please note the potential health risks that are involved with combustion. It is also challenging to measure dosage when you use smokable cannabis.

There is a drive to legalize recreational marijuana in Florida. A cannabis rights group named Make It Legal Florida is working hard to get it done. It tried circulating a petition to add a recreational marijuana amendment to the state constitution in 2020. Remember, it takes 60% to pass according to Florida state law.

The group needed 766,200 signatures, and by January 2020, it had over 700,000. Make It Legal Florida filed a lawsuit in a bid to get more time. The group said that a law passed during the 2019 legislative session violated constitutional rights. However, it abandoned its attempts in January 2020 as it became clear it would fall just short. Also, there was strong opposition from Ashley Moody, the state’s Attorney General.

It now seems likely that Florida will need to wait until 2022, at least for a chance to legalize cannabis recreationally. At present, possession of 20 grams or less is a misdemeanor. It carries a possible prison term of one year! The only way to legally acquire cannabis in Florida is through the MMJ program. At least it is now legal for qualified patients to light a joint!