A recent estimate suggests that up to 80% of the global population relies on herbal medicine. This can be via specialized herbalists or informal community networks. For some people, cannabis falls under the “herbal medicine” banner. It is another means of helping the body without the use of lab-developed pharmaceuticals.

This article compares marijuana to five of the most popular herbal remedies on the market. We compare and contrast the substances, so you can decide which one best suits your needs. We also investigate the side effects associated with each one.

What Is an Herbal Remedy?

Simply put, an herbal remedy is a plant used as a medicine. People use them in the belief that these plants can prevent or cure a disease. Unlike the medicines you get from the pharmacy, herbal remedies are not rigorously tested. They are also unregulated.

Most medical communities respect herbal remedies but are quick to point out they are not medicines. They’ll also point out that just because something comes from nature doesn’t mean it’s safe! 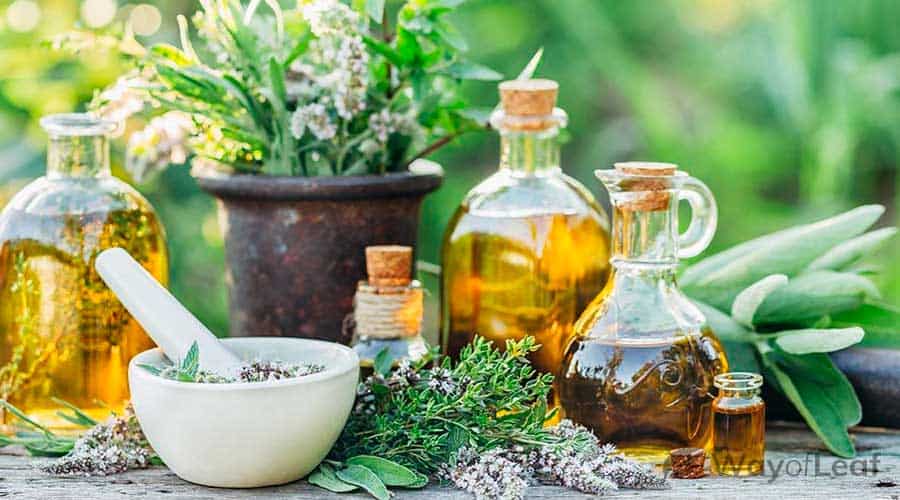 Still, there is ample research looking into why people use herbal medicine. One example is this study, wherein researchers found that the main reason for using herbals is to treat illnesses. Individuals who tried herbal treatment did so mainly because of dissatisfaction with conventional medicine or positive experiences with herbs in the past.

Another study looked at herbal remedy usage in Jordan. Over 80% of the invited participants used herbal medicine. Of those who didn’t use them, over 52% said they believed herbal remedies were ineffective.

In general, an herbalist uses plant extracts via teas and distillations. The suggestion is that this form of herbal remedy is effective for moderate illnesses and poses fewer side effects than other forms of preparation.

Even in many Western nations, herbal medicine was the main form of healthcare for all but the last 50-100 years. Approximately 25% of all pharmaceutical medicines are plant-derived.

How Cannabis Compares to an Herbal Remedy

The cannabis plant grows in nature, and people use it for medical reasons. Therefore, we can technically refer to marijuana as an herbal remedy.

What is potentially different is that there’s more research on cannabis than practically any other herbal remedy. Eventually, MMJ could become an herbal medicine if it hasn’t already done so. An herbal medicine must follow the regulations for medicines when presented to prevent or treat diseases in humans.

Sativex is a cannabis-based medicine that ticks these boxes and has received FDA approval. Epidiolex contains CBD and has also received the coveted approval of the FDA.

In contrast, sellers can’t claim that an herbal health product has a medicinal effect. Instead, they can only make general claims such as ‘helping to feel better’ or ‘managing chronic pain symptoms.’

While MMJ isn’t federally legal in the United States, it is legal in Canada and Uruguay. Therefore, one could argue that cannabis has already achieved herbal medicine status in these countries.

Now, let’s check out how a handful of popular remedies compare to marijuana.

Five of the Most Popular Herbal Remedies

Ginger or Gingerols is a flowering plant that has been used for thousands of years as both an herbal remedy and a cooking ingredient. Originating from South East Asia, it is well-researched as an herbal remedy for pain.

Although the evidence is somewhat inconsistent, one study showed that osteoarthritis patients experienced benefits equal to diclofenac (a popular anti-inflammatory drug). It may also be useful for musculoskeletal and rheumatic pain. Another study also revealed that ginger extract consumption could reduce pain in patients suffering from osteoarthritis of the knee.

Ginger ranks so highly because it’s so readily available and causes little in the way of side effects. Try adding ginger to your everyday meals or brewing yourself a cup of soothing ginger tea. Here are other possible benefits of ginger:

Ginseng is a tonic from the plant of the same name, which is native to Asia and North America. Famed for its ability to relax the mind and improve various bodily functions, Ginseng usage goes back centuries. Below are some of the key benefits of this herbal remedy:

Turmeric has been a staple of Chinese and Indian traditional medicine for thousands of years. It is closely related to ginger and contains the active compound curcumin. Curcumin is known for its potent anti-inflammatory effects and is well-studied as an herbal remedy for pain.

Curcumin may cause mild stomach upsets when taken in high doses. However, it should be safe to add to your everyday meals. Try taking turmeric alongside a small amount of healthy fat and some black pepper to boost its absorption. Black pepper may increase curcumin’s bioavailability by as much as 2000%! Here are some of this herbal remedy’s other benefits:

Chamomile has been used as an herbal infusion and medicinal product for a very long time. It is from the Asteraceae plant family and offers a wide range of benefits. Here are some of its possible benefits:

Ginkgo Biloba is a Chinese tree that has been used in the West for centuries. Proponents say it is excellent for helping with concentration, memory, and other mental and physical conditions. Here are some of its potential benefits:

Tips for the Safe Use of Herbal Remedies

Overall, we advise you to do the following before choosing herbal remedies:

How Does Cannabis Compare in Providing Possible Health Benefits?

The thousands of studies conducted to date suggest that cannabis could provide similar benefits to all of the herbal remedies mentioned above. Let’s analyze a few of the most pertinent.

Many people opt for cannabis to help with a variety of pains, including headache and migraine pain. A study published in 2010 looked at the effect of cannabis on our endocannabinoid system regarding migraine pain. It found that the ECS is peripherally and centrally involved in processing pain, and cannabinoid usage could help manage pain.

Cannabis has possible anti-inflammatory properties. There are dozens of studies that outline how marijuana has helped patients with inflammation and pain.

A study published in 2010 looked at cannabis and dementia. The researchers found that there were a variety of therapeutic benefits to the plant in neurodegenerative diseases.

Another study, published in 2020, concluded that non-intoxicating cannabinoids like CBD could help manage the symptoms of Alzheimer’s and Parkinson’s conditions.

Perhaps one of the best-known uses of cannabis is to reduce anxiety and stress. A significant number of studies show benefits for patients with anxiety, post-traumatic stress disorder, and depression.

Many people have claimed that cannabis has improved their sex lives. Certain strains could reduce anxiety around sex, decrease pain and improve sensitivity and overall enjoyment. Studies also suggest that marijuana could result in better orgasms and increased sex drive.

A study published in 2013 looked at how cannabis impacted memory. The researchers found that particular strains of cannabis could impair OR improve memory. Those seeking improved focus and memory would benefit from cannabis with a high CBD and low THC content.

Are There Any Side Effects of Herbal Remedies & Cannabis?

Despite the benefits of cannabis and herbal remedies, it is incorrect to maintain that ‘natural’ means ‘safe.’ There is the potential for adverse effects, which we outline below.

Certain herbal remedies could prove toxic at high doses or interact with medications unless taken specifically as directed. Let’s check out some side effects associated with some well-known herbal remedies:

While ginger is generally safe, it could interact with blood thinners. Meanwhile, the turmeric and black pepper combination can result in an upset stomach in high doses.

In legal MMJ markets, customers have better protection against subpar products due to regulation. However, marijuana itself is associated with various side effects. One study found that cannabis can interfere with cognitive function.

More concerningly, the researchers also determined that repeated use during adolescence could cause long-lasting changes in brain function, which might negatively impact the user’s social, professional, and educational achievements.

Final Thoughts on Cannabis as an Herbal Remedy

The evidence to date suggests that marijuana has a huge array of possible benefits. Indeed, it seems to have the combined abilities of several well-known herbal remedies.

However, at present, it is only fully legal in two countries around the world. In the United States, it is used in dozens of states with medical marijuana programs. However, dispensaries are not permitted to say it treats, cures, or prevents any disease.

Both herbal remedies and cannabis have potential adverse side effects. The list associated with marijuana is longer, but it does benefit from being in a regulated market in places where it is legal.

Whether you use cannabis or an herbal remedy, make sure you discuss your usage with a physician. This is especially the case if you’re currently using ‘traditional’ medication since it could interact with marijuana or one of many herbal remedies.

9
8 min read
Join The Discussion
TOC
Premium
Your subscription has ended
If you love cannabis and want to support our site, join WayofLeaf Premium today and unlock
Best of all, part of your membership fee will go towards supporting the fight to legalize cannabis.
Sign Up for WoL Premium
Not now
I already have an account
×
Log in to Your Premium Account