Marijuana is legal recreationally and medicinally in Oregon. The state was one of the first to implement an MMJ program in 1998. Then, in 2014, Oregon residents voted to legalize cannabis in the state fully. However, since adult-use cannabis went on sale, it has struggled to create a balanced market. Supply significantly outstripped demand until very recently.

As you can imagine, there is an immense level of competition amongst marijuana dispensaries in Oregon. The state is #1 for dispensary density with 16.5 per 100,000 inhabitants. This figure suggests that there are close to 700 licensed dispensaries in the state.

The cities of Medford, Eugene, Portland, Salem, and Bend have the most dispensaries, but do they have the best? This article helps narrow down a huge field and recommends the five best dispensaries in Oregon.

The Nectar chain has dispensaries dotted all over the state. Its Portland store is well-regarded, but the Gresham location is arguably even better. It is open seven days a week from 7 am until 10 pm.

Nectar first opened in 2013, and the brand claims its customer-first approach is what keeps it at the top.

Nectar first opened in 2013, and the brand claims its customer-first approach is what keeps it at the top. It also suggests that it is the largest recreational cannabis dispensary chain in Oregon.

Like all Nectar locations, the Gresham outlet has a vast expanse of cannabis products and accessories. It has knowledgeable and patient budtenders and an incredible variety of items. The brand also performs extremely detailed testing to ensure there is no mold or pesticides in products.

This is the oldest marijuana dispensary in Portland, having been established in 2010. It is a family-owned business that serves three locations: Richmond, Buckman, and Sellwood.

It prides itself on supporting local businesses. As a result, it features products from local marijuana brands such as New Kind, Bob Sled, and Verdant. Once again, this is a dispensary famed for its helpful staff and the fact it submits all products to third-party testing.

All you need to know about MMj…

The range of products varies according to the location. However, you can purchase pre-rolled joints with 0.5g of cannabis for just $5. If you’re after vaping products, Brothers has you covered. One of its most popular products is a distillate that’s 30% THC and 43% CBD! At $20 for a gram, it is outstanding value.

This brand has become legendary in the city of Beaverton. It was the city’s first dispensary and remains the favorite place for locals to buy their cannabis. It opens a little later than a lot of places but remains open seven days a week. 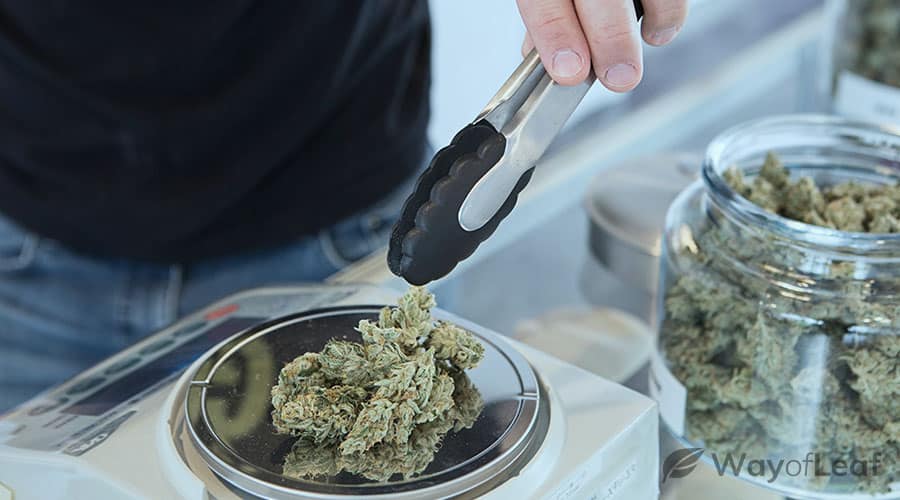 In difficult times, the brand stepped up by offering curbside delivery. At the time of writing, Growing ReLeaf offers well over 500 products. Its cannabis flower is extremely reasonably priced; you can get strains such as Allen Wrench for less than $7 a gram.

Those looking for the strongest marijuana can avail themselves of THC concentrates at outstanding prices. A prime example is its Korova Dab in caramel cream. It contains over 72% THC yet costs less than $17 a gram.

This chain has several locations dotted throughout the state. However, it is the Firehouse 23 location that remains the most enduring. It was the first MMJ dispensary in Oregon, which makes it the oldest in the entire state. It isn’t every day that you have the opportunity to shop for cannabis in an old fire station!

It was the first MMJ dispensary in Oregon, which makes it the oldest in the entire state.

Getting your marijuana here is a genuinely unique experience. You need to enter through huge doors and pass a fire pole to get to the reception area. The brand has grown in time, although its Portland location still attracts the greatest number of customers. The Firehouse 23 location’s other claim to fame was its appearance in a TV show called Here and Now.

You can order online these days, and each of its dispensaries has a different menu. The Firestation 23 location has an impressive array of goodies. We have a particular liking for its edibles section. It includes treats such as dark chocolate raspberry bars and pineapple-infused honey. Some of these edibles are extremely high in THC, so use them sensibly!

This delightful dispensary is located in the art-lovers Pearl District of Portland. A group of chilled-out guys from the Oregon recreational scene decided to create a dispensary that’s slightly different from what was on offer. The result is a place where the combination of high-quality products and a unique vibe made it a neighborhood favorite within months of opening.

Related article
Dispensary Marijuana Versus Growing Your Own

We look at the pros and cons…

Although it is something of an artist’s hangout, Virtue is a dispensary that can poke fun at itself. Founded in August 2017, Virtue’s reputation has grown, and its collection of art is a genuine highlight of any visit.

Of course, its cannabis product selection isn’t too shabby either. It offers pre-rolls with 0.5 grams of weed for just $4. If you’re an experienced user, you’ll enjoy the range of high-THC products such as moonrocks that are on display.

Final Thoughts on the Best Marijuana Dispensaries in Oregon

Residents of Oregon who enjoy using cannabis are extremely fortunate. They have access to an incredible array of high-quality dispensaries. If you live in an urban area, you’re probably no more than a few minutes away from one. We honestly found it hard to narrow down the list of best dispensaries because there are so many options.

In most cases, you can order online and pick up your product at the dispensary. Some companies now offer curbside pickup. One thing you won’t lack is choice! The range of marijuana products on offer is incredible. If you have a favorite Oregon dispensary that isn’t on the list, let us know in the comments.