Let’s face it; getting high has long been associated with eating the contents of your kitchen and watching good movies. One of the few cannabis stereotypes we can get behind is binge-watching TV when high, but what are the best shows out there to accompany your favorite bud?

Stoner movies may as well be a genre of their own, and with the rise in the popularity of cannabis, we felt now was as good a time as any to share with you some our top picks. So whether Netflix is your bag or you prefer a DVD box set, today let’s explore ten of the best series to watch while high!

Why Watching TV While High Is the Best 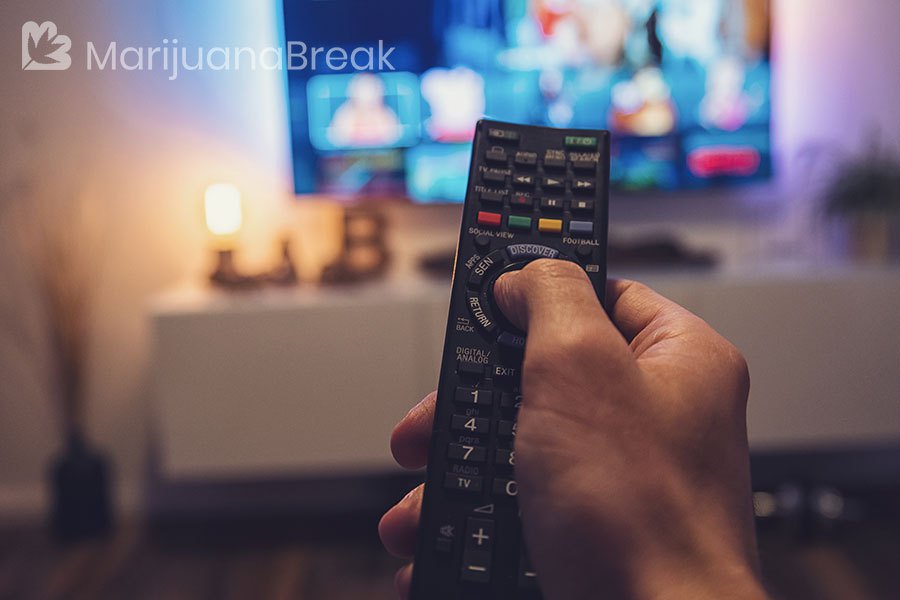 We may be a little biased here, as we do love to get high, but it is hard to argue against the adage that everything is better when stoned. One such activity that has never gotten old is watching TV and movies when enjoying a big old joint of your finest marijuana, and here is why…

Depending on your mood, watching a great show or film can engage your brain, evoke a range of emotions, and be visually pleasing to boot! When viewing a show or movie when HIGH, everything is improved tenfold!

Fancy hiding behind your hands with a terrifying horror, laughing with mates to a comedy or snuggling up to a romcom? Doing so when high can take a great watch and make it EPIC, not to mention that movie and show snacks take on a whole new level of deliciousness when stoned, too!

You will see from our list that today that no genre is better than the next, and the right bud can marry up to a particular strain perfectly to make for one hell of an experience.

Stay tuned for our top ten series to get high to!

If you have never seen one of David Attenborough’s documentaries before, then you are seriously missing out! High or not, the visuals alone are enough to blow your mind, but when you add cannabis into the mix, this series takes on a whole new appeal.

Planet Earth is a wildlife documentary that offers an edge of seat footage of all your favorite animals. Gripping, tense and emotionally raw, you will not want to miss the visually stunning show, and there are two series, so you don’t need to move for anything but the snacks!

Warning: We cannot be responsible for the emotional turmoil you may go through during Planet Earth when high!

Yes, yes this is probably a predictable one to include, but it’s undeniably one of the best series out there for opening up about the subject of weed. Breaking Bad-esque, this show follows the personal struggles of a widower across eight series as she battles with her morals and ethics.

Hilarious, poignant, and entertaining as hell, this show will make you want to get high while you laugh along to the comical slip-ups, but more than that it makes an interesting look at the ins and outs of growing and selling marijuana in the states.

Warning: We take no responsibility for the frustration you may feel as a result of the annoying characters in this show!

We think this one probably doesn’t require much of a description, but if you have been living under a rock and have somehow never seen any of the 282 episodes (and counting), Hell’s Kitchen is the cooking competition with a big difference!

Think Master Chef, but with much more swearing! Hosted by Gordon Ramsay, the famous UK chef known for his unsavory language choices, this is a fiery, tense and straight up hilarious cooking show.

What do you want more when you’re high than to be entertained and look at great food? Hell’s Kitchen offers the lot, with a great amount of effing throughout! This is an award-winning show, and we can see why.

Warning: This is not for the faint-hearted; there is A LOT of swearing.

Hit US adaptation of the (less hilarious) UK Office, this is the documentary-style series following the mundane goings-on of a regular office in America. Led up by the legend that is Steve Carell, this is a hilarious watch – particularly if you’re half baked!

Incredibly relatable, we would put money on you identifying at least one character from your workplace in this show, and it is the perfect option for mindless stoned viewing!

Warning: A definite bonus here is that there are tonnes of episodes, but you may end up losing an entire weekend binging out!

Love conspiracy theories and a bit of history? Then America’s Book of Secrets will make the perfect watch for you and your mates when you are having one of those long weekends indoors.

Enjoy a smoke as you unravel some of America’s best-kept secrets, from the FBI to Area 51, this is a corny, yet fascinating watch that will blow your tiny high mind!

If you don’t like to take life too seriously when you’re high, Adventure Time is a perfect choice. Very weird, and even more hilarious, this is the U.S. animated show which is meant for kids, but kind of shouldn’t be!

We can’t say for sure, but this show was almost certainly created with stoners in mind, from the trippy visuals to the disturbing scenes, this is a gross, silly and entertaining watch for both kids and adults alike.

Warning: If you are on a psychedelic high, we can’t be responsible for what this show may look like to you!

Sort of a spin-off from the previously mentioned Office, Parks and Recreation have built up a sort of cult following in recent years for its awesome characters and hilarious plot.

Super easy to watch in the same way as The Office, this requires minimal effort on your part but offers plenty of laughs. The characters are super loveable, and you will have a bond with each one of them by the end, especially if you are THAT kind of high person!

Warning: This is SUPER easy watching and can lead to mindless munching – be warned!

This was voted the most watched show of 2017, and we can see why! If you a love a good who-done-it, and aren’t easily offended, then this true crime mockumentary will be the perfect stoner series!

Following the mystery of the appearing phallic symbols, the show is set in a high-school, and is pretty low-key hilarious as we see staff and other individuals interviewed as more and more dicks are appearing.

Stupid, but addictive, all you will want to know is who is drawing the penis shapes, and why?!

Warning: Not to be taken too seriously, this is a laugh out loud documentary-style series.

If you are partial to a sweet treat when you’re high, GBBO will be your perfect show! Exceedingly British and extremely mouth-watering, this is another cooking competition show, but this time it is all about the art of baking!

Combine the drama of competition with the stress of a busy kitchen, and you are bound to get some baking disasters, and this show is full of them! Offering humor, some impressive masterpieces and a lot of tears, this is a deliciously addictive show that will see you stuffing the closest cupcake into your mouth with haste.

Warning: We cannot stress enough how amazing some of the food on this show is, so have your cupboards well stocked!

#10 The Haunting of Hill House

We had to have at least one dark and spooky show on offer, and Haunting of Hill House is the newest Netflix show to cause a stir amongst viewers for its creepy vibes!

Not for the wimpy stoner, this is full of mystery, frightful characters and jumpscares that will either make for a super tense but interesting high, or will see you switching the TV off for eternity!

Warning: Seriously scary, don’t pick a high-THC strain if you want ever to sleep again!

Round-Up: What’s Your Go-To Viewing for a High Weekend?

That’s it, folks, our current top ten shows to watch when getting baked! We are an eclectic bunch and think this list has something to offer even the fussiest stoner, but what we would love to know is what your favorite show is when getting high?

Let us know your recommendations down in the comments!