We may have reached a tipping point in favor of cannabis legalization. A Pew Poll from November 2019 showed that 67% of Americans are in favor of legalized marijuana. Also, its use is permitted in 33 states plus Washington, D.C. at present. Several other states are likely to follow suit within the next couple of years.

We also live in an era where celebrities seemingly have the power to change consumer behavior on a grand scale. The fact that so many of them have got behind the cannabis cause has undoubtedly helped its popularity.

We’re already aware of famous stoners like Willie Nelson and Tommy Chong. However, there is a new generation of celebrities that enjoy marijuana. Some of them are rather open about their usage too. In this article, we celebrate the ‘new breed’ of celebrity marijuana users.

No celeb stoners list is complete without the famous Snoop Dogg. He openly advocates the consumption of cannabis and isn’t shy about his love of the herb. Snoop Dogg is also a major part of the industry and earns a fortune from his brand, Leafs by Snoop. Indeed, a recent Green Horizons report found that Leafs by Snoop is the most recognizable cannabis brand in America.

Snoop is a man who knows how to manage his finances. He has widely invested some of his fortune into the marijuana market.

It is an industry set for exponential growth in the next decade. Despite his wealth, Snoop continues to earn in any way he can. This includes starring in some unusual adverts for Just Eat. Without a doubt, Snoop knows how to drop it like it’s hot.

It is no surprise that Miley Cyrus has made this list. Her frequent consumption of cannabis is no secret to her inner circle or the media. In 2017, she threw a marijuana-themed joint birthday party for her then-boyfriend, Liam Hemsworth, and her younger sister, Noah.

Apparently, her mother helped Miley decide to throw the memorable birthday bash. It is alleged that other members of the Cyrus clan also use cannabis. 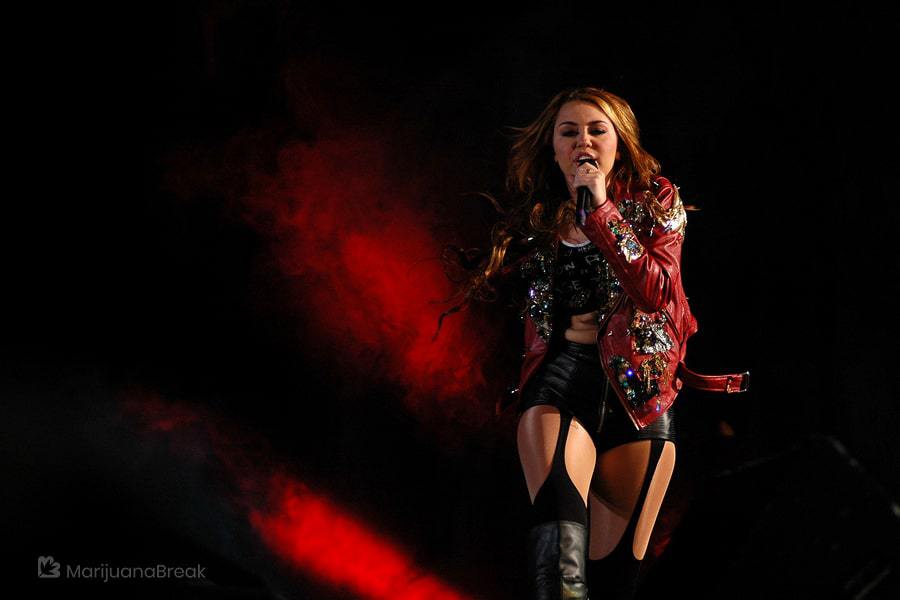 Cyrus claimed that she quit smoking marijuana years ago. However, some media reports suggest she is using it once again.

Miley once said that cannabis was her “first and true love.” Who can relate? As for her relationship with Hemsworth, the couple got married. Sadly, they were divorced in under a year.

She was against the consumption of cannabis in her teenage years. However, Bella Thorne has become an advocate and regular user of the medicinal plant. She claims it helped her de-stress and sleep better at night. Her usage perhaps came after taking on an emotionally challenging role that drained her mentally.

Bella Thorne has certainly wiped away any remnants of her squeaky-clean Disney persona. She doesn’t just promote marijuana; she also collaborates with controversial rappers and musicians.

SNL comedian Pete Davidson has opened up in the last couple of years. He is open about his extremely frequent cannabis consumption. Davidson seemingly enjoys getting high but also has borderline personality disorder.

He has struggled with BPD for years and claims that marijuana helps him manage the condition and stay well-balanced. Davidson gained additional fame due to his relationship with pop singer Ariana Grande. He has turned into one of the newest additions to the list of marijuana-loving celebrities. This is primarily because he is relatively new to the fame game in general.

She is quite possibly one of the most surprising individuals to make this list. However, reports suggest that Kris Jenner, a member of the Kardashian-clan, loves Mary Jane. Viewers have witnessed Kris enjoy a joint on Keeping Up with the Kardashians. There is also evidence of her love of weed in videos of parties she attended.

Related article
Celebrity CBD Brands: Which A-Listers Are Getting In On The Market?

You may be surprised by some o…

Jenner does not deny her adoration of cannabis. She even discussed how she isn’t able to stop herself from laughing endlessly when she smokes weed. Given her profile, the industry would benefit if Kris Jenner promoted cannabis tolerance and open consumption.

JLaw has come a long way since The Hunger Games. The hilariously blunt and funny actress is not shy to admit that she enjoys marijuana. Lawrence once claimed she smoked weed before the Oscars. There are also reports of Lawrence out-smoking former co-stars.

There are further reports of Jennifer Lawrence enjoying a joint or two at Ellen DeGeneres’ 60th birthday party. We like this transparent attitude about cannabis that JLaw possesses – it’s refreshing.

As the daughter of the ultra-famous Michael Jackson, Paris has had the media spotlight since birth. However, it is only in the last few years that her fame has skyrocketed due to her foray into modeling. It is also apparent that she uses cannabis.

She posted Snapchats of herself smoking fat blunts with a mixed response from her fanbase. However, Paris has always responded with grace.

She explains that cannabis isn’t harming anyone. She also believes that those who think it is a harmful drug need to reeducate themselves about marijuana.

Paris Jackson has a history of mental illness and addiction. Perhaps she uses cannabis to avoid plunging into a downward spiral, though we can only speculate. Hopefully, it continues to help her feel better in life.

8. Anne Hathaway: The Dankest Mom Around

During a game called “Plead the Fifth,” at an interview on Watch What Happens Live!, we learned that Anne Hathaway loves marijuana. Alas, people judge her because she is also a mother.

When asked how big of a stoner she was, Hathaway said she wasn’t a little one. Crucially, she chose not to plead the fifth and was instead honest with the audience. Nonetheless, she managed to keep her answer a little bit vague. Certainly, Hathaway is a surprising addition to the list of marijuana lovers if she is, in fact, a member of the club.

9. Lady Gaga: Fighting Pain and Autoimmune with the Help of Mary Jane

Lady Gaga has struggled with debilitating lupus for years. As a result, it isn’t surprising that she would regularly consume cannabis. There is a suggestion that autoimmune disorders are potentially more bearable with the assistance of marijuana.

This lady is gaga for marijuana. The paparazzi have caught her using weed in public on multiple occasions. The actress and singer doesn’t care who knows about her use of weed or what they think. 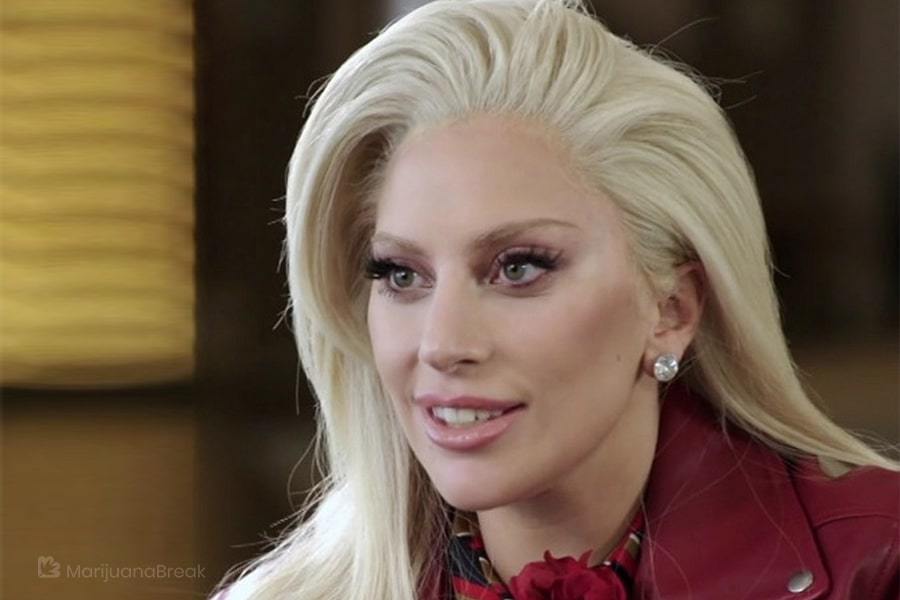 It seems that Lady Gaga is extremely proud of her marijuana use. She claims that it “helped heal the pain” – a statement that many regular marijuana consumers can attest to.

It seems that Gaga’s adoration for ganja is still going strong after many years. She isn’t one to pass up a dank joint. Viewers see this throughout her intriguing documentary Gaga: Five Foot Two.

There is an endless list of celebrities that love cannabis, some of whom have simply not admitted it yet. After all, they’re just humans like everyone else, and plenty of people adore Mary Jane. We hope that this list satiated some of your curiosity regarding famous cannabis users.

Related article
Famous People Who Use Cannabis [#6 Will Surprise You]

Stars who love weed and aren't…

What Is a Weed Delivery Service & Should You Be Starting One?

It's not just for lazy people...

Can a Scientist Gain Access to Marijuana for Research?

9
6 min read
Join the discussion
TOC
Premium
Your subscription has ended
If you love cannabis and appreciate our content, join WayofLeaf Premium today and receive:
Best of all, part of your membership fee will go towards helping to legalize cannabis.
Go Wayofleaf Premium
No thanks, I can't afford it
I already have an account
×
Login in to your premium account