As far as marijuana is concerned, its legal status is confusing for many in the United States. The issue of bringing cannabis on an airplane is a perfect case in point. It is a federally illegal substance like heroin. Consequently, one would assume that carrying it onboard an aircraft is a prohibited act.

Conversely, you may think it is okay as long as you fly from one ‘legal’ marijuana state to another. Neither supposition is accurate as shades of gray continue to cause problems. This article outlines if you can or should bring cannabis on a plane.

Marijuana & Airplanes – The Law in General

Cities own airports. However, the federal government is authorized to operate them, and federal law supersedes state law. It doesn’t matter if you buy your marijuana legally. It becomes an illegal substance from the moment you show a Transportation Security Administration (TSA) agent your boarding pass.

Yet even then, the issue is far from cut and dried. The TSA is tasked with keeping planes and passengers secure. They are far more concerned about finding explosive devices than marijuana. 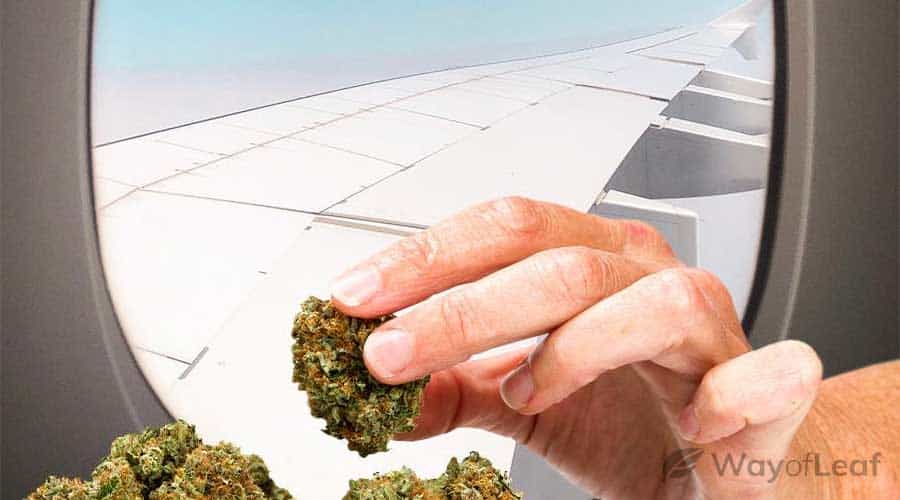 The TSA’s screening procedures mean detecting potential threats. As a result, they are not actively looking for drugs, so you could technically sneak through without a problem. However, the likely outcome is that a TSA agent will find the cannabis and hand you over to airport security.

When an airport security agent gets involved, there are several possible outcomes. Airports such as Aspen-Pitkin County in Colorado or McCarran in Las Vegas, Nevada, have a special ‘amnesty’ box. Passengers can place their cannabis in this box and not face any legal consequences. This is primarily because recreational use is permitted in these states.

If you’re fortunate, a police officer might wave you through with the marijuana if you have a valid MMJ card. However, this is an infrequent occurrence. You are far more likely to meet a law enforcement official who takes a dim view of your actions. While local police may not press charges, the federal government could potentially get involved.

It is a felony to transport ‘for-sale’ weed outside a state according to most states’ laws. It is also a federally illegal act. If you are caught with a large amount, you could spend several years in prison. The majority of cases that end up in court are tried on a state level. This is better news for the defendant because it increases the chances of a favorable outcome.

What About the Legal Marijuana States?

Don’t assume that taking cannabis from one recreationally legal state to another (Colorado to California, for example) is permissible. If a TSA agent finds marijuana or another illegal substance during security screening, the default policy is to contact law enforcement. Your destination and location of origin are not taken into account. The response of the TSA to cannabis at the airport is consistent across the United States.

Don’t assume that taking cannabis from one recreationally legal state to another is permissible.

Will you be arrested in an airport in a recreational state? The answer is: “It depends.” Officials are lenient in certain airports, such as John Wayne Airport in Orange County, California, for example. Therefore, airport police won’t charge you with a crime if you have a state legal amount. You won’t be allowed to bring it onboard, however.

LAX Is Lenient Regarding Marijuana Possession

Cannabis has been legal for recreational use in California since January 1, 2018. On the same day, LAX updated its marijuana policy. According to the airport’s official website, Los Angeles Airport Police Division (LAPD) officers have no jurisdiction to arrest anyone in possession of marijuana. That is, as long as you carry it following state law.

At the time of writing, passengers at LAX are allowed to travel through security with up to 8 grams of concentrated marijuana and 28.5 grams of marijuana flower. The policy also applies to several other airports under APD jurisdiction.

Related article
Can You Cross State Lines with Marijuana? [Here are the FACTS]

It doesn’t mean you can go through security openly carrying cannabis. A TSA agent can stop you and contact the police as per the usual protocols. The difference is that the APD will arrive and wave you through.

Also, you can be arrested for cannabis possession when you land. Alicia Hernandez, a public information officer for the APD, spoke to Rolling Stone magazine a few years ago. She said that the APD “doesn’t concern itself with other state laws or whether travelers will be violating them upon their arrival.” Therefore, please make sure you check marijuana laws at your destination before boarding the plane.

For the most part, law enforcement is not concerned about passengers carrying small amounts of cannabis. Even so, it is very much a case of ‘carry at your own risk.’ If you need it for medical purposes, make sure you have your MMJ card and don’t attract unwanted attention. Make sure there are no liquids in your bag, and there’s a chance that your edibles will go unnoticed.

It is very much a case of ‘carry at your own risk.’

It is a bad idea to try and bring oils or tinctures on board. The mere fact that they are liquid immediately draws attention. Edibles are much harder to detect, especially if you make them yourself and package them like everyday food items. Edibles also have less of a smell. In contrast, you are more likely to get caught if you try to bring cannabis flower through.

If you are caught, don’t object, complain, or get angry with the TSA agent. There is no point trying to talk your way out of the situation. Make sure you display your MMJ card if you have it. There is no real defense for interstate transportation, so stay silent, and ask for an attorney if you get arrested.

Is It Legal to Take Weed on a Plane? Final Thoughts

The issue of whether or not you can bring cannabis on a plane is straightforward if you look at a strictly legal definition. Airports are under federal purview. Marijuana is a federally illegal substance. Therefore, you can’t legally bring marijuana through airport security.

Here is a final recap:

Related article
Can You Travel with CBD? [The Accurate Answer]