For decades, it was assumed that the chemical dopamine was responsible for the ‘high’ associated with marijuana. In reality, the ‘bliss’ molecule anandamide, discovered in 1992, is responsible for us feeling good after taking a hit of weed. It is an endocannabinoid naturally produced by the body, while THC is the most prevalent intoxicating compound in cannabis.

When you consume weed, the THC hits your brain within seconds and has a significant impact on your brain’s neurons. While all marijuana within THC should affect you at some point, the potency of the strain matters when it comes to chasing a lightning-fast high. While the 1960s and 1970s were associated with wide-scale drug-taking, modern-day marijuana is said to be a lot stronger; at least in THC terms.

One study, carried out by ElSohly and colleagues revealed how cannabis has become more potent in recent history. ElSohly et al.’s study involved measuring the cannabinoid profile of cannabis samples which had been seized by the Drug and Enforcement Administration between 1995-2014.

In total, 37,606 cannabis plant material samples were tested using a gas chromatograph with a flame ionization detector method. Of the 37,606 cannabis samples, 11,344 of these were classified as sinsemilla samples. The name sinsemilla comes from the Spanish sin semilla, which means seedless in English.

In relation to cannabis, sinsemilla refers to a growing method where the flowers of female cannabis plants are prevented from coming in contact with the pollen of male plants.

The reason for this is that female cannabis flowers which have not been fertilized produce more resin and develop larger panicles (clusters of branches).

Sinsemilla cannabis also has a much higher THC content; usually at least twice that of a fertilized female plant, but it can be as high as ten times depending on the particular strain and the growing methods employed. The popularity of this growing method, which is believed to have originated in the early 1970s, has led to the cultivation of more potent cannabis with higher THC levels.

Growing methods like the sinsemilla method and the cross-breeding of potent cannabis strains have led to the development of cannabis strains with extremely high THC levels. Some of these strains are extremely fast-acting and hard-hitting. In this article, we look at five such strains. Be warned – these are NOT for newbies!

This sativa-dominant strain (80%) is one of the hardest-hitting ever produced. It was awarded the ‘Most Potent Strain on Earth’ title in 2012 by High Times magazine, and its THC content is approximately 28%. It is a cross of Ghost OG and Neville’s Wreck, so if you suffer from anxiety or are a novice, we can’t recommend Ghost Train Haze because it will knock your head off!

Unless you’re an experienced smoker, a single hit of Ghost Train Haze will leave you thinking ‘what the hell is happening?’ While it provides some of the most pleasurable effects of any marijuana strain, there is a danger that you end up on the floor in a fit of giggles! It is a genuine ‘feel good’ strain because the uplifting effect hits you almost immediately.

Should you choose to continue smoking Ghost Train Haze, your mind will ultimately become cloudy and hazy. You shouldn’t take this strain if you’re planning to do any work because the foggy feeling kills productivity. Instead, you should smoke it with friends and share some good times.

2 – Purple Kush (The Marijuana Strain That is Couch Lock City)

This pure indica strain is a nighttime special and was named in the High Times’ Top 10 Most Powerful Strains in the world list. It has registered THC levels of up to 27% and is a cross of Purple Afghani and Hindu Kush. Purple Kush is one of the most sought-after West Coast strains because of its ability to help you relax.

Users will enjoy this sweet-tasting strain, but we have to tell you, it is only for evening and night time use because it will send you to sleep in a hurry.

You will experience an almost instant euphoric head high that makes you think deeply while also removing any feelings of pain you may have. The numbing body high is extremely pleasant, and you should feel completely relaxed and sedated within minutes of your first smoke.

There are few better marijuana strains to tackle insomnia and Purple Kush users also report serious cases of the munchies. If you’re a novice, even a small amount should cause you to trip out and experience a high best described as an out of body experience. Eventually, Purple Kush completely takes over your body and mind, and the high lasts for hours.

As well as winning the High Times award for Best Indica, a strain of Godfather OG grown by CHR LA Private Reserve broke the world record for highest THC content. According to High Times, this strain had a THC content of 34.04% which is truly incredible! It is a hybrid with 60% indica, 40% sativa, and is a cross of Bubba Kush, Granddaddy Purple, and LA Confidential. 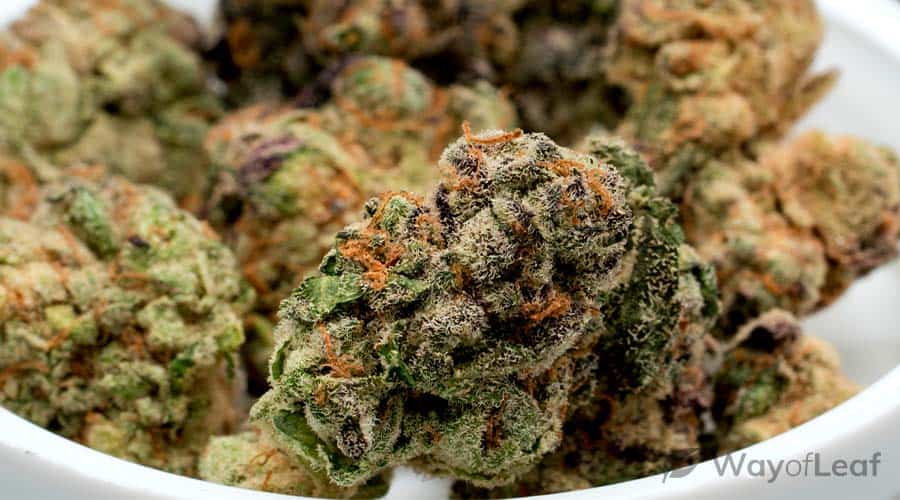 You will be smacked down by a cerebral head high almost as soon as you inhale Godfather OG. Initially, you’ll have an uplifting sensation and will soon feel joyful. This joy turns to outright euphoria as the world seems to be a place filled with wonder. Eventually, Godfather OG makes its way to the body and completely kills all tension.

If you’re a relative newcomer, a few smokes of Godfather OG can completely immobilize you so be wary! The earthy, pine, and grape scent and taste are positively disarming, but it won’t take you long to realize that the Godfather has claimed another victim! As well as being an outstanding strain for relaxation, it is brilliant for medical issues such as insomnia, anxiety, chronic pain, and PTSD.

Don’t be fooled by the pleasant aroma and fruity taste; Strawberry Banana is a strain capable of taking you to school. It is a regular on the High Times list of world’s strongest strains with some batches recording a THC content of over 31%. It is a cross of Crocket’s Banana Kush and Strawberry Bubblegum.

This indica dominant strain (70%) creeps up on you in a hurry as it begins with a head buzz that becomes euphoric, sometimes in minutes. Soon enough, you’ll be ready to unleash your inner Picasso as creativity flows from every pore. When the body high takes hold, your only option is to find somewhere comfortable to lie down because the full-body sedation is almost impossible to fight.

If you’ve never had Strawberry Banana before, you would be forgiven for underestimating its potency. The tropical strawberry scent is alluring, and the sweet fruity taste is absolutely divine. It is the ideal strain for calming you down after a stressful day and should be treated as a reward.

There is no question about it; Super Glue is a brilliant name for this marijuana strain because users are ‘glued’ to their sofas after using this indica dominant hybrid (40%). It is a cross of Northern Lights and Afghani and was the second most powerful strain recorded by High Times in 2017 with a THC content of over 32%.

Once again, newcomers should steer clear because, within a few seconds of smoking, you will receive an intense cerebral high that lifts your mood.

Your mind becomes clear, so you feel happy and focused at first. For a short period, you’ll be creative and capable of finishing your tasks in rapid time.

However, once Super Glue works its way to the body, you’ll feel as if you’ve taken a couple of sleeping pills. The tension leaves your body, your muscles become relaxed, and all you want to do is stay on your sofa and enjoy the wonderful high. Super Glue is the strain for people who need to sleep or if they just want an evening of pure relaxation.

Less is more with these strains. Have a little, see how you tolerate their effects and consume in moderation. If you do, you will get the best results out of these fast-acting and potent strains.