Radiant, gorgeous, frosty, glistening, stunning, delicious, medicinal. These are some of the adjectives used to describe marijuana. One word that you probably don’t see very often is ravishing. Despite it not being commonly used, it certainly is fitting, especially for the strains that we will be discussing in this list.

These strains are not only “ravishing,” but they possess their own unique and individually beautiful qualities. Whether you are looking for an indica, a sativa, or a hybrid, give one of these gorgeous ladies a try. Not only will their stunning good looks leave you speechless, but you’ll love how they taste and smell too.

Mimosa is relatively new to the cannabis scene. However, since its introduction, this up and coming creation from Symbiotic Genetics has spread like wildfire through the cannabis-loving community. This strain is truly stunning as it glistens and glimmers when placed in both sunshine and artificial light. 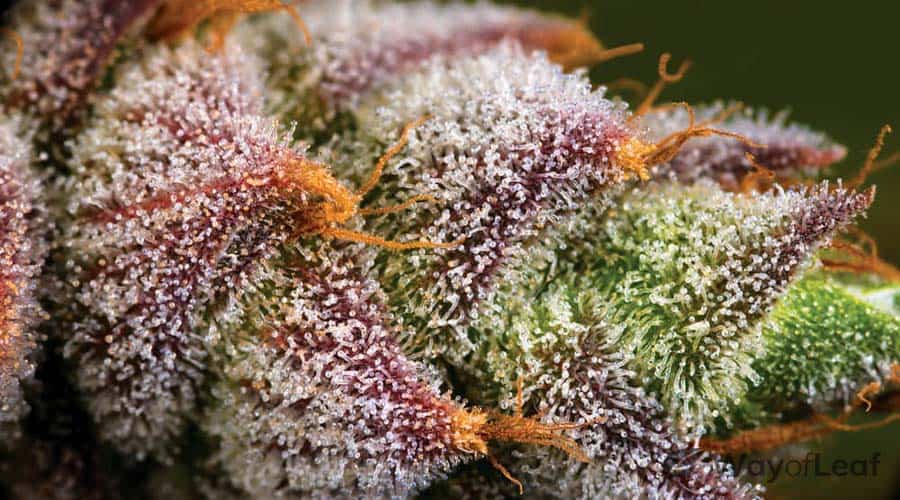 Mimosa is an exceptional sativa-dominant hybrid strain that has more than just good looks going for it. Users adore this strain because of its vibrant, frosty appearance, fruity yet zesty aroma, and incredibly energizing/uplifting effects.

Mimosa is a cross between the sativa Clementine and the indica Purple Punch. It is a masterful creation that combines the positive elements of both its parent plants. The most common consumers of the Mimosa strain reside along the West Coast, especially in California and Oregon.

With an average THC content of around 19-22%, a little goes a long way with Mimosa. Novices should consume only a small amount to see how they tolerate this strain’s effects. More experienced cannabis smokers, as if they were drinking the cocktail, will know when they’ve had enough.

The taste of the flower is no doubt part of what makes it so charming. Delicious notes of zesty oranges and other citrus fruit amplify and enhance Mimosa’s sweet initial flavor. The strength of the Purple Punch strain further complements Mimosa’s refreshing taste. Together they produce a combination that is similar to the famous poolside alcoholic beverage. Those who taste this strain agree that it’s just as delicious as the citrusy cocktail.

Appearance is the second major factor that makes Mimosa so desirable, because the buds radiate intense beauty that leaves witnesses in complete awe.

Although the buds are mostly green, they exhibit elements of vibrant red that infuse with the plant’s bright orange pistils. A dense coating of trichomes on this plant’s sugar leaves almost resemble a light dusting of snow on a winter’s morning.

Mimosa is a popular choice for sufferers of chronic stress, depression, chronic pain, cramps, and anxiety, due to its potency. This strain can boost your mood too, which will leave you feeling more positive and content.

The Black is a potent indica notorious for its dark, stormy, and moody appearance. This strain is almost entirely indica with a 90:10 indica to sativa ratio. Consumers of this strain say that it helps with relaxation, and can settle the nerves. Its latter effects are so potent that you may feel sedated and sleepy. The Black can also increase your appetite and is said to be effective at relieving a whole host of painful conditions. 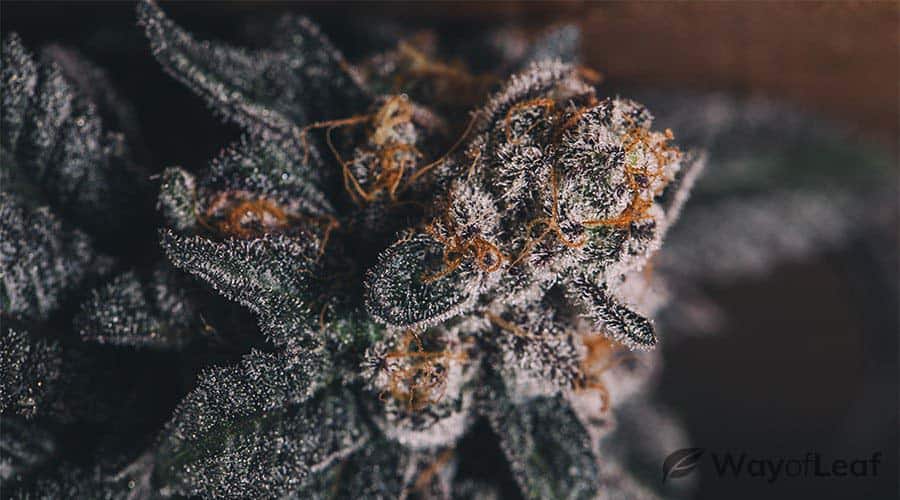 Apart from these qualities, The Black is stunning to look at too. With its deep dark hues thoroughly entrancing more than a few who have laid eyes on it. The fact that it smells phenomenal and tastes fantastic too are just added bonuses.

Entering the cannabis scene back in the 1980s, The Black did not begin to gain popularity until much later. It finally received the recognition it deserved in 2008 when High Times listed it as one of the Top 10 Cannabis Strains for that year. Since then, the buzz around this strain has continued to grow. With such a unique and foreboding appearance, it was difficult to miss this strain on a dispensary shelf.

Expert breeders at BC Bud Depot created this dark and mysterious strain. The Black originates from California and Vancouver Island in Canada and is now available all over North America.

With a THC content that sits at about 18-20% on average, The Black is undoubtedly not a mild strain. It is pretty potent, so novice smokers should start small.

The Black has a prominent and pungent aroma that reeks of grapes and other fruits. These sweeter scents are followed swiftly by spicy and earthy notes which tantalize the tongue. Hitting smooth and velvet-like when fired up, the smoke will roll right down your throat and into your lungs.

On the inhale, there are detectable notes of berries and fruits, along with a blend of spices and pepper-like hints. On the exhale, users say that The Black has a sweet, sugary aftertaste.

The appearance of The Black is undoubtedly its most unique feature. The densely-packed deep purple and black buds have an other-worldly appearance and quality. In between, the black masses are orange pistils, which juxtapose significantly from the dark shades around them. This strain’s frosty trichomes give this already gorgeous flower an extra glow and shimmer.

The Black has become an increasingly popular choice among the medicinal marijuana community. Medicinal consumers say that it can help to alleviate the symptoms of several conditions. Some of these include insomnia, chronic pain, anxiety, and depression.

If ever a photo of a cannabis strain conjured up images of a white Christmas, then surely this photo of the Mandarin Cookies R2 strain does precisely that. It has an almost Christmas-tree like appearance in this photo, and it’s heavily coated layer of resinous trichomes could fool you into thinking that it has just snowed. Also, after you’ve sampled some of Mandarin Cookies R2’s delights, it will feel like all of your Christmases have come at once. 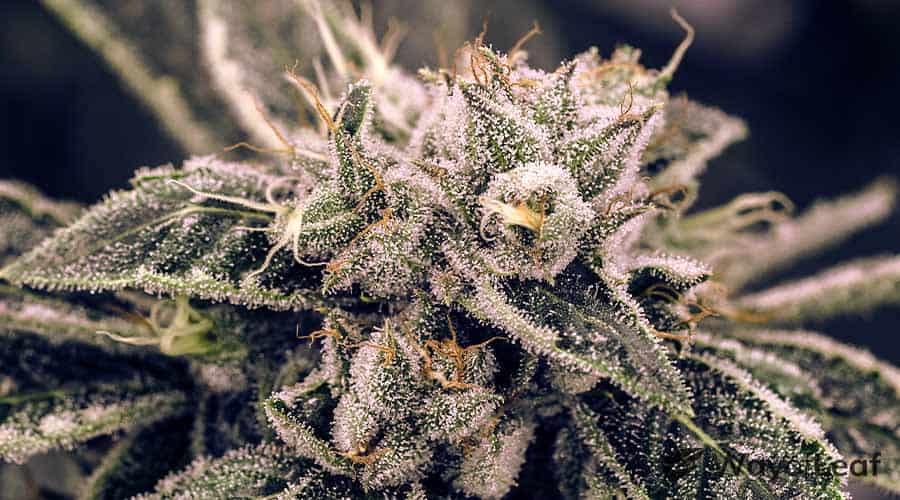 In terms of its aroma, Mandarin Cookies is a pungent mix of diesel combined with sweet, citrusy notes. Fans of the Mandarin Cookies strain say that it is the perfect after-dinner strain due to its calming and relaxing effects. While this strain is known to relax both body and mind deeply, the good news is that you won’t have to worry about becoming couch-locked.

Mandarin Cookies produces a high that is uplifting and euphoric. Later, as the high starts to dissipate, users of this strain say that it starts to make them feel sleepy. For this reason, this strain is an extremely popular choice for people with insomnia.

Super Lemon Haze is a multi-award-winning strain that is predominantly known for being one of the tastiest lemon-flavored strains out there. However, as you can see from the photo above, this strain is as much about style as it is substance. 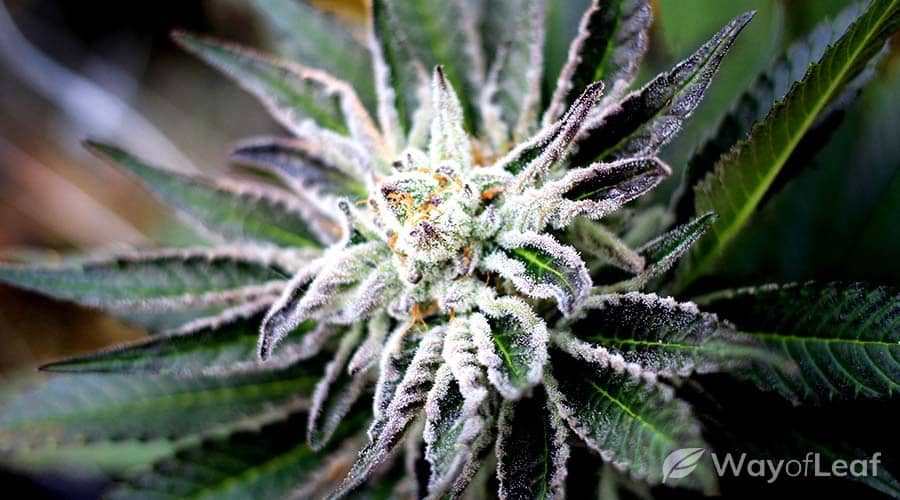 A truly remarkable and ravishing strain if ever there was one, Super Lemon Haze is beautifully frosted with snowy-white trichomes. This strain’s frosted appearance conjures up images of bitterly cold and sharp winter’s morning. Its bright-orange pistils and vibrant-green leaves with lemony-yellow hues add to this strain’s striking appearance.

Super Lemon Haze is a cross between the hybrid Lemon Skunk and the sativa Super Silver Haze. It was initially bred by Arjan of Green House Seeds.

Apart from this strain’s good looks, its standout features have to be its citrusy lemon taste and flavor. Super Lemon Haze’s taste has been compared to biting into a fresh and juicy lemon or sucking on a lemon-flavored candy. Either way, you’re going to experience all of those sweet, citrusy, flavors, as they linger long on the tongue after each exhale.

The Super Lemon Haze strain is a potent one, with an average THC level of around 20%. However, it can reach as high as 25% in some plants.

It produces a high that leaves you feeling happy, uplifted, and energized.

Super Lemon Haze is a great wake and bake strain. Consumers of this strain say that it helps to combat fatigue, and provides you with a welcome boost of energy. This strain is also a popular choice among people with depression or chronic stress due to its uplifting effects.

Tangie is an outstanding, multi-award-winning hybrid strain. To give you an idea of its quality, this strain won ten different awards at the Cannabis Cups in the space of ten months. 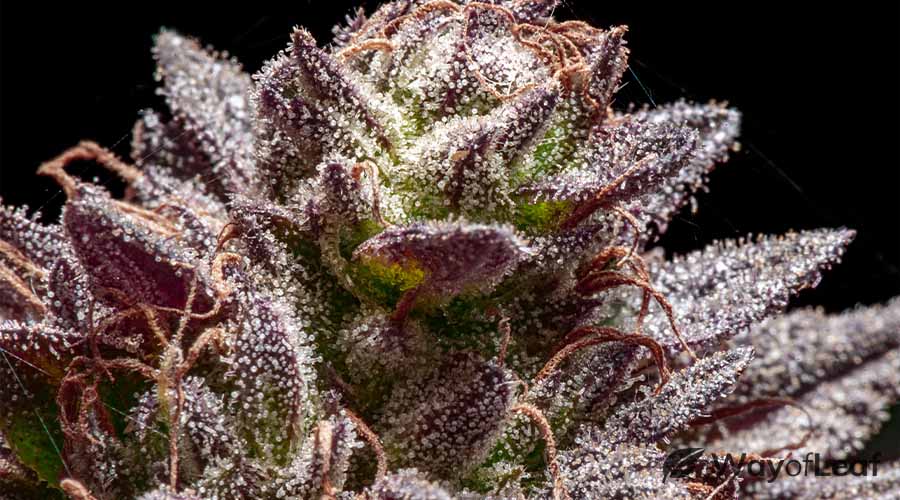 DNA Genetics in Amsterdam has set the bar very high in terms of sheer quality with Tangie. This strain is now one of the most sought-after among cannabis smokers.

In terms of its genetics, Tangie is a sativa-dominant hybrid strain (70% sativa, 30% indica). Some say it is a tribute to or a remake of the famous Tangerine Dream strain, which was popular in the 1990s. Tangie is a cross between California Orange and an unknown Skunk strain. However, the consensus is that it is most likely to be the phenotype Skunk No. 1. The reason for this is that Skunk No. 1 has been used for breeding so many other hybrids.

With a name like Tangie, it is not surprising that this strain has a distinctively sweet, citrusy tangerine aroma. Tangie’s flavors are a similarly tropically sweet citrusy orange mix, making this strain one of the best tasting out there.

When fully grown, Tangie is quite a tall plant with small, light green compact buds. A Tangie plant produces a generous amount of trichomes with bright orange pistils that grow prominently around the leaves. As you can see from the photo above, its purplish hues are breathtakingly spectacular and set this strain apart in terms of its beauty.

Tangie is quite a potent strain with THC levels ranging between 19%-22% and a low CBD level of 0.10%. Tangie’s cerebral effects are fast-acting. Users experience a euphoric high which tapers off gradually, leaving smokers of this strain feeling happy, uplifted, and energized.

Final Thoughts On The World’s Most “Ravishing” Cannabis Strains

It is clear that these five ravishing strains have more going for them than just their good looks. They all have their own unique standout characteristics that complement their beauty. Once you’ve laid eyes on these five strains, you’ll find them hard to resist.

13
6 min read
Join The Discussion
TOC
Premium
Your subscription has ended
If you love cannabis and want to support our site, join WayofLeaf Premium today and unlock
Best of all, part of your membership fee will go towards supporting the fight to legalize cannabis.
Sign Up for WoL Premium
Not now
I already have an account
×
Log in to Your Premium Account