Growing marijuana is something that everyone thinks they can do. There seems to be so much weed around these days that it must be easy to grow yourself.

In actuality, growing marijuana can require a bit of knowledge that you can’t get on your own without a few provided steps and tips; if you want to grow your favorite strain, it can be beneficial to find a growing guide.

This is especially true if you want to try and grow some Mazar x Blueberry OG, more commonly known as Skywalker OG – this versatile strain is a great one to begin your growing operations, but if you are looking for a growing guide for Skywalker OG, look no further.

Skywalker OG is a fabled cross between the Skywalker strain, with its strong hybrid qualities, and the classic OG Kush.

Skywalker OG is primarily indica-dominant, meaning that it provides a powerful sedative, relaxing effect. The effects of Skywalker OG are well known to last quite a short time, only about 90 minutes, but it provides a thoroughly potent and powerful high that manages to coast constantly through the entirety of the limited duration.

Interestingly enough, the ‘Skywalker’ part of the name has nothing to do with its ancestry – in actual fact, the primary parent for this strain is known as Mazar x Blueberry. However, during the initial spreading of its popularity, the leading grower was called Luke; this was all it took for it to become known as Skywalker. The world of marijuana can sometimes be a bit strange.

Skywalker OG is well known for its distinctive flavor profile, one that borrows heavily from its OG Kush ancestry.

The initial aroma is very similar to other Kush strains, but also contains an undercurrent of spiciness that is touching on herbal. The flavor is surprisingly different from the aroma, with a sweet earthiness that is undercut by the tart taste of berries.

Though the flavor and aroma are highly desired, the effects of Skywalker OG are what brings people back. As can be expected from a high-THC, indica-dominant strain, Skywalker OG primarily provides relaxation and happiness.

This feeling of calm serenity lasts for the entirety of the short high, usually backed up by a sensation of euphoria and, towards the end, gentle sleepiness that makes your bed look incredibly attractive.

The indica heavy qualities of Skywalker OG make this strain a perfect one for coping with mental issues, as well as dealing with trouble sleeping. This is firmly an end of the day strain, as the sleepiness that it will typically cause will likely make trying to accomplish anything else pretty tricky.

Thankfully though, the sleepiness isn’t as profound as with other indica strains – you won’t be completely knocked out, but your eyes will tend to feel a bit heavy, and the idea of a nap will seem very appealing.

With this strain being so great as a sleep aid and a mood elevator, it is no wonder that so many people want to try and grow it themselves.

So, let’s take a look at how easy it is to try and grow your own Skywalker OG.

Skywalker OG is a pretty great strain to grow for personal consumption, as it only has a moderate difficulty and doesn’t require any complicated techniques to understand.

Though you will need to learn a little bit about careful pruning, as long as you have a basic setup with which to grow your Skywalker OG, you won’t find it too difficult.

Skywalker OG is a plant that excels under many conditions, most likely due to its OG Kush parentage that causes it to have a hardy tolerance for all manner of conditions.

This means that you don’t need any intensely complex techniques, except for proper pruning.

Pruning is the process whereby you selectively lop bits off of the plant to encourage it to grow properly.

For Skywalker OG, you need to utilize a pruning technique called ‘topping’ which, as the name implies, involves cutting off the top of the plant. 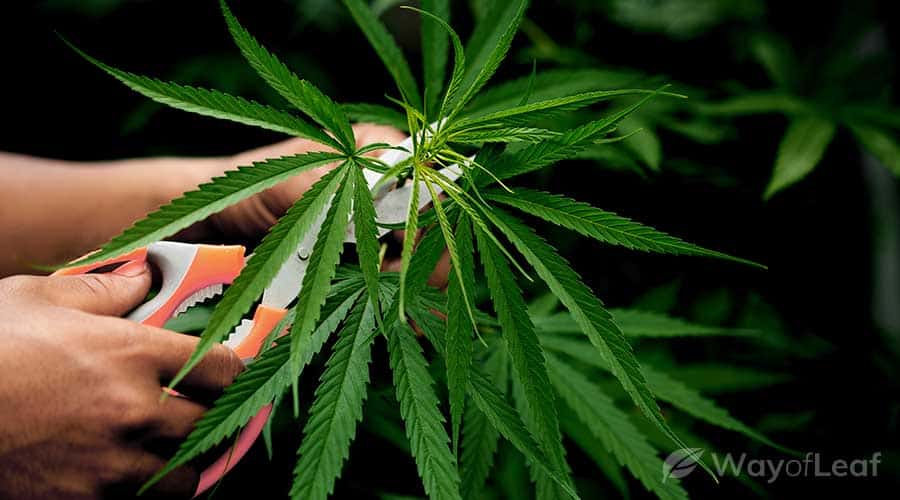 By snipping off the very top of your Skywalker OG, you promote a bushy growth that allows for more cola production, leading towards an excellent yield of actual, useable marijuana.

Once topped, Skywalker OG tends to grow pretty full, so make sure you have planted your plants wide enough apart to ensure they don’t crowd one another.

You can also provide structural support to allow for healthy bud development, such as with a trellis or other wooden beam structure.

Perhaps the best thing you can do to promote a healthy plant is to ensure you utilize healthy and nutrient-rich soil. Though some strains can survive perfectly well in inadequate soil, Skywalker OG prefers soil that is stable and has been unused by other plants in recent seasons.

Either use it in a part of your garden that you haven’t planted marijuana in before, or buy more nutrient-rich soil to replace what you have.

Now that you have utilized these techniques let’s take a look at what kind of yield you can expect.

Assuming that you utilize the tips provided for your Skywalker OG, you can expect a very high yield.

The topping is really what provides the majority of the high yield, as the broad growth creates a considerable quantity of large, slightly brown buds.

However, if you want to get the best buds possible, you also need to feed it properly.

To ensure your Skywalker OG flourishes, make sure you are feeding it right.

Though this is true of all plants, with hybrid strains like Skywalker OG, it is more important than ever.

You are going to want to feed your plant very heavily, using a mix of all natural compost and regular, commercial fertilizer.

One thing you can do for feeding that also doubles as a way to combat powdery mildew is to utilize a compost tea.

Compost tea is made by steeping real, naturally-made compost in water, then putting the nutrient-dense liquid into a spritzer bottle. By spritzing your plant with this aerated water, you are not only feeding your plant in a natural, unobtrusive way, but you are also helping to fight off mildew due to the proper level of moisture being applied to the plant.

This method of feeding is easily the best for promoting a healthy, vibrant plant, whether you are growing it indoors or outside.

Like with all marijuana strains, the question of whether to grow it indoors or outdoors is perhaps the most confusing. Some strains excel in either condition, but others require one or the other, due to strict temperature or climate requirements.

For Skywalker OG, you can thankfully use either.

If you choose to grow it outside, make sure to utilize compost tea to help prevent mildew due to humidity levels. Additionally, this strain can sometimes suffer from root rot, so make sure you are frequently checking your plant’s roots for damaged or infected tissue. To avoid it, ensure you are watering it often enough to prevent dead roots.

If you prefer indoor growing, try and utilize LST, or Low-Stress Training, methods to promote higher yields. This means you need to bend or tie down the plant as it grows, to encourage a full bush and more bud development, rather than the plant reaching as high as possible.

Skywalker OG can excel in either environment, so it is just up to you which you prefer.

Skywalker OG is relatively typical in its flowering time, requiring roughly 9 weeks to reach the flowering period. This is a good amount of time to practice your pruning and LST technique, as you can gently bend and encourage your plant to create the highest yield possible, all without stressing out your plant’s development too much.

Skywalker OG prefers a reasonably dry environment, with temperatures between 68 and 80 degrees Fahrenheit. You need to try and avoid any kind of excessive moisture or humidity, as these two things are going to be the most significant risks to your plant, both in powdery mildew and in root rot.

It isn’t always easy to try and create the ideal circumstances for your plants when you live in the western world, but if you have a suitable temperature zone (whether through indoor heaters or just the natural ambient temperature), then you shouldn’t have any trouble growing Skywalker OG yourself.

Despite Skywalker OG’s sci-fi name, this strain won’t take you to far out, psychedelic places – it won’t even really give you that burst of creativity that you might expect. You sadly won’t be writing the newest sci-fi space opera.

However, Skywalker OG is excellent for gentle relaxation, followed by a nice calm tendency towards taking a nap.

With a versatility in its climate preferences and a relatively simple list of required techniques, Skywalker OG makes a great strain to grow at home for personal use, whether it’s to treat depression and anxiety, or to help you get to sleep at night.

Though words like “compost tea” and “topping” might seem overly confusing, as long as you do a bit of research first, growing your own Skywalker OG will be no problem at all.

How to do it the right way

What you need to get started

Mushrooms Growing Around My Cannabis Plants: Good or Bad?

How to Set Up a Greenhouse for Weed

Get the most from your cannabis garden

Want to Setup a Marijuana Grow Room? Here are the Costs

How much will you really save by growing your own?

The Most Popular Fertilizers for Growing Cannabis [2023 Guide]

Some of the best fertilizers available for your marijuana garden.

How to Prune Cannabis Plants for High Yield Buds

Get the most potent yields!

All you need to know to get started...

14
12 min read
Video
Join The Discussion
TOC
Premium
Your subscription has ended
If you love cannabis and want to support our site, join WayofLeaf Premium today and unlock
Best of all, part of your membership fee will go towards supporting the fight to legalize cannabis.
Sign Up for WoL Premium
Not now
I already have an account
×
Log in to Your Premium Account