Will CBD-Infused Beer Become the Next Big Thing?

When we first looked at CBD-infused beers a few years ago, red tape prevented brewers from getting involved in this exciting cannabidiol sub-niche in the United States. Federal agencies such as the DEA and ATF were slowing down the inevitable growth of this particular market.

Unfortunately, things haven’t changed much. Prospective producers of CBD-infused beer in America have many issues to contend with. A handful of states don’t even allow CBD in any food or drink. The FDA says this practice is still illegal, and hardly any brands even try to make CBD-infused beer.

Internationally, fewer obstacles are stopping the CBD-infused beverages market from becoming a juggernaut. Let’s find out more about this fascinating sector.

What Can CBD-Infused Beer Do?

CBD is the most prominent non-intoxicating cannabinoid in hemp and most cannabis strains. The belief is that you will experience a different sensation from what you would get drinking a regular beer.

It is marketed as a drink that allows you to relax without becoming drunk or high. Those who have tried this product claim that it helps them to relax. Some users also suggest that their mood improves after a CBD beer.

Those who have tried this product claim that it helps them to relax.

Certainly, there is evidence that cannabidiol can help people unwind. A study published in 2019 looked at CBD’s effects on people with anxiety. The study also included individuals who had insomnia. The volunteers who consumed between 25mg and 75mg of CBD a day for a month reported reduced anxiety and improved sleep quality.

Interestingly, CBD could help prevent some of alcohol’s adverse effects. This includes reducing the effect of a hangover and preventing cell damage and disease.

How Much Alcohol Does CBD-Infused Beer Have?

Combining CBD and alcohol could have effects beyond what most people realize. Both substances lower your inhibitions and cause you to relax. If CBD helps you attain a nice, mellow feeling, using it with alcohol could result in a strong level of sedation. 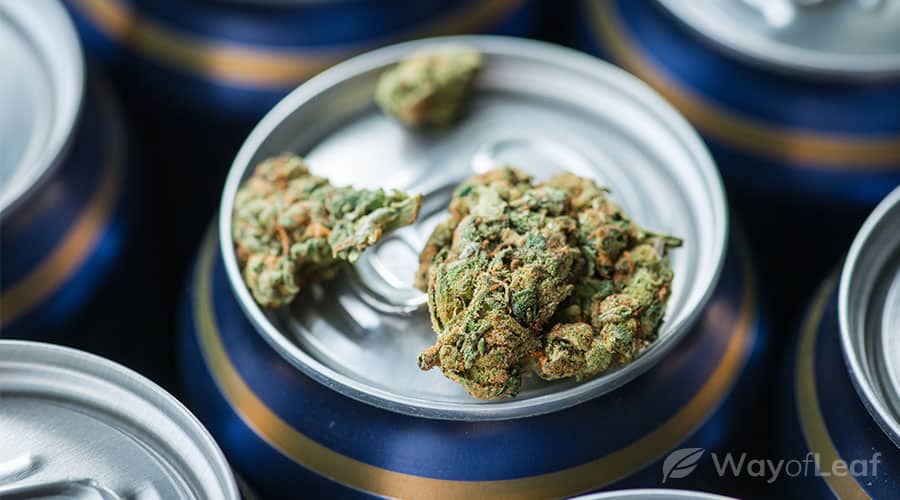 The trouble is, there is conflicting information. A study published in 1979 involved volunteers combining CBD and alcohol. It found that those who mixed alcohol with a CBD capsule had lower blood alcohol levels than individuals who consumed alcohol alone. More research is needed to understand the effect of CBD combined with alcohol fully.

Some CBD beers contain a low alcohol level. Typically, these beverages contain no more than 0.5% ABV. It is the same story in the THC-infused beer market. Manufacturers are aware that combining the two is probably a bad idea and avoid it.

It is a different story overseas. International CBD beer brewers have no qualms combining the two substances. Their beverages contain close to the same amount of alcohol as ‘regular’ beer.

How Do Companies Create CBD-Infused Beer?

The development of CBD beer is very similar to its non-alcohol counterpart. It begins with the creation of a non-alcoholic flavor base. This satisfies the taste buds of people who like beer but don’t want to consume alcohol.

After the brewer removes the alcohol, a cannabis nano emulsification is infused into the liquid. This practice ensures that the CBD suspends properly in the beer. It also increases the absorption rate and provides a faster uptake time. Therefore, users benefit from a higher bioavailability rate than with many rival CBD products.

For brewers that create CBD beers with alcohol, the process is effectively the same as normal. They use nano emulsification to add the CBD, but the brewing process doesn’t change otherwise. This means you can expect CBD beers to taste as good as their non-CBD counterparts.

Is CBD-Infused Beer Widely Available in the United States?

Unfortunately, little has changed in terms of bureaucratic red tape delaying the growth of the industry. While THC-infused beer is subject to detailed testing, its CBD counterpart is not and remains a ‘Wild West’ of poor regulation. Also, THC beers enjoy the same status as edibles in legal states. Therefore, you can buy and sell them in states where recreational use of cannabis is allowed.

CBD beers are stuck between two stools. While there are distinct recreational and medical marijuana programs in dozens of states, hardly any have clear guidance on CBD use. Like THC, CBD remains a federally illegal substance. Only Epidiolex, a pharmaceutical product containing CBD, has received the FDA seal of approval.

The CBD industry as a whole must continue to wait while the FDA makes the necessary legislative updates. Also, states such as Maine, New York, and Ohio have banned the sale of CBD-infused foods and beverages. In most cases, it is down to the fact that CBD isn’t yet deemed safe as a food additive.

Who Brews CBD-Infused Beer in America?

There are hardly any companies specifically creating CBD-infused beer in the United States. This is in contrast to the THC beer market, which is taking off. Outbound Brewing is one of the very few brands trying to bring CBD beer to Americans. It announced its plans to launch a hemp beer range in early 2020.

However, over a year later, there is still no news on when consumers can expect these products to become available. Outbound has Blood Orange Haze, Grapefruit Haze, and Pale Haze flavors lined up. Each bottle contains 20mg of broad-spectrum hemp extract. Yet, the brand is clearly still waiting to see if they can legally sell it before committing.

A few years ago, Longtrail Brewing Co. and Coalition Brewing both released CBD beers. However, production of the beverages was soon halted. It is difficult to tell when CBD-infused beer will become widely available in the United States.

One must have sympathy for would-be CBD beer brewers in the United States. They are missing out on what is becoming a huge market. The CBD beverages industry as a whole has the potential to hit $3 billion per annum within the next few years.

It is hard to say what percentage relates to the CBD beer market, but the drink is popular in several countries. Over in Hong Kong, OH CBD Beer, a new craft beer brewery, became the first to launch CBD-infused beer in Asia.

The brand sold the first batch of 2,000 bottles within ten days after the launch in January 2020. Interestingly, the beer contains 3.5% ABV. At over $14 a bottle, you’ll certainly need plenty of money to make it your drink of choice on a night out!

The CBD beverages industry as a whole has the potential to hit $3 billion per annum within the next few years.

Another Hong Kong brewer, Young Master, released its CBD beer in August 2020. It sells an estimated 10,000 cans per month!

The United Kingdom is another country where CBD-infused beer is available for sale. Brands such as Green Times Brewing and Hope & Hemp Brewing Co. are faring extremely well. The latter has an alcohol content of 4.1%, along with 10mg of CBD per can. It is genuinely fascinating to see these brands combining the substances since American breweries are unwilling to try.

Remember, the belief is that combining CBD and alcohol could result in a higher-than-normal level of sedation. Yet, we have heard no reports of any negative incidents involving CBD-infused beer with moderate alcohol content.

At present, CBD-infused beer is practically nonexistent in the United States. The federal and state laws surrounding the cannabinoid continue to confuse. As a consequence, brewers based in the United States are unwilling to take the risk. Those who have tried to make CBD beer in the past quickly shut down.

Abroad, it is a different story. Brands in places like Hong Kong and the United Kingdom are free to brew CBD-infused beer. Although their products are expensive, these companies are seeing a growing demand. Once the dust settles in the United States, any brewer that can create a tasty CBD beer will likely enjoy enormous profits.

Related article
Best CBD Drinks – How Do They Compare?

A more refreshing way to take …

Do You Need a Prescription for CBD Oil?

Confused by CBD laws? You're not alone...

What Is a CBD Tincture? [Explanatory, Tell-All Guide]

Read this before you buy

5
12 min read
Join The Discussion
TOC
Premium
Your subscription has ended
If you love cannabis and want to support our site, join WayofLeaf Premium today and unlock
Best of all, part of your membership fee will go towards supporting the fight to legalize cannabis.
Sign Up for WoL Premium
Not now
I already have an account
×
Log in to Your Premium Account