The link between marijuana and video games goes back decades as gamers claim that the herb accentuates their entire experience. Imagine being high while guiding Link through the enormous Breath of the Wild world. It may seem as if it is you that is fighting evil in the land of Hyrule.

As it happens, there is a little bit of science behind the notion that cannabis makes video games better. As you probably know, video games could improve hand-eye coordination, whereas weed offers antioxidant and anti-inflammatory benefits.

As it happens, there is a little bit of science behind the notion that cannabis makes video games better.

The Groningen Mental Enhancement Department in the Netherlands completed a 12-month study on how weed and video games impacted Alzheimer’s patients’ brains. All patients played challenging video games daily, but 50% of them used marijuana. Ultimately, the research team found that marijuana users had a 43% better memory retention than the sober group.

We now live in an age where professional video game players are a real thing. The Electronic Sports League (ESL) is the gaming world’s largest eSports league. It has added saliva-based drug screening to its list of rules. All prospective competitors must undergo one of these tests before being allowed to compete in a tournament. This is very bad news for competitive gamers who enjoy being high while playing.

According to the ESL’s head of communications, no one is allowed to consume marijuana from the first day of the tournament until after the final. This is to ensure they don’t have “an unfair advantage” over everyone else! As stoner gamers reel from this terrible news, there may be light at the end of the tunnel.

Could CBD Take THC’s Place as a Gamer’s Best Friend?

The best video games suck you into the world of fantasy, and you can spend hours fighting computer-generated enemies. You need fast reflexes, excellent concentration, and good situational awareness to succeed. However, after a few hours, it is normal for one, if not all, of these traits to dissipate and negatively impact your performance. For ESL players, this is a disaster that costs them a chance at the big prize. 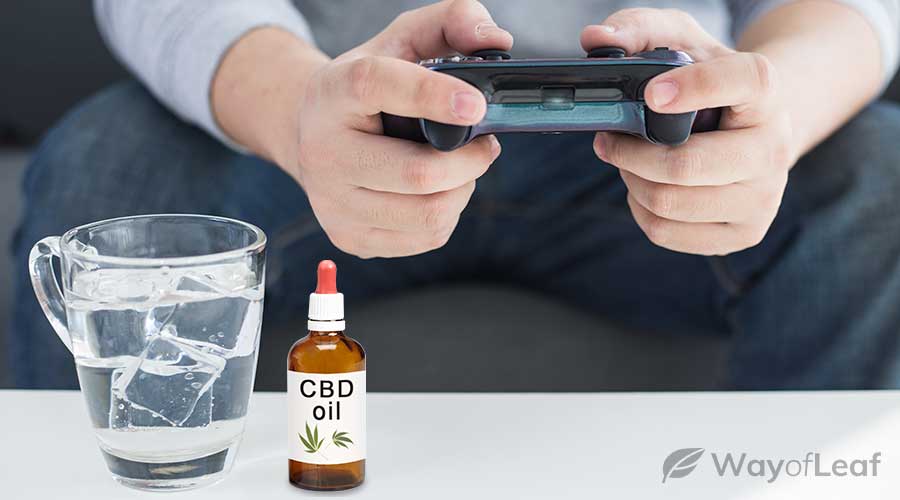 Now that marijuana isn’t allowed at ESL tournaments, what’s a pro gamer to do? Instead of getting stoned on THC, they could try cannabidiol, better known as CBD. It is the most abundant non-intoxicating compound in the Cannabis sativa plant.

You will find it in significant quantities in strains such as Charlotte’s Web and ACDC. However, companies usually extract it from industrial hemp plants. That is because industrial hemp cultivation is now legal in the United States if it contains a maximum of 0.3% THC.

Therefore, gamers can use CBD to their heart’s content during any gaming tournament. Using products from a reputable company means you shouldn’t fail a drug test. Marijuana screenings look for THC metabolites. Since your system won’t have any when you consume CBD, you will pass the test.

Can CBD Provide Gamers with a Similar Advantage to THC?

When you consume the compound, it interacts with your endocannabinoid system (ECS). CBD stimulates the brain’s receptors, and when your body isn’t functioning properly, CBD provides a helping hand.

Picture the scene: You are locked in combat with a fellow gaming pro with thousands of dollars at stake. At this point, emotions are running high, and your body’s neurotransmitters are in a chaotic mood. When you allow your emotions to get the better of you, performance suffers. However, if you use CBD, your brain avoids the chaos, and as a result, you stay nice and calm.

Helping to calm the mood…

How CBD Keeps You in the Game

You could have the best hand-eye coordination in the world along with catlike reflexes. However, it will all count for nothing if you can’t remain calm during the game. Anyone who has ever played a video game has run into trouble at some point. Whether it is a fiendishly difficult boss or else you’re stuck with a low-quality sports team, you may want to fling your controller through the screen.

CBD is believed to be a mood regulator. When you consume it before playing, it can help keep you calm and prevent emotion from ruining your performance. When your brain is about to become overstimulated, CBD recognizes the situation and sends endocannabinoids out to calm your cells.

Once you are relaxed, making the decisions that get you or your team out of a real mess gets easier.

Have you ever been in a mass multiplayer game where there are about a dozen other players and scores of bad guys on the screen simultaneously? It can be too much for some gamers who fall apart under pressure. CBD could help calm your nerves. Once you are relaxed, making the decisions that get you or your team out of a real mess gets easier.

In certain strategy games, you need to know where and when to use special items. If you use them at the wrong time, you’ll have nothing left for when you need it. Once again, CBD’s potential ability to regulate your neurotransmitters comes to the rescue. As a result, your brain has more time to think. This process prevents you from making silly, impulsive decisions.

We have heard of video game bars that have CBD soda on tap! If this isn’t a sign that the gaming community has embraced the compound, we don’t know what is. eSport is an industry set to exceed the $1 billion mark in revenues soon, and the CBD oil market has already reached that lofty goal.

Professional gamers are constantly seeking to get an edge; hardly a surprise when you see the prizes on offer. Now that marijuana use is strictly illegal during competitions, gamers have turned to CBD. They hope that the cannabinoid doesn’t show up in a drug screening. It appears as if CBD improves cognitive response, which is a major plus if you are a gamer.

Even if you don’t fancy entering an ESL tournament, cannabidiol may keep you relaxed during potentially stressful situations. Both in video games and real life. It is amazing how a clear mind finds new ways to get past problems that previously caused real torment.

Of course, the benefits of CBD go way beyond video games. It is now widely used to help with medical conditions such as anxiety, depression, chronic pain, and epilepsy. Before you rush out to purchase CBD, please remember that it is still an unregulated market.

We recommend that you read our list of CBD seller reviews. There, you will find reputable companies that sell organic cannabidiol free from pesticides, GMOs, and insecticides.