If you know anything about cannabis, you have probably heard of sativa and indica strains. But did you know that there is also a third variety of the plant? Cannabis ruderalis is a lesser-known cousin of these more popular strains. It is not something you are likely to find in your local dispensary.

However, if you are a fan of hybrids or love to grow marijuana, you may have encountered cannabis ruderalis without even knowing it. It is an unfamiliar plant with extremely low THC content. However, it possesses some unique benefits which have made it popular with breeders across the globe.

What Is Cannabis Ruderalis? An Overview

There is disagreement within the scientific world regarding whether cannabis sativa, indica, and ruderalis are separate species or three subspecies of the same plant. Either way, cannabis ruderalis is distinct from its more recognizable relatives for several reasons.

Cannabis ruderalis is a weed in every sense of the word.

The name ruderalis comes from the Latin word rudus, meaning ‘rubble.’ Plants with ‘ruderalis’ in their names tend to grow in the wild regardless of human activity or other disturbances to their habitats. This means that cannabis ruderalis is a weed in every sense of the word. It is easy to imagine this plant growing untamed on rocky wastelands or even alongside a busy highway.

Cannabis ruderalis was first classified by a botanist named Janischevsky in 1924. It was discovered far later than its sativa and indica counterparts. The precise origin of the plant is unclear. However, it possibly evolved from cultivated hemp plants, which ‘escaped’ and spread across the land over time.

It is thought to be native to the vast Siberian region of Russia. However, ruderalis is probably descended from the landrace strains of Central Asia and you can also find it in Asia and Europe. There are also reports of the plant growing in parts of North America.

Cannabis ruderalis is a relatively short plant with a thick, fibrous stem and broad, pale green leaves. Its buds are small but fairly dense in structure.

It has a low THC content compared with sativa and indica strains. However, it is rich in CBD, meaning that it could have certain medicinal properties. Its genetics potentially lie somewhere between industrial hemp and the marijuana used for medicinal or recreational purposes.

Related article
What Are the Major Differences Between Hemp and Marijuana?

All you need to know.…

The thing that makes cannabis ruderalis special, though, is its ability to flower automatically without changes to its light/dark cycle. Experienced marijuana growers will know that sativa and indica strains need approximately 12 hours of darkness a day to begin flowering. Ruderalis, on the other hand, flowers as soon as the plant becomes mature, regardless of how much daylight it receives.

This unusual feature has made cannabis ruderalis a popular plant among marijuana breeders around the world. Ruderalis’ autoflowering potential has allowed breeders to develop hybrids with a far shorter flowering time than average. As a result, they benefit from more harvests every year.

What Is the Difference Between Ruderalis, Sativa, and Indica Strains?

Ruderalis, sativa, and indica cannabis strains are all native to different regions. As a result, they have developed very different growing habits over time.

Since cannabis ruderalis originates from a region with long, harsh winters, it evolved as a small and fast-growing plant. Its autoflowering abilities mean that it can finish flowering during the summer. This is despite the long daylight hours experienced in northern regions throughout the season. 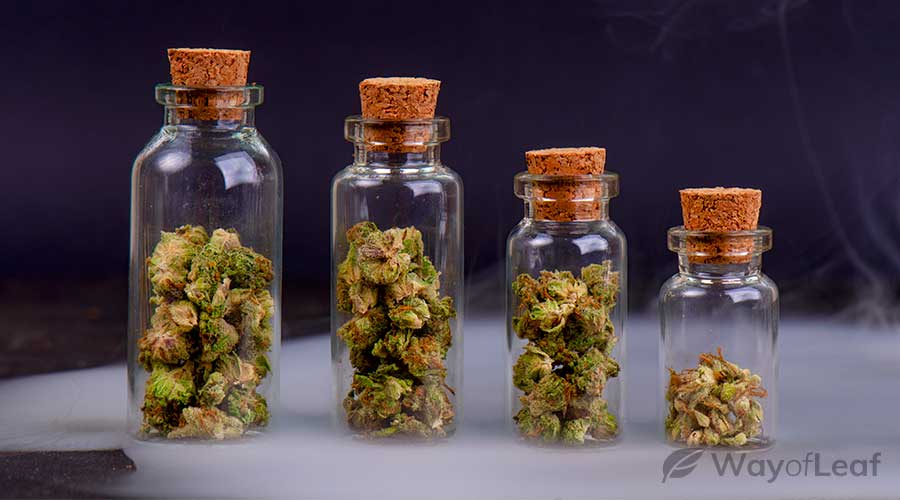 Similarly, indica strains tend to have a relatively short flowering time since they originated from the Himalayas’ foothills. They would, therefore, need to reach maturity quickly before the colder weather arrived. Like ruderalis plants, indicas tend to be short and stocky with broad leaves. However, cannabis ruderalis produces very little THC. In contrast, indica strains are known for their dense buds, laden with cannabinoid-rich resin.

Sativa strains are native to warm, tropical regions. Therefore, unlike their cousins, they can afford to spend a far longer time flowering. Because of this, sativa plants tend to grow much taller than either ruderalis or indicas. Indeed, they may reach a staggering 20 feet in height. They also have long, slender leaves and fluffy buds. These plants are a wonder to behold when grown outdoors with ample space.

There is a commonly held belief that sativa and indica strains have different THC/CBD contents and, therefore, different effects. Sativas are thought to produce a more cerebral, uplifting high. Meanwhile, indicas are believed to be more sedating and provide a powerful ‘body high.’

Most commercial strains are now bred to have an exceedingly high THC content regardless of their heritage. However, indicas do tend to contain slightly more CBD. Several strains are explicitly bred for high CBD content, and these are usually indica varieties.

As we have already mentioned, cannabis ruderalis is low in THC but high in CBD. Therefore, it is unlikely to have any intoxicating effects but could prove useful medicinally.

To summarize the most significant differences between ruderalis, sativa, and indica marijuana strains, check out our handy comparison chart below:

Cannabis ruderalis is mainly used commercially to create autoflowering hybrid strains. These plants are known for their short growing cycles and ability to flower independently of changes to their light/dark cycle.

Some examples of popular autoflowering cannabis strains include:

This sativa-dominant strain has all the uplifting, energetic properties of its namesake, but with a greatly reduced flowering time. The original Amnesia Haze can take up to 12 weeks just to flower. In contrast, the auto version takes less time than this from seed to harvest. Given enough space, this plant can reach heights of around 5 ft and could yield between two and five ounces per plant.

Royal Queen Seeds created this sativa-dominant autoflowering strain by crossing cannabis ruderalis with a Skunk strain. This bud provides a high which is relaxing but without being too overpowering. Despite its sativa genetics, Royal Dwarf is a compact plant ideal for growers with limited time and space. You can harvest it after just 8–9 weeks, and it yields up to 2 oz per plant.

Northern Lights is an indica-dominant strain known for its relaxing, euphoric effects. The autoflowering variety is ready to harvest in as little as 11 weeks. It has a generous yield of up to 7 oz per plant when grown outdoors, or 19 oz per square meter indoors.

This is another classic strain that has received the autoflowering makeover. White Widow is an indica-dominant strain known for its sedative properties and ability to relieve pain and anxiety. You can grow White Widow Automatic from seed to harvest in just 75 days, and it yields 6–8 oz per plant.

The name of this indica-dominant strain says it all. Easy Bud is simple to grow, with a fast-flowering time of 8–9 weeks. This is the perfect strain for novice growers. It can yield over 2oz per plant outdoors and 11 oz per square meter indoors. Its effects are strongly relaxing, euphoric, and it may even make you feel somewhat aroused.

Cannabis ruderalis doesn’t have a high THC content, nor is it particularly impressive to look at. Nonetheless, this unusual plant does have a lot to offer. With its autoflowering abilities and compact nature, you can use it to create hybrids that are fantastic for growers short on time or space.

With its autoflowering abilities and compact nature, you can use it to create fantastic hybrids.

As it is such an underrated plant, you may not have heard of cannabis ruderalis before today. However, the popularity of autoflowering strains means you’re likely to hear more about it in the future.

17
6 min read
Join the discussion
TOC
Premium
Your subscription has ended
If you love cannabis and want to support our site, join WayofLeaf Premium today and unlock
Best of all, part of your membership fee will go towards supporting the fight to legalize cannabis.
Sign Up for WoL Premium
Not now
I already have an account
×
Log in to Your Premium Account