Cannabis and its consumption have been a part of human history for thousands of years. It was probably initially grown in Southeast Asia, and this flowering plant was made into industrial fibers and smoked recreationally since before the Europeans discovered America.

Methods of smoking it, whether for medicinal or recreational purposes, differ all over the world. Some like to roll it into joints; others light up pipes. Certain cultures prefer to eat or drink it, make cannabutter, or, if they have the industrial know-how, extract cannabinoids such as THC and CBD from the plant.

Ever since the herb made it to American shores centuries ago, we have been happy to adopt the wild and wonderful weed creations of other nations. One of the most potent ‘inventions’ to make its way to the United States is the unusual-looking cannabis Thai Stick.

As the name suggests, they originated in Thailand and offered a seriously powerful smoking experience.

History of the Thai Stick

Cannabis Thai Sticks are ‘Jolly Green Giants.’ They consist of whole-bud marijuana cigars wrapped in leaves of the plant. The name came due to the “Thai” variety of marijuana. This strain, known as a “landrace” for its unique cultural origins, was one of the first strains grown in Thailand and became famous for its psychoactive properties.

A pure sativa strain, Thai is the grandfather of many famous strains such as Voodoo, Juicy Fruit,  and even the classic Haze. Thai became known to the rest of the world thanks to American soldiers bringing it back to their home country after they were sent to Vietnam during the late 1960s. The sticks themselves are almost certainly several centuries old, if not even more ancient.

During the Vietnam War, many soldiers experienced a freer, more open-minded mentality towards drugs during their time overseas. Additionally, with expanding air travel and international trips becoming more commonplace, many Americans fresh out of university wanted an experience out of their comfort zone. As a result, they traveled to Thailand.

Weed from the Land of Smiles first came to the U.S. in the 1960s through the Army Post Office. There was a profound difference in the quality of pot from Thailand, and herb from Cambodia and Vietnam. In the early 1970s, High Times commented that Thai farmers produced cannabis that sold for $3 per kilo. In America, the same product was worth over $4,000 per kilo!

Groups of surfers, mocked as ‘draft dodgers,’ smuggled shipments of Thai sticks to America.  The sticks immediately attracted Western weed lovers due to a combination of their exotic appearance and immense potency. Remember, this creation included Thai weed, which was far more powerful than what was available in America, and also involved the use of high-THC hash oil.

What Happened to Thai Sticks?

Although they are beginning to see a resurgence in certain marijuana circles, Thai Sticks have all but disappeared – or at the very least, have remained in Thailand. Stricter policies and professional government agents meant that smuggling marijuana, both regular bud and complete Cannabis Thai Sticks, became extremely difficult.

As American public opinion soured on cannabis, the government began cracking down on the illegal importation of the plant. When the U.S. adopted the Controlled Substances Act (CSA) in the 1970s, the writing was on the wall for all forms of weed.

Considering Thai Sticks are enormous and difficult to hide, they were one of the first types of marijuana consumption to disappear. The rise of homegrown varieties of weed also led to the product’s downfall. As weed smokers returned from their Southeast Asian sojourns, they began growing marijuana in their backyards.

Over time, this shifted into a significant number of home growers, creating a surprising new craft industry of American-grown marijuana. As production grew in the U.S., the whole supply chain migrated with it. Instead of relying on Thai Sticks coming from Thailand, local breeders produced everything. As a result, it was easy for dealers to get their hands on the product and sell it. Plus, it’s pretty hard to attach marijuana to bamboo skewers when you don’t have any bamboo in the first place!

When the Vietnam War ended in the mid-1970s, it led to the destruction of the supply chain. Remember, the primary means of export was the constant movement of troops between the United States and Southeast Asia. Once the link vanished, so did the presence of Thai Sticks in the U.S.

How to Make a Cannabis Thai Stick

A Cannabis Thai Stick sounds like an explosive device, or at least something more sinister than weed! It consists of the buds of seedless marijuana skewered on a stem. The canna-kebab gets wrapped in fibers from the cannabis plant and coated with hash oil for extra potency.

Instead of the traditional joint, where you grind the marijuana buds into small pieces and roll it in the paper, you use whole parts of marijuana buds. You impale your buds on a bamboo skewer to help them stay in place. The bamboo also offers a convenient method of holding the Thai Stick. You need the following to create this marvelous weed cigar:

A Step-by-Step Guide to Creating a Cannabis Thai Stick 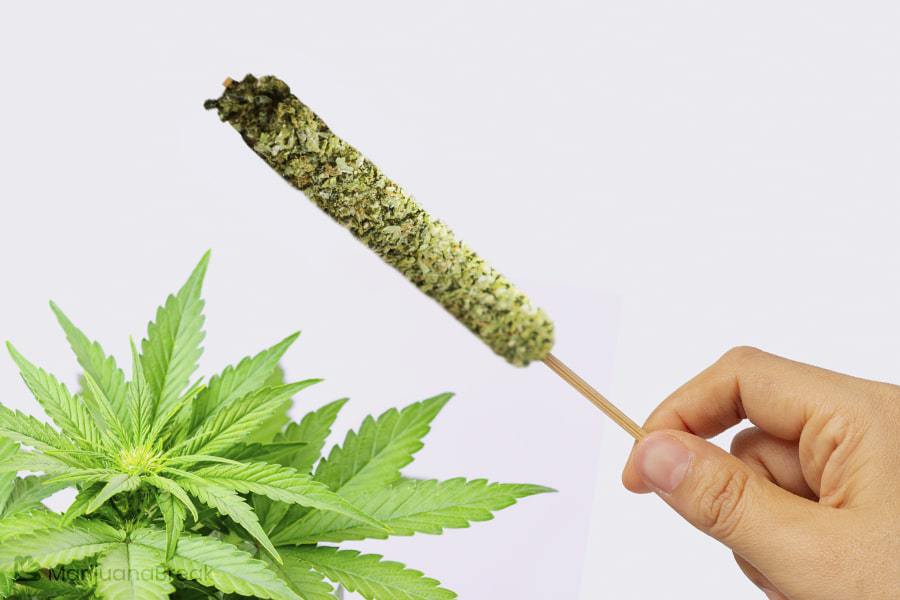 In the ‘classic’ creation, you need three layers of washed leaves. Originally, the process involved placing the cigar in the fridge for at least 24 hours for every coating of leaves. You can skip this process by coating with hash oil after the first layer, and then apply the second layer immediately. Repeat with the third layer.

To recreate the authentic taste, you must place them in a plastic bag and bury them three feet beneath the ground for a full month! Another option is to vacuum seal them for a week. If you hate waiting, smoke your Thai Stick as soon as it is completed. You won’t get the ‘right’ taste due to a lack of curing, but you will get very high.

We also recommend making several at once if you can. While you enjoy the first one or two, the others will cure. Then, you get to determine whether there is enough of a difference to warrant the extra care and curing.

The Downside of Thai Sticks

Another reason why Thai Sticks faded into relative obscurity was that they are not an efficient use of marijuana. When you make a Thai Stick, you’re skewering whole buds at once and smoking them together in a single stick. Compare this to a regular joint, where you grind down one or two buds at a time into a finer powder for an individual smoke experience.

Also, you don’t get as much THC per smoke as you do with a regular joint. You can mitigate this issue if you dip it in hash oil, of course, but those looking for a complete marijuana joint experience started to prefer traditional joints or pipes. While Thai weed was strong in the 1970s, American herb matched and then exceeded its potency.

The strains of marijuana that Thai people used were not cross-pollinated, experimented with, or generally changed. They stuck to the same variety. The result was a stagnation in intensity, with relatively low THC quantities compared to Western weed.

This was part of the reason for Thai people smoking Cannabis Thai Sticks. They needed to burn whole buds at once to ensure they got a decent amount of THC per puff. As weed strains began getting more and more complex, with better ratios of THC and CBD and more intensity, American marijuana smokers started moving back towards regular joints and more traditional ways of smoking their weed.

Of course, nowadays, marijuana is a lot stronger, allowing you to make perfectly good Cannabis Thai Sticks at home if need be. These mega-cigars are making a comeback in recent years, and are a viable alternative to joints and spliffs if you want to get extremely high. For the record, marijuana strains such as Green Gelato and Pineapple Kush, are ideal when making a Thai Stick.

21
8 min read
Join The Discussion
TOC
Premium
Your subscription has ended
If you love cannabis and want to support our site, join WayofLeaf Premium today and unlock
Best of all, part of your membership fee will go towards supporting the fight to legalize cannabis.
Sign Up for WoL Premium
Not now
I already have an account
×
Log in to Your Premium Account